You know, having sat through Julie Goodyear‘s eviction last night, I’m left feeling distinctly unsettled today because her presence on this year’s Celebrity Big Brother has raised a big question in my mind. 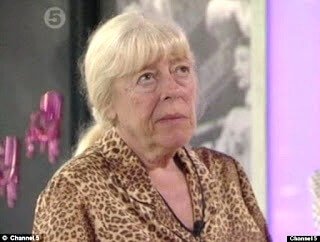 Many people view Julie as a ‘legend’.  Whatever your views on Coronation Street, as Bet Lynch, Julie Goodyear has been a star for over 20 years and you wonder what her agent was thinking when Celebrity Big Brother was suggested.  Leaving the inducement of the fee aside, Celebrity Big Brother is a show that can make or, if not, break then certainly tarnish careers.

There is no doubt that, in the furnace of emotions the house must be, Julie was no saint  – but why should she be pilloried for playing the game she was put in there to play?

But what is the appropriate behaviour and treatment of an elderly woman?  (I’m not even sure I should be using the word ‘elderly’)! Should we judge Ms Goodyear on a ‘level playing field’ across all age groups, or cut her some slack since she is, in her words, a 70-year-old woman who is registered disabled?  Do we judge her as a ‘nana’ or as a shrewd and experienced woman who can spot another game player at 50 paces and make mincemeat of them?  Was there a slight whiff of ageism?

Often Julie came across as an elderly lady totally bemused at her situation, breathlessly (literally) trying to befriend and gain acceptance. Other times, she was the sharpest tack in the box, running rings around The Situation and Prince Lorenzo in their fruitless quest for a position on Danica’s wishlist. Julie  is, as she says, “quite a good actress”

Harvey, Ashley and Michael (or HAM as they so maturely branded themselves) were quick enough to adopt Julie as ‘nana’ – probably anticipating that her star status would be likely to carry her and, by association, them, to the final.  As soon as it transpired Julie had a keener brain than they gave her credit for, the tables turned.  Led by Harvey, a man who has taken having double standards to an art form, the bitching became Machiavellian.

If we think of Julie as ‘Nana Julie’ then the ganging up by other housemates was unpleasant.  The man who comes out (no pun intended!) best in all this is Julian Clary who, despite being viewed by Samantha Brick as a misogynist, seems to me to be a gentle soul with everyone’s best interests at heart. Ms Brick’s views on love, romance and the male sex would surely have made her Jane Austen’s best friend.

So my question is this – when I get to 70, will I expect allowances to be made – and if I do – should I? My mother is 73 and I doubt very much whether she’d stand more than a couple of days in the House, let alone want to endure any character assassination – as receiver or protagonist.

And, actually, I don’t want to see the reputation of someone who is arguably part of the fabric of the TV landscape being reduced by a collection of people who, perhaps with the exception of Martin Kemp, have very little to brag about.