“I think that shale may be neolithic” announced The Sybyl, prodding the rain spattered rocks with her hiking pole. It is a Monday morning and we are walking the dogs on one of The Sybyl’s favourite routes. She has several routes, all with a unique mood.

There is Cosmeston (up-beat, slightly flowery, duck-filled and, always a plus, with toilets), Cwm George (beautiful, silent, noble, containing an Iron Age fort – and near toilets (my own) and Bendricks Beach (bleak, windswept, rock-pooled and moody – absolutely no toilets).

The battered red van is parked up in a hedge so tightly that I nearly have to extract a blackberry from my eye. We have brandished our poles and released the dogs, Rumpus and Bedlam, to shout excitedly at the scrubby coppice we have to traverse on our way down to the gloomy beach. 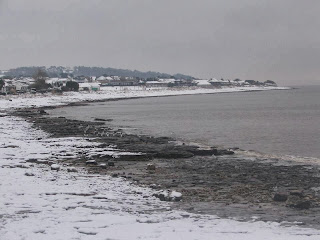 We pick our way cautiously down to the shore, chatting all the while. We run through our standard checklist which, since we are both around the age of 50, usually involves discussing those of our acquaintances who have suffered an untimely early demise and then a comparison of ailments. Most of the ailments are mine and most of The Sybyl’s medical advice involves i) shutting up and ii) getting on with it.

The rain, which I term a heavy shower and The Sybyl terms “light drizzle” is getting heavier. We park ourselves on an outcrop of rock down on the sand whilst Bedlam chases the ball with excitement and Rumpus sits with the expression of a dog who wishes he was back in the van with his duvet. I wish I’d brought a thermos, or a hip flask with Stones Ginger Wine laced with a nip of something Scottish and peaty. The Sybyl is yearning for tomato soup perked up by the addition of melted cheese – like a fondue for truckers.

I wonder, not for the first time, what other women of our age talk about. We just don’t look or feel our age. Next year I will be 50 and I feel about 13.  On a good day. We have the same preoccupations, the same insecurities.  Does our brain ever catch up with our body? I am reminded at this point of the great moment in Mel Brooks’ “Young Frankenstein” where the doctor asks Igor where he got the brain for the monster and Igor replies, the jar said “Abbie someone”. “Abbie Normal”.

The rain is now what I term torrential and The Sybyl terms “a light shower”. I suggest we hasten back to the van. The Sybyl looks at me as if I lack the resolve to get to Base Camp on Everest but grudgingly agrees go back.  On the way back we discuss our teenage wardrobes with a certain degree of fondness and concede that clothes shopping today is quite a chore, no matter what Carol Vorderman says. The dogs are steaming elegantly in the back of the van.

We are soaked through but quite content. There is something about bleak Bendricks beach that is, strangely, enjoyable.  As my grandfather Harry used to say “It’s being so cheerful that keeps you going”.