Late September and the fashion pack are present in full force in London for London Fashion Week. Much to the Inspector’s annoyance, the price of a four night stay in one of the hotels he would usually use whilst working away from home has rocketed to over £2,000. If there’s one thing he hates, it’s paying through the nose so it was time to try an economy hotel.

Billed as “an economy London hotel close to Euston Station in central London”, the Hotel ibis London Euston St Pancras is, as you might guess from the name, handily situated just metres from Euston Station and a 10-minute walk from St Pancras International Station and the Eurostar terminal. Oxford Street and Covent Garden are about a 20 minute walk away or a short trip on the Tube.

The hotel has 380 rooms, all with coffee/tea making facilities and a hair dryer.The front desk is open 24 hours.There is a restaurant and a bar /lounge (although these were practically one and the same in terms of layout). Room service is available, as are laundry facilities.

The Inspector had a twin bedded room on the first floor at a cost of £753 for four nights – approximately £177 per night including breakfast (which, due to meeting times, the Inspector did not unfortunately get to sample!). 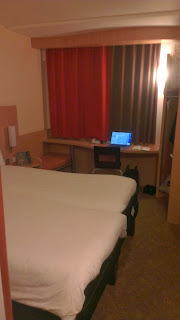 The room was clean, comfortable and perfectly serviceable. The bathroom (a shower in a bath) was adequate. 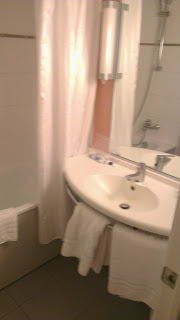 The room stayed in was close to the lifts, however, the noise was minimal. There was a little noise from the nearby railway station but the Inspector sleeps heavily and rarely has any trouble falling asleep quickly.

Now, the Inspector’s criteria for assessing a hotel’s suitability for business use are quite different from my own search for luxury and pampering. He is not concerned with towel softness or branded freebies in the bathroom; he will not lose sleep over lack of chocolates on the pillow or a mini bar.

If I had been staying, I would have hot-footed it over to view the architectural wonder of St Pancras International railway station which is still one of the greatest Victorian buildings in London. I would also have had a peek at the St Pancras Renaissance London Hotel which opened in Spring 2011. And it would be rude not to visit Searcys Champagne Bar which has the longest champagne bar in Europe.

I would take a taxi to Covent Garden to people watch and peruse shops such as Aspinal with its gorgeous handbags or The Tea House where you can buy 70 different types of tea. But the Inspector had time for none of this.

His concerns are more practical. Some of the Inspector’s bugbears when working away from home include:-

but the Hotel ibis London Euston St. Pancras scored quite well on these. The chair provided was quite hard. WIFI access was complimentary, however at low speed.

High-speed internet access is available for a fee. Low speed was perfectly serviceable, however, the Inspector did have problems downloading documents at one point.

Although he did not use them, the hotel has 4 meeting rooms with internet access and parking for 100 cars.

In summary, the Inspector found the Hotel ibis London Euston St Pancras perfectly adequate, clean, comfortable and fit for the purposes of a business traveller.

Note: the Reluctant Hotel Inspector lives with me and, since I adore hotels, has to submit to my endless questioning which, I figure, you might find interesting too.

Disclosure:  this is a completely independent review and no payment was received for this post.