It’s been quite a while since I got to see what I’d term ‘proper theatre’. We’ve taken the kids to see CBeebies shows with all the lights, dazzle (and merchandising!) in the Motorpoint Arena. So it was a new experience for our two to sit quietly in a darkened auditorium at Cardiff’s Sherman Theatre to watch a piece of dance theatre lasting around 50 minutes in a fun show entitled “Boing”. 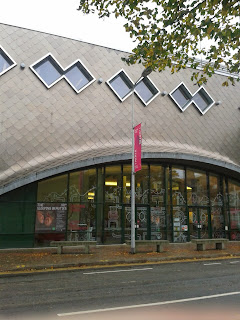 The Sherman Theatre has had a massive overhaul without the original charm of the building being spoiled. The ticket office and cafe bar sit in a bright, welcoming entrance area and the staff were obviously prepared for an onslaught of excited children as they had thoughtfully provided colouring sheets, crayons and dressing up boxes. There was an easel with chalks to practise signing your autograph, a separate play area and a dressing up box with fun props. 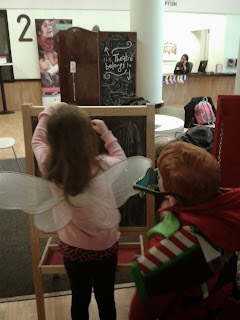 We arrived a good half-hour early for the show so I was wondering how the kids would behave but they really enjoyed the items laid out, especially the dressing up box, and The Husband and I were able to enjoy a very reasonably priced coffee.

We were duly ushered into Arena 2 which is the smaller of the Sherman’s two theatre spaces. The stage was simply set and lit with an enormous bed in the middle of the stage. The stage is at ‘ground level’ with the audience seated on rising tiers surrounding it. This gives the effect of actually being part of the perfomance.

Part of the Travelling Light Theatre Company, the inspiration behind “Boing” comes from director Sally Cookson (an associate artist of the Bristol Old Vic) who wanted to produce an early years piece about going to bed.

The piece tells the story of two young brothers, Wilkie and Joel, who are going to bed to await the arrival of Santa Claus. The theme of sibling rivalry is also woven into the tale as the two brothers fight sleep in their excitement and end up fighting each other.

The two performers, Wilkie Branson and Joel Daniel, who both choreographed the show, skillfully kept the audience entertained throughout the duration of the performance – no mean feat when the audience is primarily comprised of little ones. Boing is a mixture of comedy, acrobatics and breakdance as the boys’ bed become a giant trampoline and even a boat. Caitlin and Ieuan particularly enjoyed the pillow fight sequence and the bit about “Sheet Man”.

The piece captures well the excitement of Christmas Eve and grown-ups and children were all equally able to relate to the feelings of anticipation and the frustration at the length of the night. All the more impressive when you consider that there just two cast members and the only props were the bed, two teddies and two Christmas stockings!

We all had a thoroughly good time and I left with the renewed determination to make more of the Sherman Theatre, which is practically on our doorstep. There is nothing quite like the exhilaration of a live theatre performance.

Boing is on until Saturday 2nd November. Tickets are £7. Performances are at 11 am and 2:30 pm daily.

I’d heartily recommend both Boing and the Sherman Theatre for young families – and there are still a couple more days of half term here to fill. This is a great way to spend an hour. 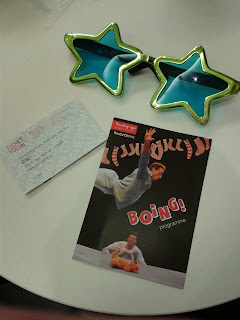