Hmm. Well having just had my 4-year-old son hand me back each lettuce leaf off his plate and having been informed that he hates salad, it’s still status quo here in the battle to get veg and salad into him. Yes, I have a very fussy eater on my hands. 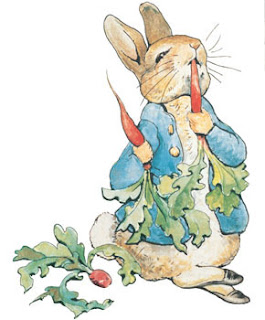 Short of sitting on him, my armoury of psychological tricks is rapidly running dry, save complete disinterest and feigning death (the latter would probably be frowned upon by Social Services and warrant front page coverage in the Daily Mail – “Mad woman’s fake death inspires vegetable binge in toddler” or some such).

The marketing of salad to children has always been tricky. I became vaguely interested at the Tale of Peter Rabbit when his lettuce eating made him sleepy and am convinced that the Magic Roundabout’s rabbit, Dylan, has clearly been smoking some sort of vegetable (I hesitate to use the word weed here obviously).

Other than that, I remember the biscuits in Enid Blyton’s “The Magic Faraway Tree”, the fabulous tea Mr Tumnus the fawn puts together for Lucy in “The Lion, The Witch and The Wardrobe” and the picnic in “Wind in The Willows”. J. K. Rowling could have done an extra service to parents across the land if she’d introduced vegetables into the plot of Harry Potter, although you couldn’t really see Hagrid as a vegan could you?

Caitlin enjoys school dinners and proudly announces each day that she has eaten some vegetables so I am hoping it’s an age and/or control thing with Ieuan. Surprisingly, Ieuan often comes home from school with a “clean plate award” sticker, but he’s always suspiciously hazy about what was on the plate he cleaned.

Even more suspiciously, Ieuan recently had tea with one of his best school buddies and reportedly ate peas, carrots and, (cue my incredulous face), broccoli. I’m not sure what’s going on but I can’t get that quote of Gandhi’s out of my head “be the change you hope to see in the world” because, if it’s true that kids learn by copying I’m not exactly grade a material as a nutrition coach. Or possibly as tough as Ieuan’s friend’s mum.

If I stop and think about it, I’M the true salad dodger.

I’m not a fussy eater but I’ve got into the awful habit of eating the same thing most days to keep my weight stable. I now know to the gram what I can eat and what I have to avoid. I eat the veg which hubby cooks with our evening meal but he is always wading through the ‘veg cupboard’ removing blackened carrots and yellowed broccoli. (Have you noticed that men are generally food nazis when they don’t have to do the shopping themselves?).

I must confess that my staple diet consists of hot cross buns, marshmallows, jaffa cakes, diet coke, Babybel cheeses, curry and red wine. It’s a good job Gillian McKeith has vanished off the radar or she’d be chasing me with a large pointy stick and a poo pot.

My favourite story about Gillian McKeith comes from Nigella Lawson (looking depressingly good in Nigellissima despite chowing down on a vat of lard and cream judging by her recipes). she has named the cupboard in her house where she keeps the cakes, biscuits, crisps and sweets as “The Gillian McKeith”.

Anyway, I’m digressing as usual. But I think I’m the one who’s going to have to have the diet overhaul before Ieuan can be inspired to try a salad. And I’m going to have to eat the stuff. Not smoke it.

Have you got a fussy eater in your house?