Today I had the wonderful opportunity to learn the art of pasta making and Italian cookery skills from the legendary Gennaro Contaldo, one of the BBC Two’s “Two Greedy Italians”, the other being Antonio Carluccio.

A restauranteur, chef and author of long standing, Amalfi born Gennaro has lost none of his passion and enthusiasm for cooking. “I am a cook”, he says,  “but I am a chef when I need to be”.

He is accredited with teaching Jamie Oliver all he knows about Italian cookery and regularly appears on Saturday Kitchen,  BBC One’s weekend food show.

At his masterclass in Jamie’s, Cardiff, Gennaro told us how his philosophy is to make good food affordable and available to everyone.

Gennaro has a particular fondness for Wales because he says ‘all the ingredients are here’, excellent fish, flavoursome vegetables (particularly leeks) and a wide range of fungi (which are a particular passion of his).

Each of his dishes is carefully constructed with health and flavour in mind, for example, gluten-free pasta is now available as a matter of course.

Jamie Oliver’s restaurants have a family friendly ethos (as you would expect from an authentic Italian background) and the children’s menu offers organically sustainable fish fillets organic chicken and sausages.

Fresh fruit or ice cream is available as a dessert for them.

The restaurant is light and airy with an atmosphere which encourages good conversation and lingering over a cappuccino.

In fact, the Husband and I had only eaten there a week or so ago, greatly enjoying the daily special of Slow Cooked Belly Pork.

Funnily enough, I had not had the pasta there, until today when it quickly became clear that I have been over-cooking tasteless shop bought pasta for years!

Gennaro (who incidentally as of 2014 holds the Guinness World Record for the most ravioli made in two minutes, assembling 24 parcels to beat Gino D’Acampo’s previous record of 22), made a batch of fresh pasta with breathtaking speed.

He assured us we could do the same using the simple ingredients of 150 g 00 flour, 50 g semolina and 2 medium sized eggs.  (You can watch Gennaro make pasta here).

Of course, given the number of covers Jamie’s copes with each day, a pasta machine is used for speed but the dough mix is the same. 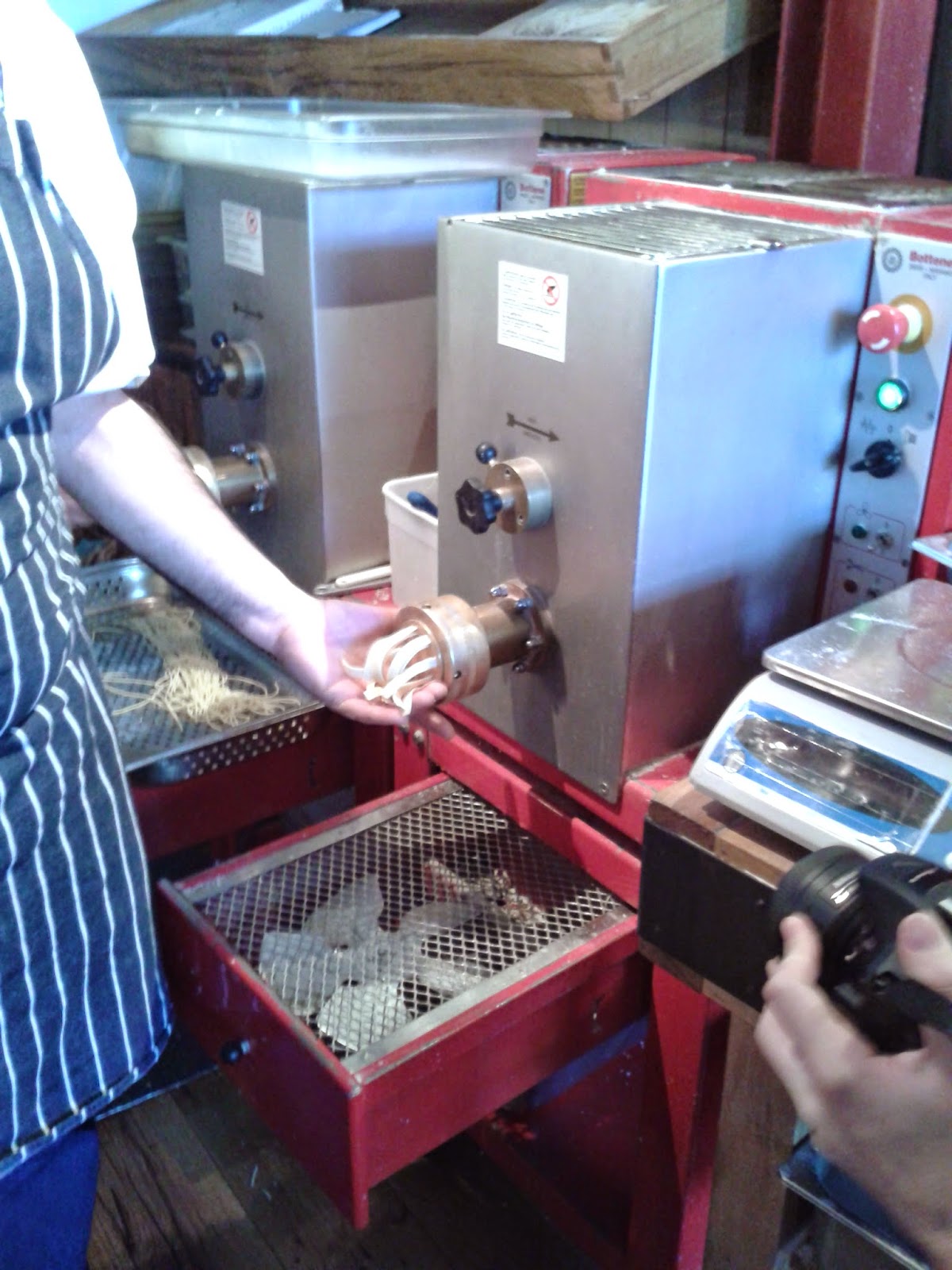 Then it was our turn and I was quite proud of my tagliatelle nest. Much better than my attempt at being a barista at Wyndham Tea Room.

Before we were whisked off into the kitchen, we had an opportunity to ask Gennaro some questions and, of course, mine was a subject dear to my heart, how to encourage children to eat healthily.

Having children of a wide range of ages, from grown up to eleven, and seeing how Jamie encourages his children to eat, Gennaro suggested blending vegetables into the passata for a pizza topping but, in general, recommends creating an atmosphere where children learn to love and appreciate food.

His philosophy is that cooking is a form of love;  we show our children love when we invest in the time to cook fresh, healthy ingredients; to make our own pasta; to sit down around a table and share a family mealtime.

He believes that when we take the time to educate ourselves about cooking, we create a legacy for our children to pass on.

“Imagine”,  he said, “taking your children to a restaurant and them saying, mama, you make better pasta at home”. [Believe me, I was imagining this with all my might!]

Then it was into the kitchen to show his students how delicious, healthy, family meals could be assembled in minutes.  Yes, minutes.

Gennaro created three dishes for us, a tagliatelle with tomatoes, chillis and basil, spaghetti with a trio of mushrooms (button, oyster and porcini) and cod with white wine, pancetta, anchovies, capers and tomato accompanied by crusty bread. 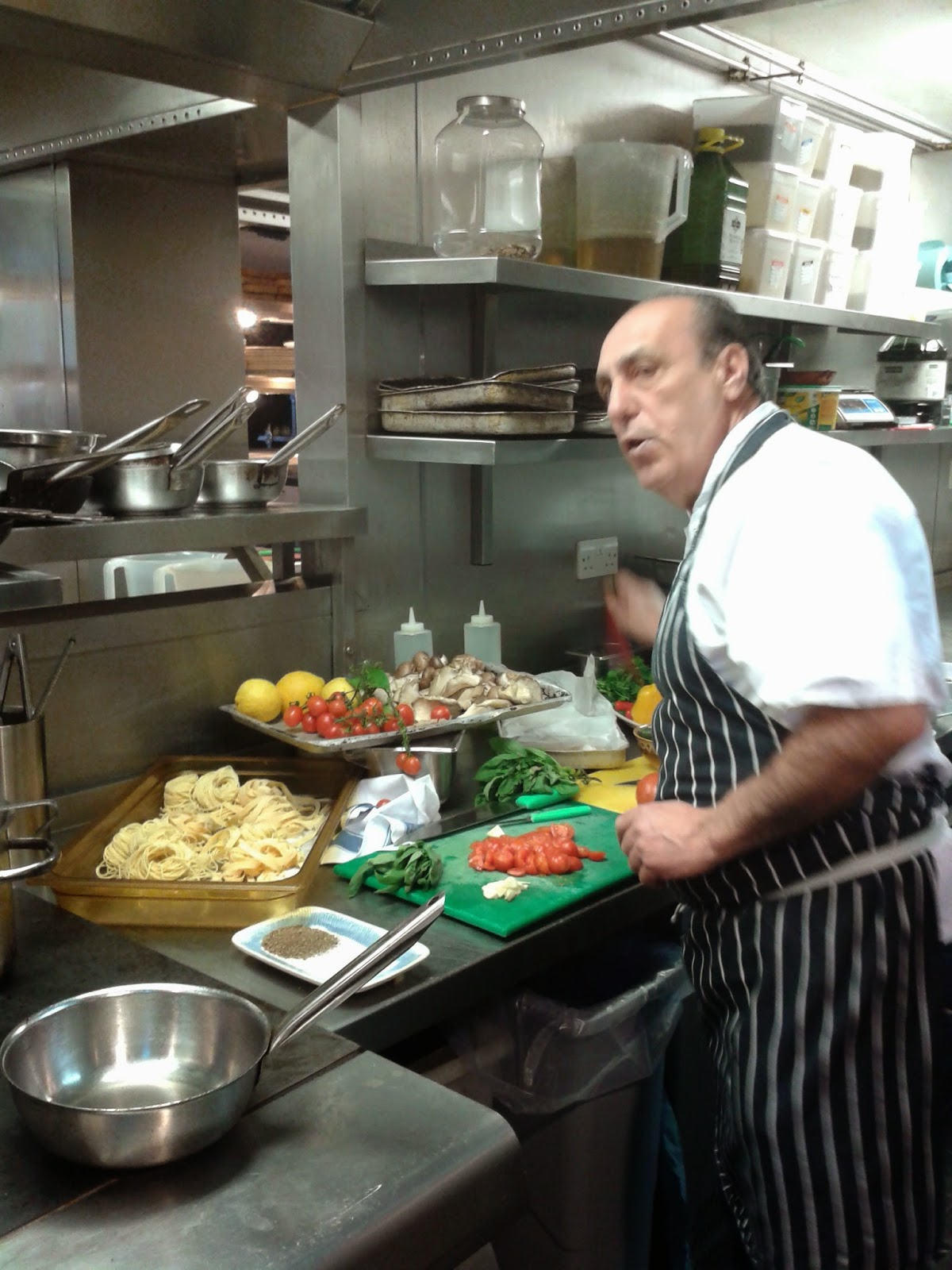 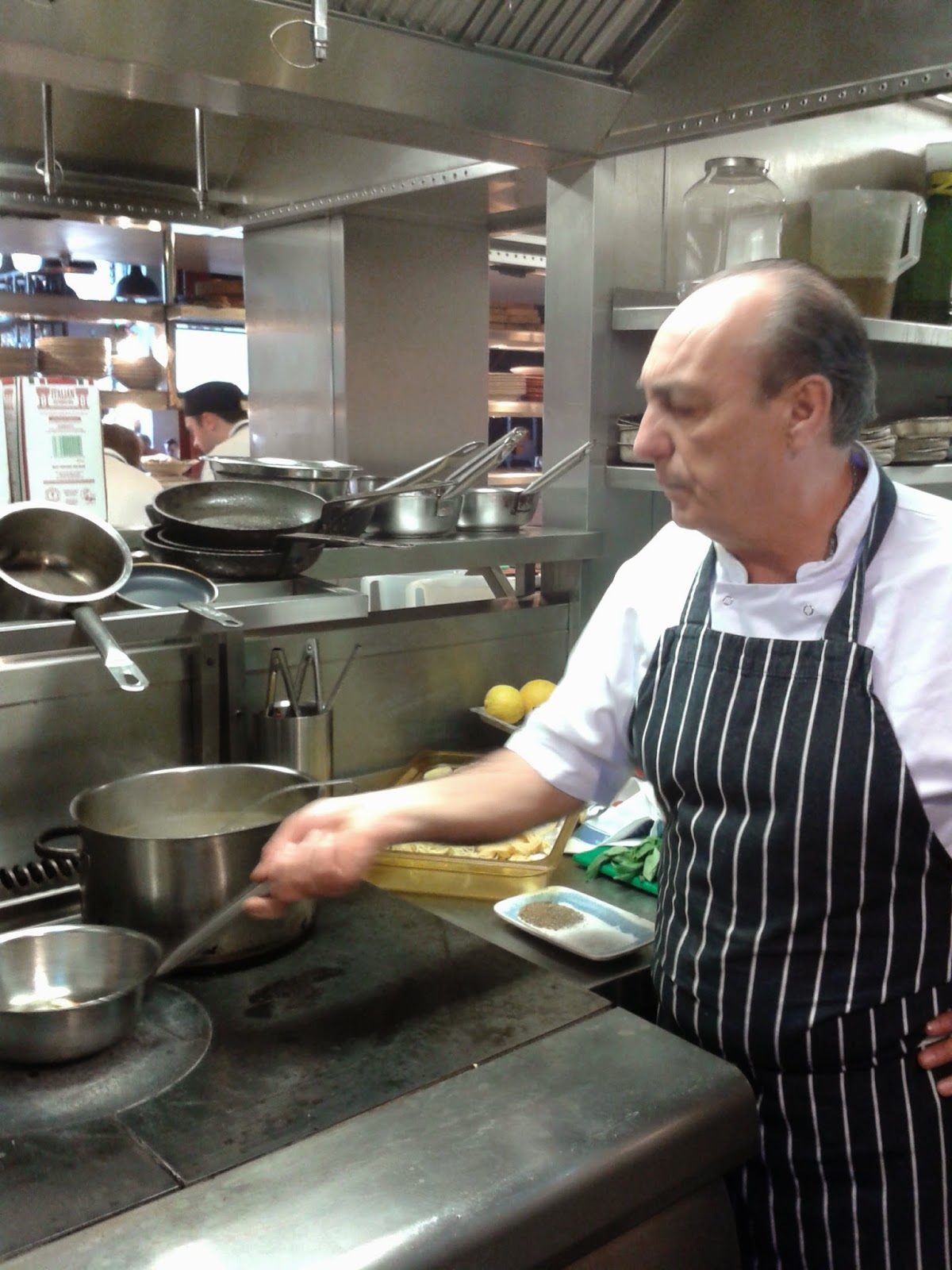 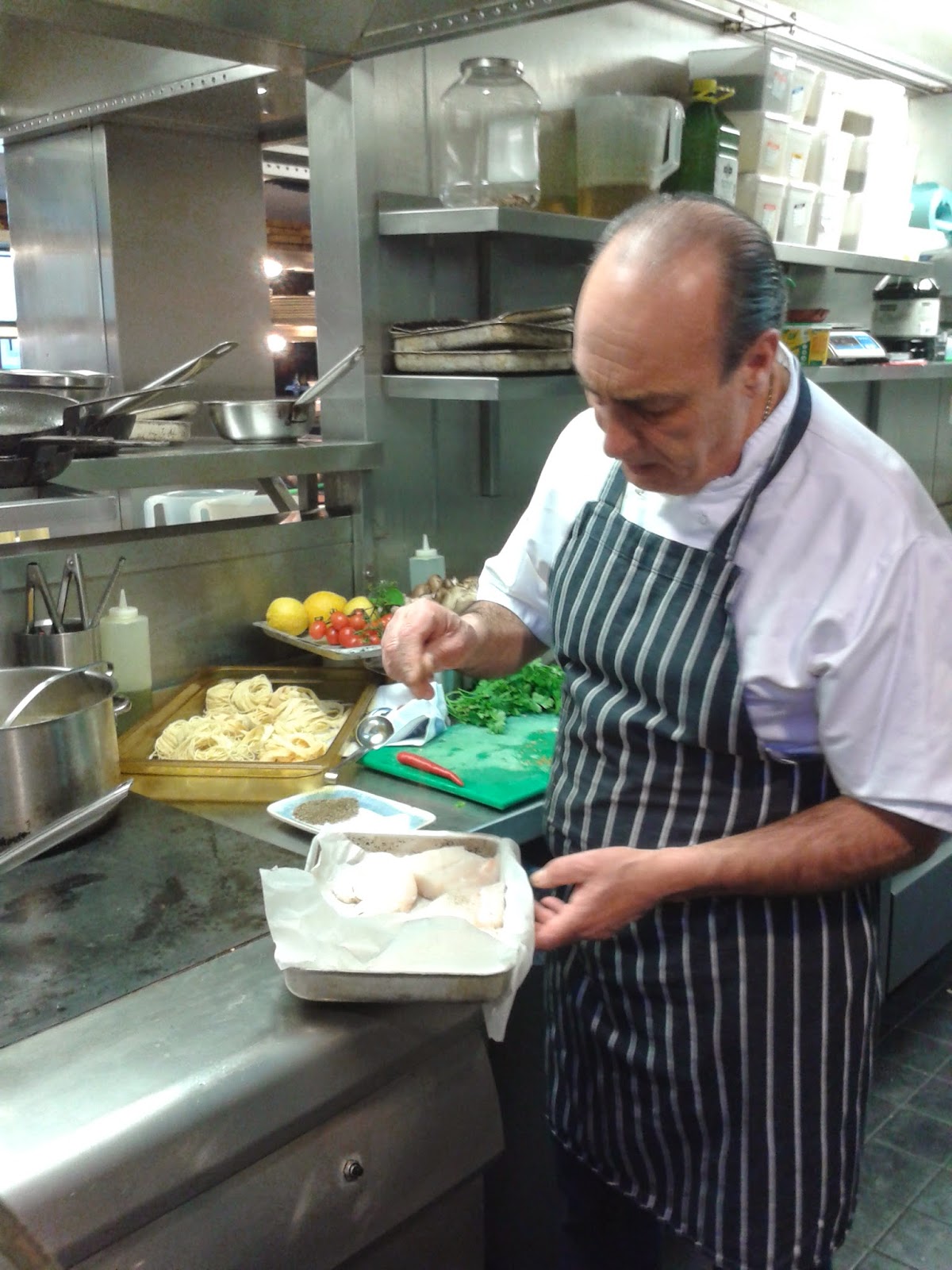 Of course, the pasta was the fresh pasta we had just made.

The restaurant portions served are bigger though, to satisfy the appetite of the hungriest pasta lover. 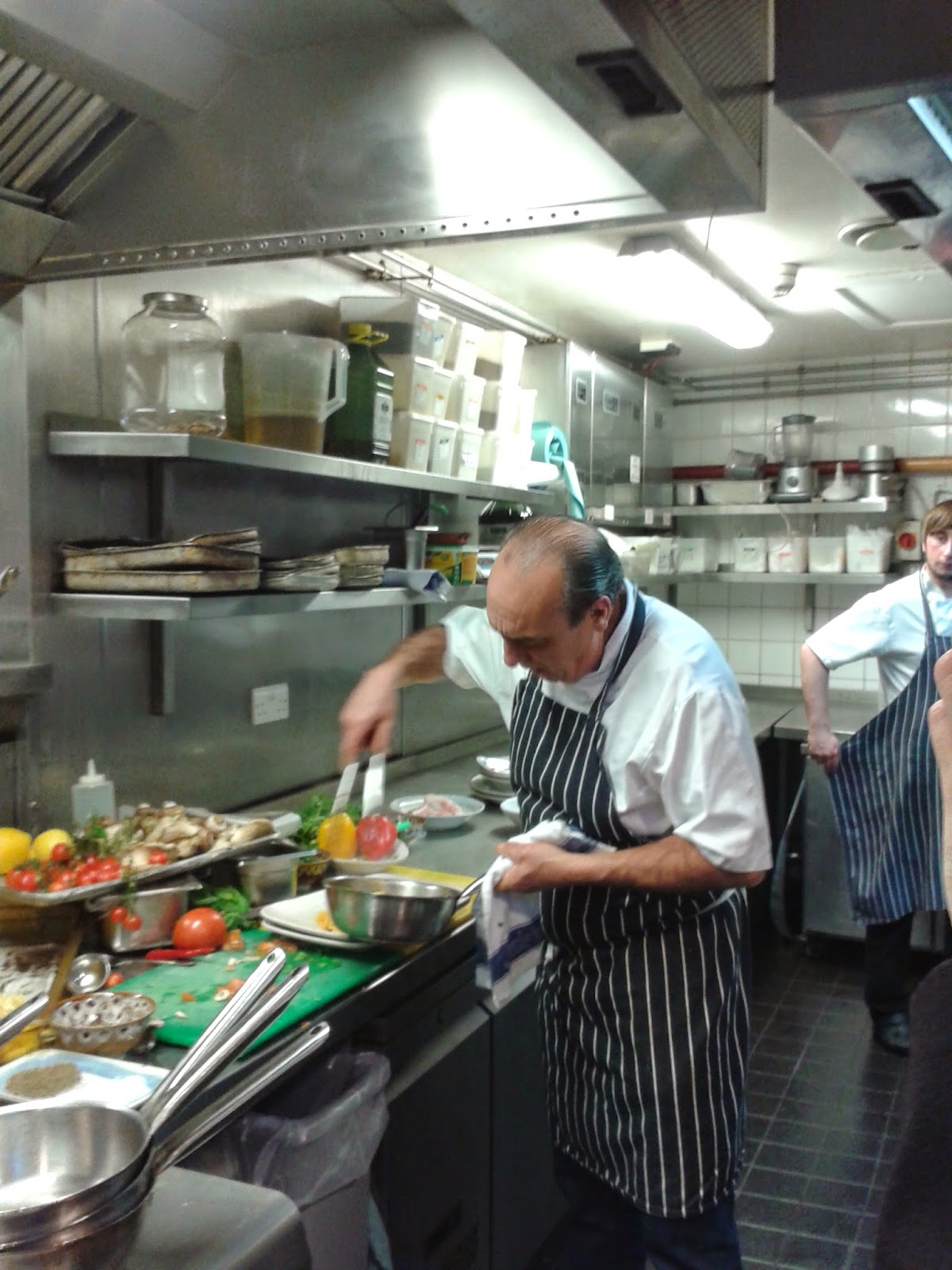 Each dish was full of flavour, whilst tasting fresh and light.

The pasta was served al dente, literally cooked in a couple of minutes (note to self: not boiled to death in a saucepan).

The garlic was chopped into quite generous slices rather than finely chopped or minced – again for its health-giving properties.

The tomatoes were roughly chopped.

The cod was simply seasoned and fried in olive oil for a couple of minutes.

We learned that olive oil should be extra virgin and not to worry about using it because it is much better for us than butter.

Also, tomatoes should not be kept in the fridge.

No idea why I do this but Gennaro says it makes them taste like cucumber.

Then it was time for lunch and it was difficult to know which dish to choose first.

The tomatoes with the tagliatelle were sweet but added a welcome bite,  the mushroom spaghetti was deliciously earthy and the cod melted in the mouth.

Far away from the standard tea time fare of fish fingers and baked beans prone to appear in the Hobbis household and cheaper and quicker to assemble too.

“Have you tried pasta with truffles?”  Gennaro asked, brimming over with a passion for his dishes.

We admitted we hadn’t and within about four minutes flat, he reappeared with yet another tasty dish.

In a way, this dish captures Jamie’s and Gennaro Contaldo’s ethos about good food being made available to everyone at a reasonable cost. Gennaro told us that a comparable dish in London would cost around £45 but here it was around £12 for a main sized portion and £6 for a starter sized portion.

Our time with Gennaro was at an end but as we parted, he reminded me of his philosophy for cooking for children. “When you cook for your children, it’s about love, education, passion”.