Following our safari adventures at Hamleys Cardiff last summer, we were thrilled to be invited to sail the high seas for friend Ruby’s 6th birthday party.

I remembered the welcome haven that was the lovely air-conditioned party room and the fun Caitlin and Ieuan had with Hamleys enthusiastic staff.

Would they be up to the challenge on a Sunday morning?

And a Sunday upon which Wales were playing Scotland and had to pull their socks up after the England debacle too. 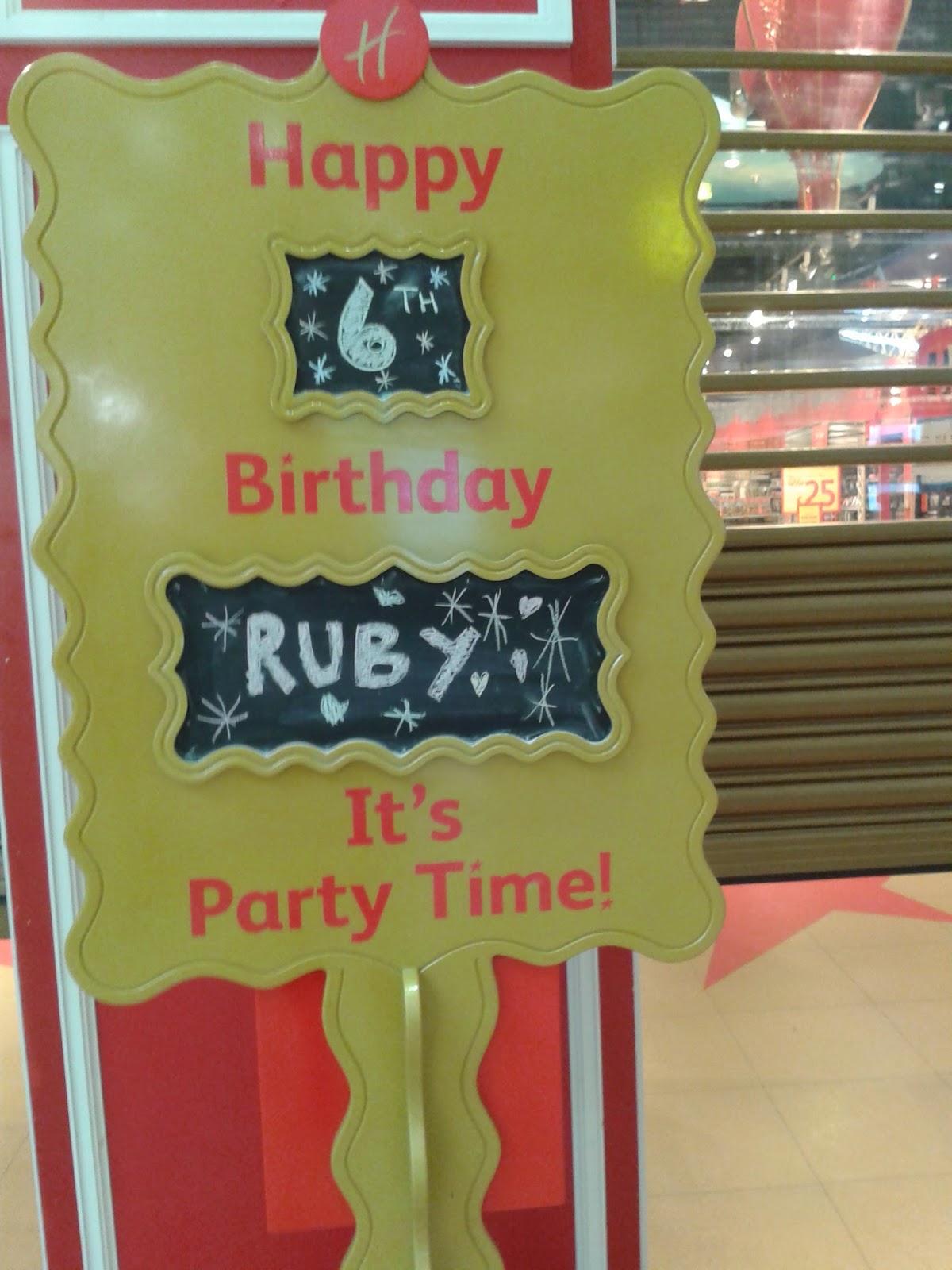 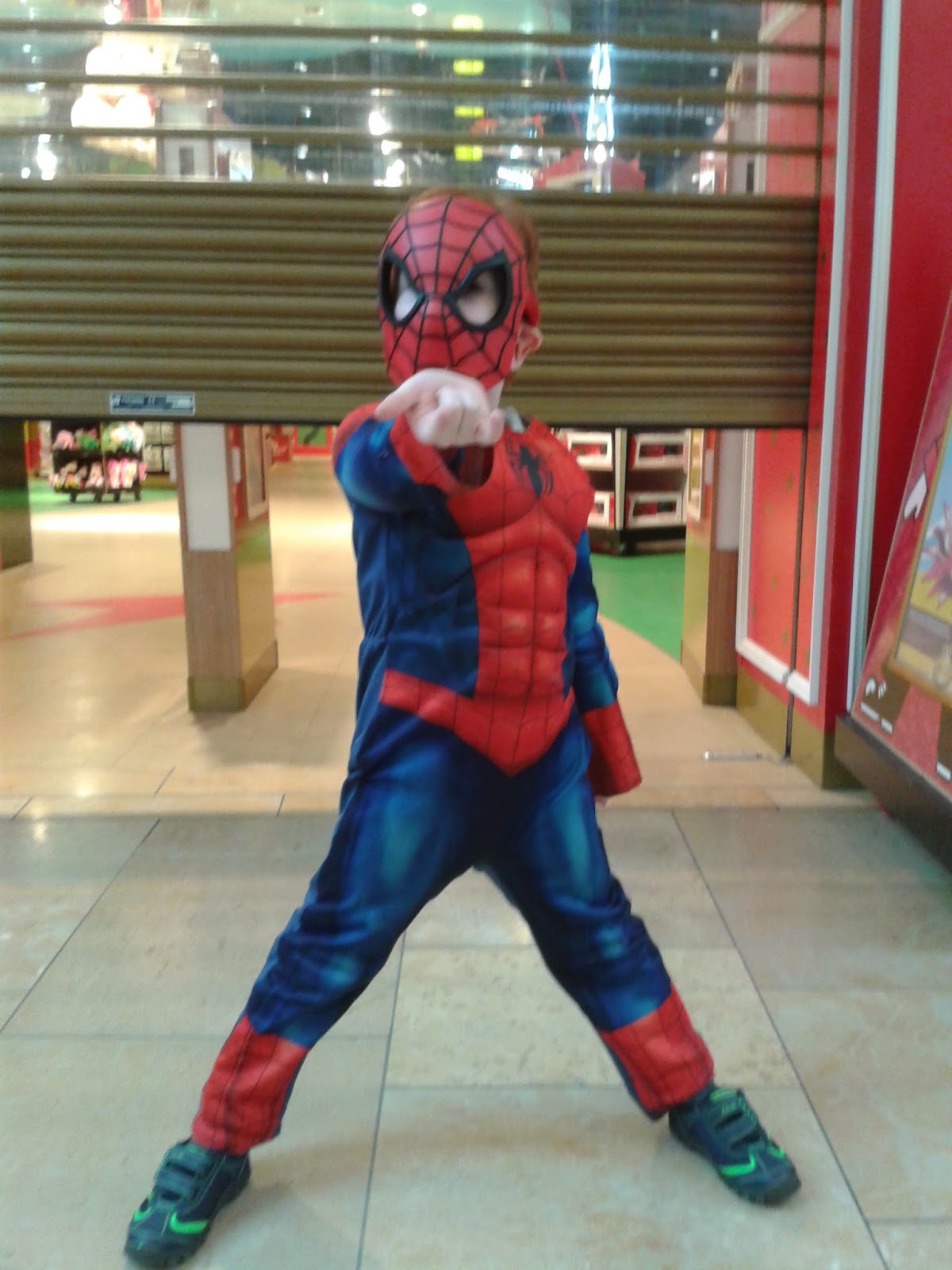 Apparently, Ieuan is dressed in full pirate regalia underneath his Spiderman suit.

We were met by Captain James (who looked suspiciously familiar to me), Princess Seren and Pirate Alex who quickly took charge of proceedings and instigated a photocall in front of the bemused parents and shoppers. 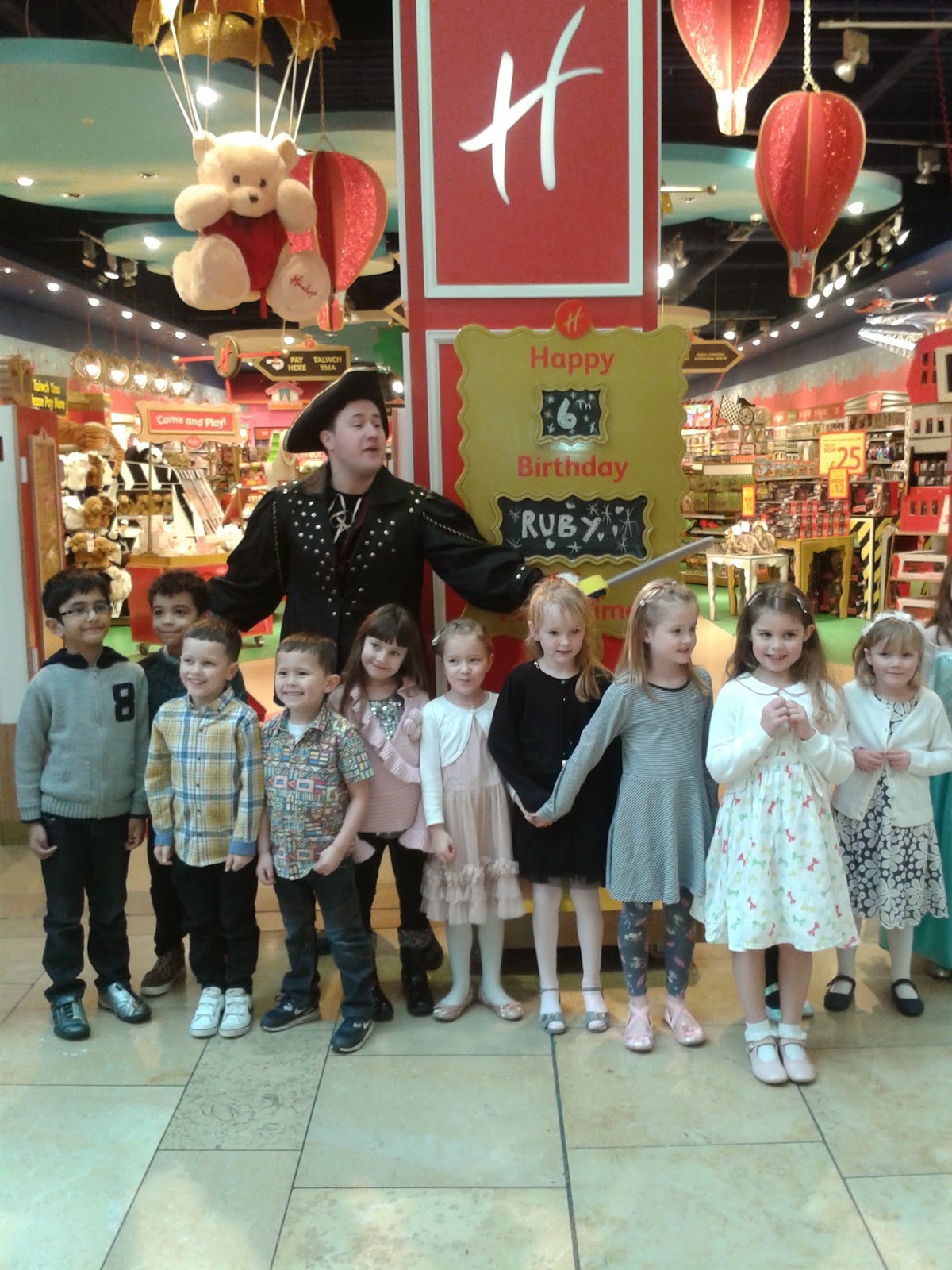 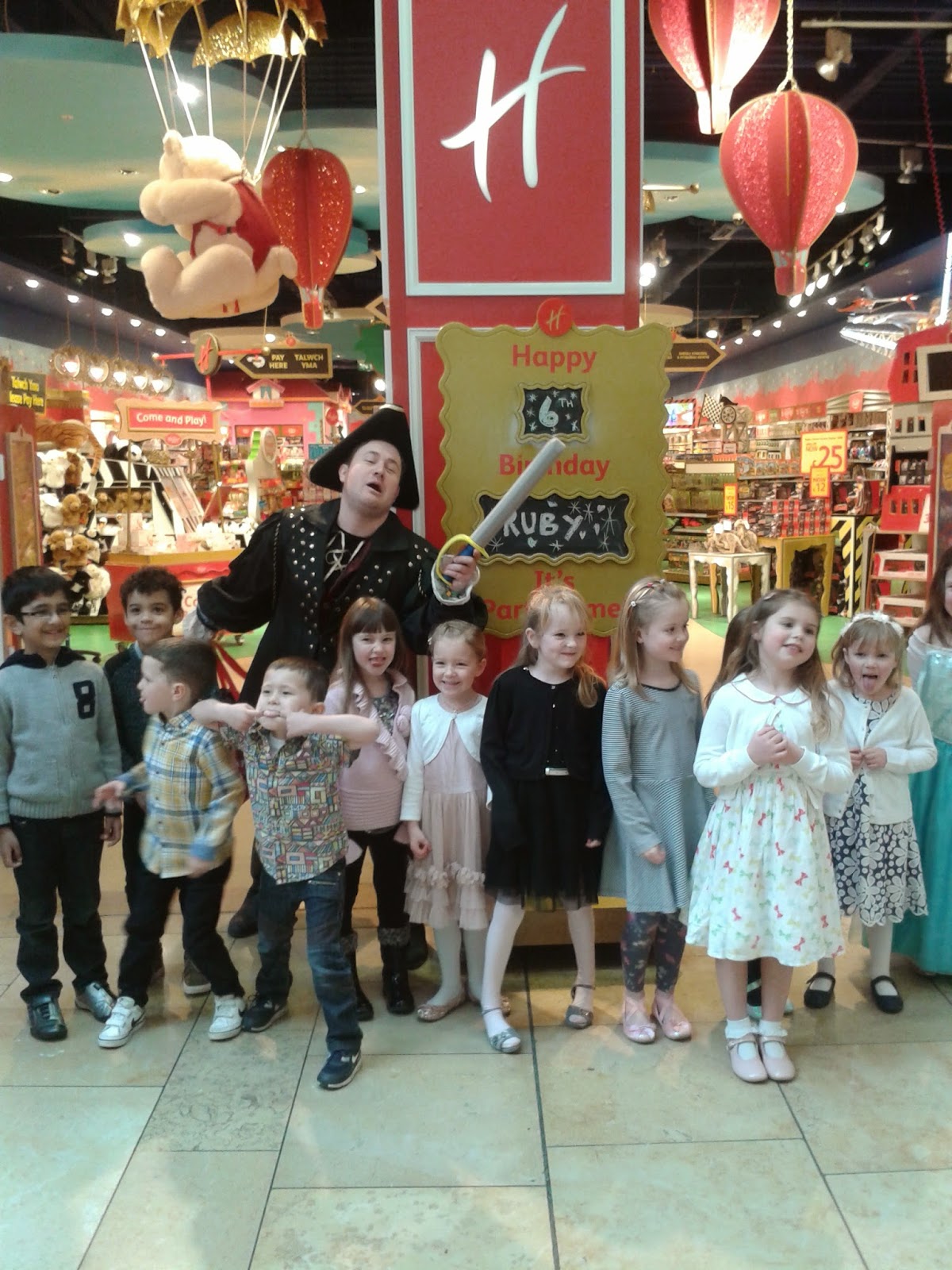 And so it was that 14 children and their (ahem) responsible adults started on a treasure hunt to explore the inner recesses of the store and to find the pirates’ treasure.

Clues had been carefully hidden and the party began their search. 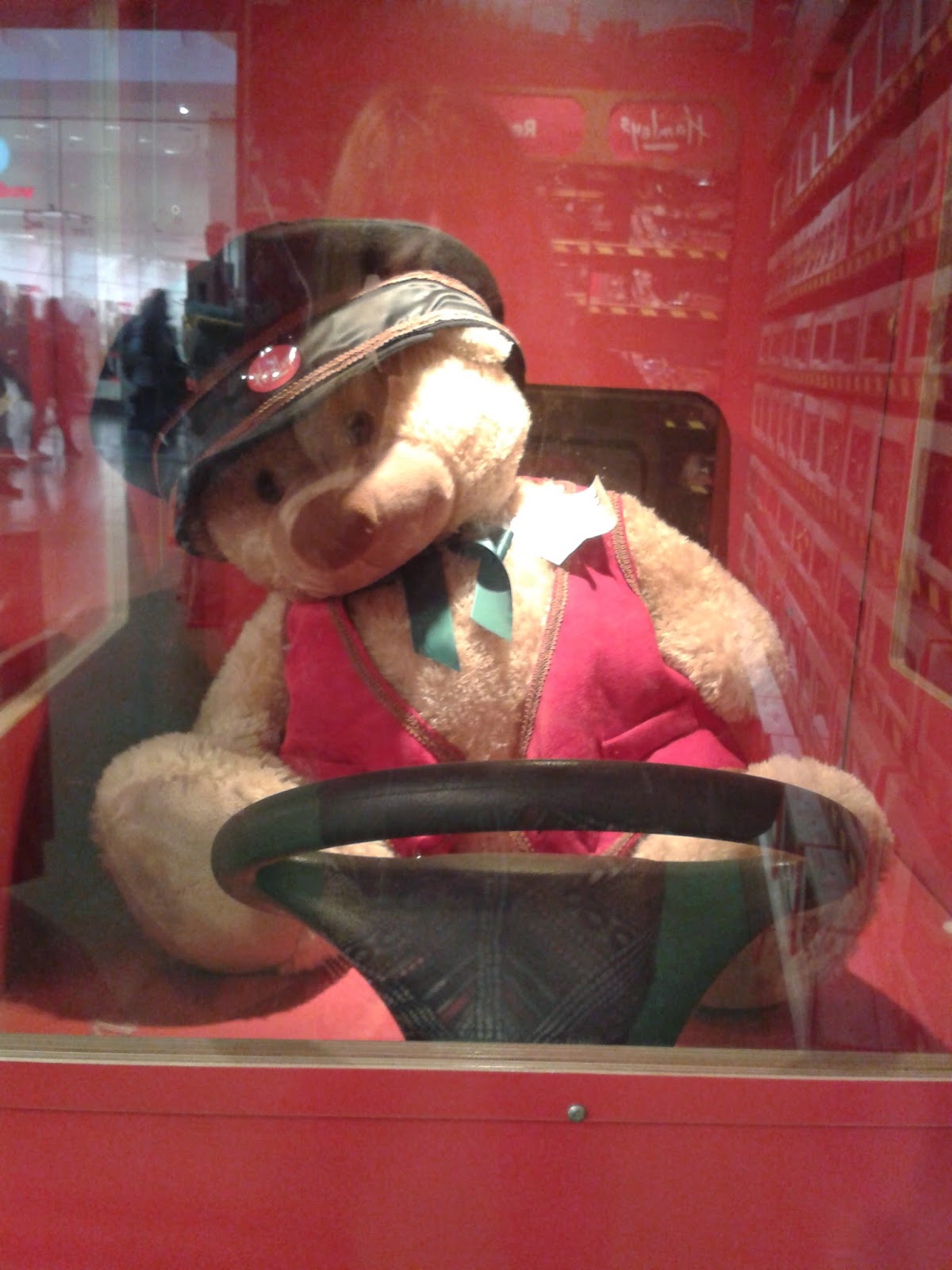 Yes,  the Hamleys bus does run on Sundays 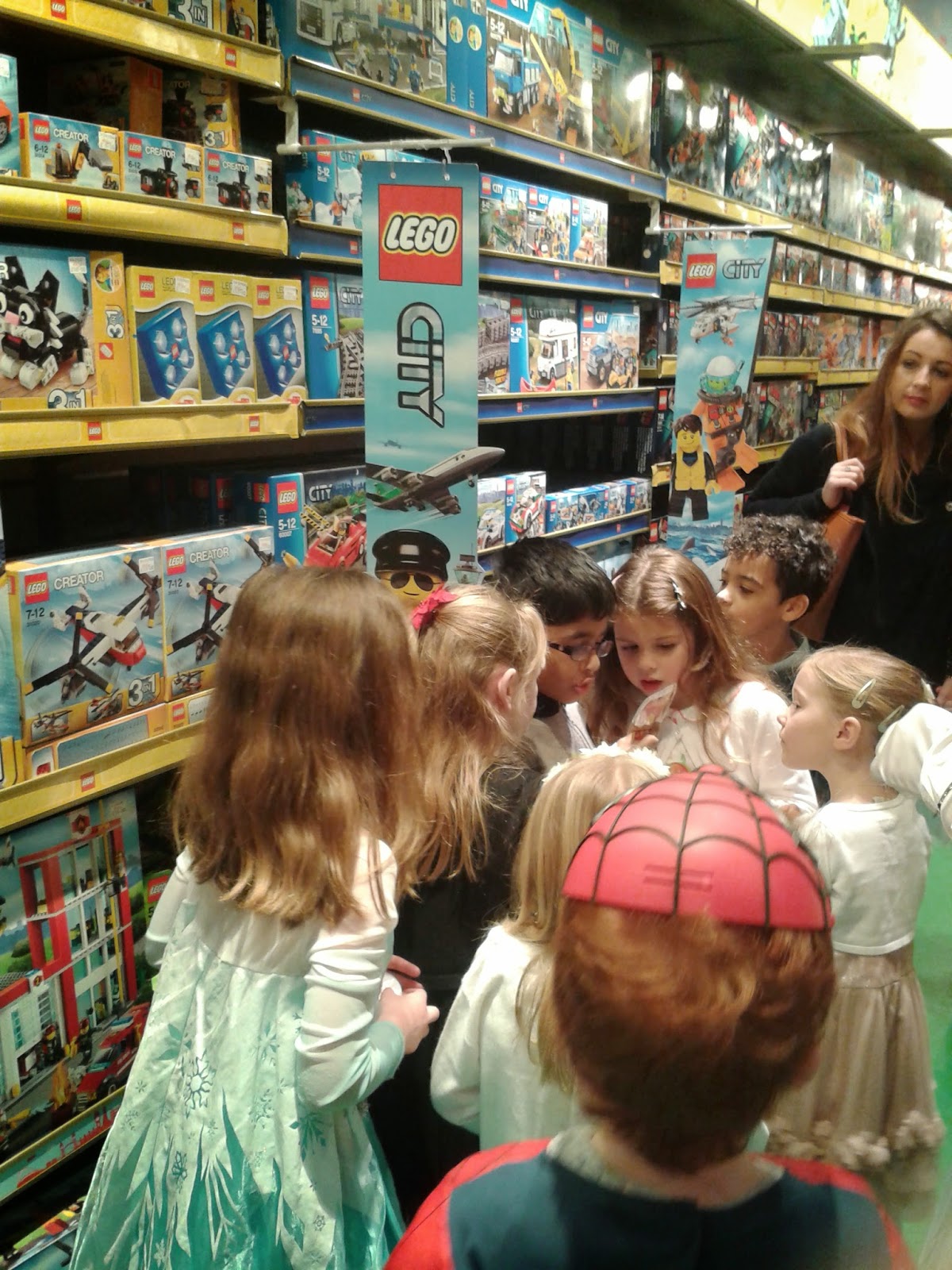 Full concentration was required for the reading of the clue 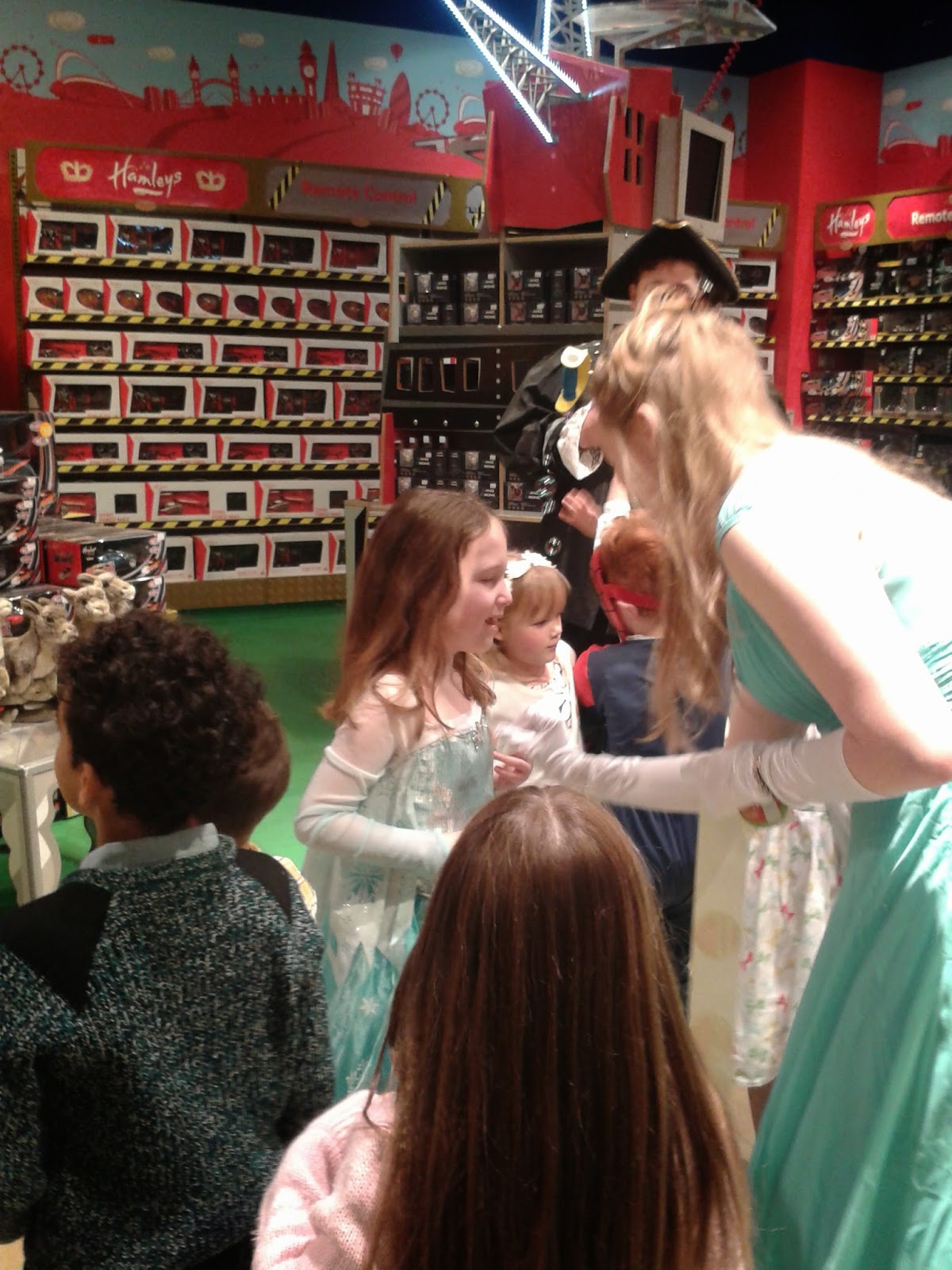 The treasure hunt took us right around the store, passing, en route,  Lego, books, arts & crafts and finally ending at the true location of the treasure, the pick ‘n’ mix display!

Then it was left to Captain James to lead the team in the (somewhat surprisingly for pirates), application of the glitter tattoos, before heading off to the party room with the treasure. 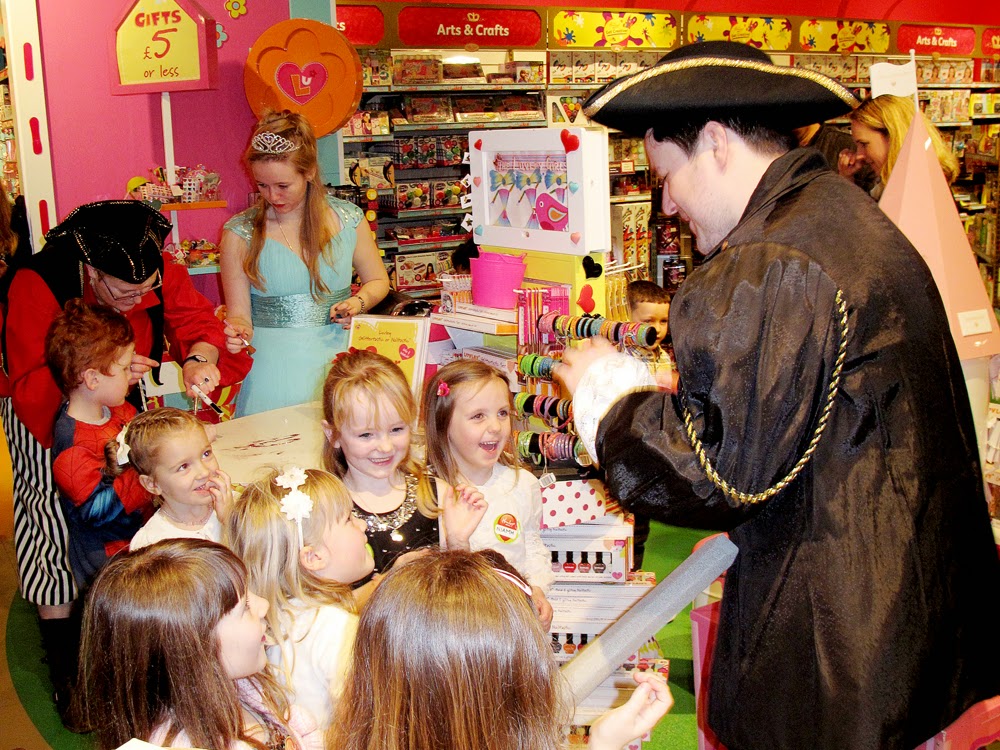 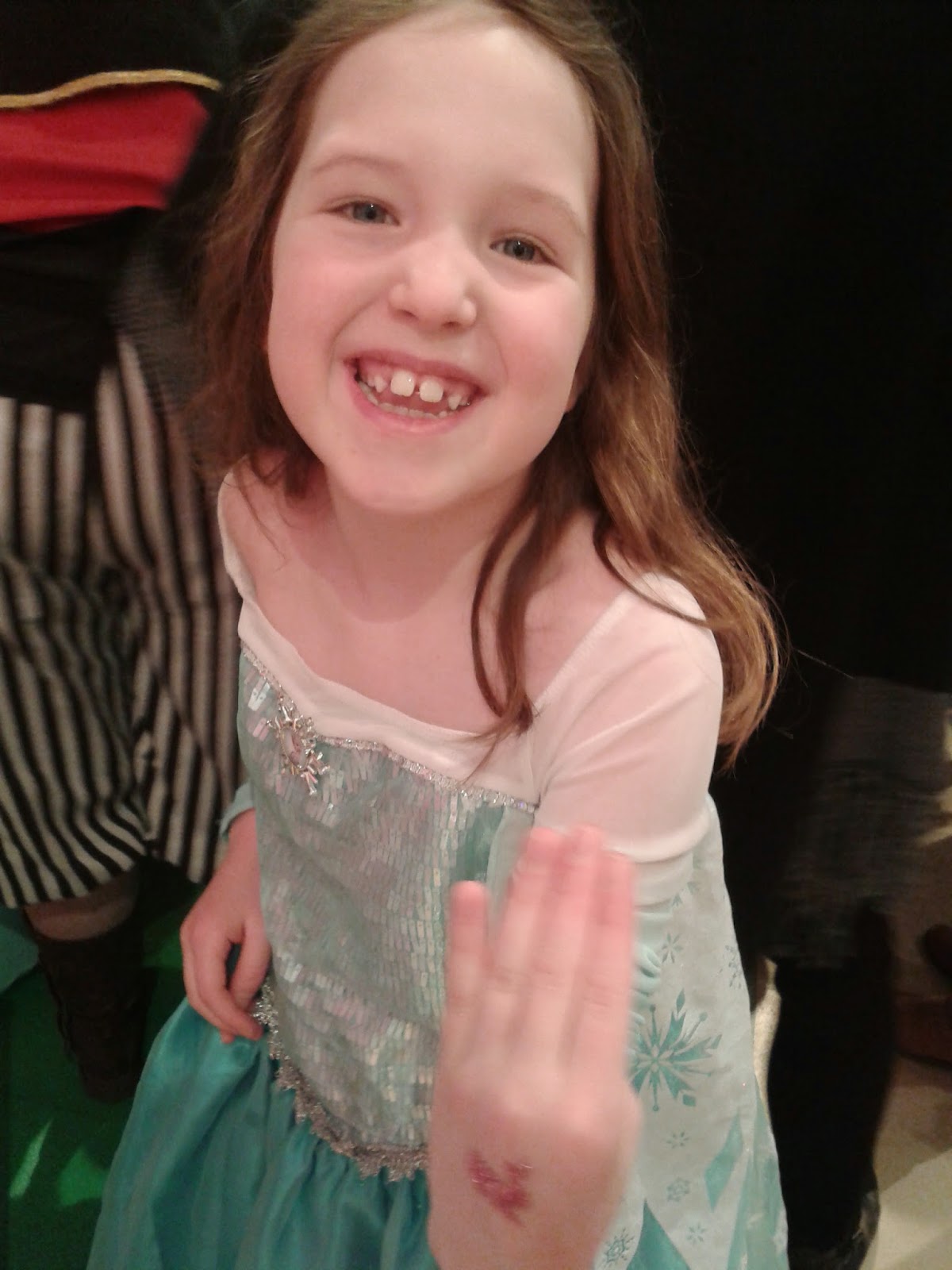 Nothing makes a girl happier than a glitter rabbit tattoo 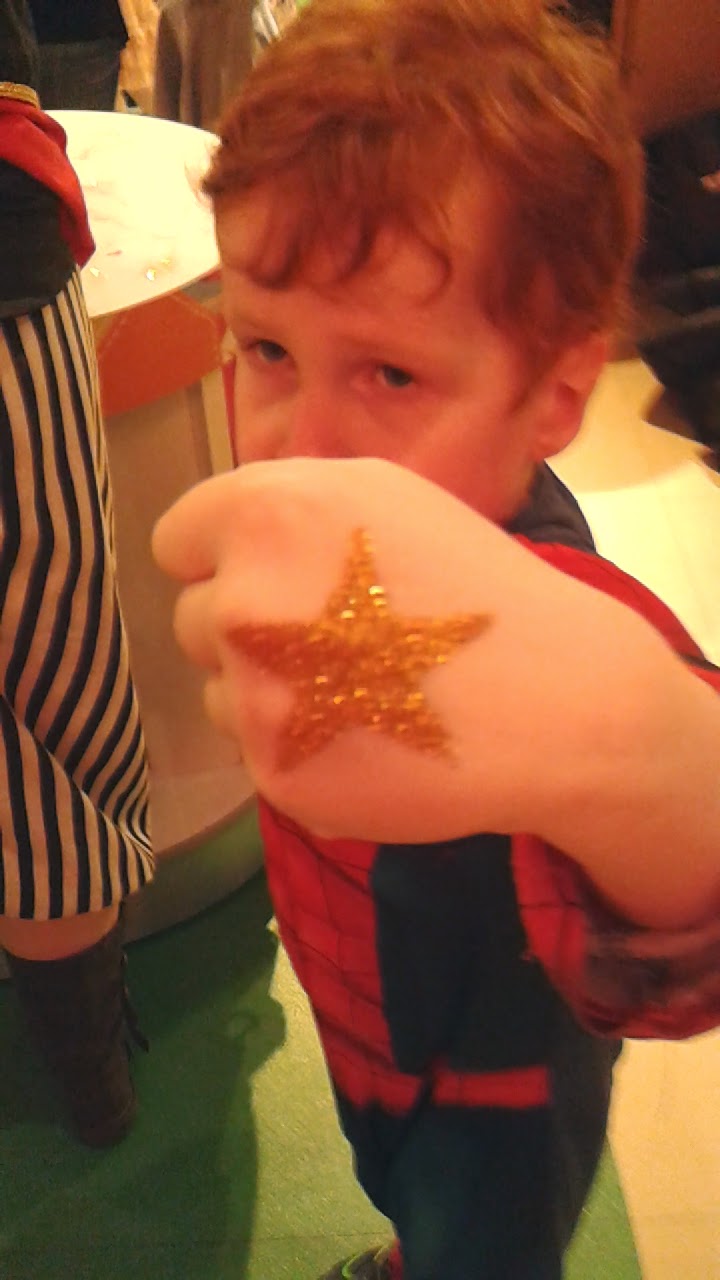 Whilst the kids were being tattooed (a possible programme concept for Channel 5?),  I took the time to peruse the store and to reminisce about being in the London flagship Hamleys store in the ’70s and the strange bubble-gum paste you could buy there which created balloons when inflated by a small plastic tube.

That was if the smell of the paste hadn’t knocked you out first. 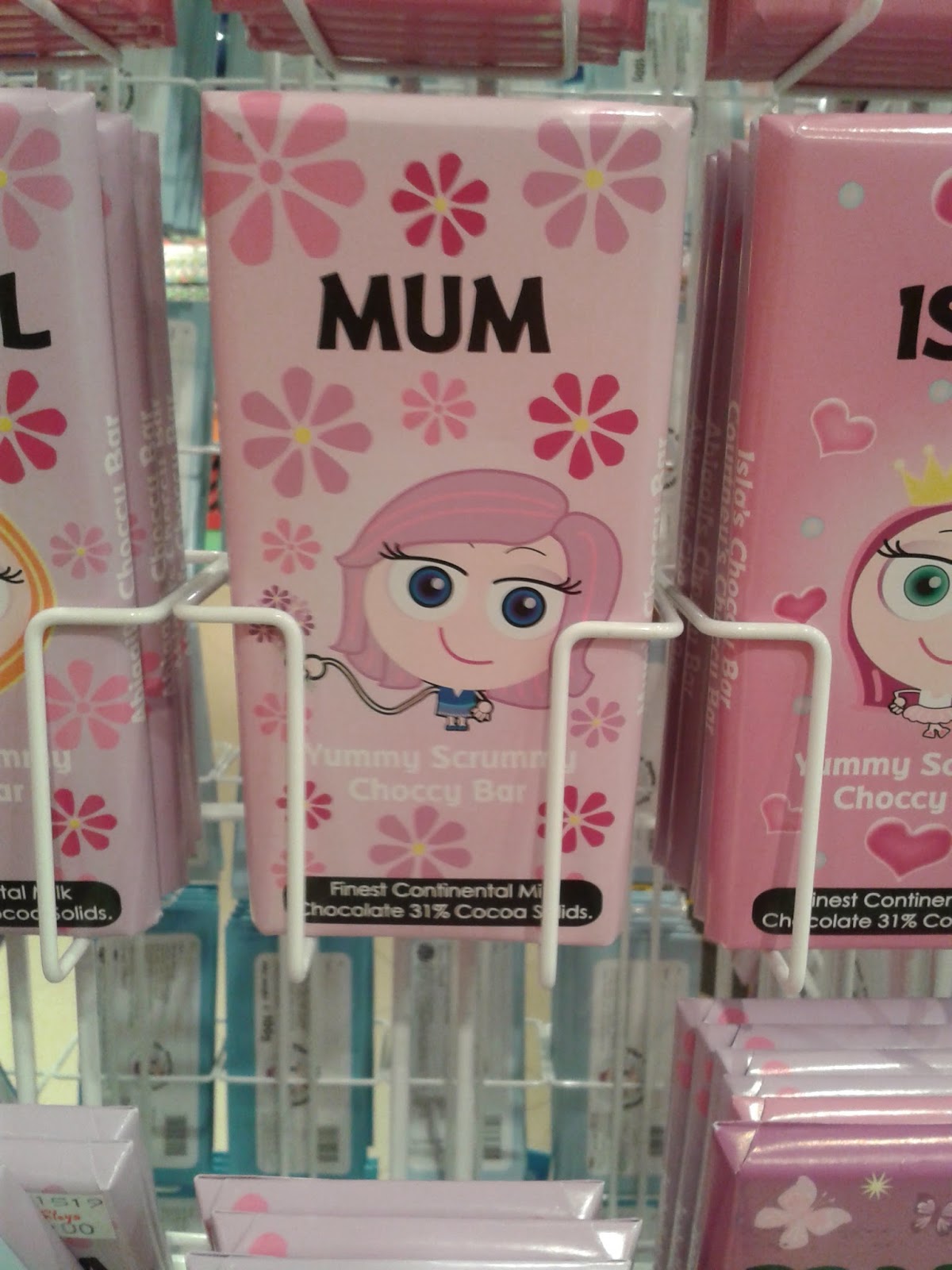 The party room was set up with a table and one or two furry guests.  There was a fabulous pirate themed backdrop behind the table.

There were sweets, drinks, crafts and the obligatory DVD of Frozen playing on a raised screen on one wall.

There was a dance floor lit by a light display in the shape of an inverted birthday cake and soft bean bags to relax on.

The room is air-conditioned and there is a toilet adjacent to the party room suitable for disabled use.

After a session of colouring and badge making with Captain James, whilst Princess Seren and Pirate Alex carried out face and nail painting, it was time for some party games. 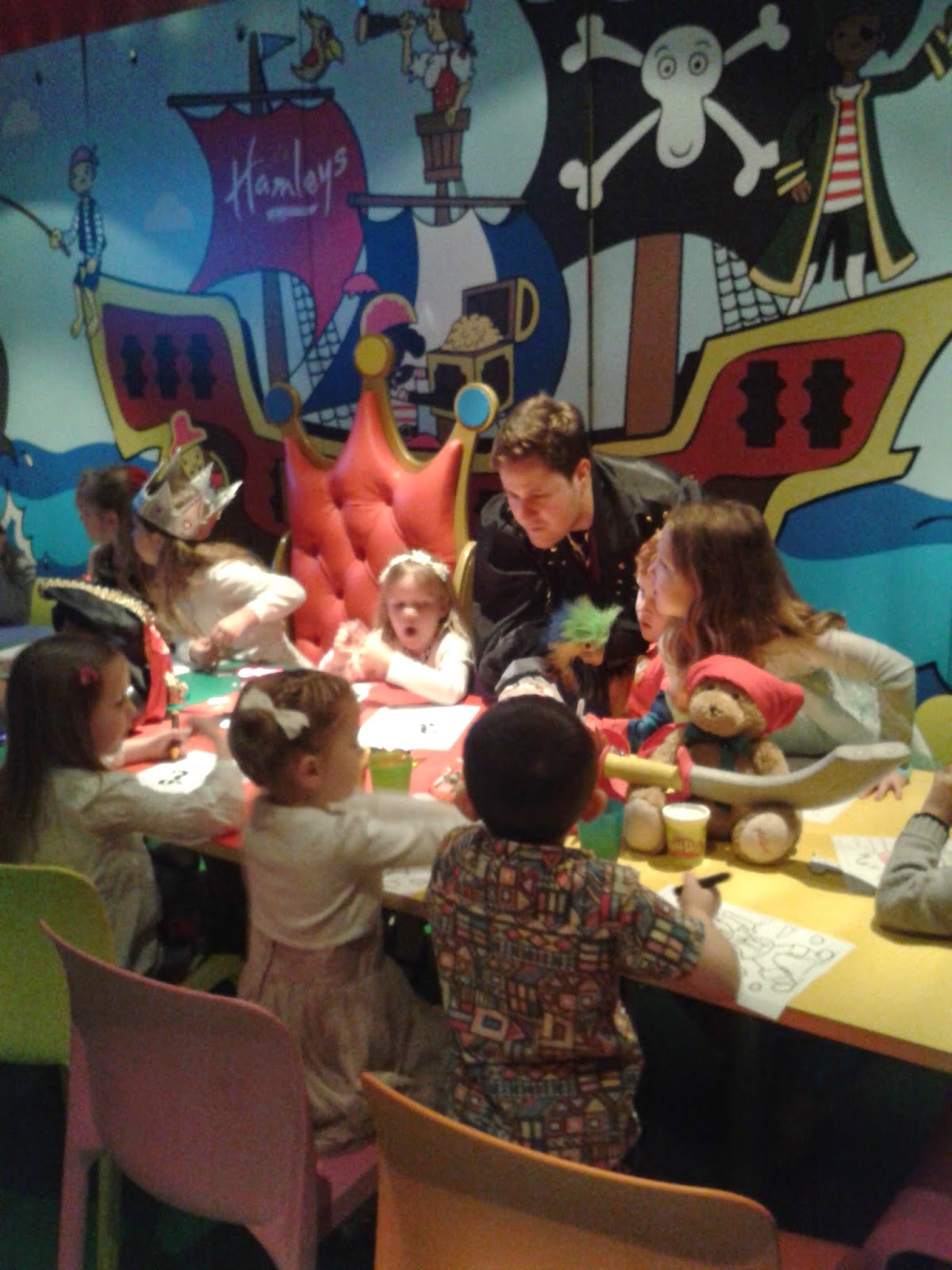 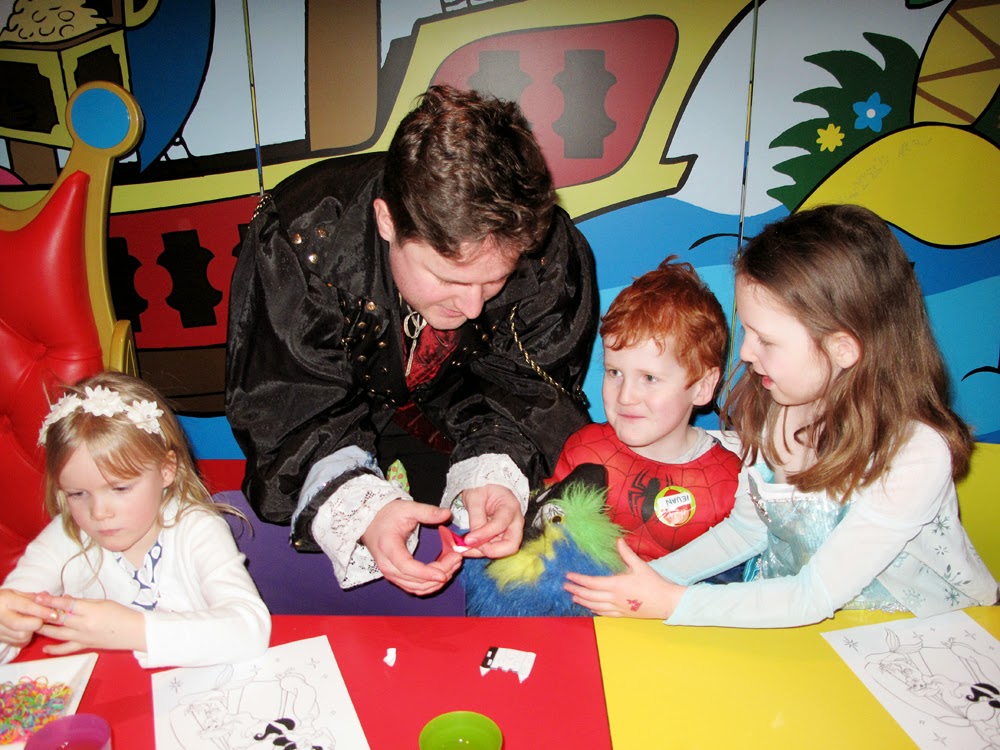 and the badge making… 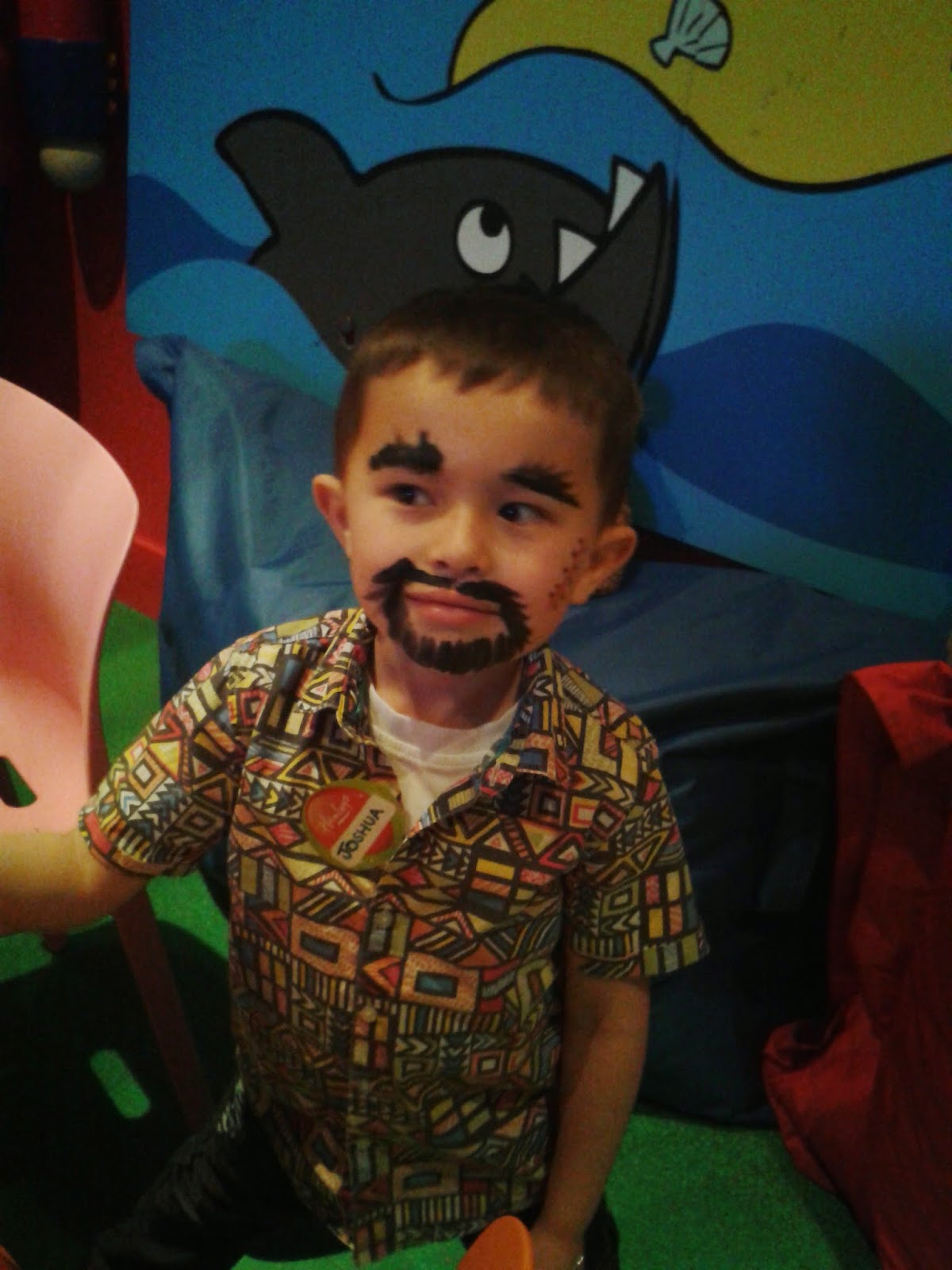 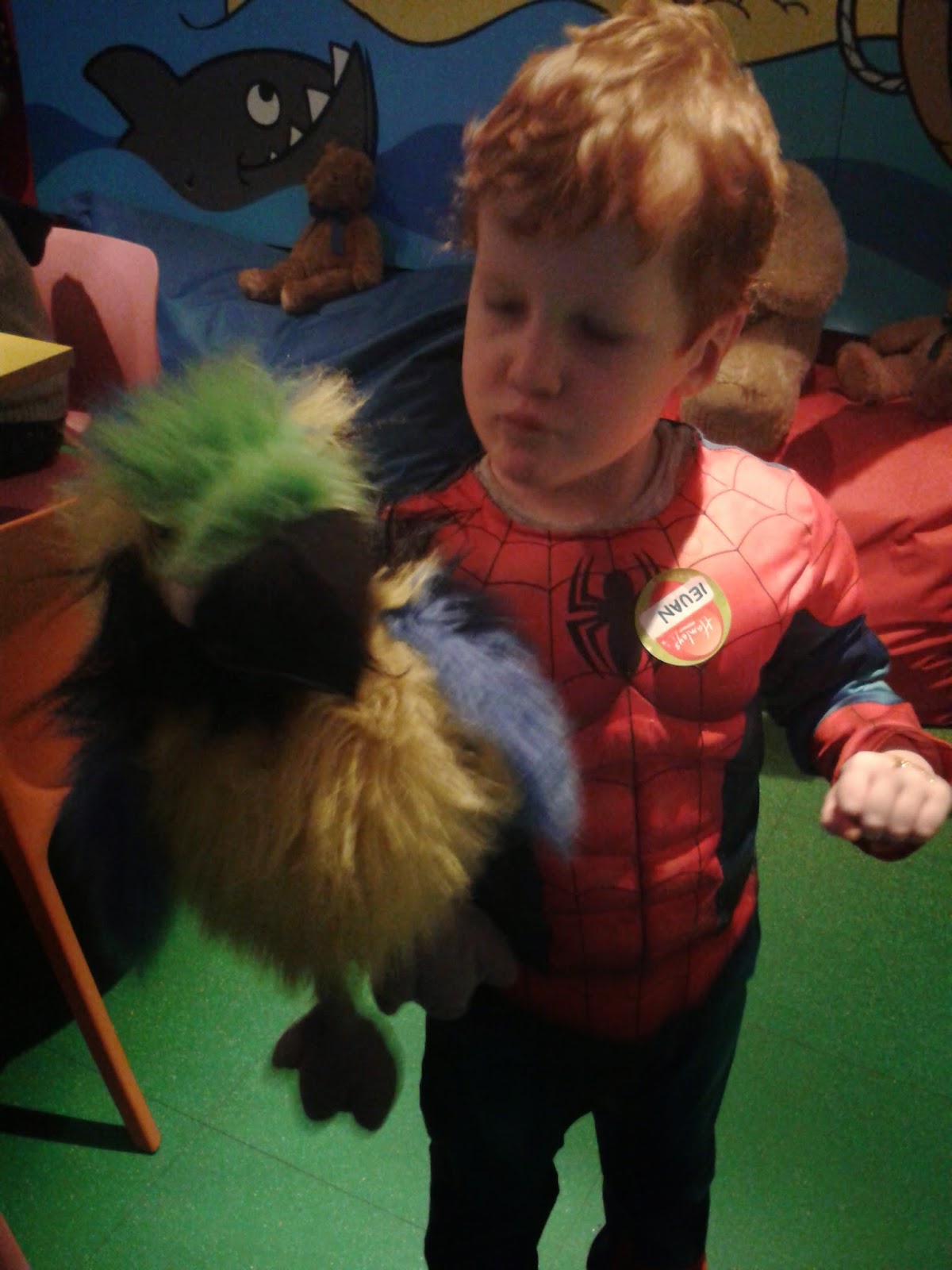 There were musical statues and musical bumps (Gangnam style, naturally), Pirates Footsteps (in my youth it was “What’s the time Mr Wolf?”) and Duck or Goose (which I still haven’t grasped, but which involves much hectic running and whooping).

The Hamleys team had soon rendered the children exhausted and held an impromptu relaxation session before the food arrived. 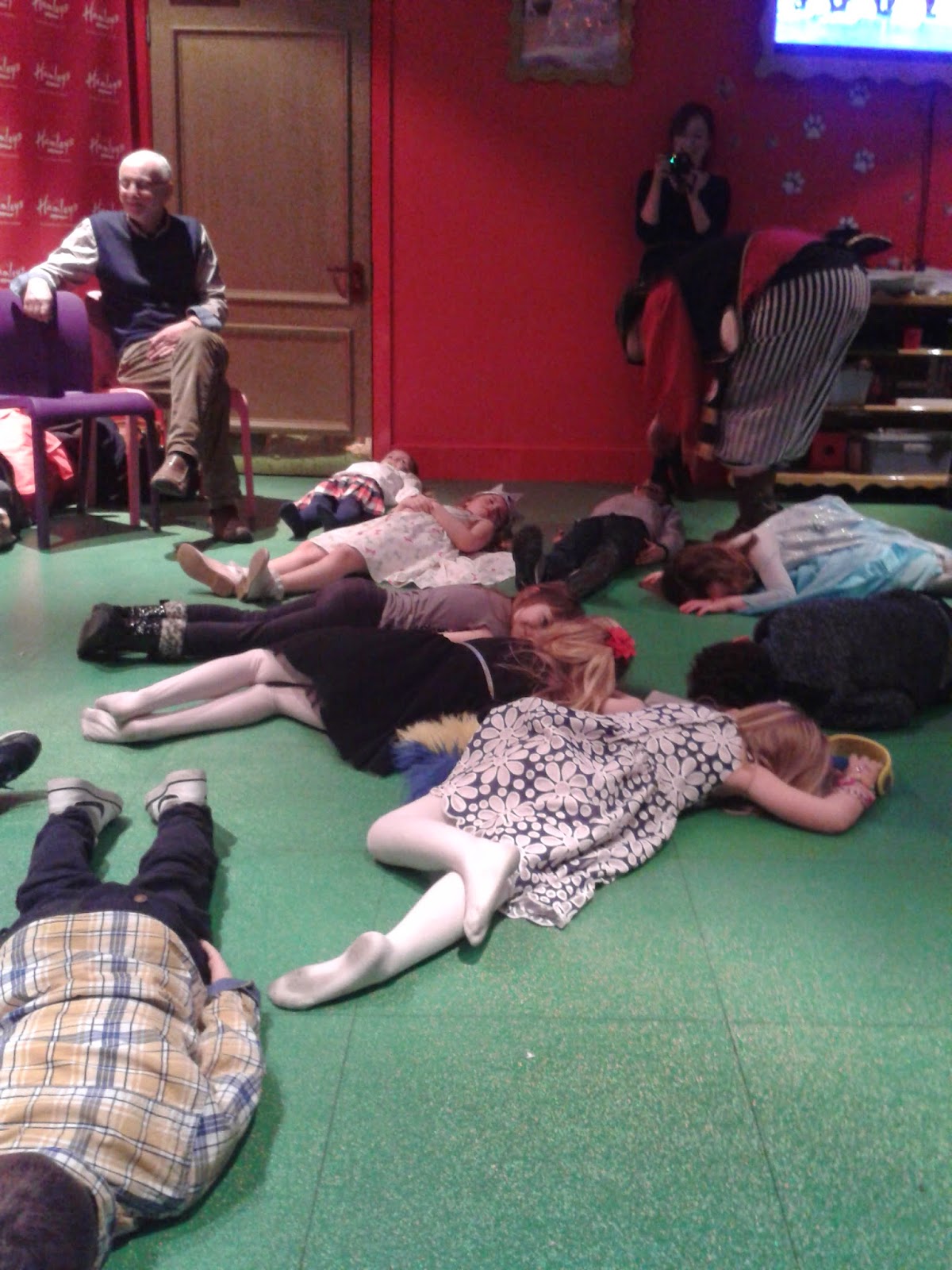 What voodoo is this?

Happily, the children revived in time for the food (supplied by nearby Ruby Tuesday) and a beautiful Frozen themed cake (supplied by Hamleys).

There were mini burgers, chicken wings, fries and favourite party fare such as chocolate fingers. 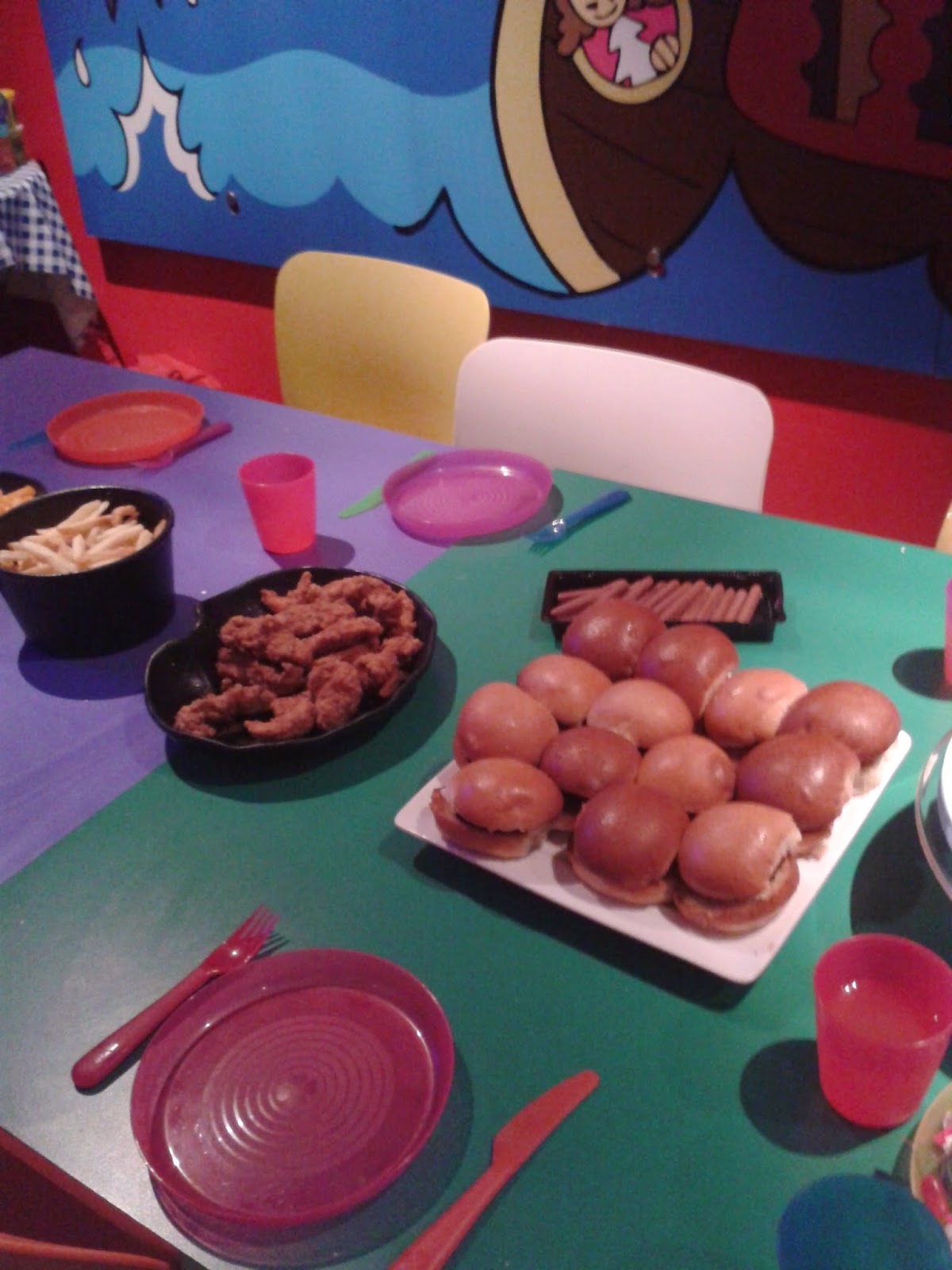 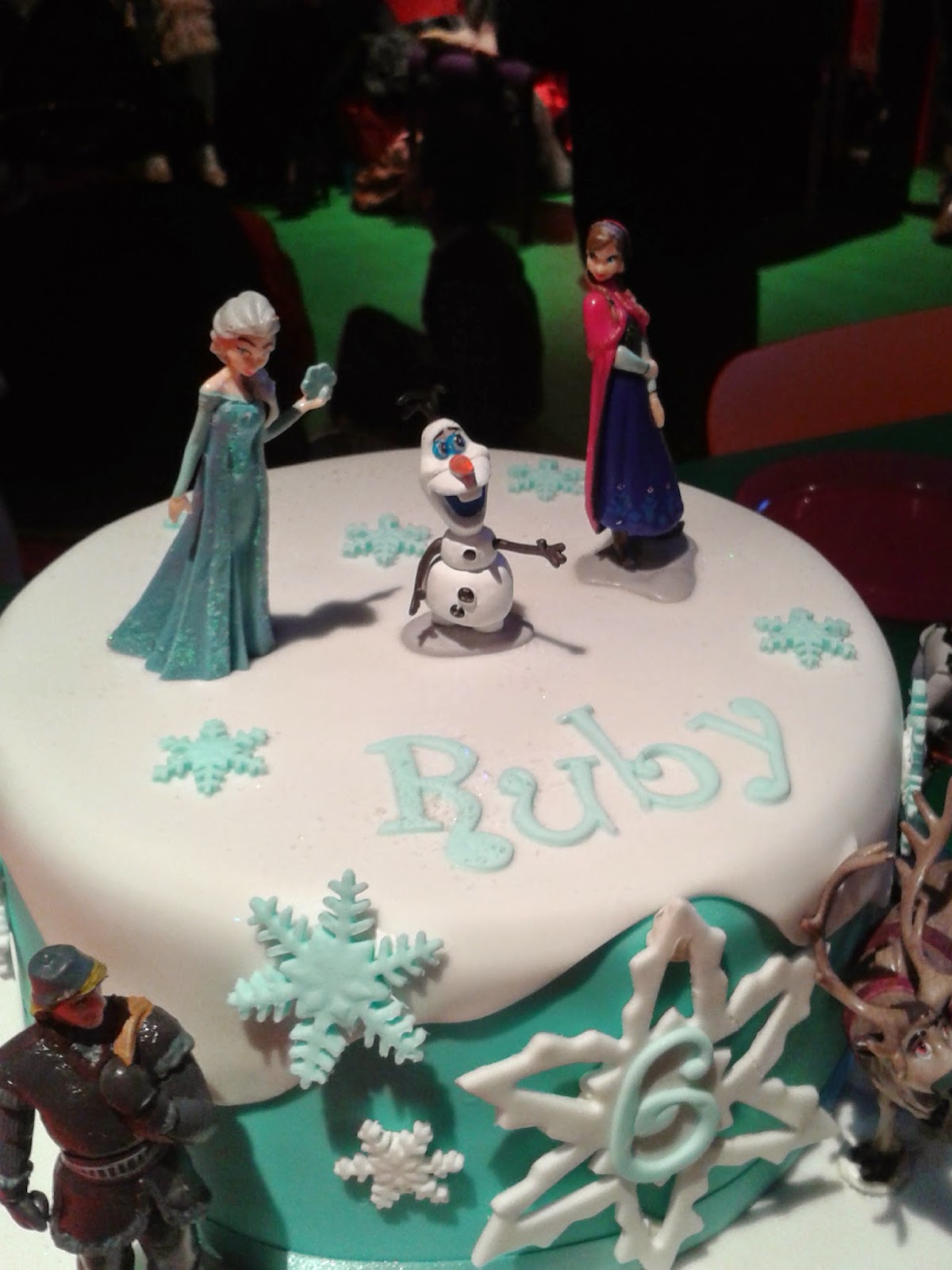 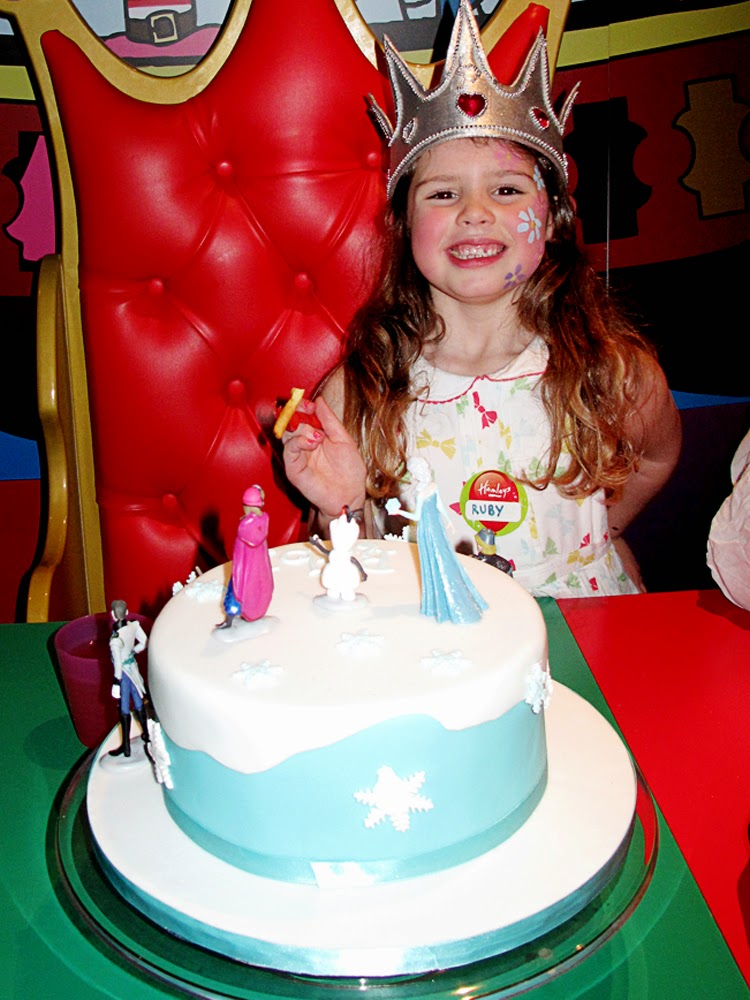 After a rousing chorus of “Happy Birthday” to Ruby, the children were delighted to meet surprise guest Hamley Bear who, despite his size, managed to throw some quite convincing shapes whilst dancing with the birthday girl to “For the first time in forever”.

He was then practically overpowered as the party guests claimed their own hugs and dances. 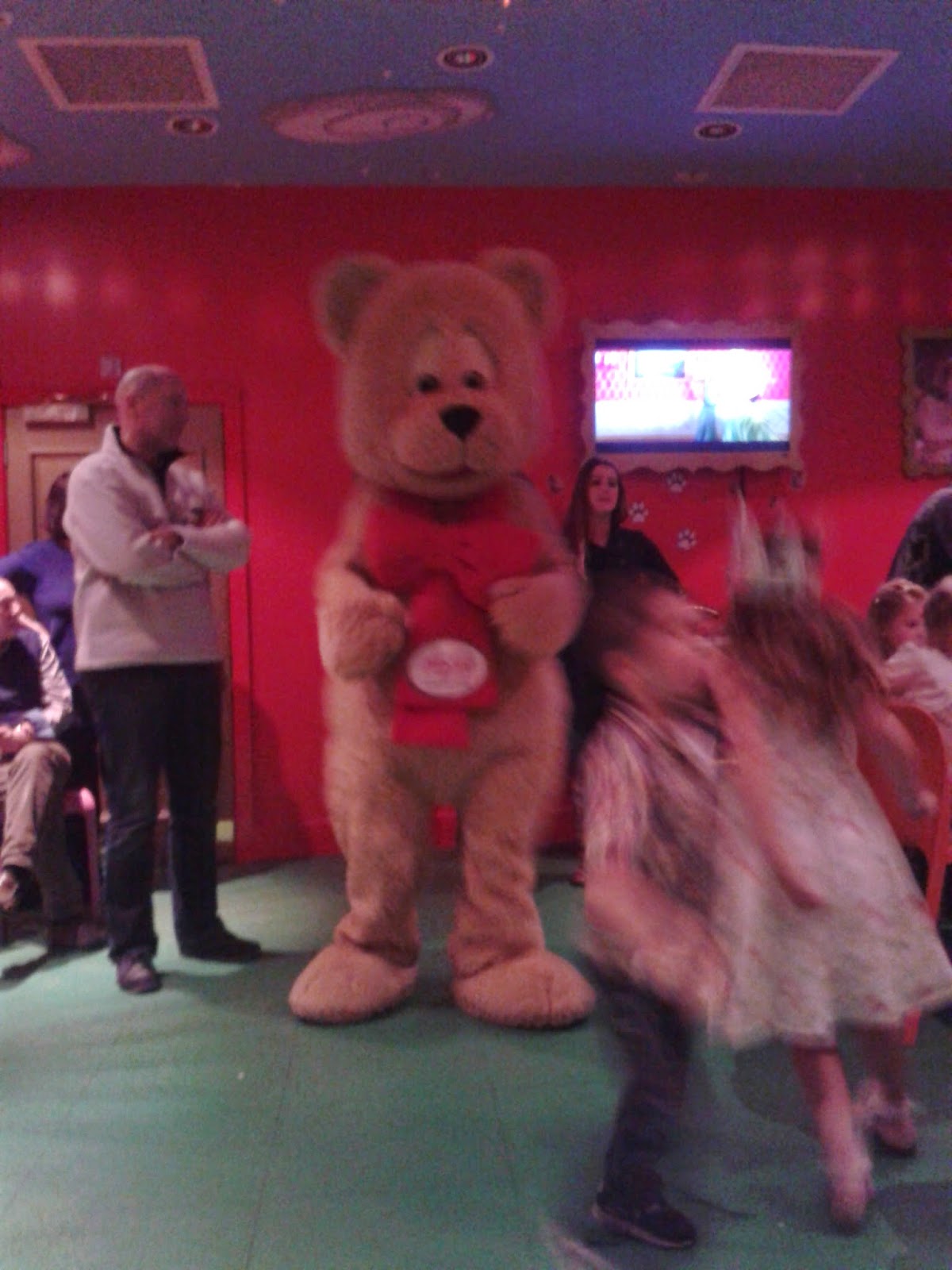 Photographed by yours truly in “shakey-vision”

Then it was goody bags, balloons and generous slices of cake all round as the party guests left Captain James and his team to recover. 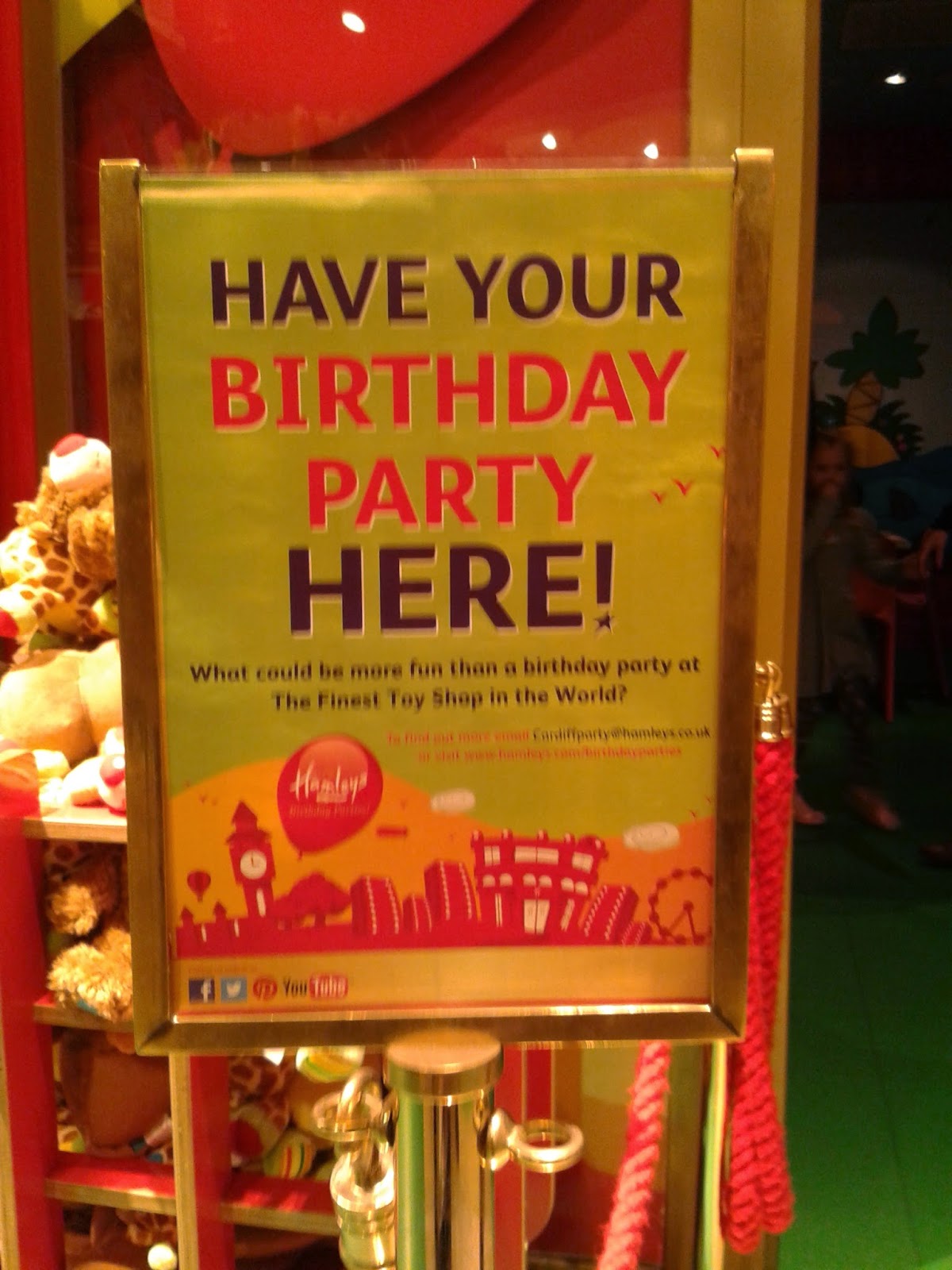 We had a great time at the Hamleys Pirates & Princesses Party and, as I mentioned in my previous blog post here, although the price per head is arguably a little higher than, say, the local soft play centres, this is more than made up for by the fact that everything is done for the party organiser, bar send out the invitations – making it extremely stress free.

Hamleys’ themed parties are available every day and include, for example, Superhero!, Safari, Tea Party and even a pampering party, Luvley.  Packages, with the exception of Tea Party, are priced at £35 per child for 2 hours partying and the party room can accommodate up to 16 children with a minimum of 10 children per booking and a maximum of 4 supervising adults per booking.

Extras for all parties can be provided such as a magician, photographer, videographer or face painter.

The value of the gift bag is around the £20 mark and the items contained in it are good quality. Ieuan’s gift bag selection contained a miniature nerf gun and Caitlin had a lovely cuddly toy horse. 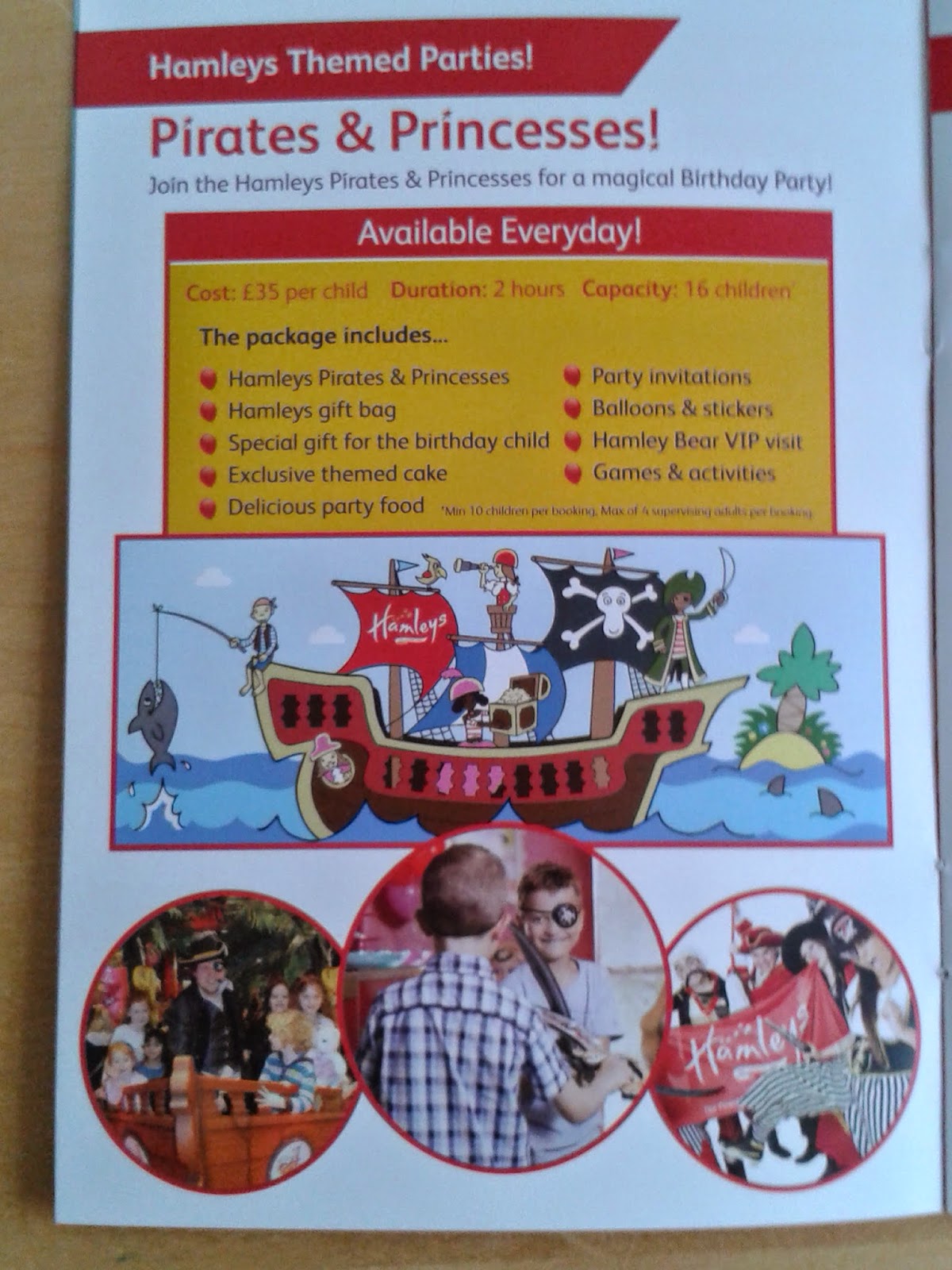 *We were invited as guests of  St Davids’ Cardiff and Hamleys Toy Store.