To celebrate the launch of their new kids’ pack, we had a fun time yesterday with the lovely team from Wales’ favourite mineral water, Brecon Carreg, learning how to be eco-friendly and crafty with our used water bottles.

Brecon Carreg is doing their bit by making slimmer, lighter bottles which use 24% less plastic and are reducing our carbon footprint by 450 tonnes per year. 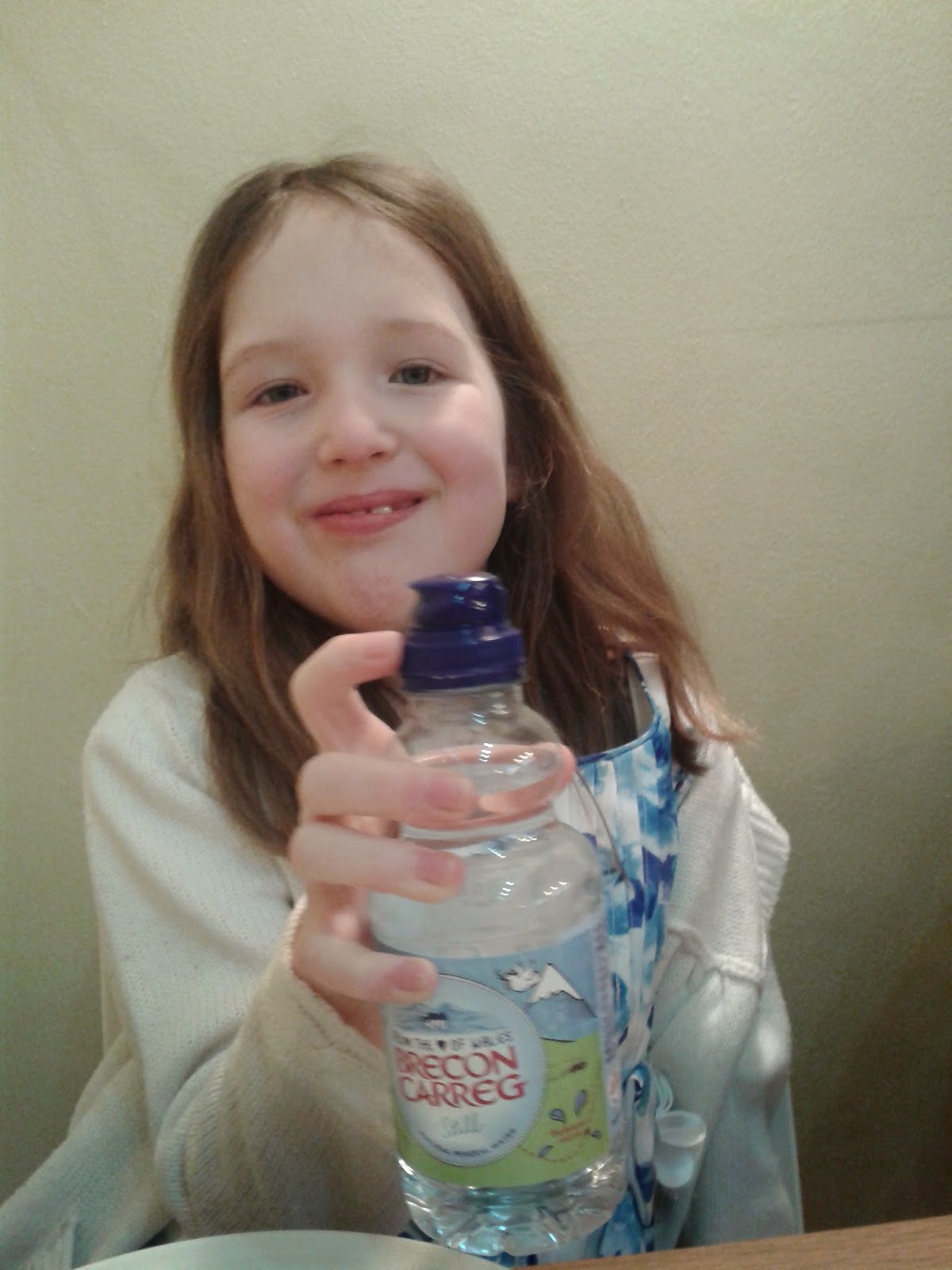 Since restocking the kids’ craft supplies is currently costing me enough to refinance a small nation, the chance to be creative with something that is generally just thrown out into our council’s delightful recycling bags was welcome. 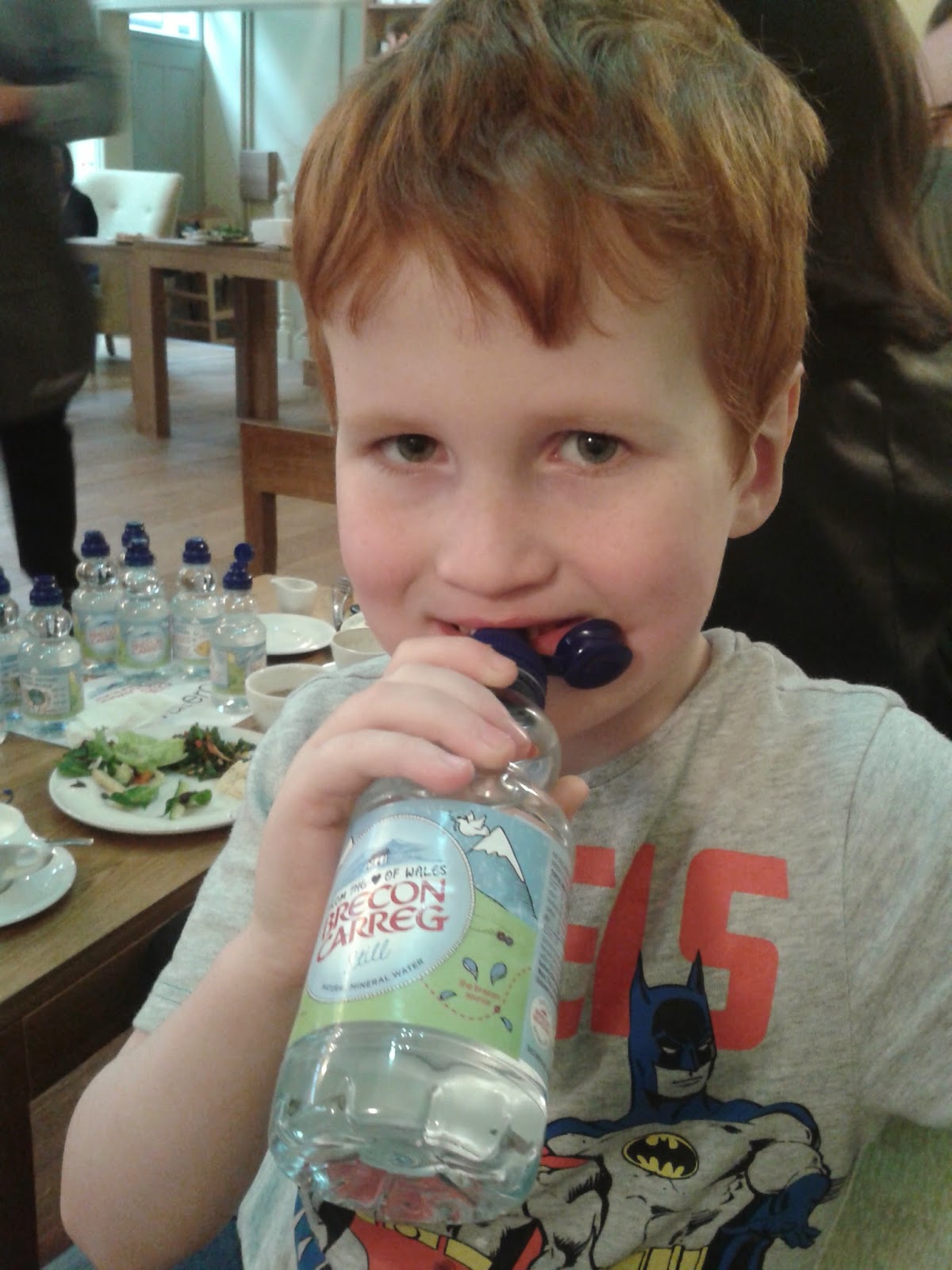 Ensconced in the warmth and culinary happiness that is Waterloo Tea, we were fed and, erm, watered and then it was over to Caitlin and Ieuan and the lovely Amy from @ScienceBurp to unleash our inner Mr Maker.

My own inner Mr Maker has sadly transmogrified into Anne Teak from Gigglebiz but still, I gave it a whirl.

The suggested brief, which was of course swiftly overridden by the male contingent of the party, was to make an animal.

True to form, Caitlin chose to make a puppy.

Ieuan, egged on by The Husband (whose birthday it was, and who was clearly remembering a childhood now in particularly dusty and far off hills), decided to make a robot.

Here’s what they both used:-

2. create a hinge between the two bottles using sticky tape so that one end will sit on top of the other

3. stick on your googly eyes (we used double sided sticky tape for this)

4. cut a tongue shape from red card and, using double sided sticky tape again, attach it to the inside of the lower lid by creating a fold so that the tongue sticks out.

5. paint the inside of the bottles and leave to dry. 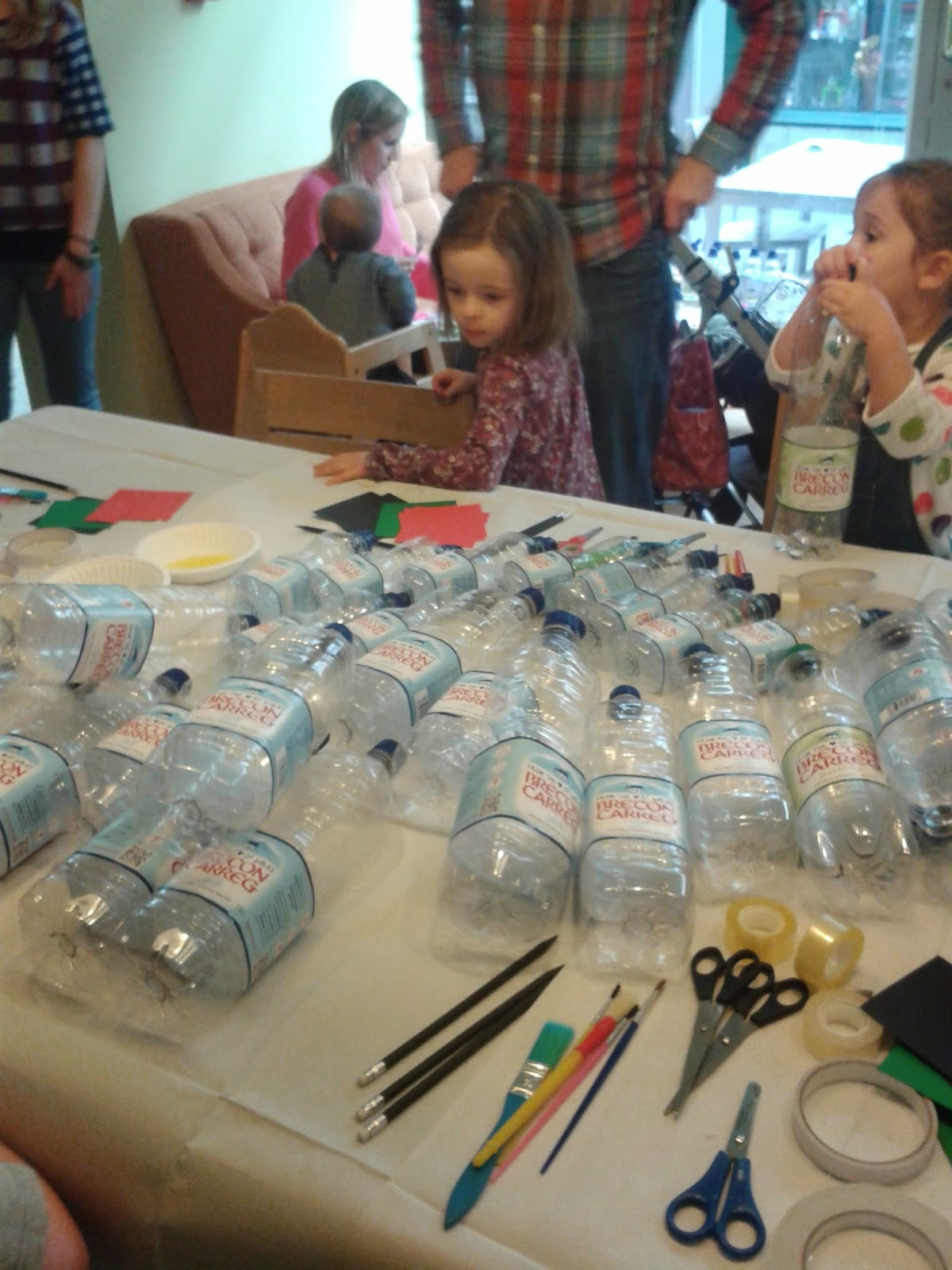 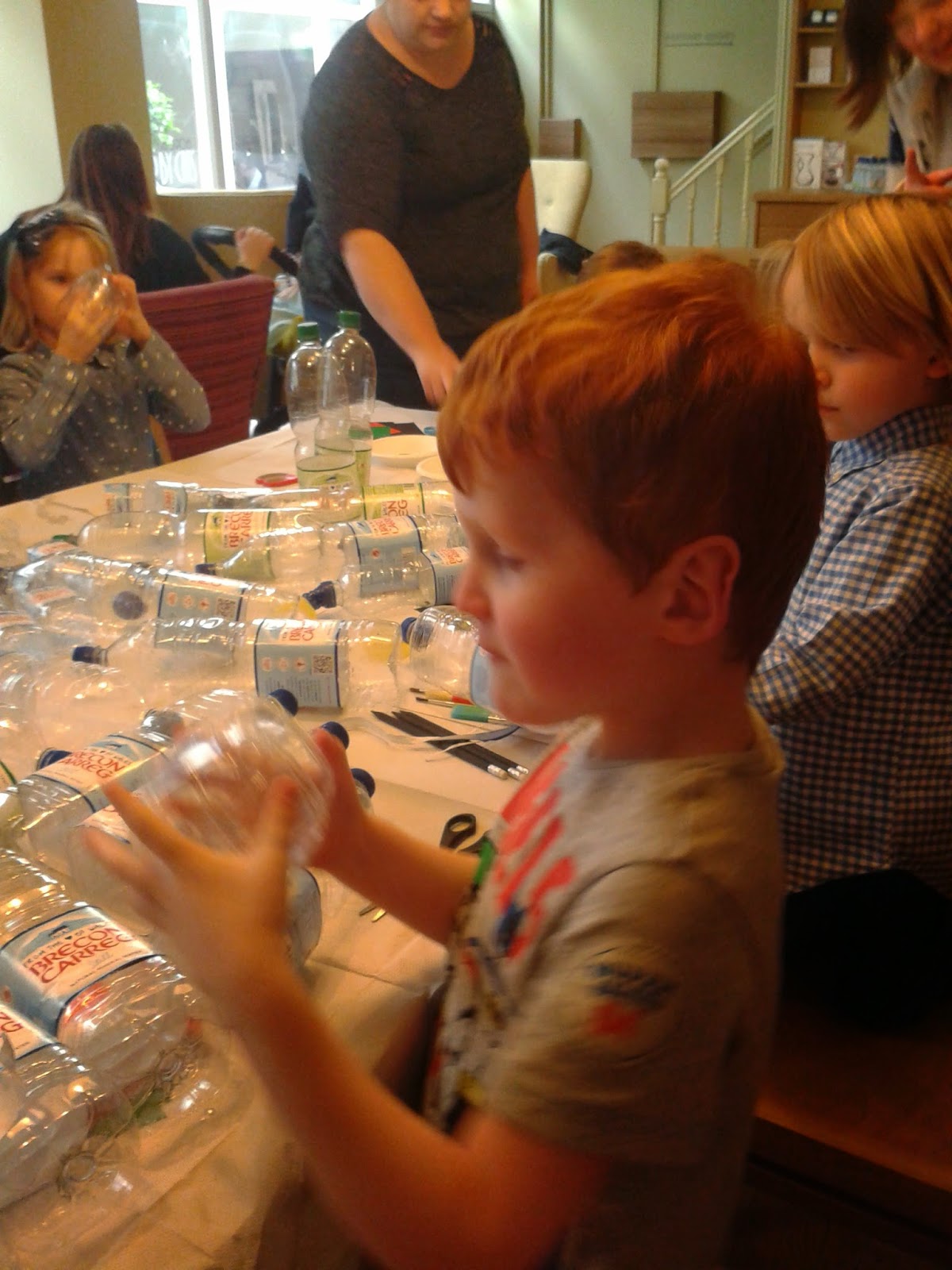 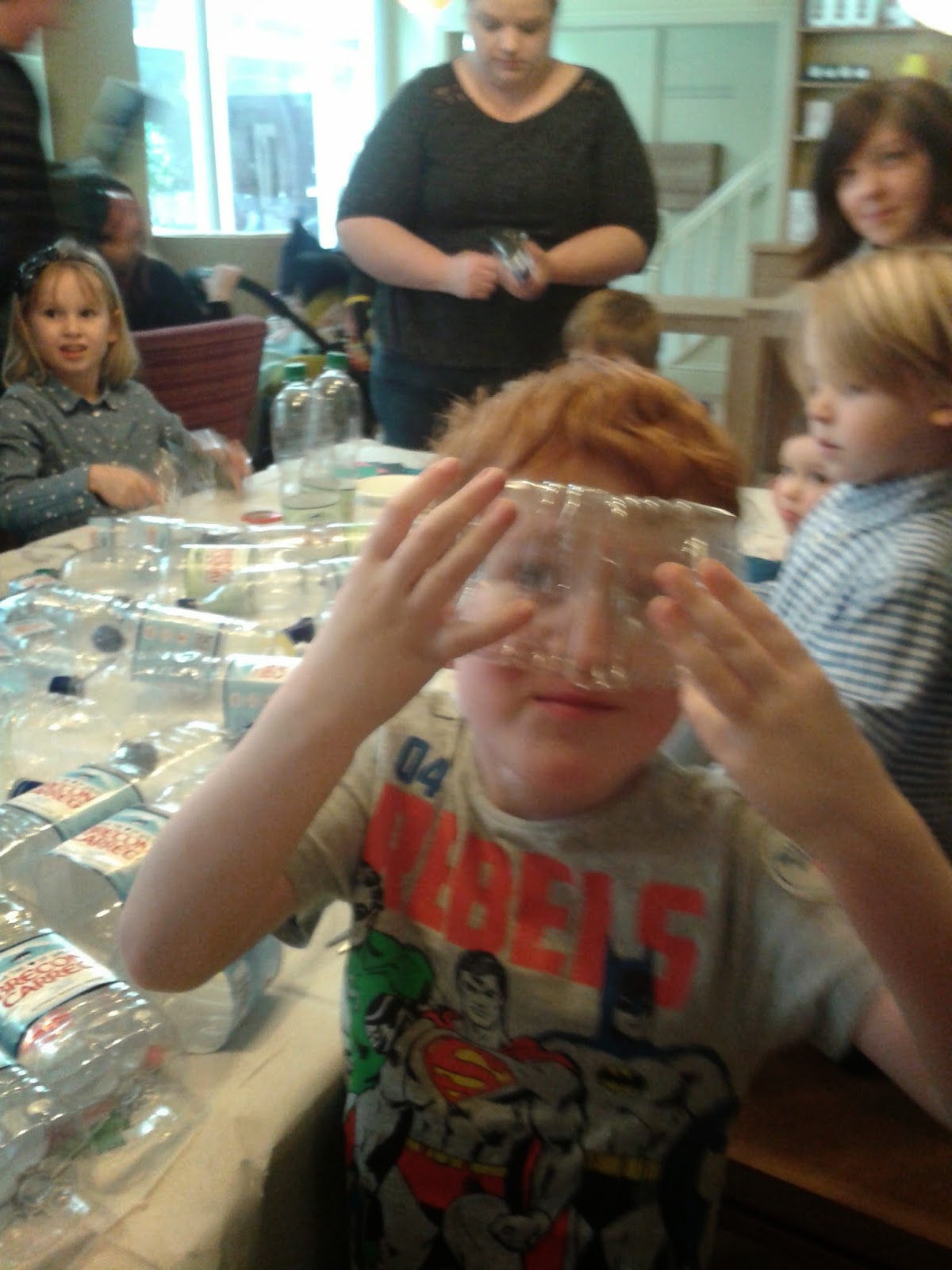 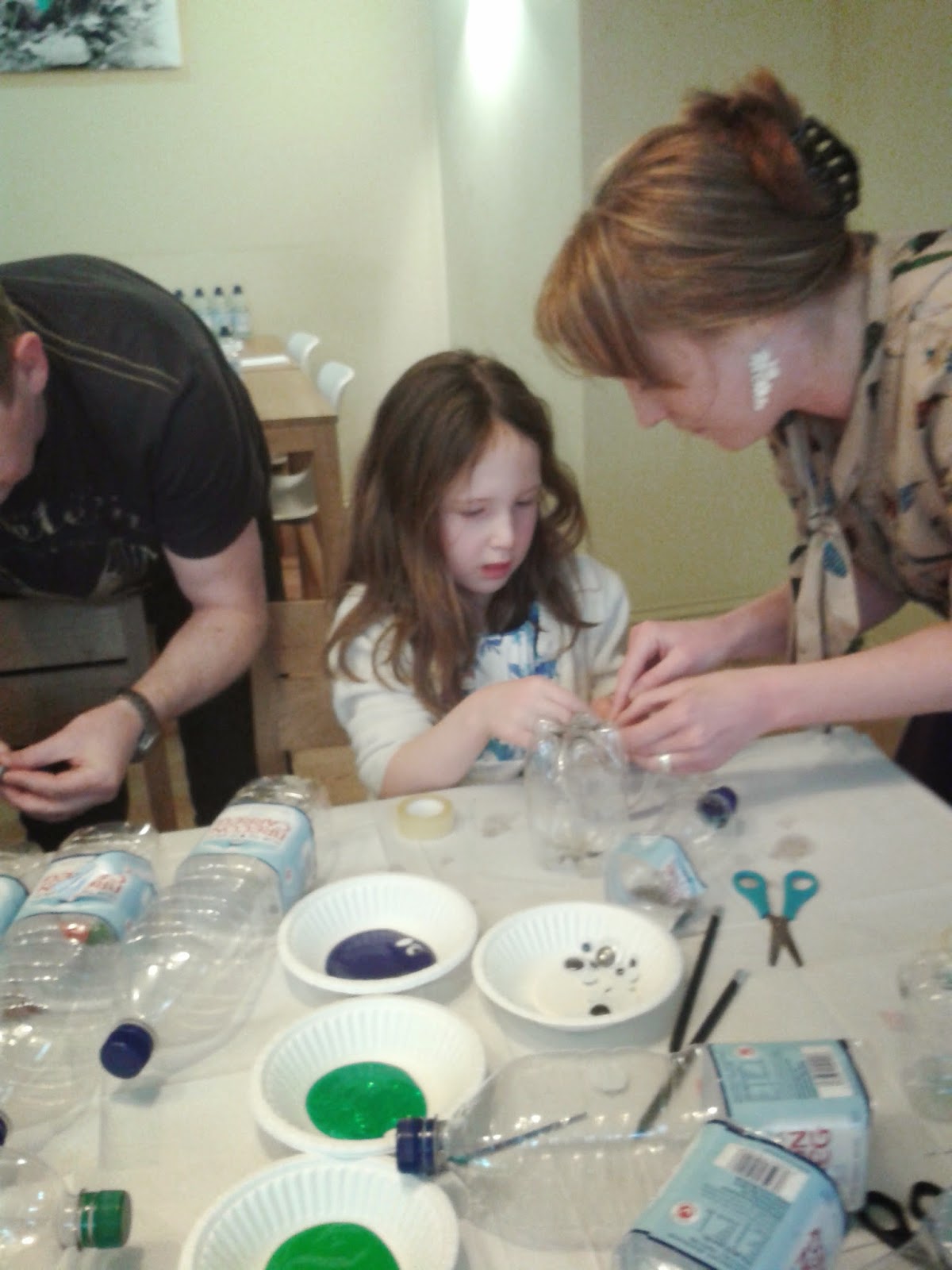 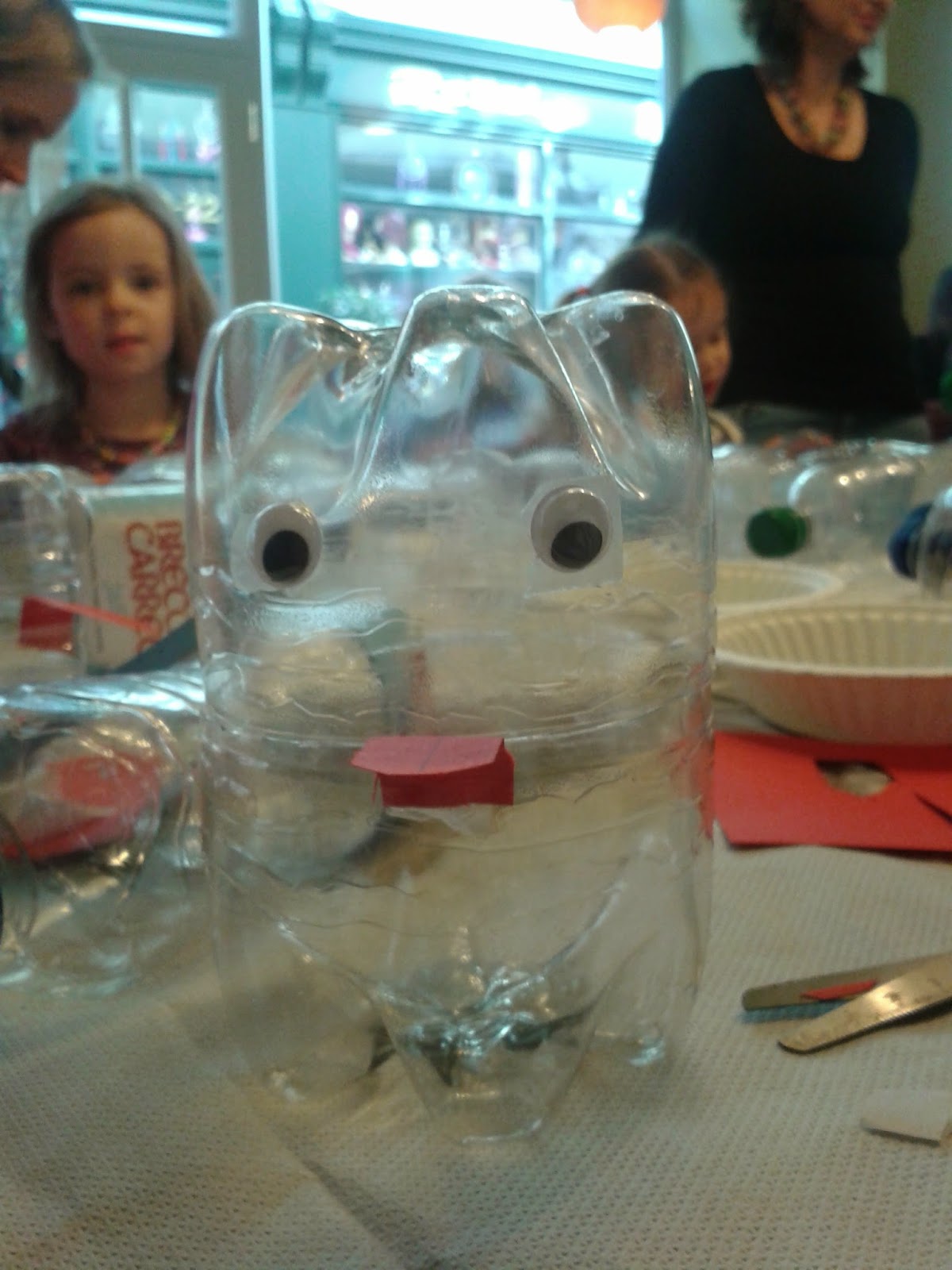 Not entirely sure of the breed though… 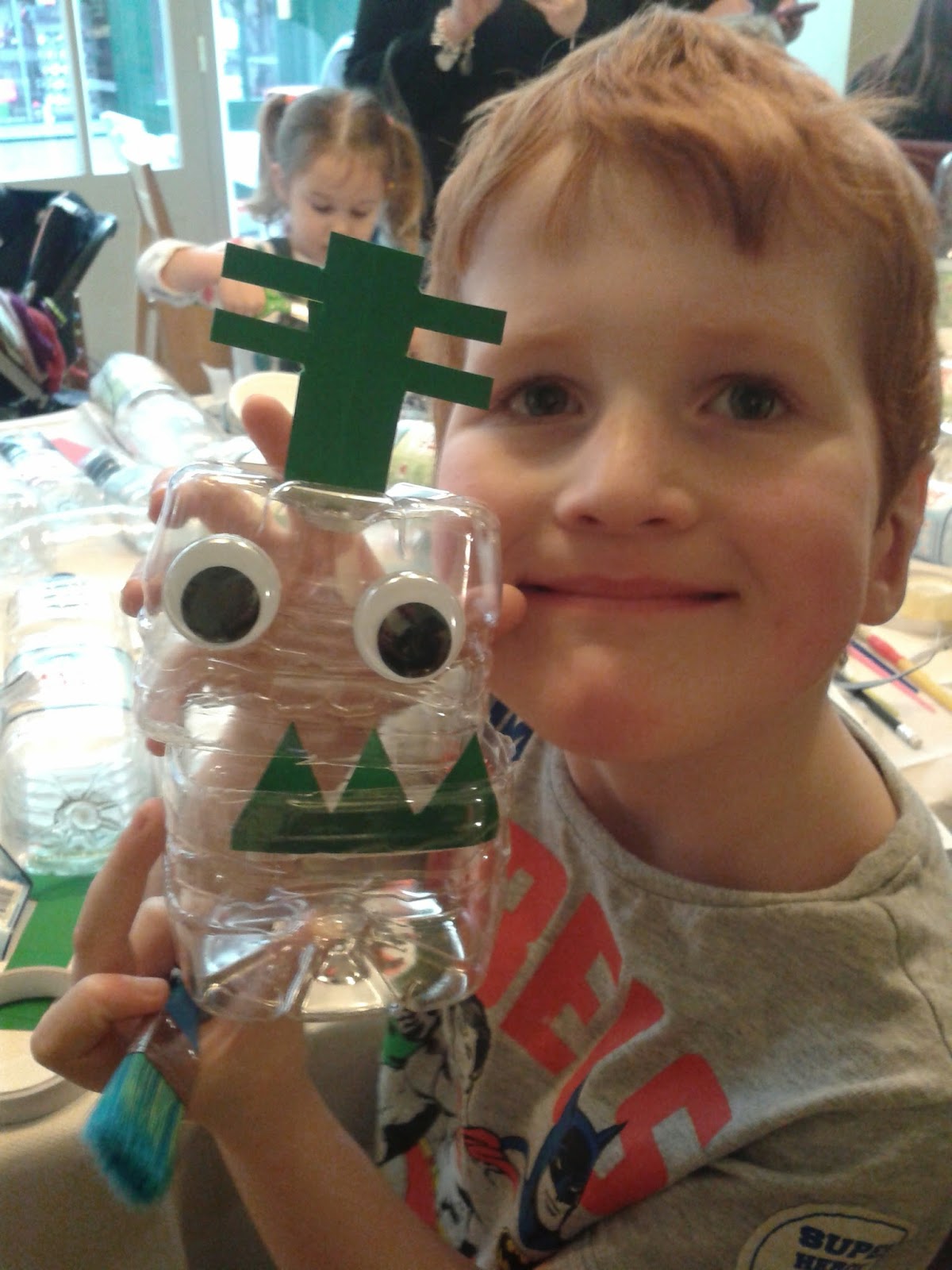 And, voila, introducing Lucy the Puppy and Stewart the Robot.

Ieuan had a lovely time racing Stewart around with his fellow crafters’ creations and The Husband was particularly proud of the antennae he’d fashioned out of green card.

Caitlin was just happy to be ‘doing crafts’. 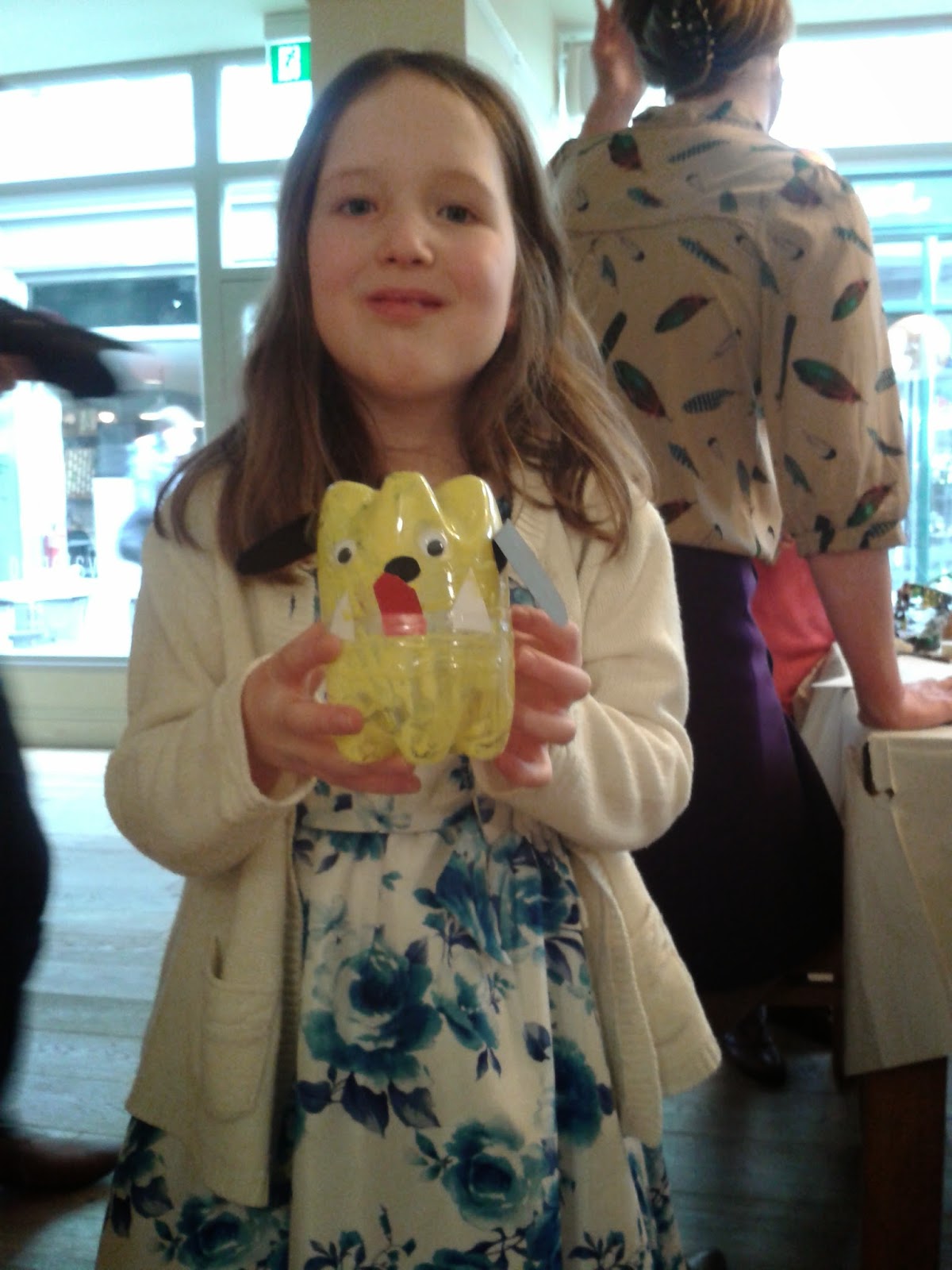 It was a great way to spend the afternoon.

Big thanks to Brecon Carreg, Waterloo Tea, Science Burp and Brighter Comms (who I suspect had more than a hand in the mayhem). 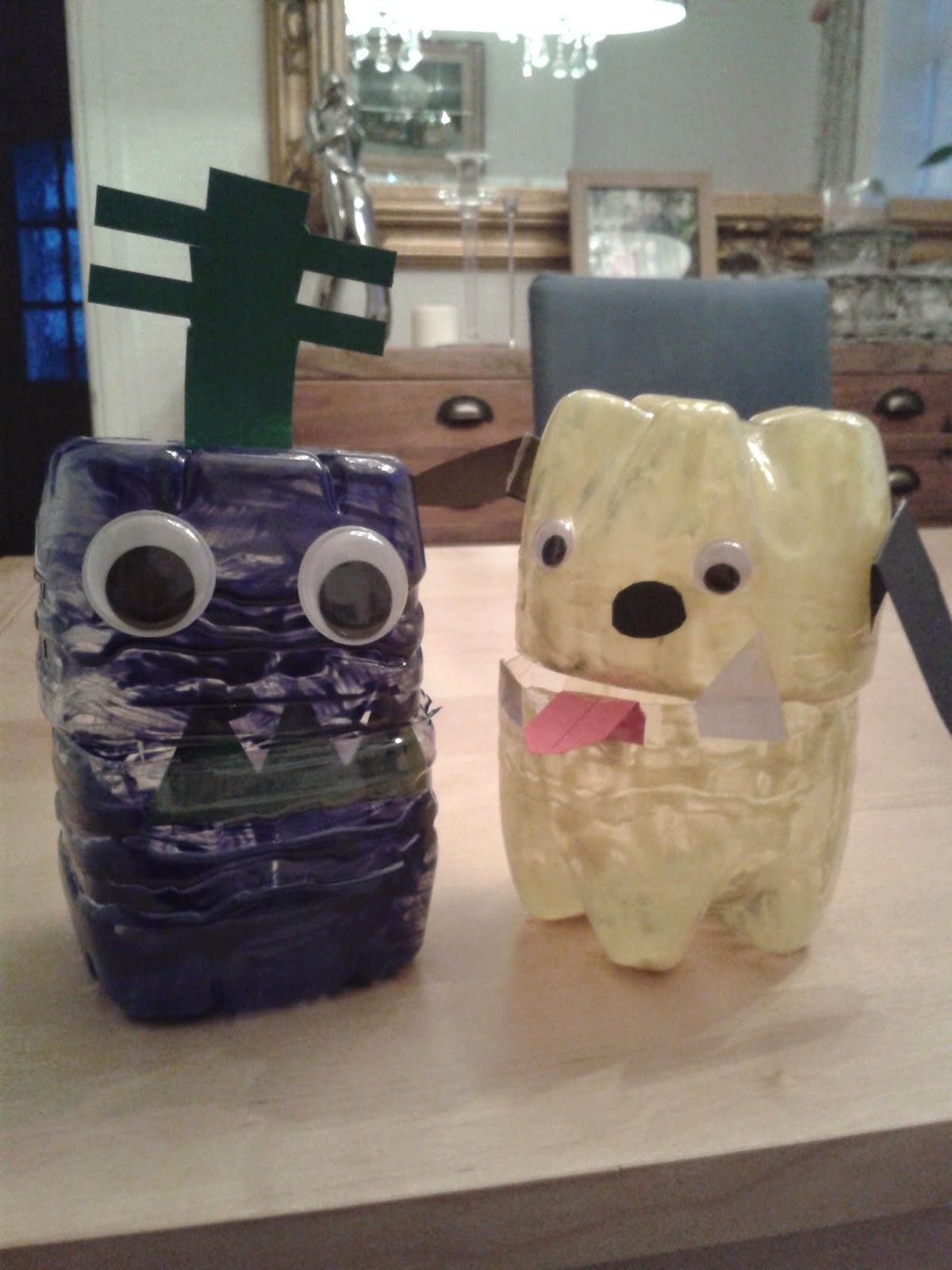