If you had said to me that I would spend a happy morning playing golf on Level 3 of the car park in the St. David’s 2 Shopping Centre in Cardiff, I would have probably thought you were somewhat under par but that’s exactly what happened earlier today at Treetop Adventure Golf Cardiff. 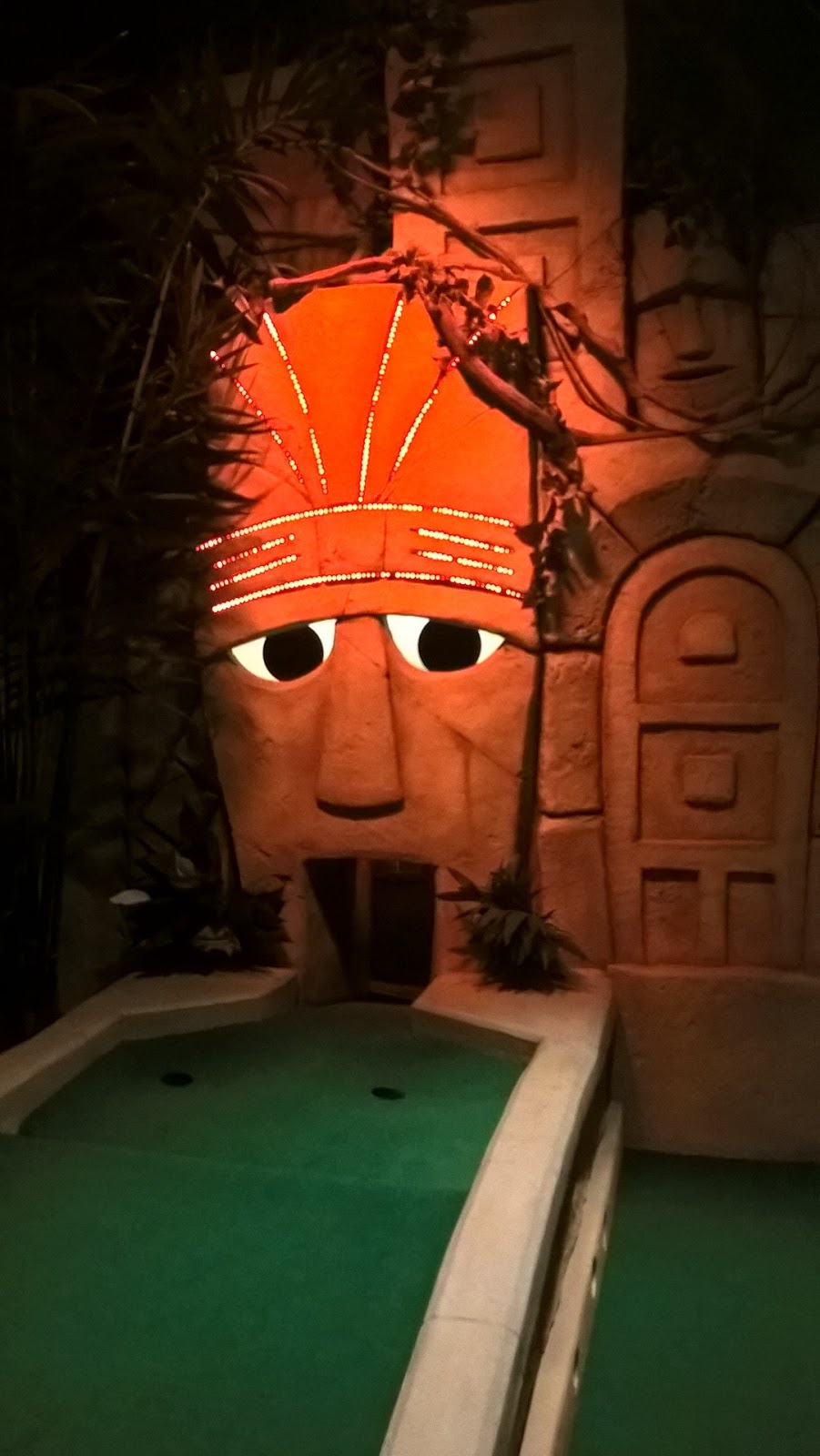 The Hobbis clan were given the opportunity to play mini golf in the tropical rainforest at Treetop Adventure Golf centre whilst storms rumbled overhead and we were accompanied by the sounds of chattering monkeys and tropical birds.

No, not the usual Cardiff weather but an impressive sound and light system adding a great atmosphere. 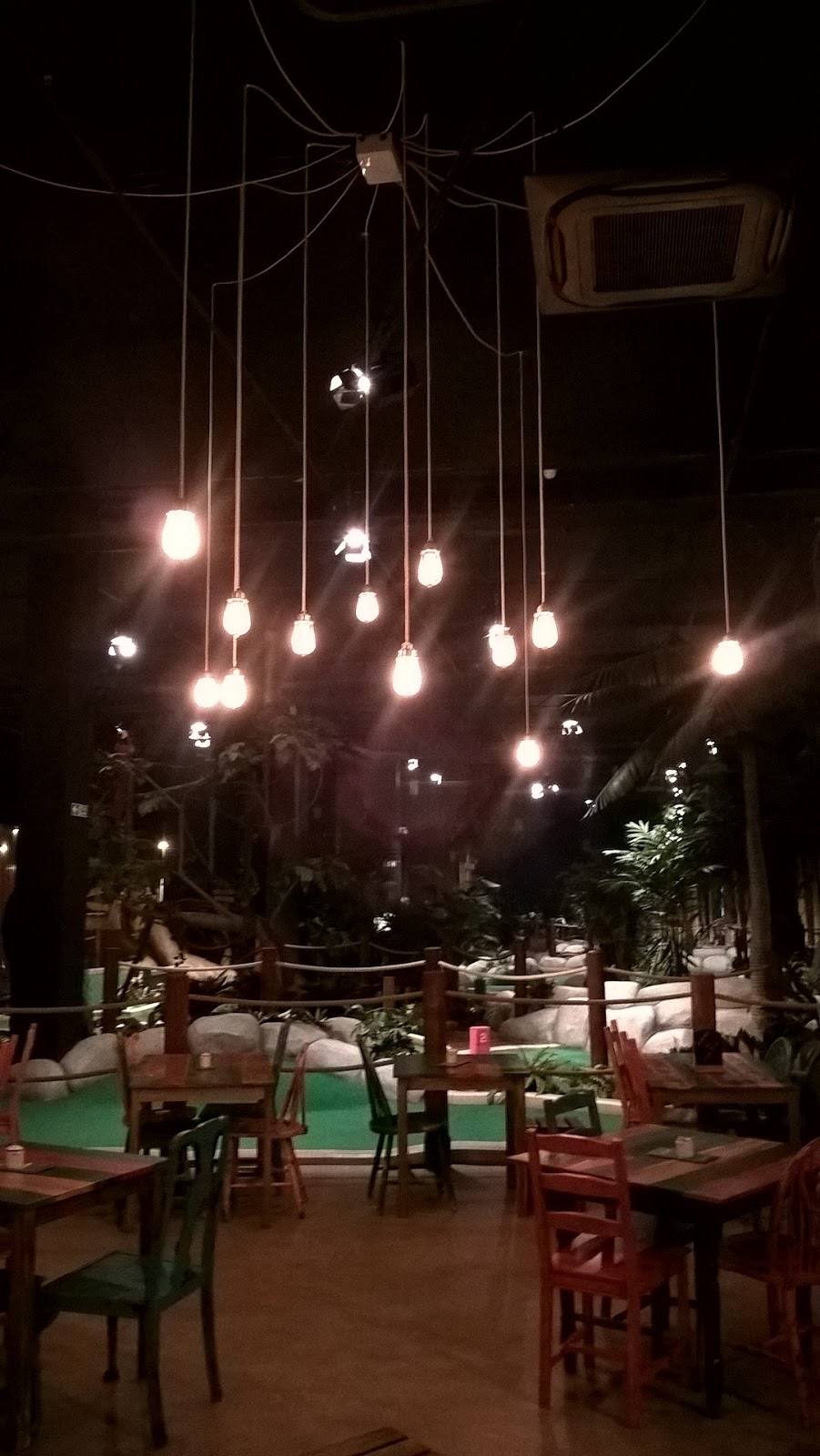 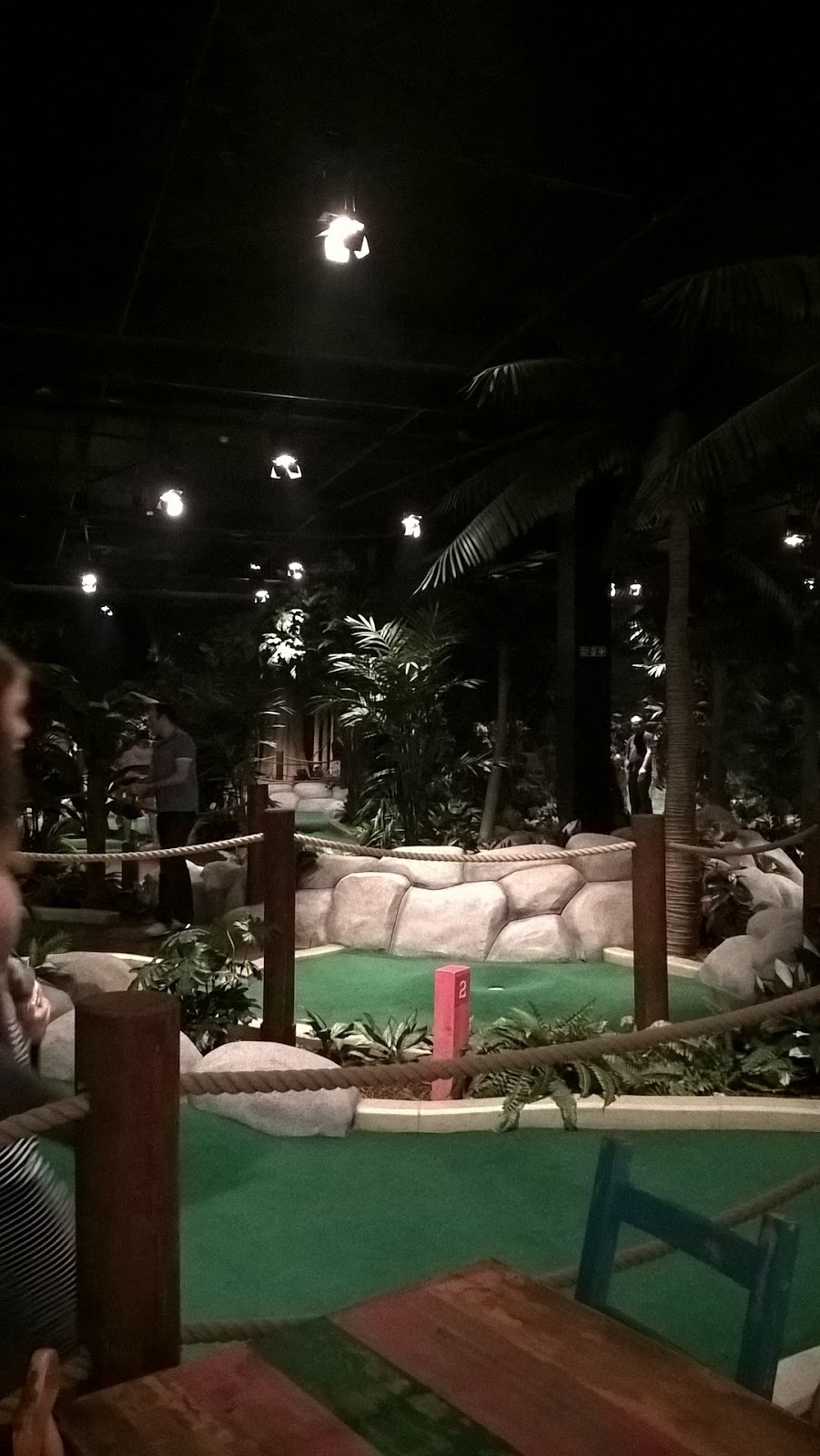 It is immense fun – and you know me, I’d often struggle to find fun if it was signposted “fun this way” and included a comprehensive guided tour by Mr Fun himself.

I haven’t played mini golf (or crazy golf as we were allowed to call it in the ’70s) since playing the windswept and rainy course on Plymouth Hoe when flares were all the rage and the Osmonds were rocking white jumpsuits and singing about equally crazy horses. 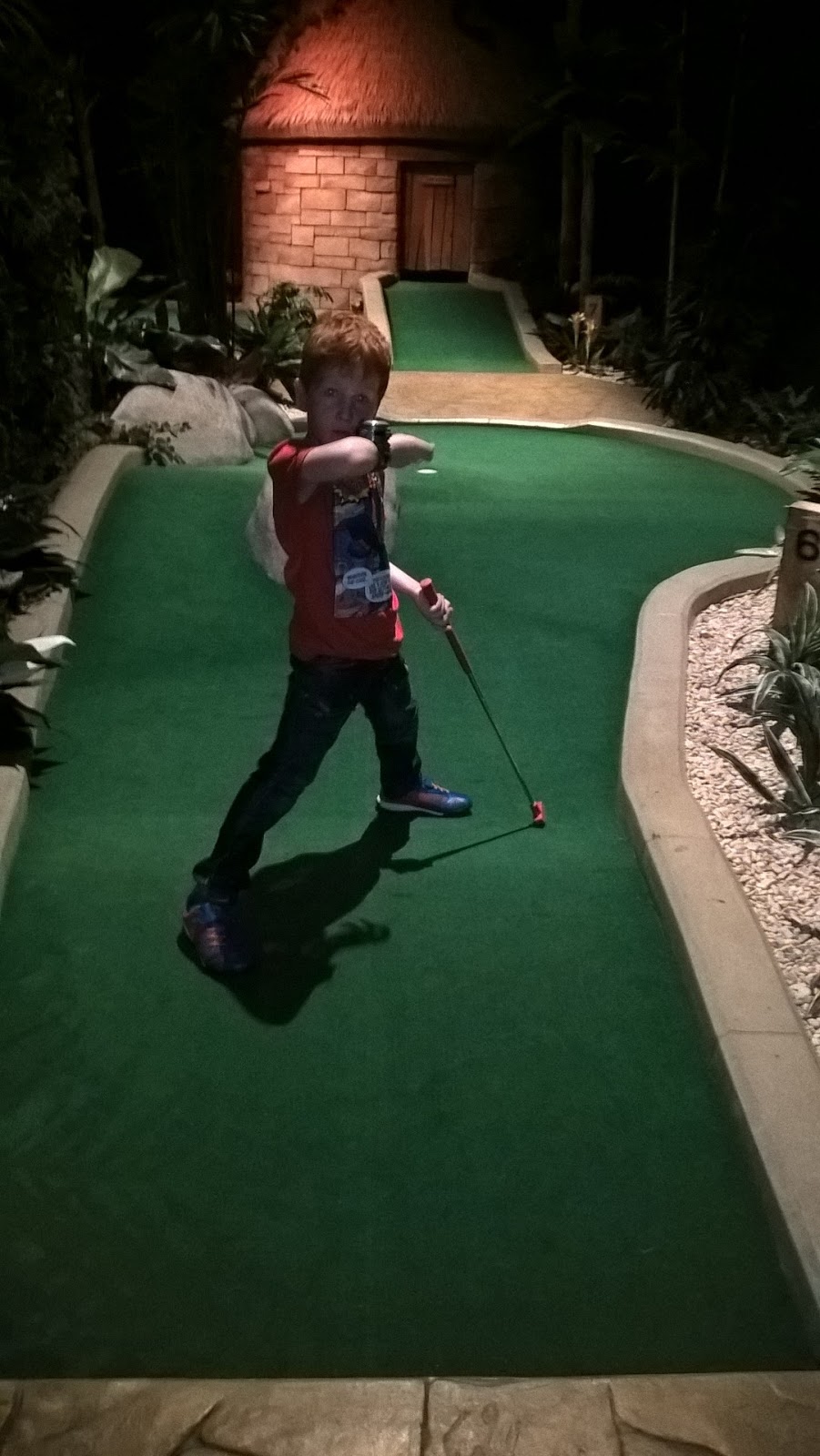 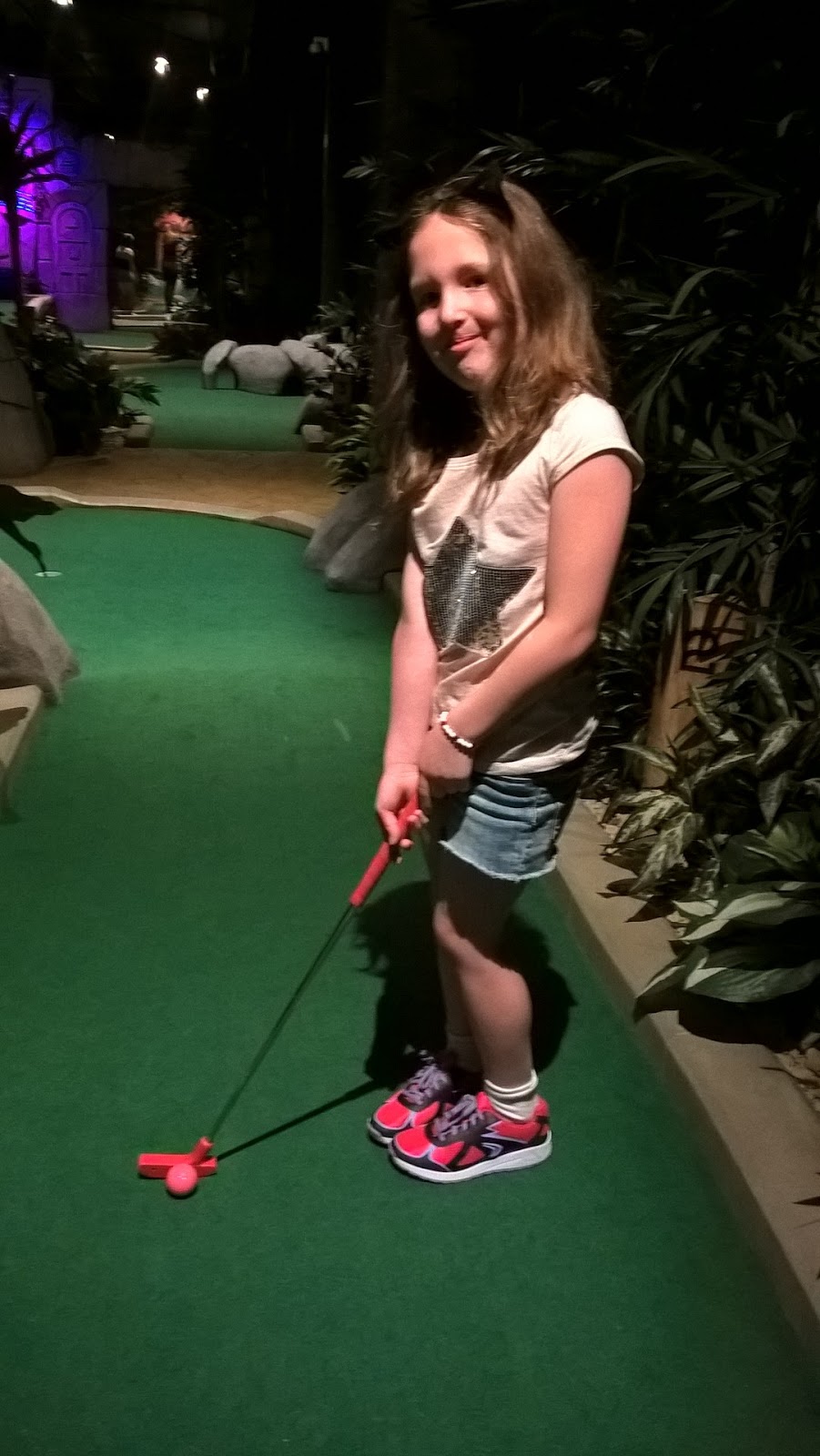 There are two 18 hole trails – the “Tropical Trail” and the “Ancient Explorer Trail” which both include interactive figures that either congratulate or berate the players.

There’s “The Sacred Mask” and “Chief Slumber” as well as Bob Monkey-House’s challenge at the 19th Hole. 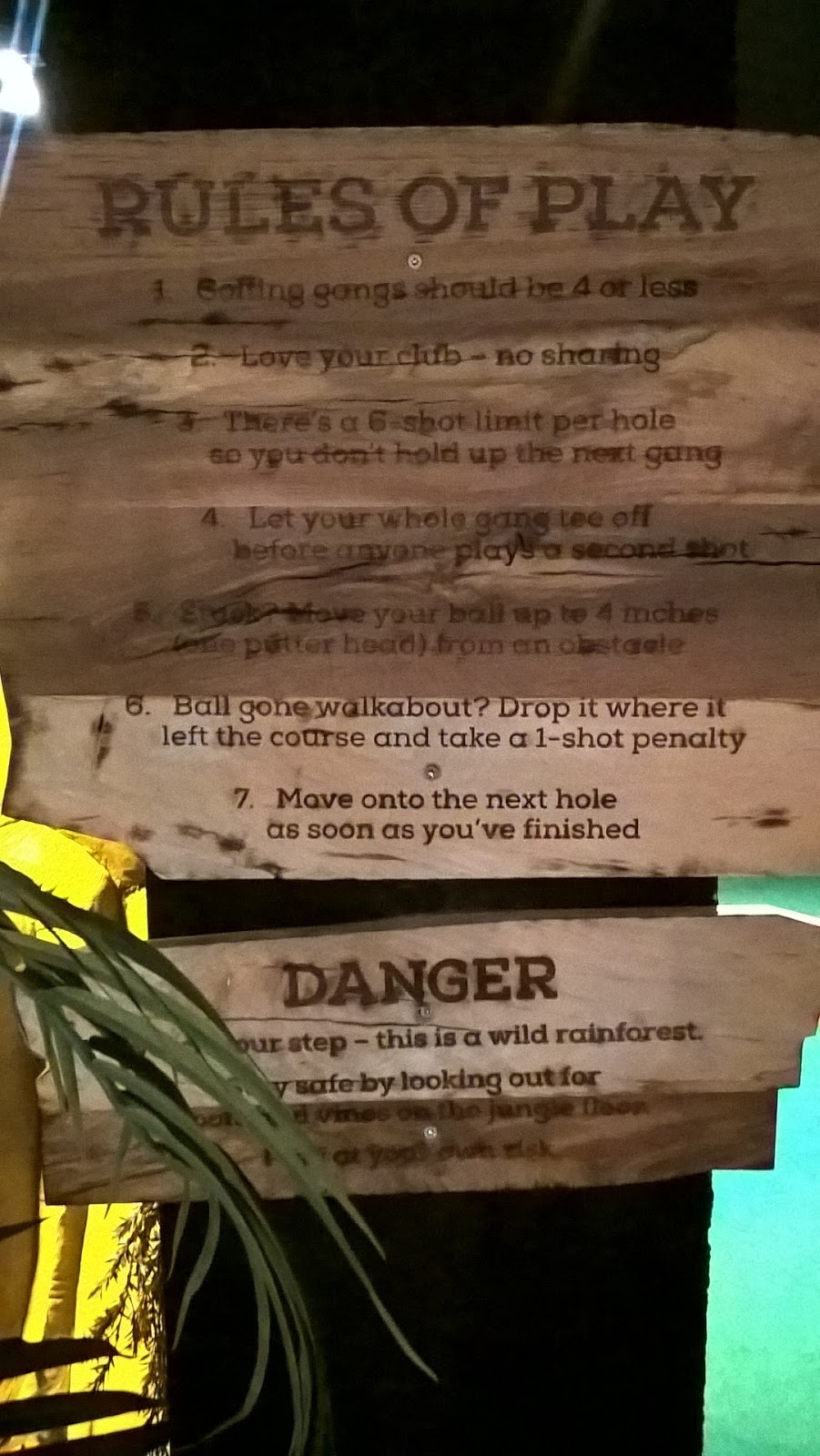 Needless to say, the Husband’s competitive streak appeared and he managed quite a few “holes in one”.

My own attempts varied from “roughly near the hole” to “which ruddy hole are you actually playing?” but I did manage to improve by the end of the course we played – which was, for obvious reasons the “Ancient Explorer”. 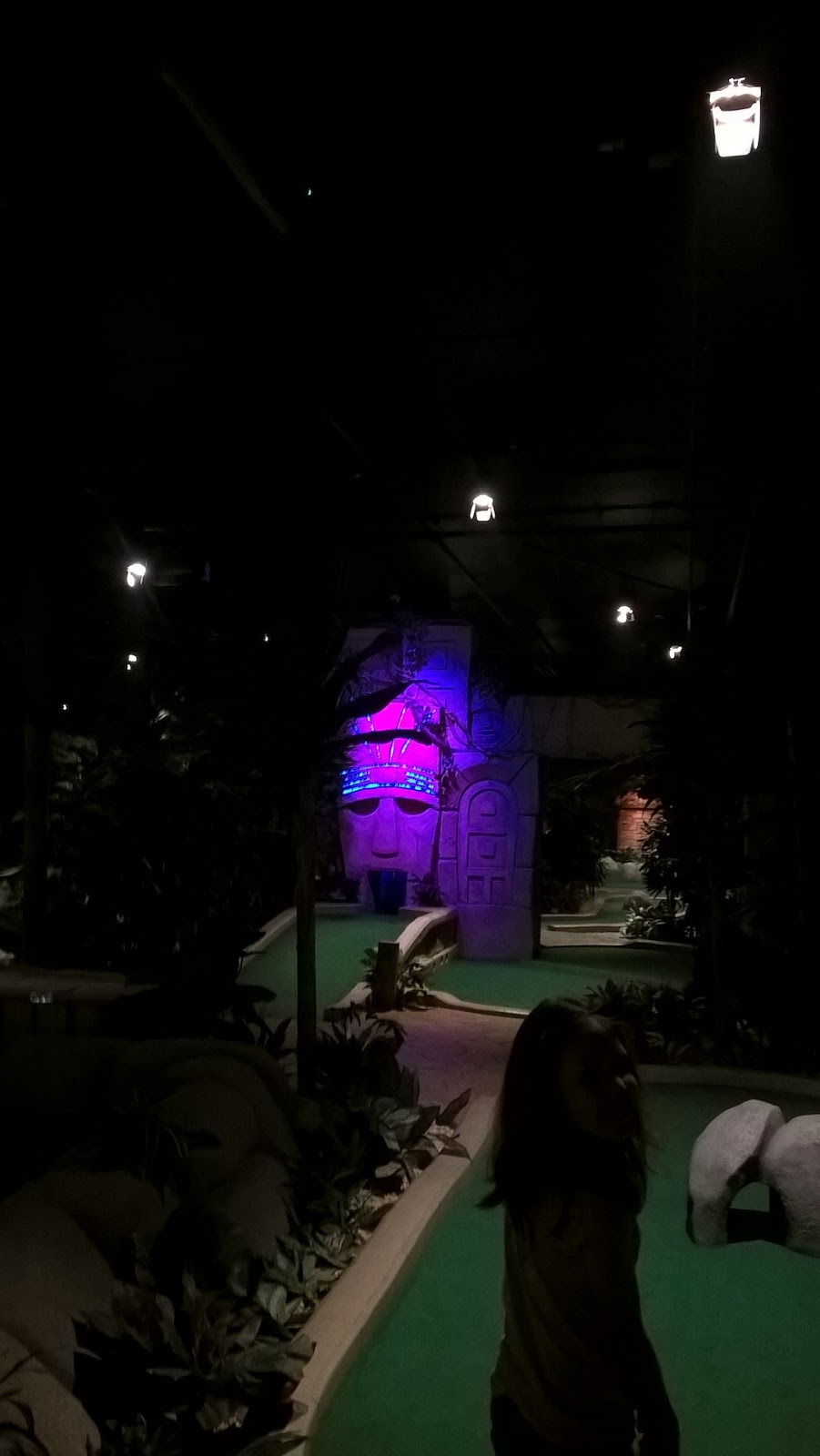 Caitlin and Ieuan were highly bemused at the transformation of their parents into two golfing ninjas (cough) and Ieuan was very disappointed to find his technique of just picking up his ball and placing it nearer the hole was frowned upon.

Caitlin had her own unique stroke which seemed to be closer to shovelling the ball in the hole than hitting it. 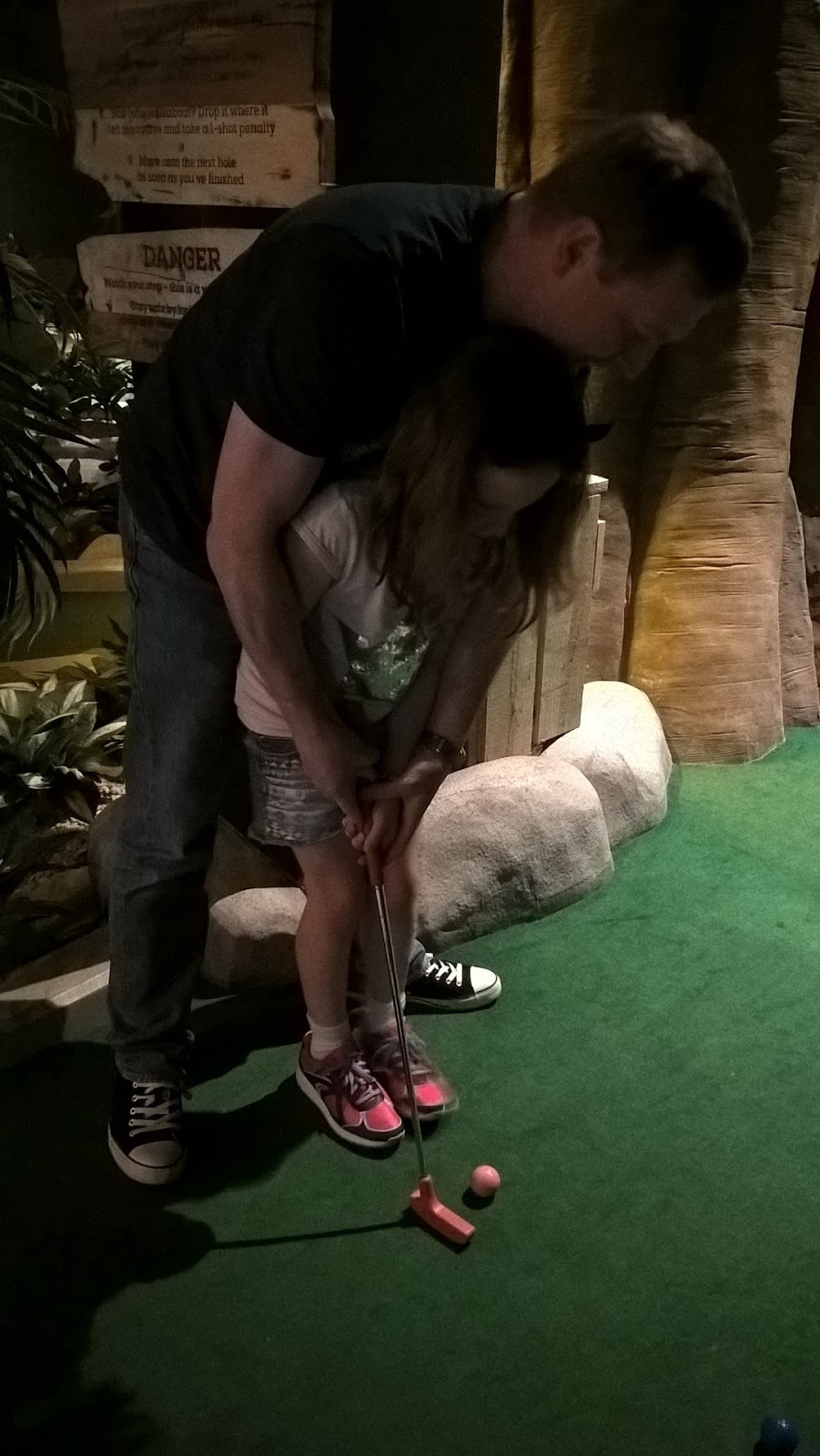 Still, we completed the course before Ieuan managed to collapse (according to him) from hunger.  He had spotted the very inviting clubhouse bar and cafe with its cosy chairs, tables and beanbags.

The Husband won (sigh) but I did manage to come second with the kids almost tying.

We celebrated our sporting prowess with moist chocolate brownies, chocolate cupcakes and reviving coffee (the kids had their usual Fruit Shoot / Diet Coke – the latter not being allowed at home, I might add).

We arrived at 10:30 and the centre got busy quite quickly

This may be because if you tee off before midday you can play both courses for the price of one (except on bank holidays).

Also, there is a suggested maximum of 6 shots per person per hole to ensure that nobody is waiting too long to play.

You’re also supposed to add a 1-shot penalty if your ball leaves the course and I’m afraid I may have ‘accidentally’ forgotten to do that a couple of times.

Treetop Adventure Golf Cardiff is open every day from 11 am in the week to 10 am at the weekend and stays open till late, either 10 pm or 11 pm depending on which day you go.

As well as coffees and cake, you can buy wine, beer or cocktails – although I’m not sure these would have improved my golf.

You can also have a party or event at the centre.

The full tariff of fees is available on the website. 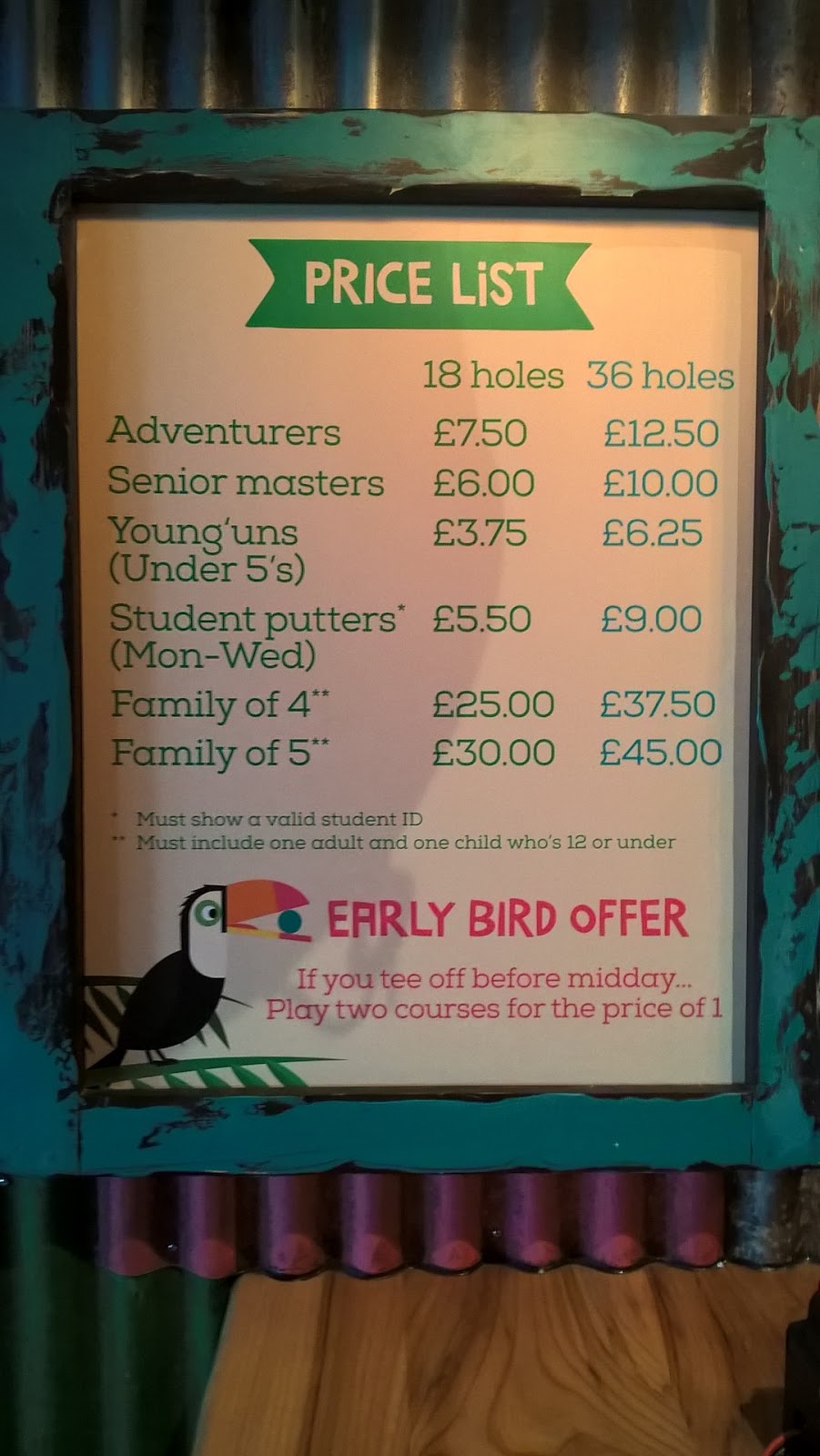 We had a great time at Treetop Adventure Golf Cardiff and it made a change to do something different and memorable.

The staff were friendly and helpful and, when our two started to protest at the time it was taking to drink our coffee (have you noticed kids always finish their snacks in about 30 seconds whilst your coffee is still boiling?), kindly proffered some colouring sheets and crayons.

There are lockers to leave your bags and the toilets (always an important benchmark in my book) had ornate hand basins and taps where the water flowed over, rather than out of them.

The door handles were made of rope.

The whole experience is extremely well designed and, if you have visited the Eden Project in Cornwall, you will know what kind of atmosphere to expect. 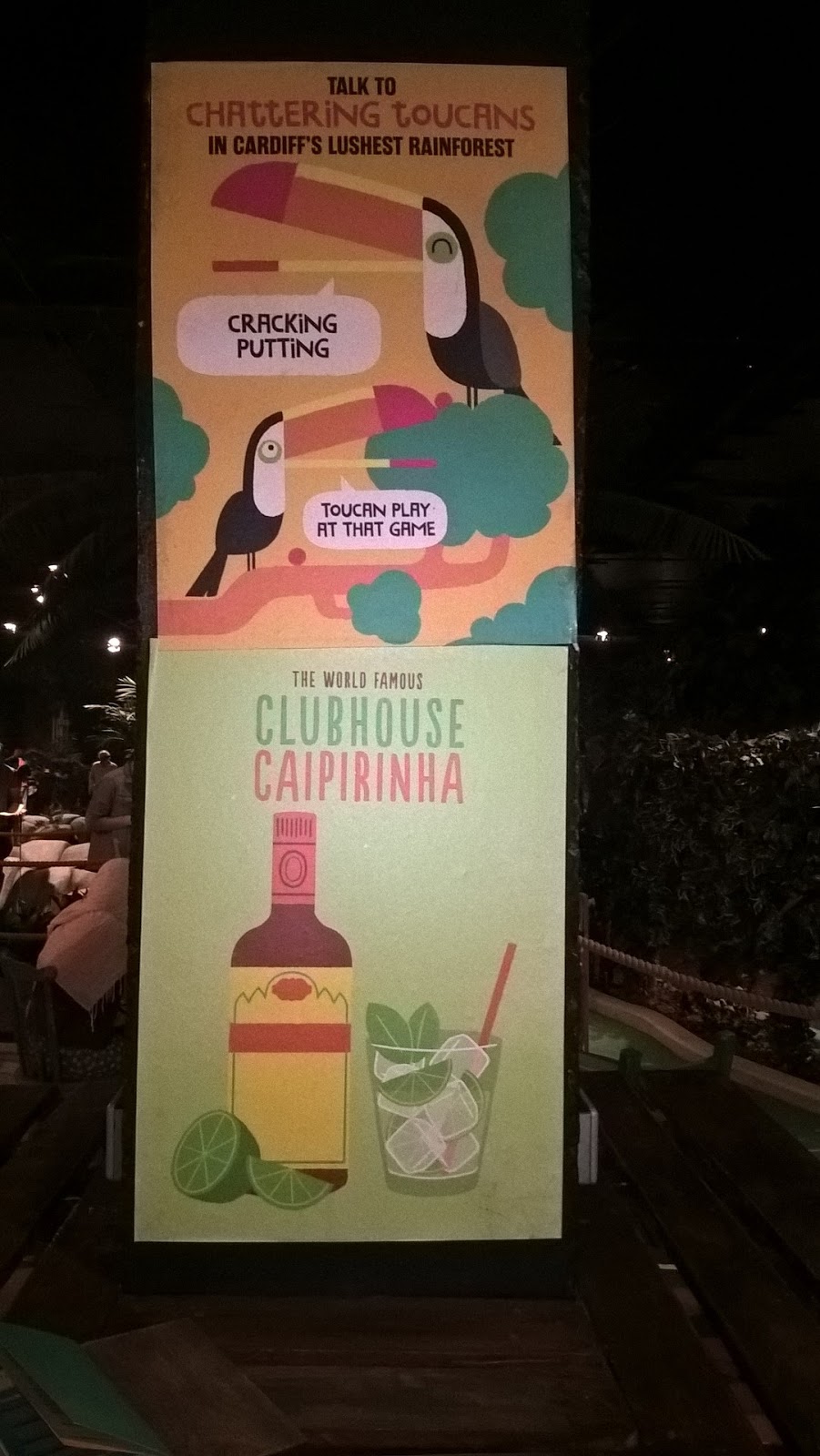 Ieuan was fascinated by the talking head at the 19th hole who, if you manage to shoot your ball into the centre of his puzzle, grants you a free round of golf next time.

None of us managed it but someone did whilst we were there – so it is possible. 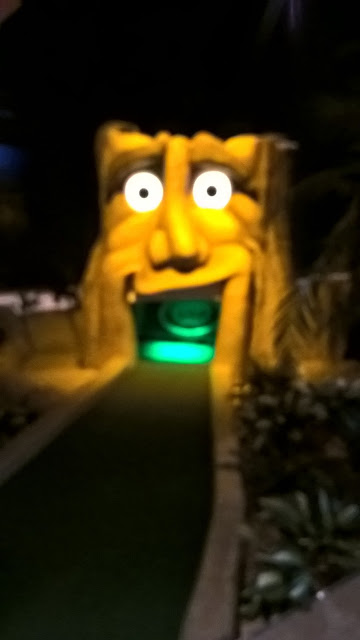 I’d heartily recommend a visit to Treetop Adventure Golf, particularly since summer has apparently failed to load correctly as usual and we’ve been treated to random bouts of torrential rain and hot sun.

It took us about an hour to complete one trail but if your kids are older you’ll probably find they want to move on to the second trail after a quick snack break.

We’ll certainly be going back.  I’ve got the hang of it now and since the Husband had 51 shots to my 58, a rematch is definitely due.

Further information is available at www.adventuregolf.com.

*We were invited to play a round of golf as guests of Treetop Adventure Golf.