On a drizzly Sunday afternoon, there’s nothing better than settling round together to play a game or two  – and given that we live in Wales, I have to say that’s quite a frequent occurrence.

So, when we were delighted to be sent two new games to play from Asmodee Games. 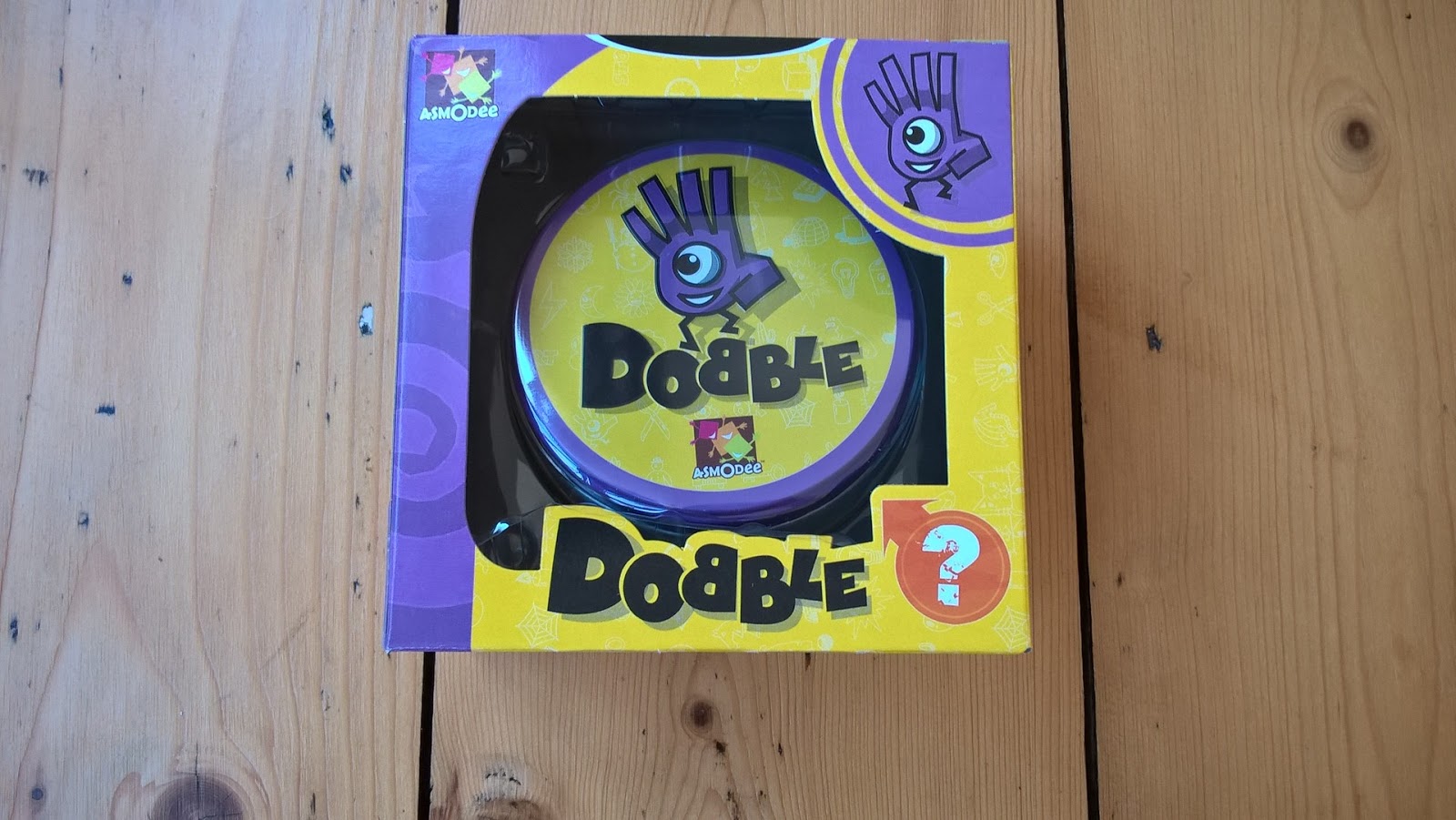 Dobble is a game of speed, observation and a great test of your reflexes for 2-8 players.  Aimed at anyone over the age of 6 years, the game is a race to find the one matching image between one card and another.

There are 55 playing cards, each displaying 8 pictures and there is always a matching picture on any two cards. The images may be different sizes and placed on any part of the card, making them difficult to spot.   Every card is unique and has only one picture in common with every other card in the deck.

There are 5 mini games: Fill the Well, The Towering Inferno, Hot Potato, Catch them all & The Poisoned Gift

The cards come in a sturdy tin and are fairly small making this an ideal game to take on holiday.

We tried the first of the mini-games – The Towering Inferno.

The cards are shuffled and one card is placed face down in front of each player. The remaining cards go in a pile in the middle of the table (the draw pile).

When ‘go’ is called out, the players flip their card face up. It’s a race to spot the identical symbol between the card of any other player and the card from the draw pile.

The first player to find an identical symbol names it, takes the card from the draw pile and places it in front of him or her, on top of his or her card.  This means a new card is revealed on the draw pile and the game continues until all the cards from this pile have been drawn.

The winner is the player who has gained the most cards.

We had a lot of fun with this one and it was just the right level of complexity for Ieuan (6) who doesn’t have, shall we say, unlimited wells of patience.

I was completely hopeless and appear to have the reflexes of a sloth.  Caitlin thrashed us all soundly, much to the Husband’s annoyance, spotting the symbols at lightning speed.

In my defence, I hadn’t yet had my 5th coffee of the morning.  When I’m feeling a bit stronger, I will be challenging our motley crew to one of the other mini-games to see if I can recover from the humiliation.  It’s suggested in the instructions that if you could even host a Dobble Tournament. This is likely to involve many hours of practice in my case.

Dobble is a great alternative to Snap and UNO and we highly recommend it.

Dobble, from Asmodee Games is available from Tesco, Argos, WHSmith or Waterstones. 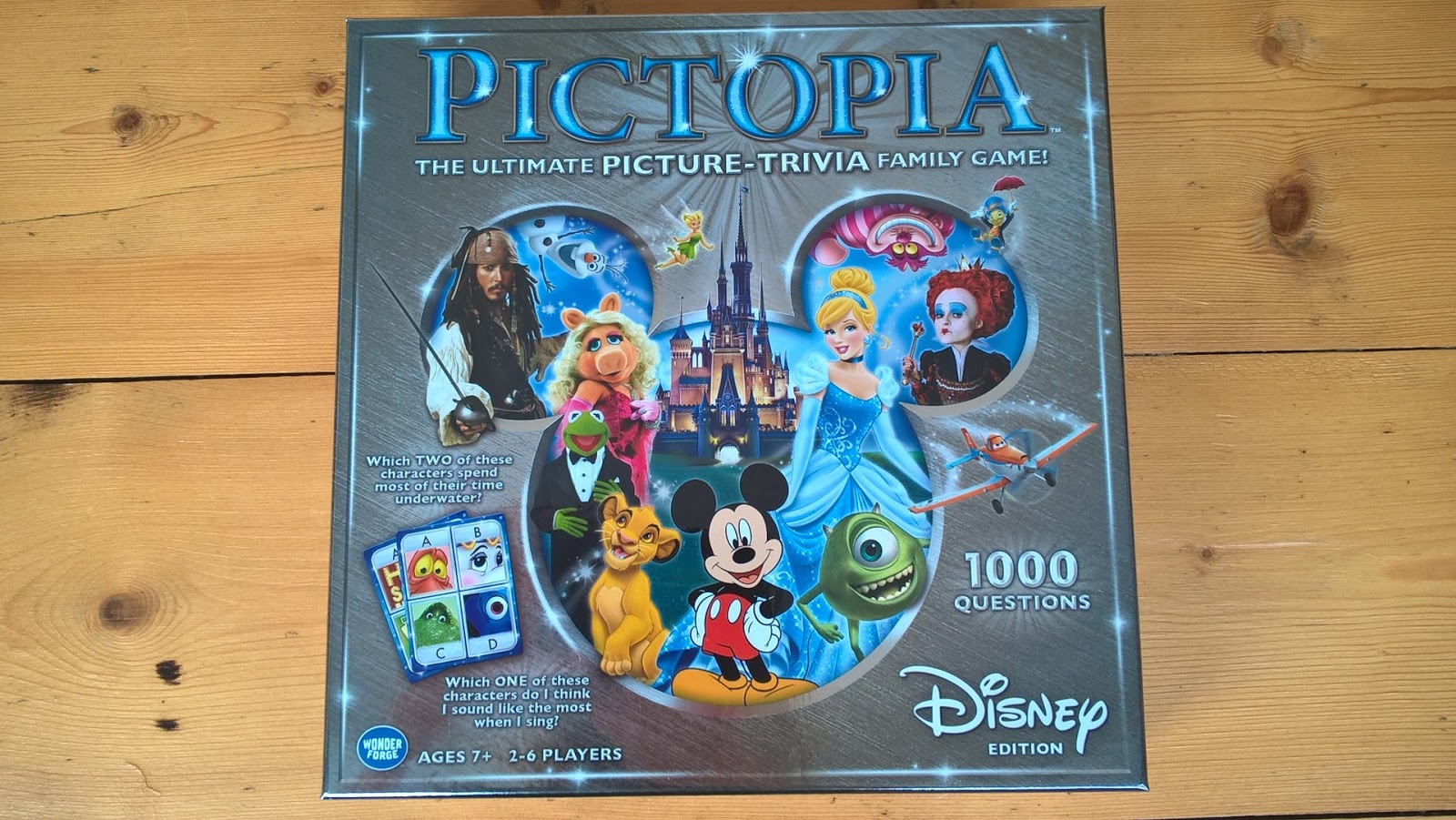 We were also sent Disney’s Pictopia The Ultimate Picture-Trivia Family Game to try.

Now we are all big Disney fans in this house but I have to confess my knowledge is probably stronger about the classics.  I was fully prepared to be roundly beaten once more by Caitlin (who is dressed as a Disney Princess 80% of the time – i.e. when not in school uniform).  Ieuan was going to be a wild card and we spent a good ten minutes debating whether Iron Man had anything to do with Disney. 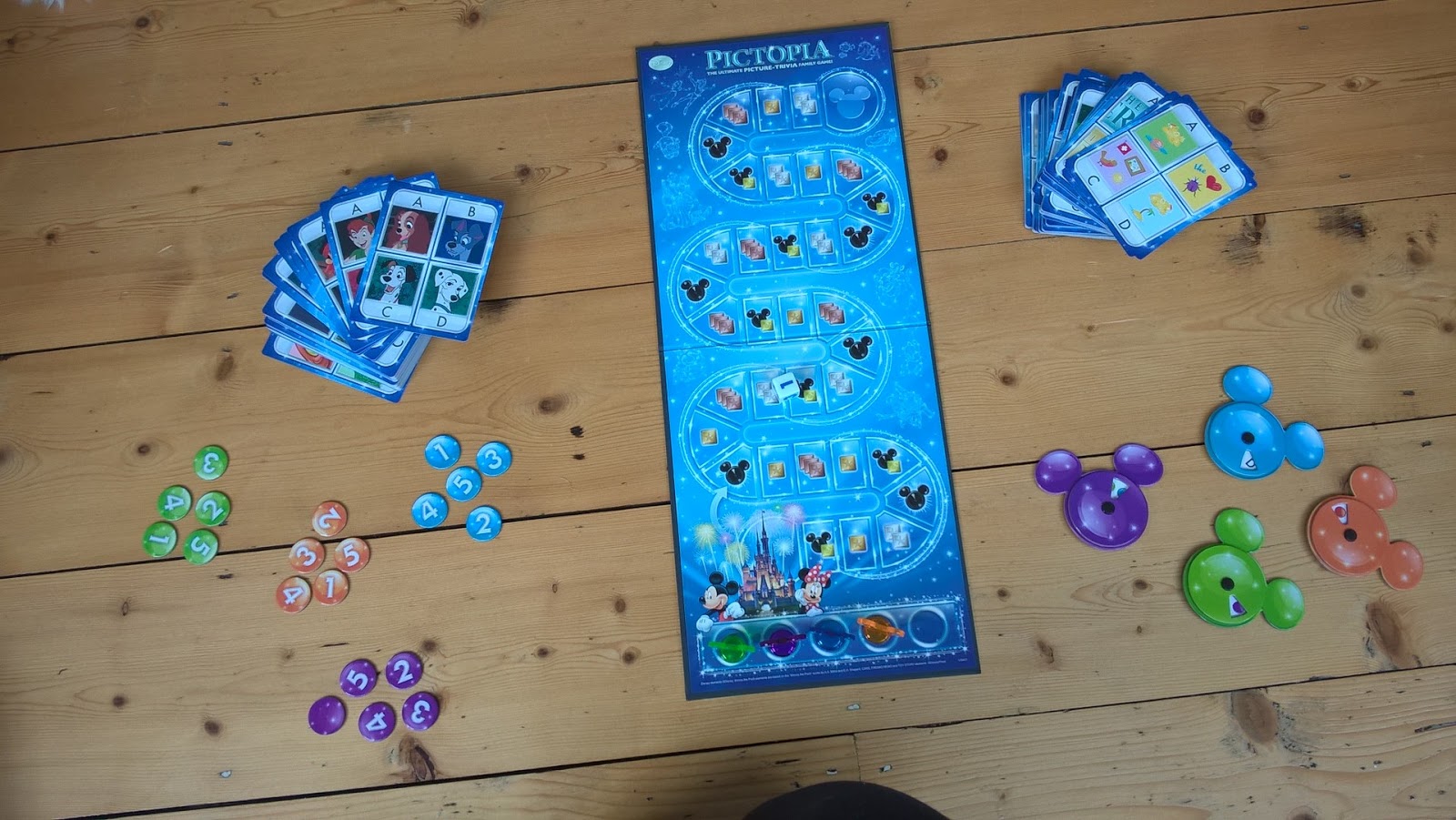 Families team up to play a trivia game with 1000 questions covering the world of Disney.  Not only is it competitive, but it’s also a team game too.  Everyone gets a chance to show off their knowledge from Disney Junior and Disney XD to the Disney Parks and classic films (hurrah!).

The aim of the game is to reach the castle space on the board by moving your counter each time you answer a trivia question correctly.

You are given 5 wager tokens (to bet on the likelihood of you getting the right answer) and a cute answer dial in the shape of Mickey’s ears which allows you to secretly select your answer which is then revealed when everyone has set their dials.

Players take a turn being the host so they get to choose a card to read. The roll of the die selects the question the host asks – and there are 5 types of question which may come up. 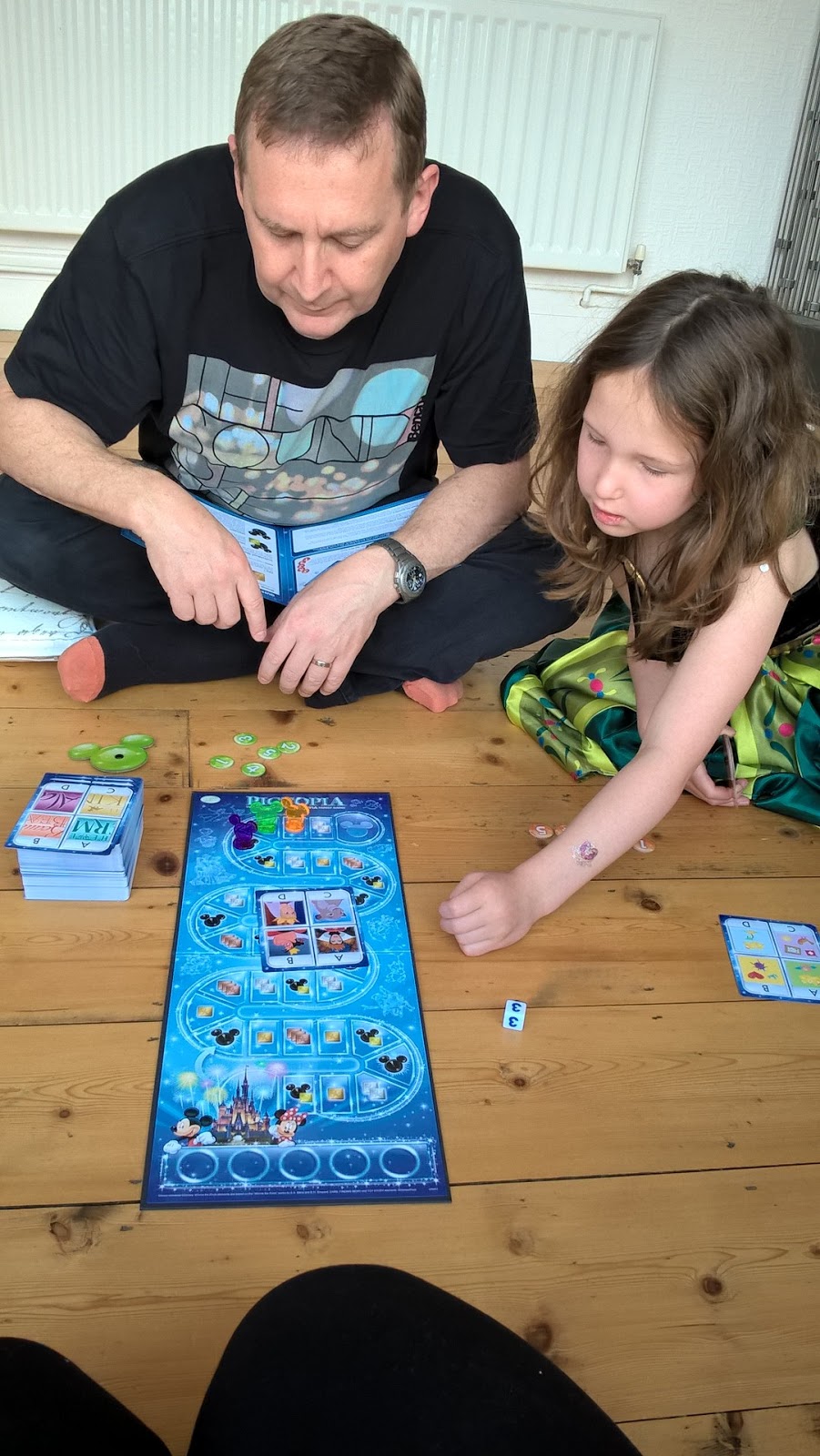 But before the question is asked, you have to look at the card to see if you recognise the films/clues and then bet one of 5 wager tokens depending on how confident you are that you know the right answer.

If you get the answer right, you move the same number of spaces on your wager token.

The game is very well thought out but it may take you a while to get to grips with the rules. It is definitely more suitable for the over 7’s, although Ieuan was able to answer some of the questions. The questions which delve a little into the personality of the players (the Spotlight questions) are a nice touch.

Once again, we were no match for Caitlin who particularly liked the secrecy of the answer dial.  If there is one aspect I thought was possibly unneeded, it’s the wager tokens and for younger kids, I think you would be better off just rolling the die again and moving the matching number of spaces.

Caitlin is itching to play this one again and we’ve promised her a rematch this weekend.  There is also a free Pictopia app with bonus content and a lightning-round final challenge which we will download, although, fellow Lumia owners, be aware that the app is for iPhone or Android only.

Disney Pictopia is available from Amazon or Waterstones.