Win A Degustabox Of Foodie Treats

Degustabox is a monthly subscription food box service with each box containing between 9 and 14 products from well known and / or up-and-coming brands. Each box costs £12.99 including delivery and the value of the box contents is promised to be far greater than this, based on what you would expect to pay if you bought the items in the shops.

Once you have received your box, you are encouraged to review the products and let the brands know what you thought – whether you liked the item or not.

As with all monthly box subscription services (as you know I have regularly reviewed Glossybox, the monthly beauty box subscription service), the thrill is in the surprise of the contents and the anticipation of receiving a present just for you.  Yes I know you are supposed to share it but we mothers have to, er, vet the contents thoroughly, don’t we?

I was sent the September box to try and it contains a lovely mix of sweet and even boozy treats. There is a selected list of products for each month published on the website but not everyone receives the same combination.

Here’s what was in mine. 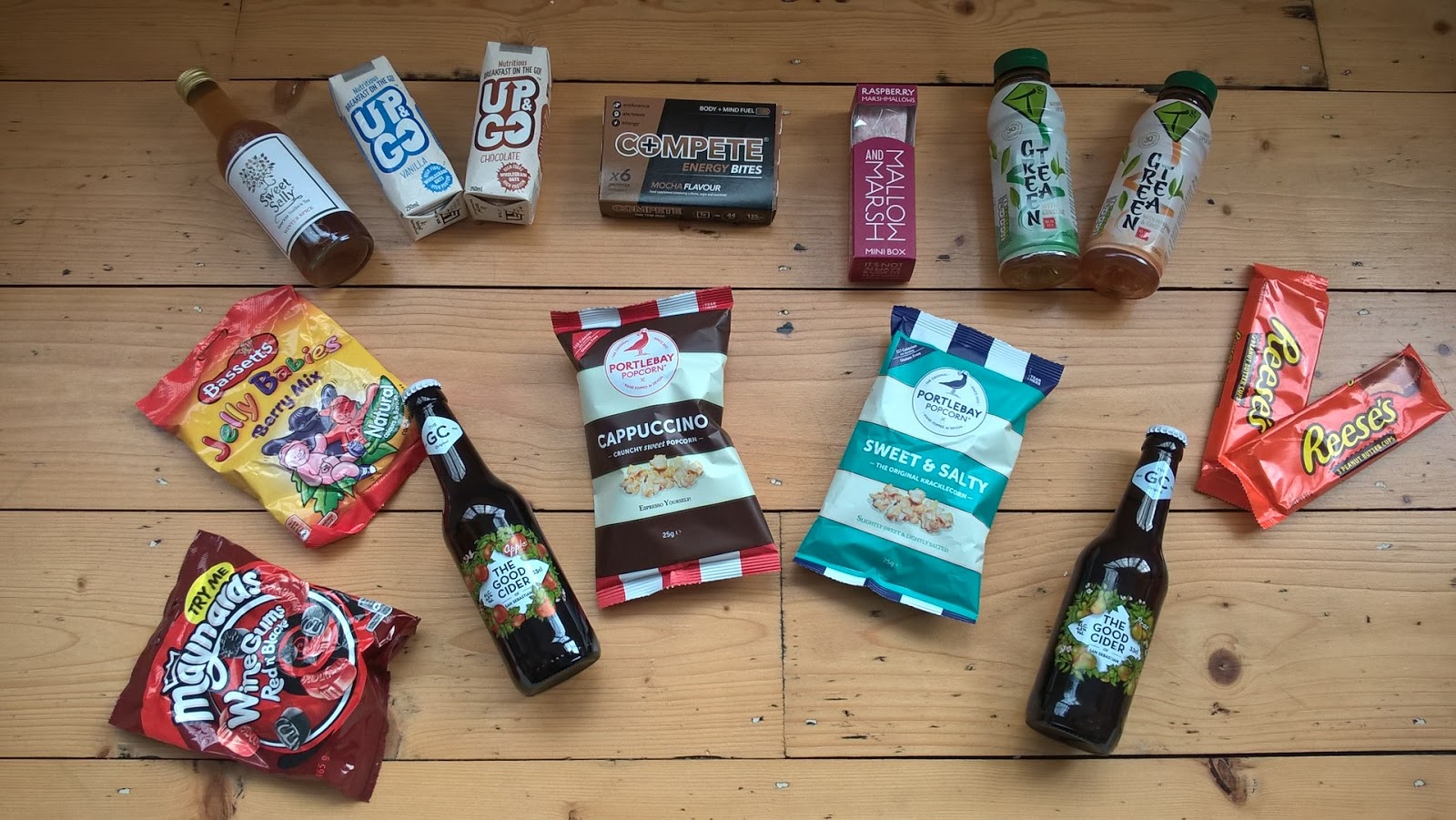 There was a mixture of brands I already knew but quite a few I’d heard of but not got round to trying. Actually, I think this box was designed specifically for me.

There were 8 products from September’s selection and 2 which Degustabox call their “Db’s Discoveries”.

Up & Go is a nutritious breakfast drink from Australia intended to replace a bowl of cereal and milk when you are rushing out of the door in the morning.  Complete® Energy Bites are low calorie chocolates infused with caffeine.  They say that 1 energy bite is the equivalent of a 1 large premium coffee.  I won’t be trying these in the evening but they might be ideal for the mid afternoon, pre-school run slump!

I have to say that, although I am prepared to relinquish custody of the wine gums to the Husband, everything else in the above picture is mine – and if you haven’t tried a Reese’s Peanut Butter Cup, you really need to.

Lastly, there were two bottles of cider (1 apple, 1 pear) from Spanish cider producer The Good Cider of San Sebastian and a bottle of Sweet Sallly Tea, Ceylon black tea with Spanish oranges, Sicilian lemons, suger and a blend of cinnamon and cloves.  Both brands are new to me.

The 2 “DB’s Discoveries” this month were Portlebay Popcorn (in cappuccino and sweet & salty flavours) and TG Green Tea (with Ginseng, and with Mandarin & Ginseng).

Degustabox also include a cheat sheet detailing all the brands and what you could expect to pay for them in the supermarket and a couple of handy recipes to try out the contents of the box.

My only quibble is that my recipes were for soups – lovely but nothing in the box to make them with. One of the other listed products for September was a Greek olive oil from The Olive Shop which would have been used in both recipes so I’m not sure I got the right leaflet.

The total retail value of the box is £24.97, good value given the cost of the box was £12.99.  If you like the excitement of a monthly present and enjoy trying out new brands, I think Degustabox is a great scheme.  I’d place it firmly in the ‘treat’ category but the price is low enough to make it attractive.  Currently, if the four of us go for a coffee and a bun, for example, we usually end up paying around the £15 mark.  (Yes I know, find the thermos!).  A Degustabox subscription would also make a great gift.  You can cancel at any time, as long as you give them sufficient notice to stop next month’s box.

Please note, though that Degustabox can only deliver to Mainland UK and not to Northern Ireland, the Scottish Highlands and Islands and you must be over 18 to order.

I have an October Degustabox to give away to one lucky winner and no, I can’t tell you the contents because it will be a surprise.  Simply enter via the Rafflecopter below.  Sorry, but Mainland UK entrants only.  The giveaway will end at 11:59 pm on Friday 2nd October 2015.

If you don’t win but would like to give Degustabox a try, I also have a discount code for first time subscribers for a very generous £6 off your first box. Simply enter BLDEG15 at checkout.

Reminder: all entrants need to be
resident in mainland UK (excluding Northern Ireland and Scottish Highlands and
Islands) and over 18.

What Will You Do With An Extra…

My Son Is A Hamster And Other…