UPDATE: 09/10/2020 Jangle is no longer available but there are many alternative pocket money apps for kids.

If only there was a way of solving the pocket money problem.  It’s difficult to know when to give pocket money, how much and on what basis.  What if there was a way to teach kids about the value of money and empower them to make their own (guided choices) whilst earning their treats?

I recently got the opportunity to meet entrepreneur Sarah Willingham (Dragons Den) and the lovely people at Experian and Pfeg (Personal Finance Education Group – part of Young Enterprise) who have been busy creating an app for children aged 7-11 which will teach them how to save and, more importantly to understand the value of money.

Jangle is a clever piece of software which allows the creation of savings pots for specific goals such as buying an iPad or yet another Lego collection. (Ieuan has recently spotted the Millennium Falcon Lego set and I really don’t think I’m emotionally ready for that level of foot pain and general frustration).

The child decides on a savings goal which is authorised by the parent.  The child can watch the pot grow as they earn (yes – you read that right – earn) the money by completing tasks around the house or selling unwanted toys or clothing.

Rather than just hand out pocket money or succumb to pleading and all-out stropping in the supermarket, Jangle gives parents a valuable negotiation tool, and children a framework for understanding that there is a direct correlation between earning and spending.

It will also teach children how to be a critical consumer and how to get the most from the money they save.

It’s really important that children learn about finance at a young age because, by the time they reach their teens, spending patterns are generally firmly entrenched.

We all know students who have blown their student loan on nights out, beer and clothing before the end of the first term.

And we probably all have friends who live hand to mouth and struggle to put anything by for a rainy day, even though they don’t deny themselves any treats.

To me, parenting is about teaching your offspring to survive and thrive in life – and educating them about finance is pretty key in my book.

Did you know that many adult money habits are set from the age of seven (Cambridge University/Money Advice Service (MAS) Research 2013), yet there is no statutory provision for financial education across UK primary schools (PFEG).

Pfeg (Personal Finance Education Group part of Young Enterprise) have found that, on average, children begin to receive pocket money aged seven, own their first mobile phone at eight, and purchase items online at 10, with one in five having used their parents’ or older siblings’ credit or debit card to purchase these items.

Children can open a bank account and have a debit card at 11. At 18 they can apply for a credit card or loan, and before they leave school they have to make crucial decisions about jobs, student loans, and living independently.

Now more so than ever, parents need to be able to talk to their children about how to manage money well but it’s not something that parents often find easy

Parents of young children are less likely than the average population to feel like they are good at managing their money (Experian Consumer Affairs TNT Research April 2015).  “Rather than waiting until their son or daughter has ‘earned’ the privilege of being treated to something new, six in ten parents admit they buy their children the latest trends and collectables as soon as they ask for them” (Skipton Building Society Research 2012).

It’s so easy to cave in sometimes just for peace and quiet – but we are not helping our kids by doing this. 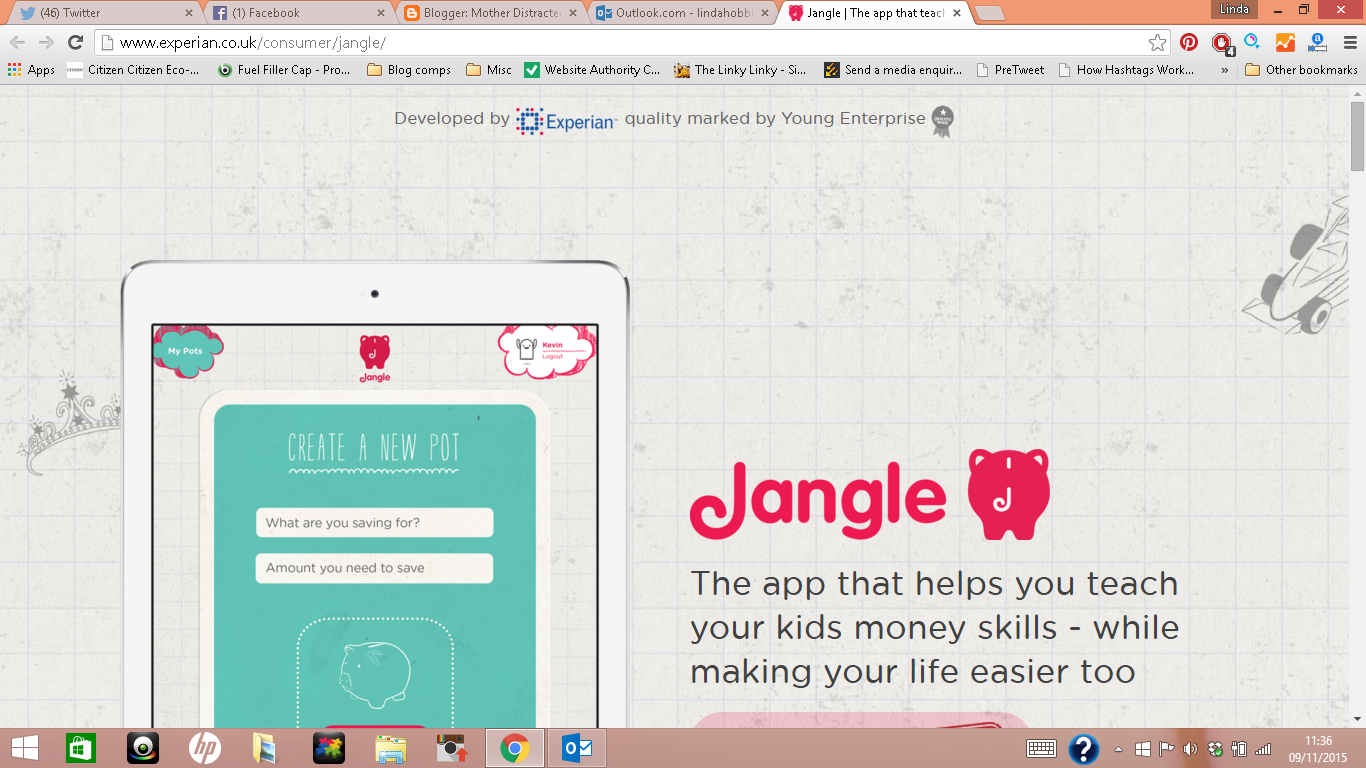 Actually, it’s already working.  Ieuan announced he wanted a transformable bat cave (a mere snip at £40) but then paused and said he was going to ‘jangle it’.

The family cars are going to be spotless next year and I’m hoping the pocket money problem will be solved.

The Jangle app for iPad is available to download free from the IOS app store.