74% Motorists Fear Being Ripped off by Garages – Can You Trust Yours?

We’ve been pretty lucky with our cars so far.  The Husband has an 8 year old Beemer and I have my beloved and equally old Skoda Roomster. 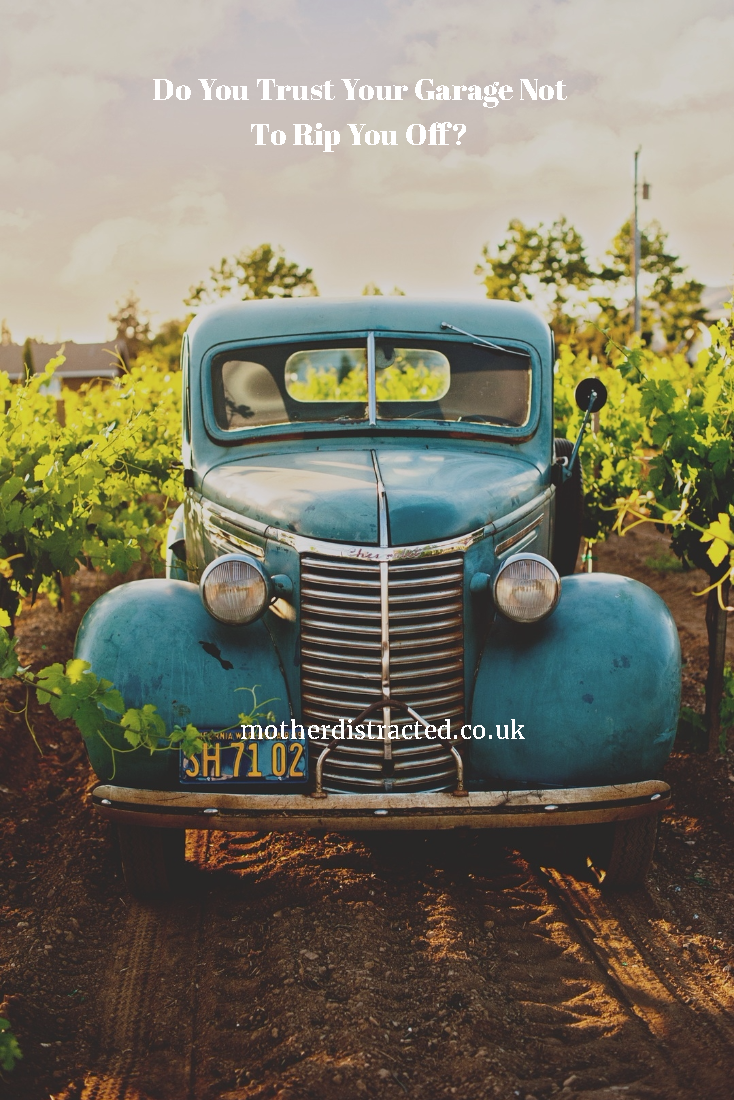 In the absence of much mechanical knowledge and having an inherent distrust of garages, we tend to stick to where we know (i.e. the local dealerships).  Whilst the service is reliable, the price is reliably higher than some of the smaller independent garages.

But how do you know who to trust.  We’ve all heard the horror stories about parts not being replaced, or replaced with second-hand bits.  Then there are the tales of oil not changed or topped up, brakes not checked and unnecessary repairs undertaken to make a quick buck.

Let’s be honest – when the car is in for its service or MOT, everyone dreads that phone call from the mechanic where they start listing everything that needs to be fixed.

How do you know if they are telling the truth?

74% of respondents to a survey of 1,000 car owners, by BookMyGarage.com, an online booking directory of UK garages, stated that either hidden costs or being oversold were their main worries when using a garage.

Depending on where we live, mind you, we seem to be more or less relaxed about being ripped off

People living in North West appear to be the most worried most about hidden costs, with 43% of those surveyed indicating that this was an issue for them. However, only 22% of Welsh respondents said that the chance of garages hitting them with hidden costs was a major concern.

As Karen Rotberg, director of BookMyGarage.com, says: “Our survey shows that garages have a long way still to go to build trust with their customers. As cars become more complicated, due to new technologies, many motorists don’t always know what maintenance their cars need and feel that mechanics take advantage of this lack of knowledge.”

“This is why we launched BookMyGarage.com. By being able to compare prices of local garages and see genuine customer reviews, garages and customers can start to trust each other again.”

What customers want from their garages?

• Only 9% fear poor customer service when booking a garage, which suggests that financial issues, rather than customer care concerns, are at the front of customers’ minds

• Reputation is the key deciding factor when choosing a new garage, according to 54% of the UK sample.

BookMyGarage.com is a nifty website which gives you a list of garages according to your postcode, together with the services they offer.

Just by popping in my postcode I’m told there are 66 garages near me and the date of my MOT renewal. There’s a map of their location and I can compare three garages side by side. I can then book online and there is a contact number which allows me to talk to an expert mechanic.

Some of the garages already have customer reviews available to read which is just what you want to have to hand.

Certainly worth a look if you have the dreaded MOT or service approaching.

A Car Maintenance Checklist To Keep Your…

How to Save Money for Your Next…

PREVIOUS POST
"Simple Tips For Hot Healthy Hair"
NEXT POST
"After Eight Is Too Late – Could Your Child Have An Undiagnosed Sight Problem?"