This week I’m talking about keeping your older boyfriend a secret, dealing with ‘psycho girls’ and telling a friend her child is too badly behaved for your child to play with.  What would you do? 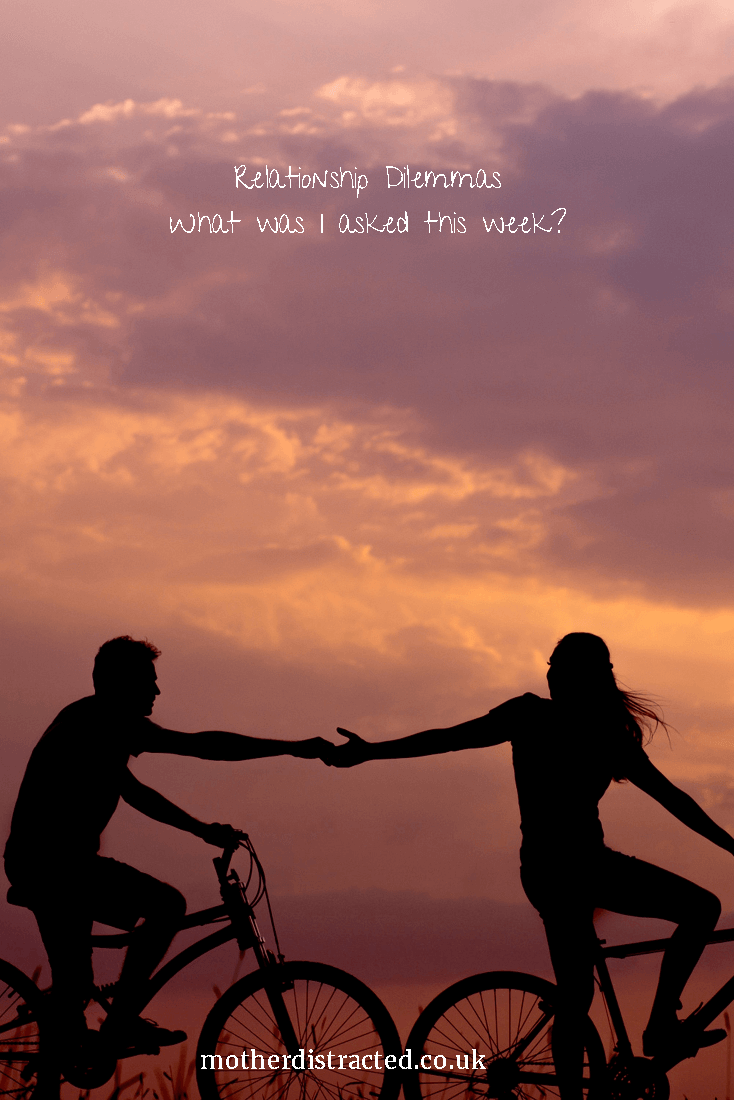 Here are some of the questions I’ve been asked this week.

A: It depends on how old you are. I’m sure you don’t need me to tell you that if you are below the age of sexual consent in your country then your boyfriend could end up in a lot of trouble – and so could you if you are not using contraception.

As a mother, I would want to know about your boyfriend. The fact that you are unsure whether to tell them tells me that there is something about this relationship that they will disapprove of.

If you are mature but worry about an age gap relationship then, assuming everything is OK, then at that stage, it is your business and if you choose to continue with the relationship you may have to make a choice between your boyfriend and your parents.

But I wonder why you feel you can’t tell them and even introduce him to them. For your peace of mind (and safety), that is what I would urge you to do. And if he’s a decent man, he should be telling you the same thing.

Q: How can my boyfriend get rid of a ‘psycho’ girl?

A: I’m guessing you are very young. And rather jealous.

I’m also assuming that the ‘psycho’ girl has a thing for your boyfriend and is chasing him. The person who needs to sort this out is your boyfriend.

It’s very common in this situation to focus on the other woman, whilst the man gets off free whilst the women fight. Is this girl an ex-girlfriend?

I can sense that you are feeling very threatened but getting bitchy and demanding won’t help. Has your boyfriend been encouraging this girl?

Sometimes we choose to ignore what is going on right under our nose. Tell him to ‘shape up or ship out’.

Q: Is chatting with strangers on the internet bad if you already have a girlfriend or boyfriend?

A: Not bad but it can be dangerous. Do you mean general chat or sex chat?  You don’t say how old you are but I’m guessing you are quite young.

I’m sure you don’t need me to tell you that it is often impossible to know who you are talking to on the internet.

If you need to do this despite having a partner I would suggest that the relationship is pretty unfulfilling and it would be fairer to them to let them go and wait until you are ready to commit to a relationship in the real world – rather than a fantasy one in cyberspace.

Q: When children are not disciplined (or guided) and not held accountable for their actions does that cause emotional problems?

A: Emotional problems for whom? As parents, having to constantly deal with an out of control child is exhausting.

I believe children actually need boundaries in order for them to feel love. They need to know their place in the family and how far they can go. They test our love all the time to see if it will break.

So I agree with you that an over liberal parenting style can result in a child who, paradoxically, feels unloved.

If nothing you do ever makes a difference would you feel like you mattered?

And if we don’t set boundaries for our kids whilst they are under our care and guidance, what will happen to them when they enter the world of work and find that they are expected to toe the line and act like mature, responsible adults.

Q: My boyfriend just told me he thinks about his ex every day and wishes he could go back and change his mistakes that made her leave. How do I even reply?

A: I really feel for you. That must have been so hard to hear but the only way to view it is that he has done you a favour but letting you know that his heart is not really in your relationship.

It is obviously his guilt talking and I wonder what the ‘mistakes’ were that made her leave. If he was unkind or controlling then I think you have just had (no matter how awful it feels like now), a lucky break.

There is also something a little controlling in the fact that he is making YOU responsible for his upset rather than manning up and dealing with the consequences himself. He sounds very immature.

I would suggest that you separate for a while so that he can get clear in his head who it is he really wants to be with.

We always want what we can’t have and it’s the idea that he can’t have his ex back that’s making her seem so attractive.

But he’s an adult. You are not responsible for him and you DO deserve someone who wants a relationship with you.

I suspect most women’s advice to you would be “show him the door”.

Q: How do you tell a friend that you don’t want your 7-year-old children to be friends because of their child’s behaviour issues?

A: I don’t think you can if you want to keep her friendship.

Could you find a way for your children to play together under supervision with you and your friend and make her aware of when her child’s behaviour is unacceptable?

You don’t say what the ‘behaviour issues’ are. It would be very hard on your friend to abandon her if, for example, her child is autistic or has a problem like ADHD. She needs your support, not your censure.

If her child is just exhibiting bratty behaviour and bullying your child then you either have to tell her straight out or see less of her. Your child’s health and safety has to come first.

ALL 7-year-olds are capable of bratty behaviour and their friendships go from best friend status to all-out hatred in a heartbeat – and back again the next day.

Are you sure YOUR child is a little angel? Could they be contributing to the behaviour in some way?

Can you not sit down with your friend over coffee and tell her openly that you have noticed her child behaves in these ways and is there a reason why? She may confide in you and tell you that she knows but needs help dealing with it.

Make sure you’re not about to jettison a nice friendship due to a couple of 7-year-olds’ stroppy – and entirely normal – behaviour.