It’s always difficult to know what to buy the men in your life, isn’t it?  But you can go far wrong with some great DVDs and here are 5 suggestions for movies for him that are sure to prove popular. 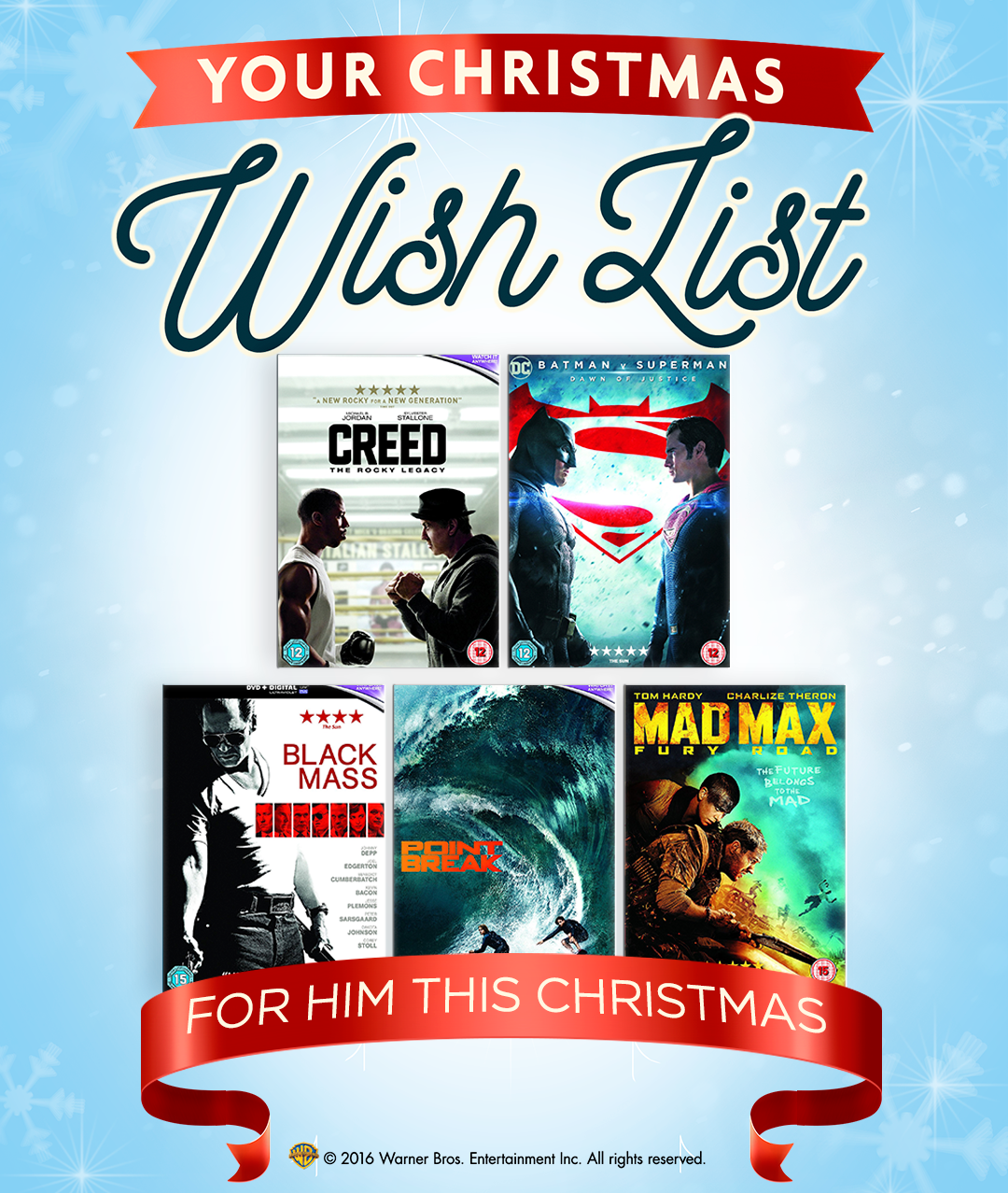 So grab the mistletoe and get ready to find the perfect gift for that special someone this Christmas. Warner Bros. has the ultimate selection, whether you’re looking for him, for her, or for festive favourites to get the whole family in the Christmas spirit.

For him, they have a great selection of festive thrillseekers, including Batman Vs. Superman, Creed, Black Mass, Point Break and Mad Max Fury Road.

Great movies for him (or her!)

Fearing the actions of a god-like Super Hero left unchecked, Gotham City’s own formidable, forceful vigilante takes on Metropolis’s most revered, modern-day saviour, while the world wrestles with what sort of hero it really needs. And with Batman and Superman at war with one another, a new threat quickly arises, putting mankind in greater danger than it’s ever known before.

This is a new chapter in the Rocky story from acclaimed director Ryan Coogler.

Michael B. Jordan plays Adonis Johnson, the son of deceased world heavyweight champion Apollo Creed, with boxing in his blood. Looking to win his own title, Adonis heads to Philadelphia and convinces his father’s rival-turned-friend, Rocky Balboa (Sylvester Stallone), to train him – even as Rocky battles his own deadly opponent outside the ring. Now Adonis has a shot, but first, he must develop the heart of a true fighter.

In order to bring down his opposition and protect himself and his family, Whitey agrees to turn informant against the Angiulo Brothers at the request of FBI agent John Connolly (Joel Edgerton), a friend of Whitey and his brother Billy (Benedict Cumberbatch), the President of the Massachusetts Senate.

When Whitey uses his connection with the agent as a cover for committing murder and Connolly’s control over his informant is scrutinised by his boss Charles McGuire (Kevin Bacon) and prosecutor Fred Wyshak (Corey Stoll), he is left with no choice but to go on the run.

A young FBI agent infiltrates an extraordinary team of extreme sports athletes he suspects of masterminding a string of unprecedented, sophisticated corporate heists. The film stars Édgar Ramírez, Luke Bracey and Ray Winstone and is a remake of the original Point Break film.

Starring Tom Hardy and Charlize Theron, the film finds Mad Max haunted by his turbulent past and convinced that the best way to survive is to wander alone.

Despite this, he becomes swept up with a group fleeing across the Wasteland in a War Rig driven by an elite Imperator, Furiosa. They are escaping a Citadel tyrannized by the Immortan Joe, from whom something irreplaceable has been taken. Enraged, the Warlord marshals all his gangs and pursues the rebels ruthlessly in the high-octane Road War that follows.

So there you have it, 5 great movies for him to enjoy during the festive season.  Which others would you recommend?