When I was a child I went through the typical little girl ‘pony phase’.

Inspired by the drawings of the late cartoonist Norman Thelwell, whose grumpy shetland ponies always made me smile, dad used to take me to the Pontcanna Riding School in Llandaff, Cardiff or pony trekking in the wilds of the Welsh countryside or around the lanes of our village, Dinas Powys.

I had a little velvet covered riding hat and, perhaps rather contentiously today, a blue and silver monogrammed riding crop.

Fast forward 40 odd years and Caitlin, my equally spirited and stroppy daughter, has inherited an equal love of the beautiful animal that is the horse.

We’ve nowhere to put one and the farm which used to supply the ponies (Harry’s Farm)is long gone but there’s still the dream of winning the lottery and buying a property with its own stable and paddock.

I can no longer remember how to strap on a saddle or tack, nor even the correct way to mount and dismount, but the dream is still alive for Caitlin.

Caitlin was recently challenged by Petplan Equine Horse Insurance, leading provider of equine insurance to design her dream horse which, it turns out, has more in common with a unicorn than the short, squat ponies of my youth. 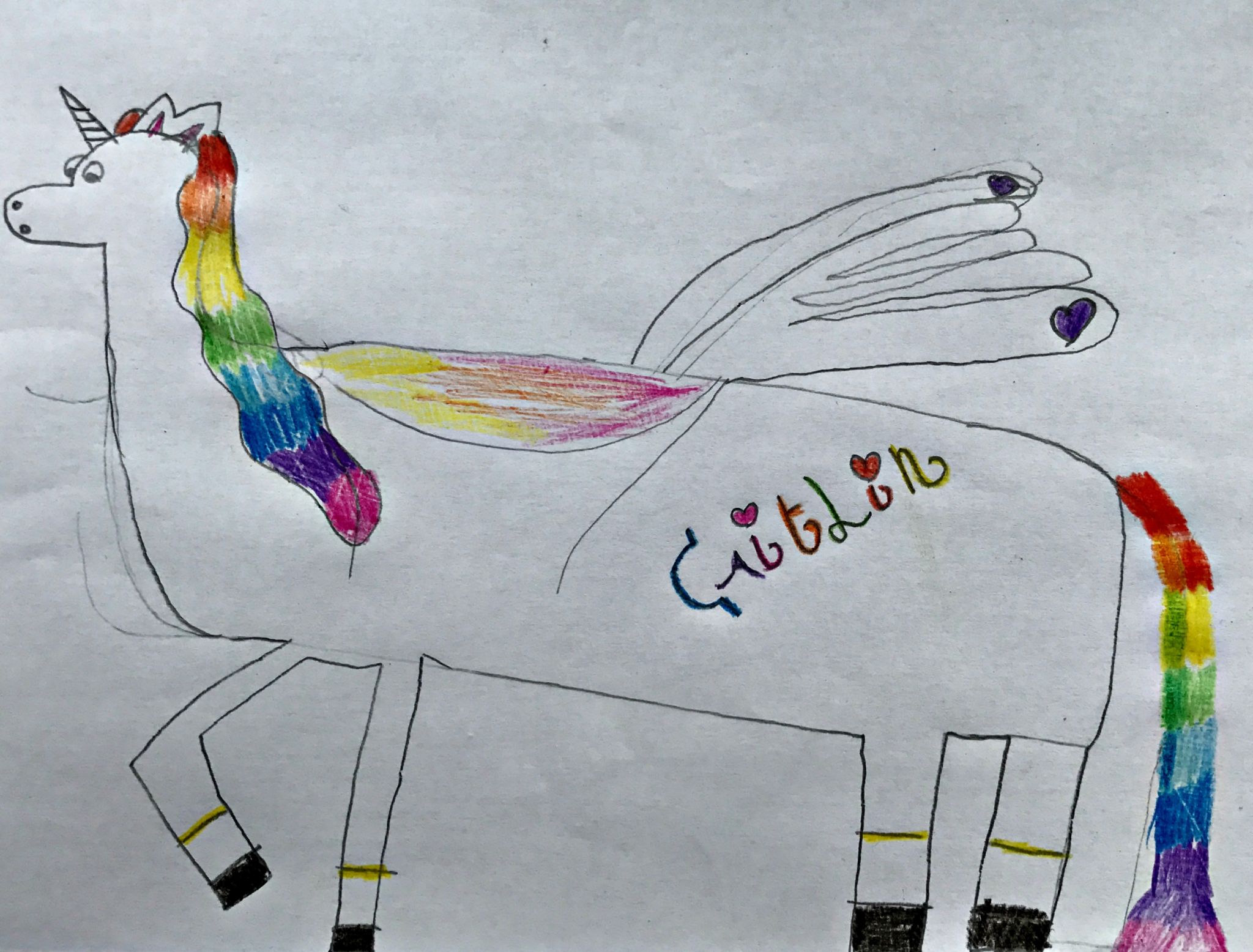 The Husband has, rather pointedly announced that he strongly suspects unicorns don’t exist to which the rest of us tell him that they clearly do because so does Santa and the Tooth Fairy.

Caitlin designed a white and candy-striped beast she named after herself and the lovely people at Petplan magicked Caitlin the unicorn into being.

She has a multi-coloured mane and tail and a large comfy saddle nestling behind her generous wings.

To me, she vaguely resembles a packet of Starburst on legs but Caitlin loves her.

The same magic won’t, however, apply to any vet bills you might find yourself saddled with if you don’t have equine insurance. Whether you are a first-time owner and a casual riders or a top eventer, Petplan Equine provides essential cover in the event of the unexpected – and they are one of the few equine insurance providers who offer genuine “lifetime” policies. 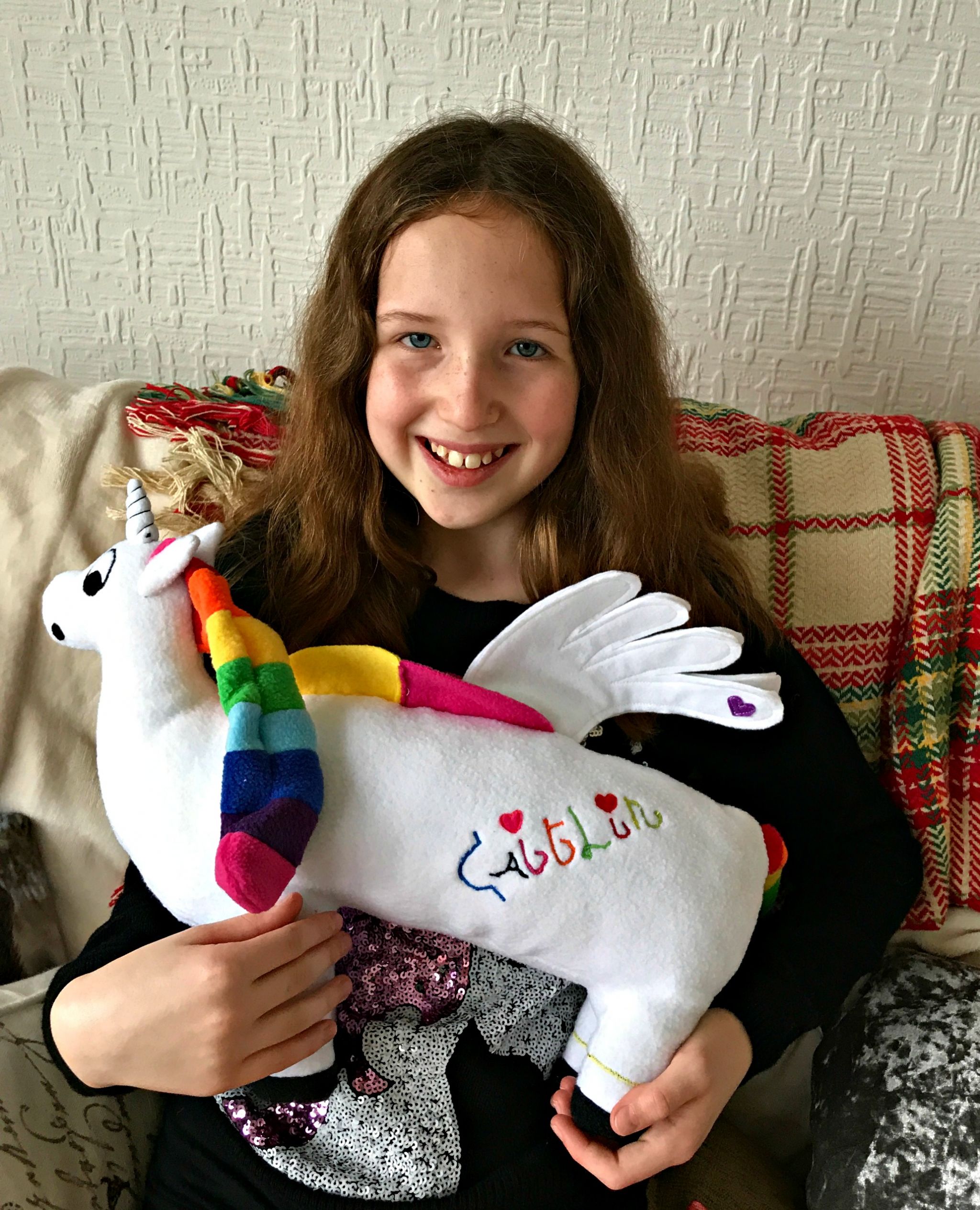 If you’re wondering what you might need equine insurance for there’s:-

Cover for the death of your horse  – insurance against the financial costs of the accident, illness or disease suffered by your horse.

Cover for theft or straying

Public liability insurance – insurance against costs incurred by members of the public suffering personal injury or property damage by your horse.

Personal accident cover – insuring you and anyone else riding your horse with your permission, for death and accidental injury.

Anyone who has ever ridden a horse will tell you that, magnificent beasts though they are, the potential for accident and injury can be quite high.

Petplan also works with more animal rehoming charities than any other pet insurance provider – more than 1200 throughout the UK and in 1994 they formed the Petplan Charitable Trust which has so far raised more than £7 million towards a better, healthier world for animals.

I think Caitlin the unicorn will be staying with us for quite a while but if Caitlin is ever lucky enough to own her own pony, we certainly won’t be forgetting decent equine insurance.

This post has been possible thanks to Petplan Equine but all thoughts are my own.