I first visited Bill’s in Brighton just after my wedding in 2011.  I loved the eclectic mix of oils, olives and kitchen accoutrements and the simple, yet inventive menu with dishes you’d cook yourself at home. Fast forward 6 years and Bill’s has become part of the UK dining landscape with two branches in our home city of Cardiff, one in the centre and the other in Cardiff Bay.  We were delighted to be invited to dine at Bill’s Cardiff Bay restaurant. 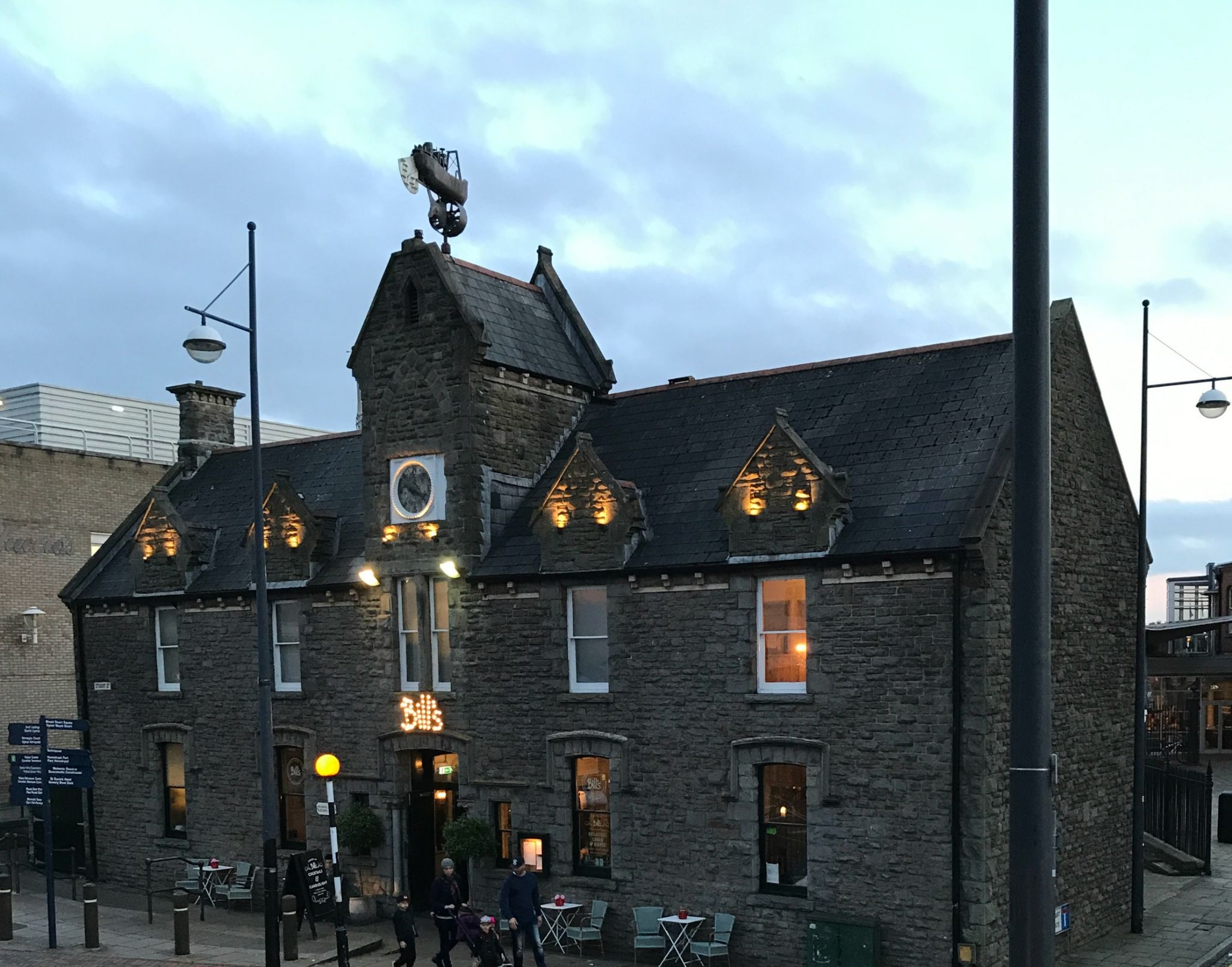 We visited Bill’s Cardiff Bay restaurant last weekend.  Situated in the old Pilotage Building where Woods Brasserie used to run, the place has that slightly off-kilter feel that its town centre sister branch has. 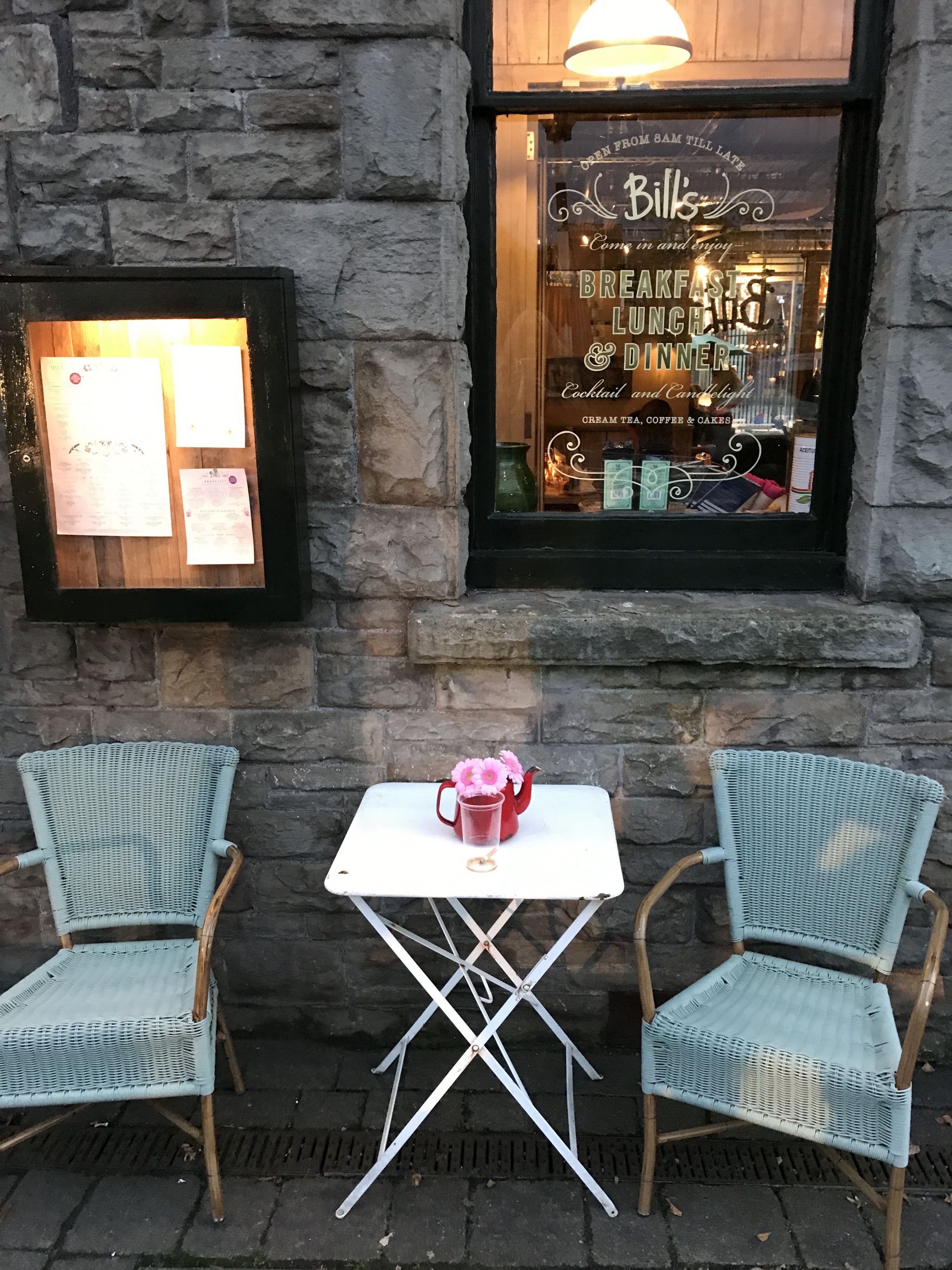 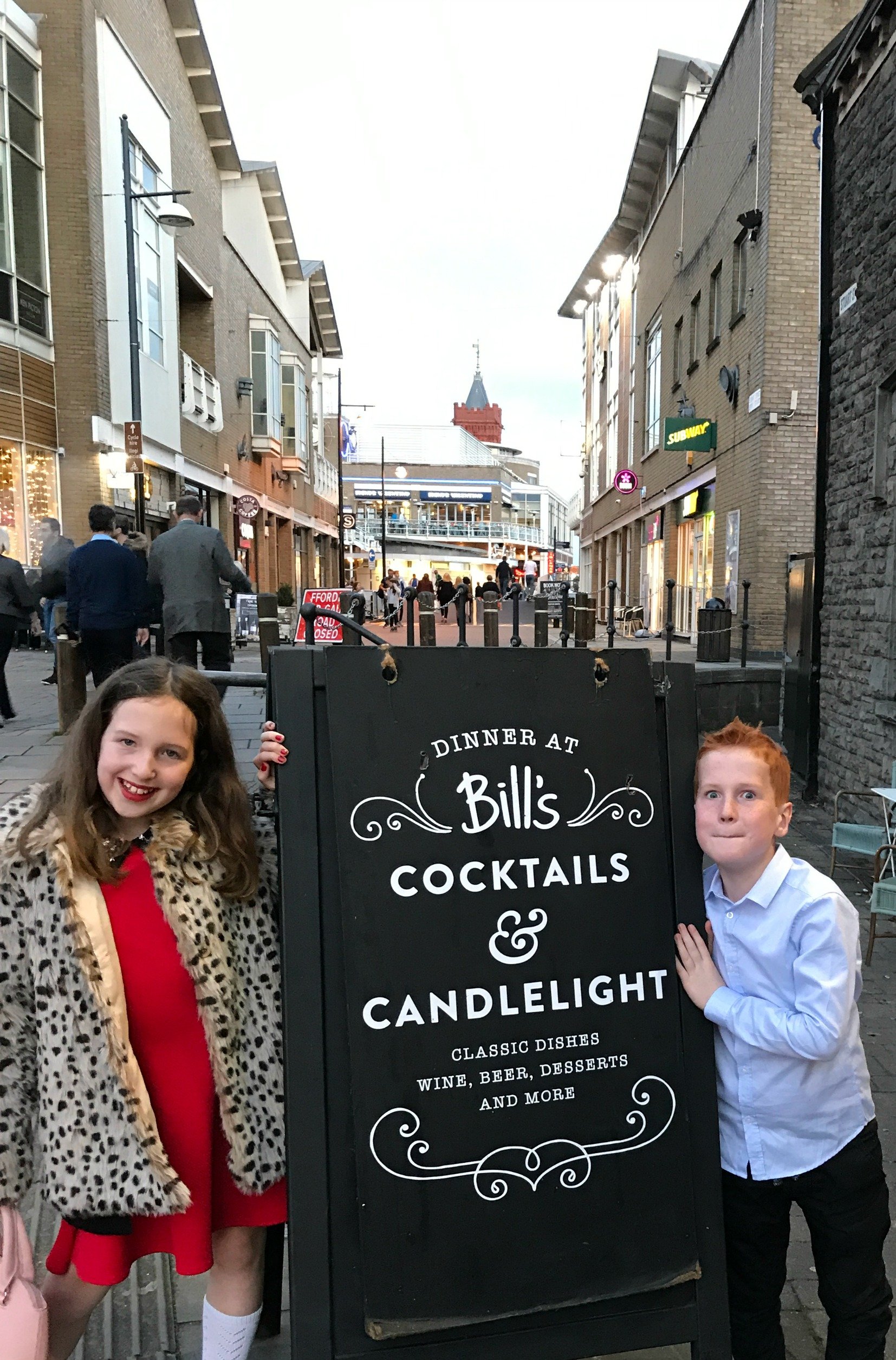 Whilst the space is brightly lit and airy, there are lots of nooks and crannies to sit in, should you want some privacy. 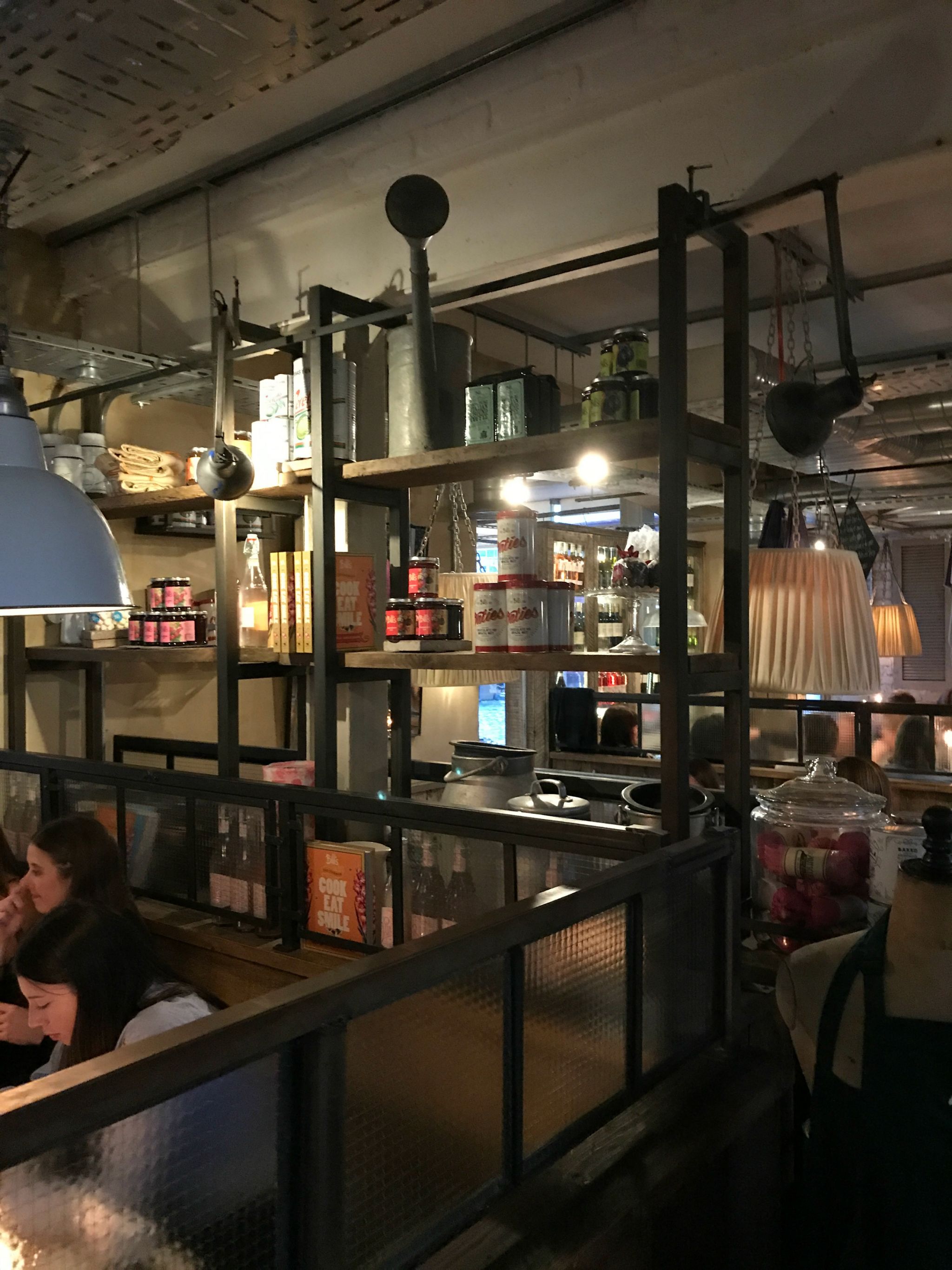 On a dark and rather dismal Saturday night, Bill’s was lit by candlelight for its Candlelight & Cocktails promotion, however, our mission was, as ever, to feed the kids and get Ieuan out of his near-permanent state of ‘hangry-ness’. 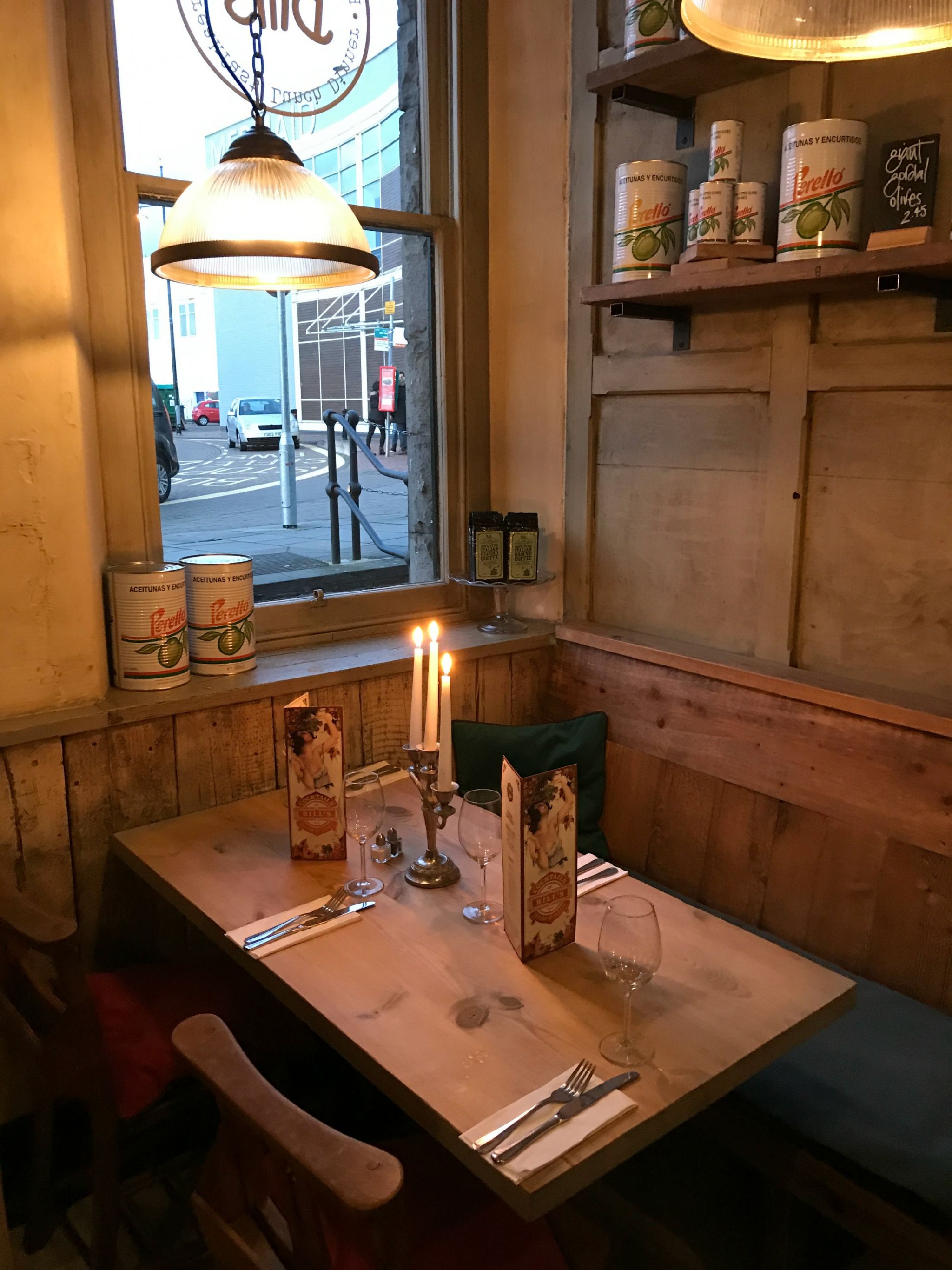 This has become more noticeable since he started playing football for Penarth Town Under 9s.  Caitlin is less worried about food as long as there’s ice cream and she has her lip balm with her.

Caitlin is 10 in November and Ieuan turned 8 in June so they are at an age where the children’s menu is often too small and the adults’ too big (or too expensive!).  Portion size is always a good test for us – as is the range and size of drinks on offer. 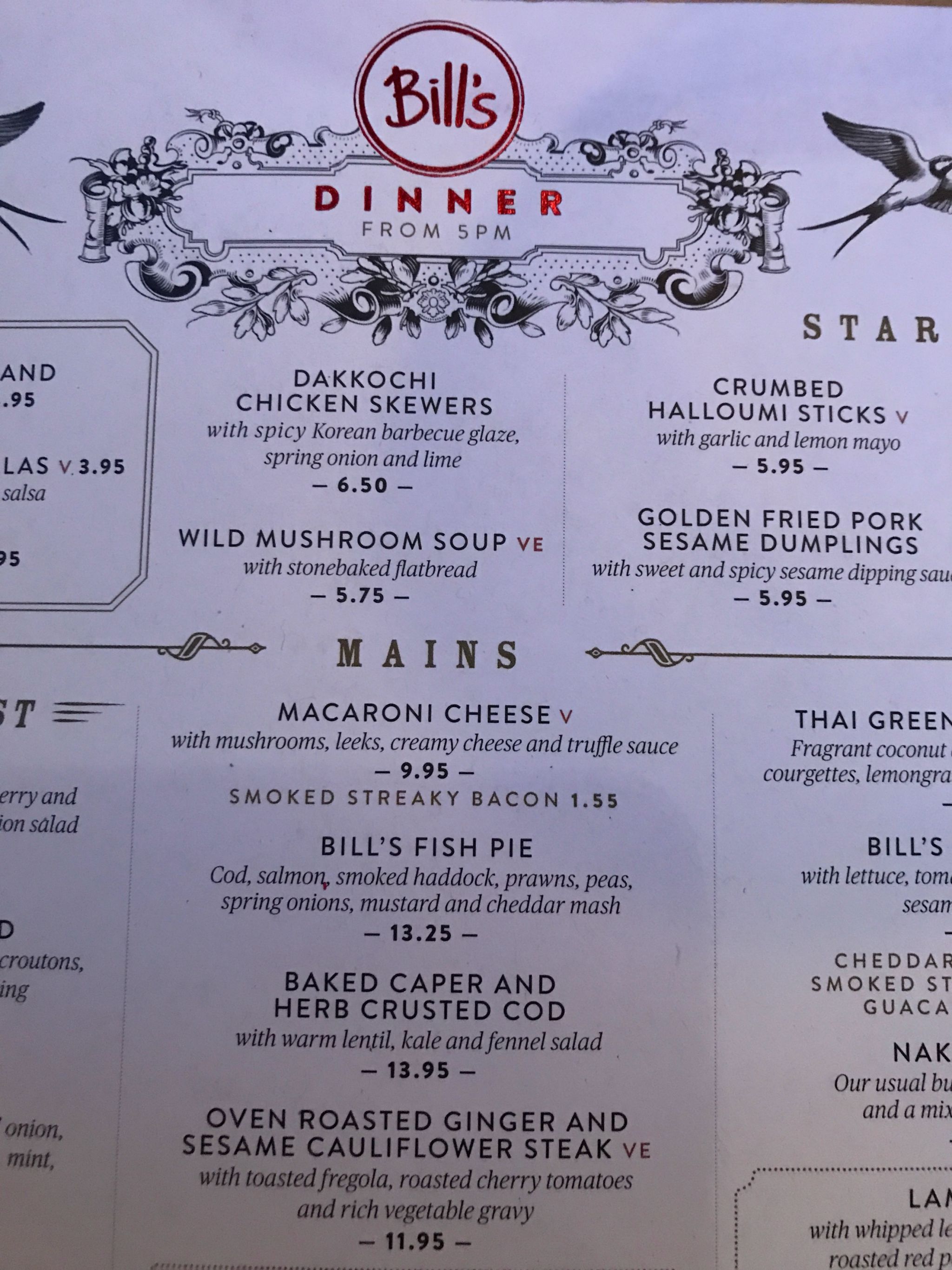 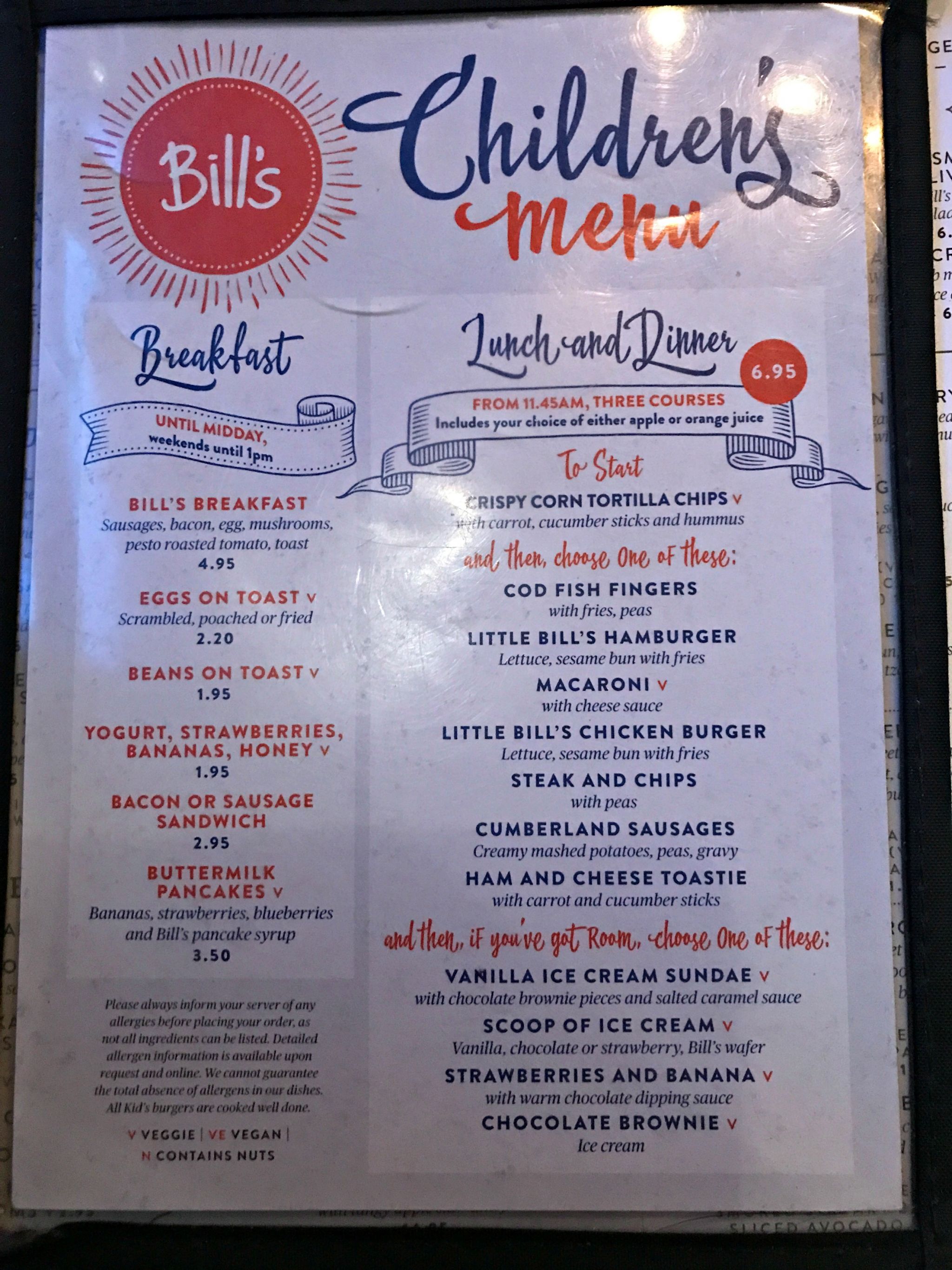 We’re not big on starters but are huge fans of olives so ordered some Giant Green Gordal Olives (£2.95).  These were plump, juicy and, mercifully, stoned. Mat decided to indulge his passion for calamari which came nicely covered in breadcrumbs with a tangy garlic mayo. Unfortunately, he failed to convert Caitlin and me to his cause.

In any case, the kids were happy with their Crispy Corn Tortilla Chips which came with nice fresh hummus and carrot and cucumber sticks.

Children’s lunch and dinner are served from 11:45 am and is priced at £6.95 for three courses to include an apple or orange juice. 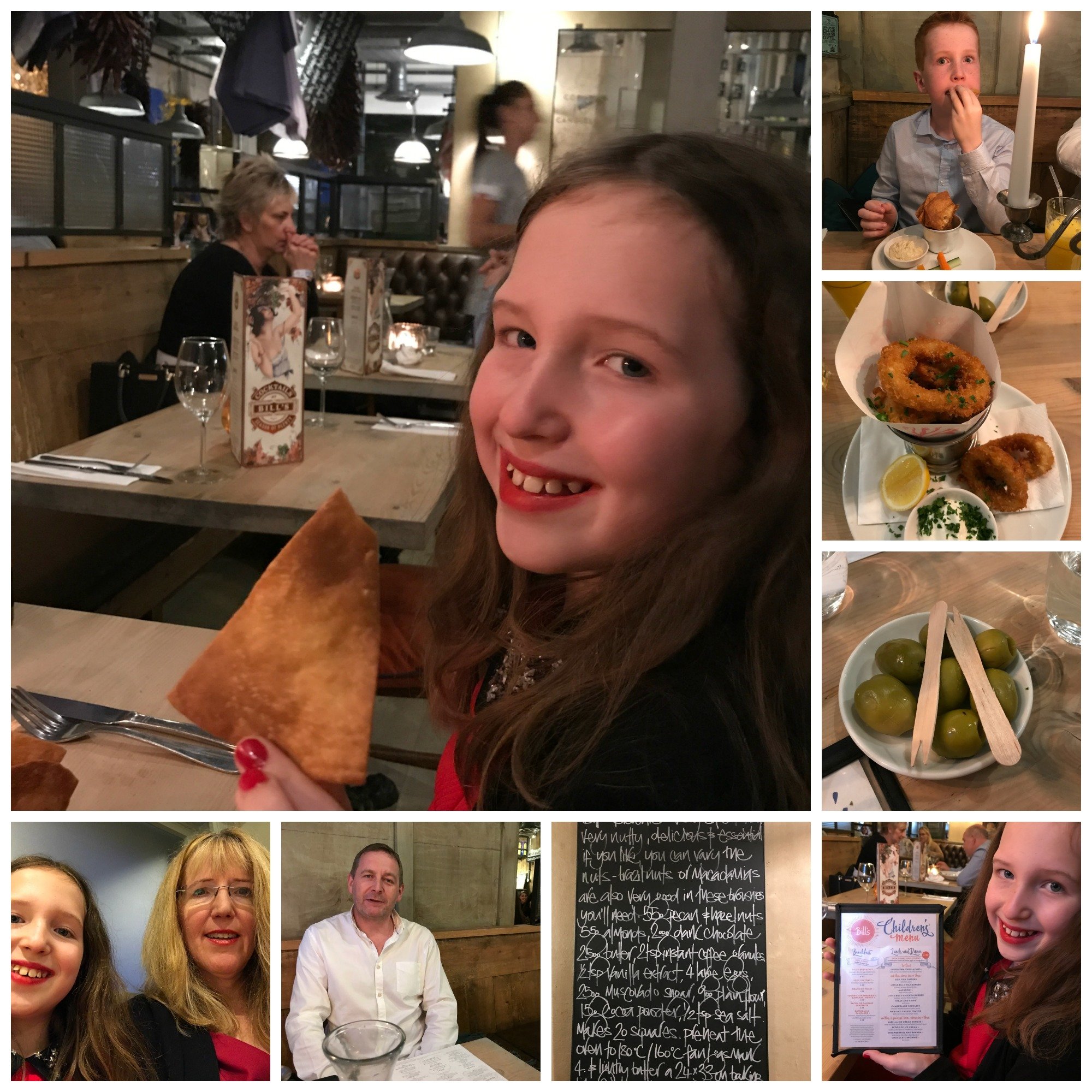 Both kids opted for an off the menu drink choice of orange juice and lemonade. 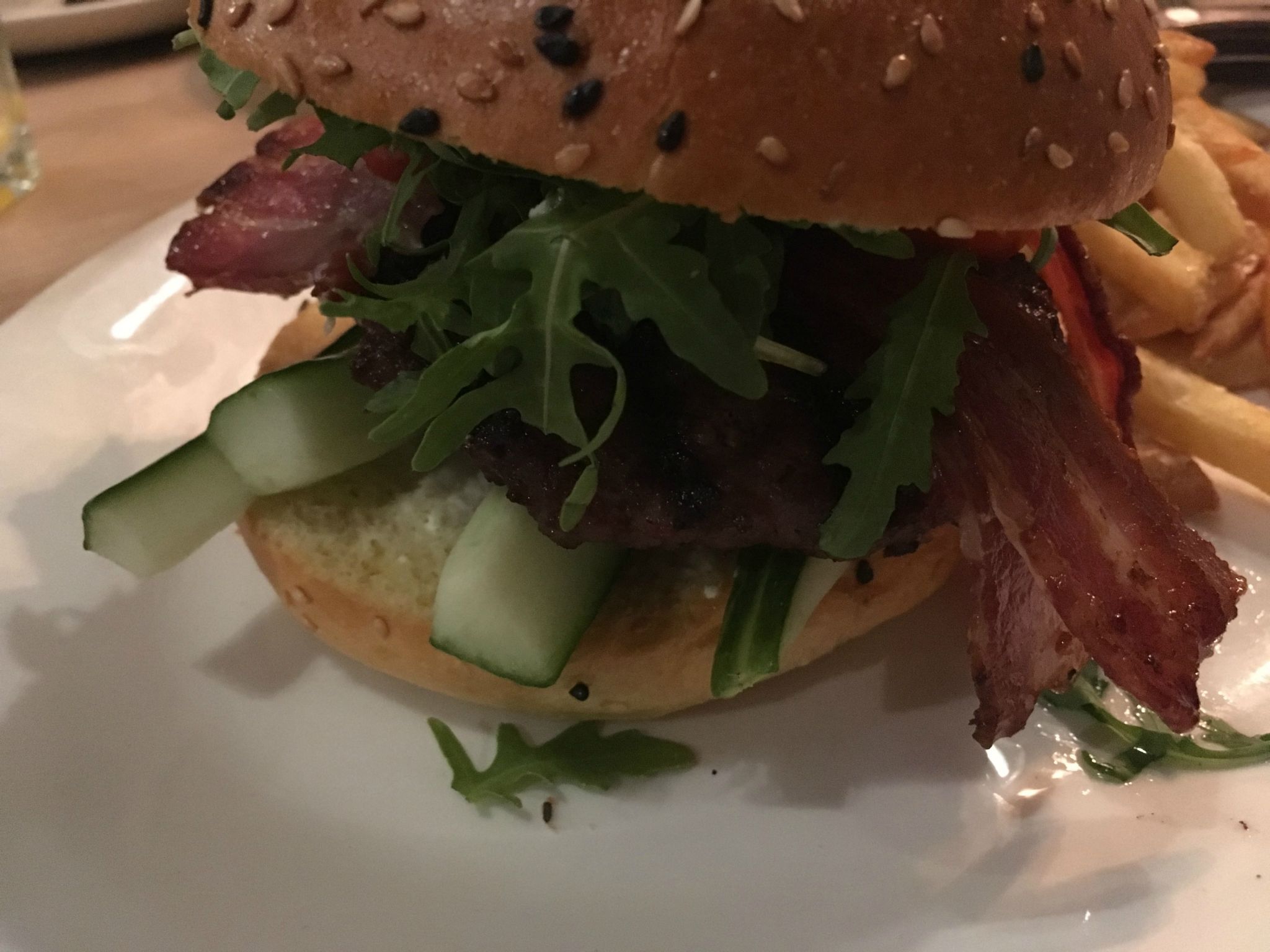 The burger was tender, not overcooked and the bun was filled to bursting.

I chose the Bill’s Hamburger with lettuce, tomato, red onion and a secret sauce served in a sesame bun with fries (£10.50).  Now that the nights are drawing in (as my dad would say), I find the lure of the burger hard to resist and this one did not disappoint.  I would have liked a little extra side garnish but everything was piping hot and juicy. 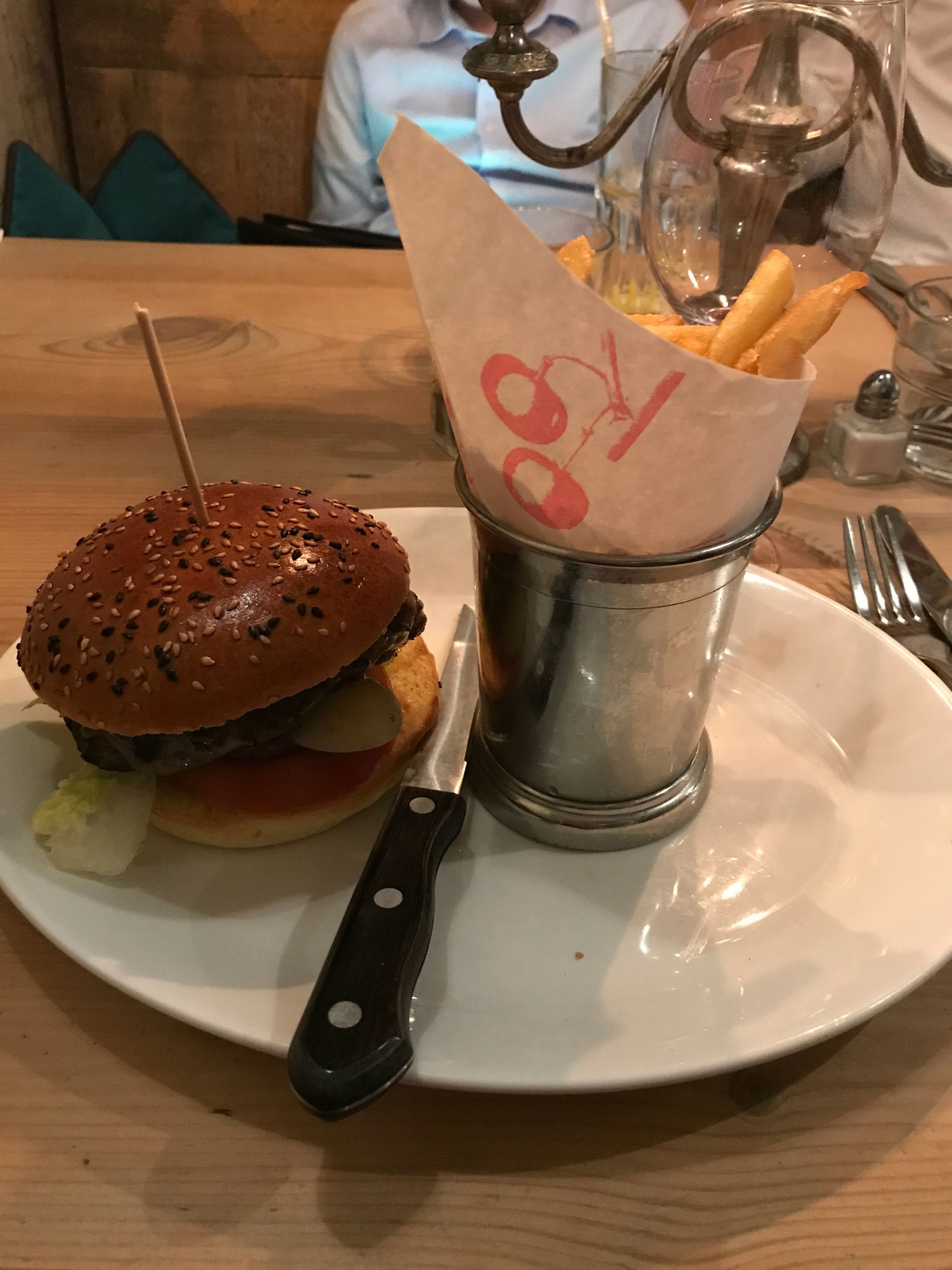 Caitlin had Steak, Chips and a substitution of a side salad instead of peas.  We were impressed by the size of the flat iron steak she received. 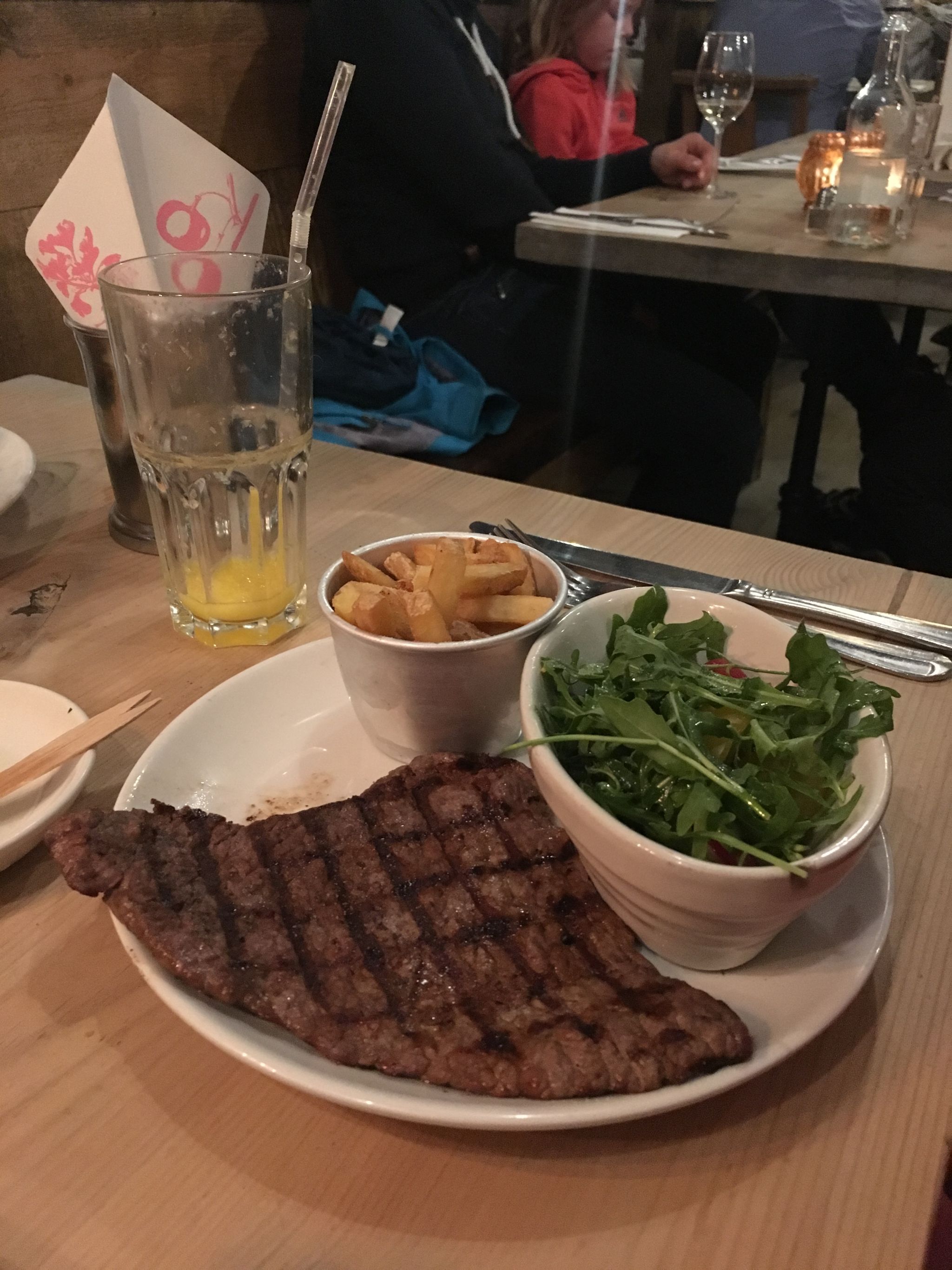 Ieuan had Cod Fish Fingers with Fries and a salad instead of peas.  I have no idea what my kids have against peas but they won’t be swayed.  This does mean we would appreciate the option of baked beans but understandably, most restaurant chains try to encourage kids to at least try a vegetable or two which isn’t covered in tomato sauce. 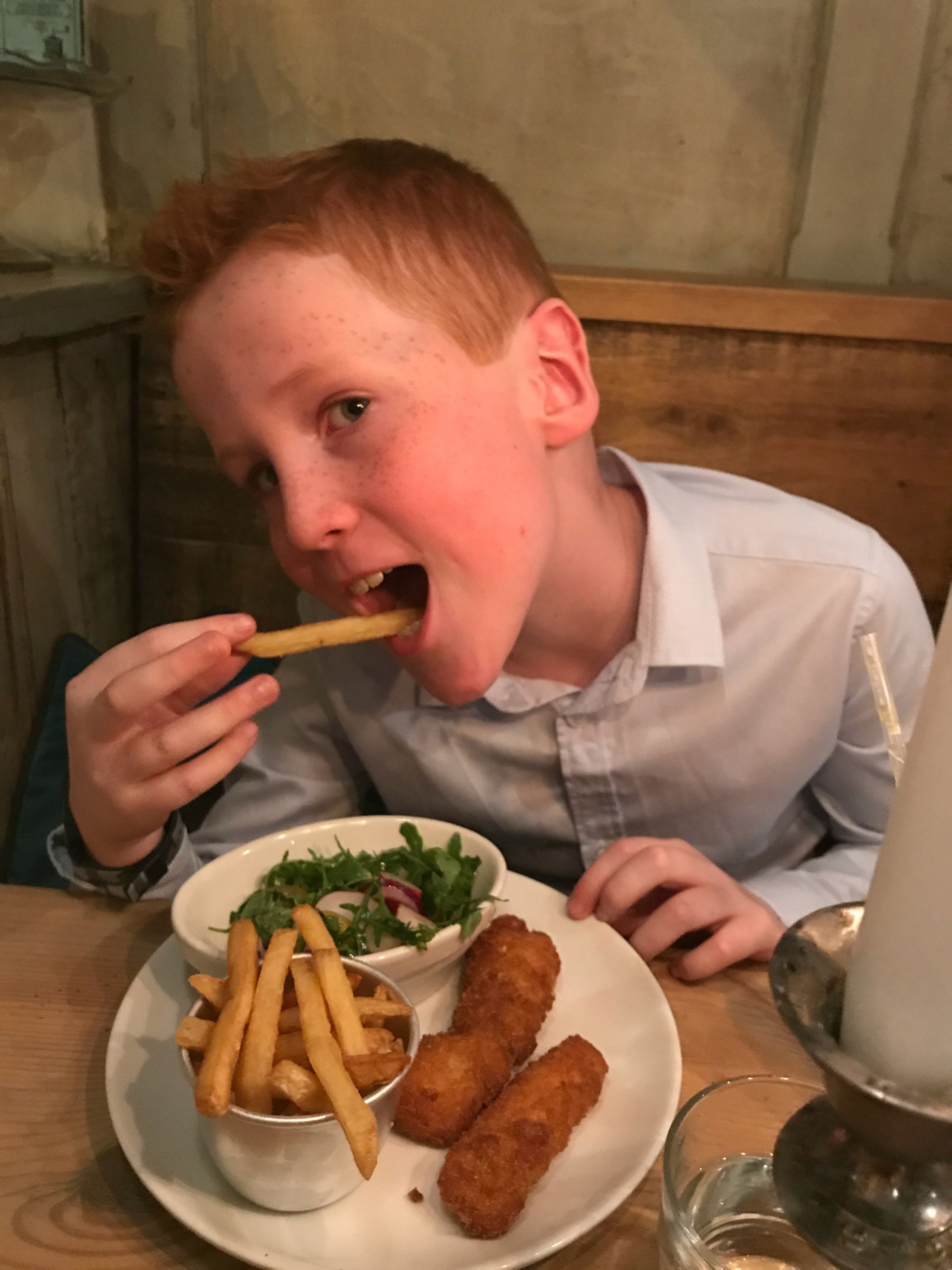 The portion size was perfectly adequate, although I’m not sure Ieuan made much headway into the salad as usual.

That just left room for dessert and coffee for the adults.  Caitlin chose a Vanilla Ice Cream Sundae and Ieuan chose the Scoop of Ice Cream with a Bill’s Wafer. This was the one course where the kids agreed the portion size could have been bigger (no surprise there!). 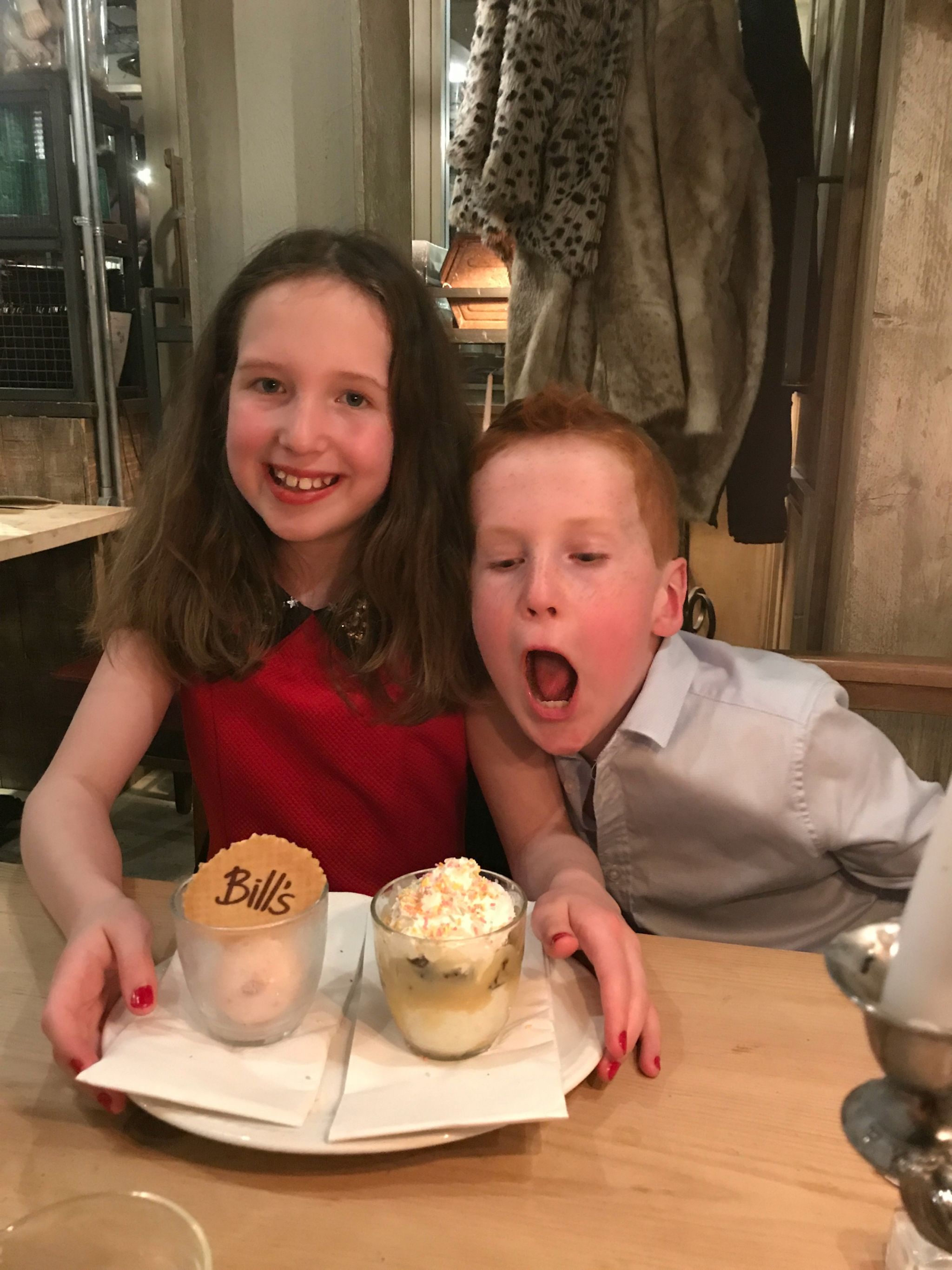 I chose the Banana & Honeycomb Cheesecake with Vanilla ice cream (£6.25) which the husband shared. The cheesecake base was nicely moist and the banana was a great complement to the ice cream. 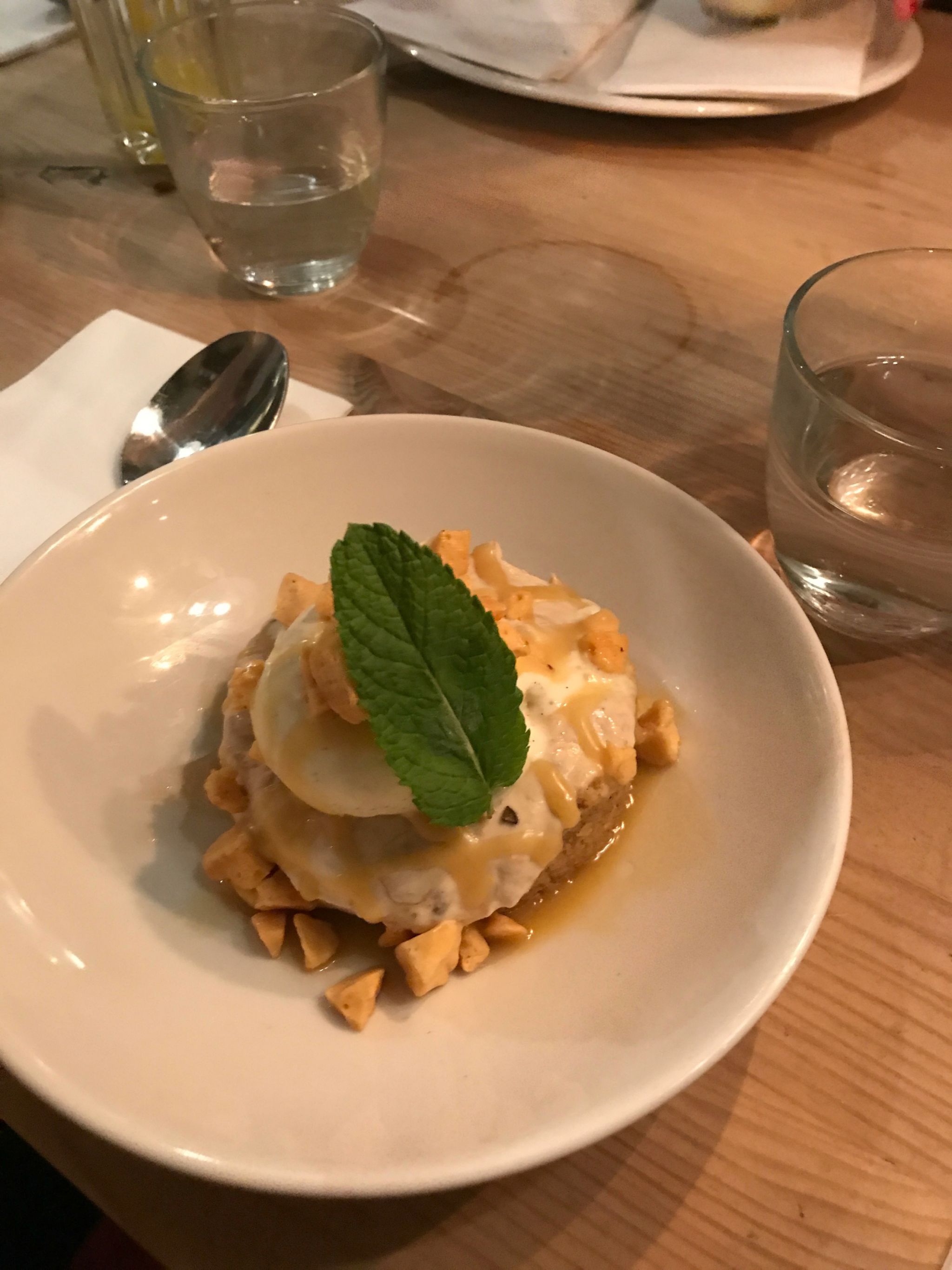 Coffee rounded off a very relaxed evening and we had only to wander across the road to the multi-storey car park which, if you’re now as unused to wearing high heels as I am, is a blessing.

We really enjoyed our meal at Bill’s Cardiff Bay restaurant.  The kids’ menu is good value for money, although we would have liked to see a wider choice of drinks and possibly a double scoop of ice cream.

So what did the kids think?

Caitlin loved ‘everything’, but especially her steak – and the ice cream sundae. She loved dressing up with her mum and the candlelight made the whole experience quite special.

Ieuan’s take on the evening was that it was “awesome” and he loved the grown-up crispy batter on the fish fingers and of course the ice cream.  “I’d move in there”, he said solemnly, “imagine being able to have all your favourite foods all the time”.  Can’t think where he already gets that…

Big thanks to the staff who were lovely and attentive, despite the restaurant being full to the rafters on a Saturday night.

I’m hoping to find a babysitter so Mat and I can return to enjoy some cocktails by candlelight!

For more information go to www.bills-website.co.uk.

*We were invited to dine as guests of Bill’s, Cardiff Bay.  Read more of our restaurant reviews here.