The no makeup selfie.  They’re everywhere at the moment and it’s about time we were more vocal in crying ‘fake’ at the number of supposed ‘makeup free’ shots clogging up our Instagram and Snapchat feed. 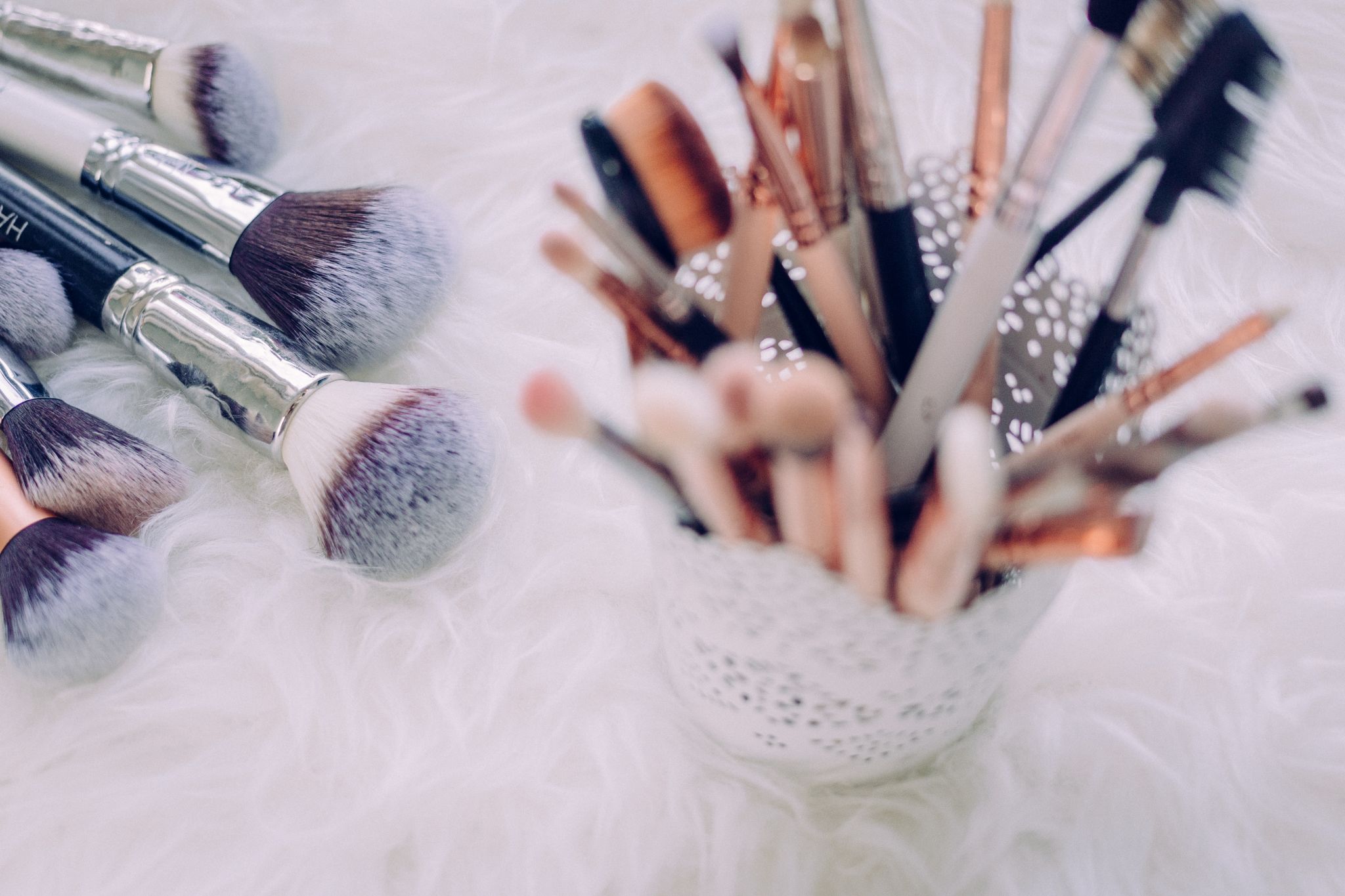 A recent study of 1,205 mums polled by parenting site ChannelMum.com and Benefit cosmetics discovered that 95 per cent of women believe stars such as Kylie Jenner and Kim Kardashian are actually wearing foundation, brow products and mascara in their no makeup selfie images on social media. There’s even a hashtag #nomakeup.

I’m at a loss to understand how anyone can believe a word any member of that desperate, fame-hungry, PR seeking clan comes out with.  I’m waiting with completely unbated breath to discover who is the surrogate for Kim’s baby and whether it is, in fact, Kylie.

But, more seriously, almost two-thirds of those polled say these false photos on Twitter and Instagram leave them feeling unhappy about their own makeup-free complexions.

And 48 per cent worry about their daughters’ self-esteem being left in ruins by the celebrities’ fake pictures.

I can certainly attest to that because, at nearly 10, Caitlin is already copying the looks she finds on social media (and yes we try to filter out as much as we can).  Her latest obsession is having the longest hair possible.  Like most 10-year-olds, however, she hasn’t yet made the link between having gorgeous glossy hair and actually brushing it.

But surely, it is up to us as mums to make sure we are honest about what makeup can and cannot do.

This report comes just days after X-Factor star Stacey Solomon was praised for sharing a genuine ‘no makeup’ shot showing how a TV make up artist transformed her face.

55 per cent of those polled agreed sharing real make up free shots like Stacey’s helps women feel better in their own bodies.

It must be a lot easier to feel confident in your own body if you have a TV make-up artist on hand to help disguise it.

Let’s be honest – we women have always used make-up to make ourselves look and feel better and there’s absolutely nothing wrong with that.

Why should there be any need to lie about it or justify our makeup habits in surveys like this which are often thinly veiled attempts to make us feel better about spending more on cosmetics?

Many of these products are, in any case, destined to lie languishing at the bottom of a drawer.  Beauty bloggers need to show us the products they have used, rather than just lightly tested!

The celebrity lifestyle these days seems to involve little more than looking a certain way and promoting some ghastly alcohol soaked, bed-hopping lifestyle which the sane among us wouldn’t want to pursue, even if it did get you the latest handbag or your own ‘fashion’ range in Very.

Other ‘revelations’ from this particular study include that women today now spend an average of FIVE times more than their own mums did on looking good.

While older generations spent just £3.50 a month on old-fashioned, heavy makeup products, modern mums splash out £17.92 a month on cosmetics to get the fashionable ‘no makeup’ look.

I’m assuming the researchers took inflation into account and, in fact, given the hefty cost of some make-up brands, you wouldn’t even get a mascara for £17.92. It’s no wonder it’s so easy to get into debt pursuing the celebrity lifestyle.

Half of young mums insisted they make the same amount of effort with their appearance or even more after having children, with 70 per cent claiming makeup is a ‘little treat’.  In this household, me putting make-up on is a ‘bloody miracle’.

Overall, the study showed 41 per cent of mums wear makeup every day while 21 per cent will don a full face of cosmetics even if they are simply staying at home.

One in eight admitted to loving makeup so much they wore it while giving birth, while more than one in five painted their faces for a post-birth delivery room selfies.

A further three in ten wore make up for bump pics while pregnant and also put on make up every day for the school run.

And half made a special effort to put on make up for their first trip out with their new baby.

But the most popular time to look glamorous include date nights with their partner, when seven in ten have a full face of makeup, alongside nights out with the girls where 60 per cent wear it.

What isn’t clear from this research, however, is the age range of the mums polled.  I would suggest that anyone influenced by Geordie Shore ‘star’ Charlotte Crosby, scarcely dressed Little Mix and the mono-browed Cara Delevigne are more likely to be at the lower end of the age spectrum.

13.51 per cent of mums want their own daughters to wait until they are 14 before wearing make-up and one in six will insist they hold on until they are 16 or over before using cosmetics.

These women are clearly strangers to a Snapchat filter because if there is anything quietly influencing our daughters’ obsession with how they look, it is surely this particular social platform.

The poll also revealed big changes in the ‘mum face’ look, as despite spending a small fortune on cosmetics, the top trend for young mums is the ‘natural look’.

More than a third of mums favour this look, followed by natural brows and dewy skin (22%).

One in ten also uses a contouring palette, made popular by Kim Kardashian.

By contrast, the top trends for their own mothers were heavy lipstick (48%) and thick foundation (31%), alongside coloured eyeshadow (28%).

This is simply a reflection of the quality of cosmetics that were available then.  Remember Cover Girl and Miners? I was particularly fond of the Kiss & Makeup Range from Miss Selfridge and wish they’d bring it back.

And I don’t know about you but my ‘mum face’ (is there really such a thing!) is closer to a bulldog chewing a wasp on school mornings than anything the Kardashian clan can create. Ain’t no make-up going to help when Caitlin can’t find her hairbrush and Ieuan has just remembered his spelling.  My school run style definitely needs work.

Apparently, modern mums hoard an average of 33 items of make-up, with 12 per cent owning a whopping 100 or more. By comparison, their own mums kept just seven basic products.

My mum had (and still has) a comb and a lipstick. My gran had a powder compact, lipstick and one of those tiny pots of Bourjois blushers in the Burgundy shade.  This didn’t so much add a rosy glow to your cheeks as make you look like you had a sudden onset of very high blood pressure. Phyllis was a devout user of Ponds Cold Cream though this wasn’t helped by the other frequent item in her handbag – Players cigarettes which you could still buy in packets of 6 in the 70’s.

The rise of Instagram and social media may mean many young mums are almost always camera ready but I’m not entirely convinced that this is making them feel better – particularly when they compare themselves to fake ‘no makeup selfies’ from celebs.

The challenges of parenting and new motherhood are such that greater support may be needed than just a new lippie.

New mums should understand that it’s OK to feel down, or lost, or unsure of who they are.  Having a baby is a massive life experience which changes everything.

You are not the same person once you become a mum.

Rather than copying celeb mums who probably have nannies on hand to help with every little chore, or make-up artists, personal trainers, hairdressers and stylists to design their ‘look’, it would be far healthier to work on mental and spiritual well-being.

Buy yourself a new mascara and lipstick if you want to, but don’t be fooled by Instagram fakery.

That won’t stop selfie ‘fakery’ of course but it may help to create a climate of slightly greater honesty.

In the meantime, if your kids love you and the way you look, then you don’t need to stuff your make-up back with hundreds of pounds of products, surely?

And the next time you spot a dubious no makeup selfie, I’d be tempted to comment  -“you look lovely but please can we see you without your makeup?”….