Channel 5’s Milkshake has just released a new DVD via Abbey Media entitled “Milkshake! Brand New Besties”.  Read on as I have 2 copies to give away. 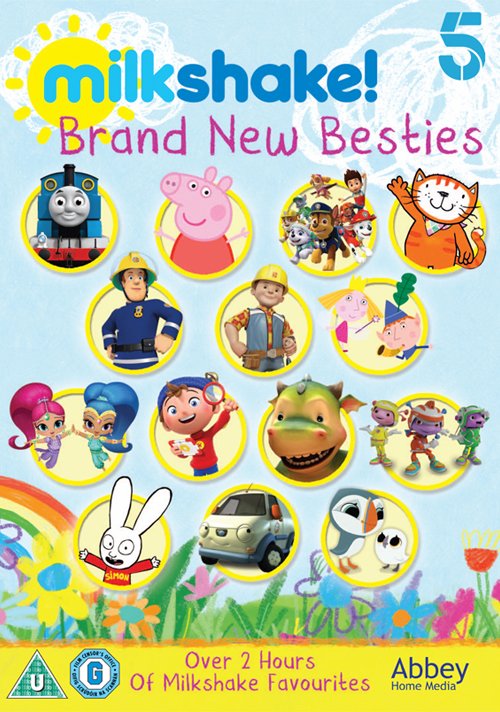 Join a host of the biggest stars in pre-school television from Channel 5’s Milkshake! as they join forces in over two hours of fabulous fun, magical mischief and awesome adventure.

Whether it’s keeping a secret, learning to compromise, solving a problem, searching for clues or planning the best sleepover ever, our heroes put their friends firmly first!

Featuring in this new collection are:-

PAW Patrol – In ‘Pups Save the Paw Patroller’, Mayor Humdinger has swiped the PAW Patroller! The pups need to get it back and save that meddling mayor too.

Digby Dragon – In ‘Disappearing Spell’, Digby’s friend Sprite comes to visit, and Fizzy casts a disappearing spell on her. When Grizel and Mungo take Spellbook it seems impossible to magic Sprite back again.

Bob The Builder – In ‘Where’s Pilchard?’, when Muck has to shoo Pilchard out of his way, she suddenly vanishes. Leo and the machines run around trying to find her before Bob realises she’s disappeared.

Peppa Pig – In ‘Playing Pretend’, when Peppa’s bike gets a flat tyre and needs fixing, Peppa and her friends have fun riding their imaginary bikes and jumping in pretend muddy puddles.

Shimmer and Shine – In ‘Flying Flour’, the girls bake magical flying cookies, but Zeta and Nazboo sneak in to steal the flying flour.

Ben and Holly’s Little Kingdom – In ‘Lucy’s Elf & Fairy Party’, Lucy celebrates her birthday with an Elf and Fairy party. Lucy’s Dad does a magic show but things get a bit out of hand when Princess Holly and her friends join in…

Simon – In ‘The Secret’, it’s Gaspard’s birthday. Simon has found out where Mummy has hidden his brother’s present. But Simon has sworn he’ll keep it a secret!

Poppy Cat – In ‘Underwater Picnic’, when Zuzu and Alma both arrive with plans for the group, Poppy teaches them the art of compromise. They set off in the submarine for Seaweed Sea to look for the speedy turtle and have an underwater picnic.

Floogals – In ‘Project Caterpillar’, Boomer has become very fond of the 3 stripey caterpillars the kids are keeping in the shed. When one vanishes the Floogals stake out the container they are in to see if they can solve the mystery.

Olly the Little White Van – In ‘Bad Luck Olly’, Olly is going through a run of terrible luck. The more he tries to help people the more things go wrong. Help comes from the most unlikely place as Bazza helps him relax and do what comes naturally….Helping!

Puffin Rock – In ‘Mossy Impossible’, Oona is in danger. She’s tangled up in fishing twine near Seagull Cliff and the seagulls will be back soon! Mossy and Bernie try to free her, but they need help from Mama and Papa Puffin.

Thomas & Friends – In ‘Toby’s New Friend’, Philip spots Toby and assumes that he is a diesel boxcab just like him. Convinced that they will become best friends, Philip rushes up to introduce himself, but Toby finds him rather overwhelming.

To enter the giveaway, simply enter via the Rafflecopter in the usual way.  Terms and conditions apply which can be viewed on my giveaways page.  UK entrants only and the giveaway ends at 11:59 pm on Sunday 26th November.