It’s Singles Awareness Day although, if you are single, you may be painfully aware of that fact. You may be wondering if there are reasons why you’re still single.

In the bad old days, society had a bit of a problem with singletons.  Women were ‘spinsters’ or ‘old maids’ and, later, expected to emulate Bridget Jones.  There’s never been that problem with ‘bachelor’, has there? 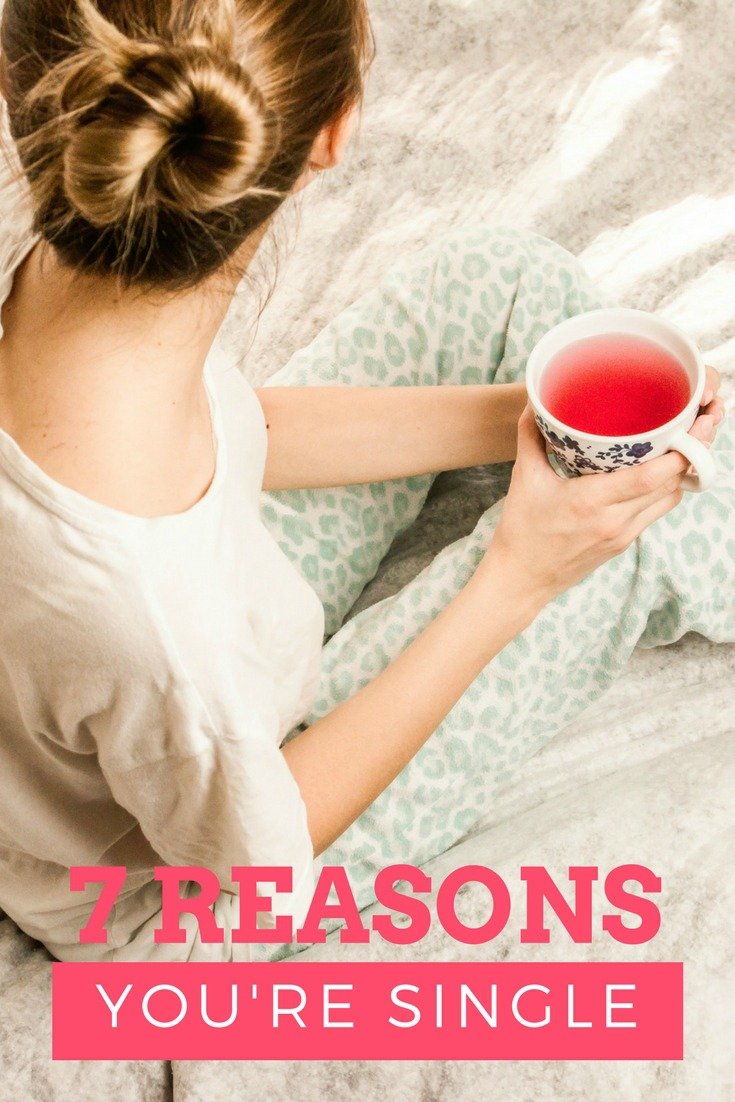 Still, now that Valentine’s Day is out of the way and the nightmare of having to answer the question “how many cards did you get then” is over, you might be feeling a little deflated and less than satisfied with your single status.

I know it’s 2018 and that you don’t have to be in a relationship but there is absolutely no shame in admitting that you do want to find a partner.

In my weekly problem page I come across all kinds of people who are desperate to find love but who seem totally oblivious to the reasons why they are still single.

Here are 7 possible reasons why you are spending every night with a meal for one and the cat.

You have totally unrealistic expectations

We know that, by and large, we tend to be attracted to partners with a similar level of attractiveness to our own.  You may well be waiting for James Bond to drop through your window but unless you look like a Bond girl, the chances are slim.  The most handsome Prince Charming usually ends up with a Disney Princess, doesn’t he and, unless you’re 12, I wouldn’t suggest using Disney’s idea of romance as a benchmark for real life.

You make absolutely no effort

Dating is a bit like marketing.  You can have the best product in the world but if nobody knows it exists, it ain’t going to sell.

If you stay home night after night then you are unlikely to meet someone.  If you won’t get involved with work social activities or take up a hobby where you stand a chance of making new friend (male or female), then you are reducing your chances dramatically.

Widening your friendship circle in general will help because you never know who you may be introduced to.

You have a ‘checklist’

Ah the checklist.  Some of the checklists I have heard about make BREXIT negotiations look like a walk in the park.

Not only that, you are going to make people wonder whether what you have to offer matches up.

I often joke that dating is a bit like auditioning for a part in a play.  Will you or they get the starring role?  It’s great trick if you’re on a date and obsessing about whether they like you.

Just pretend you are the director and they are the auditionee.  This trick takes the focus off you and your nerves and puts it on to them – and whether they are treating you well and potentially worth investing your time and romantic feelings on.

This is a world away from what many singletons do and that is treating a date like a job interview.

That is truly off-putting.

Find someone you like, have something in common with, find reasonably attractive and who makes you laugh.  That’s a better starting point than fluency in Mandarin and the ability to cook up the perfect Eggs Benedict.

A very popular question I get is “why haven’t they texted me back?”, usually after just a few hours! Or I texted 12 times yesterday with 3 heart emoticons every time and they never responded – why?

Probably because they think you’re a bit of a stalker.

You can’t conduct a relationship by text.  To get to know someone you have to talk to them face to face.

If you don’t get a response to your text, it may just mean that the object of your affections is working, is busy, is caring for their sick mother or, in other words, has a life which doesn’t necessarily involve you.

I also get asked “how soon should I text after a date”?  A quick text saying you really enjoyed yourself and would like to meet soon is in order but then give the other person a chance to respond in their own time.  I would say a week is probably long enough to wait.

Oh the questions I am asked about the whole blocking / unblocking thing.  He / she liked my Instagram photo from a week ago – what does it mean?  I am following them but they won’t follow me back.

This follows on from my point about phones.  You can’t conduct a relationship via social media. Liking a photo means nothing.  Following means very little too.

And if you are the type of person who blocks and unblock when something upsets you then you would be better off addressing the problem with your loved one and talking about it.

You don’t actually want to be in a relationship

You don’t have to be in a relationship if you don’t want to.  The world will not end.  For lots of us periods of solitude and aloneness are refreshing – particularly if you have just gone through a bad breakup.

The biggest fear is probably how to justify it to others – you really don’t you know – but if you are asked why you aren’t in a relationship just smile and say “you’re too busy building a business / growing orchids / planning your trip to Asia” and change the subject.

There’s something other people aren’t telling you

Now this is everyone’s secret fear – that there is something terrible about us that is putting others off.

Sometimes, just sometimes, there is something that is a little off-putting.  Your best strategy is to ask a close friend or family member if you have picked up any less than desirable habits.

It’s unlikely to be anything to do with your personal appearance as long as you are taking care with your personal hygiene and grooming. Again, a frank appraisal by a close friend will help. Ask them if there are any other reasons why you’re still single that they can think of.

If you want to be in a relationship you have to get out there, hard though it is. There are plenty of dating sites online you could try or tell a trusted friend you are looking for someone and see if there is anyone they could introduce you to.

One last point.  There is no age at which it is ‘too late’.  There is no hurry. The only factor that you may want to consider if whether you want children which, unless you are planning to freeze your eggs, should focus your mind a little.  We know that female fertility starts to drop after 35.

But, even so, you cannot force a ‘perfect relationship’.  The trick is to be happy with yourself so that your confidence and self esteem make you attractive to others.

When you’re happy with your own company, then others will want to spend time with you. If you must write a checklist, you’d be better off listing all the things that bring you joy and then going out and actively pursuing them.

I’ll bet you’ll be loved up in no time.