In problem page edition 7 of 2018 from your online relationship coach – when your boyfriend of 8 years still treats you like his ex, when your sister screams at you in airports and when the woman he left you for is coming to your daughter’s wedding and you don’t trust her to dress appropriately. 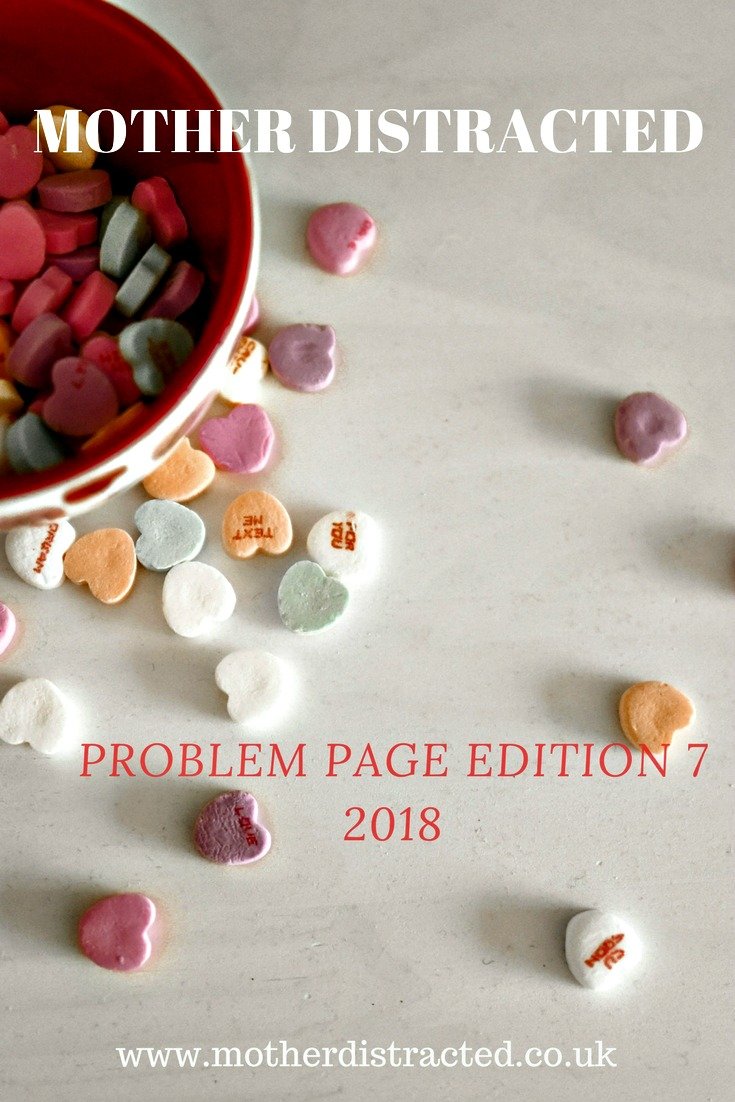 Here are the questions for problem page edition 7.

Q:  A guy asked me out today and I told him “no”, but I wanted him to try harder. Why didn’t he try again?

A: Why did you want him to try harder for heaven’s sake? It’s hard enough for guys to ask girls out as it is without having their feelings hurt.

He may have had previous experience of partners who play with his feelings and decided not to waste any more time.

He may ask you again but if he does I would grab your chance because there are plenty of other opportunities out there.

I’d also remember that guys are humans with feelings. They shouldn’t have to pay the right amount of homage before they are rewarded with your attention.

Most people will get bored with those sorts of games very, very quickly.

Q: My narcissistic ex dumped me after lying and cheating. Now, he tells me he hates me for reporting him online and told me never to text again. Shouldn’t he feel nothing since he dumped me?

A: Very often we call people narcissists when really they are just normal people who have treated us badly.

It sounds from your question as if you were hoping reporting him would make him see the error of his ways and come back with his tail between his legs.

Unfortunately it has had completely the opposite effect.

I’m guessing you also told him you had reported him, otherwise it is pretty unusual to be told who reported you.

Rather than waste any more time second guessing what he should, or not feel, it’s time to move on.

I think you’ve made your point.

Q: How do I get my boyfriend of 8 years to not treat me like I would respond to actions that he does as if I was his ex?

A: Since you have been together for 8 years, I think the patterns of relating between you are practically set in stone.

Why have you waited so long to address this? And why is he, presumably, still comparing you to someone he left 8 long years ago.

There is something a little strange here, don’t you think?

I would forget the ghost of the ex because they have nothing to do with your current situation.

If he is treating you in a way you don’t like then you must tell him.

If he is reacting to you in a manner which suggests he’s treating you like his ex, I would say, “come now, that was years ago and is in the past. Let’s deal with where we are in the present. I am me not her”.

If he can’t, or won’t move forward I would suggest you think about couples counselling or even individual counselling for him if he has issues such as depression he is grappling with.

But 8 years is long enough to live with the ghost of his ex. He really needs to get a grip and move on.

And if you have had enough of it, so might you.

Besides you are being incredibly unfair to your current girl if you don’t love her.

I also wonder whether your ex is still in love with you or whether she is just jealous. Will she rush to your side again when she sees there is no longer any competition?

There is only one way to sort this out. Leave your current girlfriend and ask your ex back out.

Just make sure you are clear where your affections really lie and don’t continue messing two women around.

Q:  What is appropriate for my ex-husband’s wife to wear to my daughter’s wedding? She is not apart of the bridal party and has no relationship with my daughter.

A: What are you suggesting she should turn up in? It is a wedding upon which, I imagine, a lot of money has been spent. Guests should look smart, shouldn’t they?

Is your ex-husband your daughter’s father? Is this lady effectively a step-mum?

I can tell by the tone of your question that you are very bitter about the situation but it is your daughter’s day and I can’t see why there should be a special dress code for your ex husband’s wife.

As long as she doesn’t turn up in a full length ballgown wearing a tiara or committing the huge faux pas of wearing white, I can’t see what the problem is.

Q: Should I forgive my sister for screaming at me and humiliating me in the airport? It’s not the first time she’s done it in public. I’ve noticed this pattern.

A: You need to address the behaviour because, if it’s a pattern, forgiving it is basically sending her the message that it’s OK for her to behave like this.

I would point out, incidentally, that while she is screaming at you, she is making herself look a prize idiot in the eyes of those watching.

Only you know what the source of these arguments is – and whether it is reserved for the airport – but you need to tell her that grown ups deal with their disagreements behind closed doors in a mature way.

Behaving like a petulant toddler is going to solve nothing.

Take a deep breath and start standing up for yourself.

Q: Why did my ex dump me because of me starting drama? How can I stop the drama in order to get him back?

A: It’s got nothing to do with the drama, has it. It’s to do with whatever the drama was ABOUT.

If you are a bit of a drama queen and fly off the handle when you’re in a mood then, yes, that kind of behaviour is going to irritate a lot of people who will wonder why you can’t behave like an adult.

If the drama was you confronting him about treating you badly, cheating, flirting, disrespecting you, being unkind, then you have every right to confront him.

It’s very easy for some guys to cry ‘drama’ when they have just heard something they don’t want to hear and don’t want to deal with it. It hints at someone who is sexist, misogynist and immature.

This man dumped you. If it was for something you know at heart he was at fault for, find someone else.

If it was you acting like a teenager, then all you can do is apologise and ask for another chance.

My suspicion here is that he just isn’t worth the effort.

I hope you enjoyed Problem Page Edition 7. You can find more dating advice from your online relationship coach in these posts:-