We were recently invited to sample the Sunday lunch menu at Oddsocks Bar & Kitchen at Jurys Inn Cardiff.  Hopeful of the prospect of finding a traditional Sunday lunch actually in the city centre, we extracted Ieuan from the Xbox and set off.

The first thing to note is, that Jurys Inn isn’t where I thought it was.  No longer situated outside the Motorpoint Arena it is now in what was the Park Hotel in Park Place – a leafy precinct along which you’ll find the New Theatre and the previous home of my erstwhile employer, Morgan Cole Solicitors, now Blake Morgan. 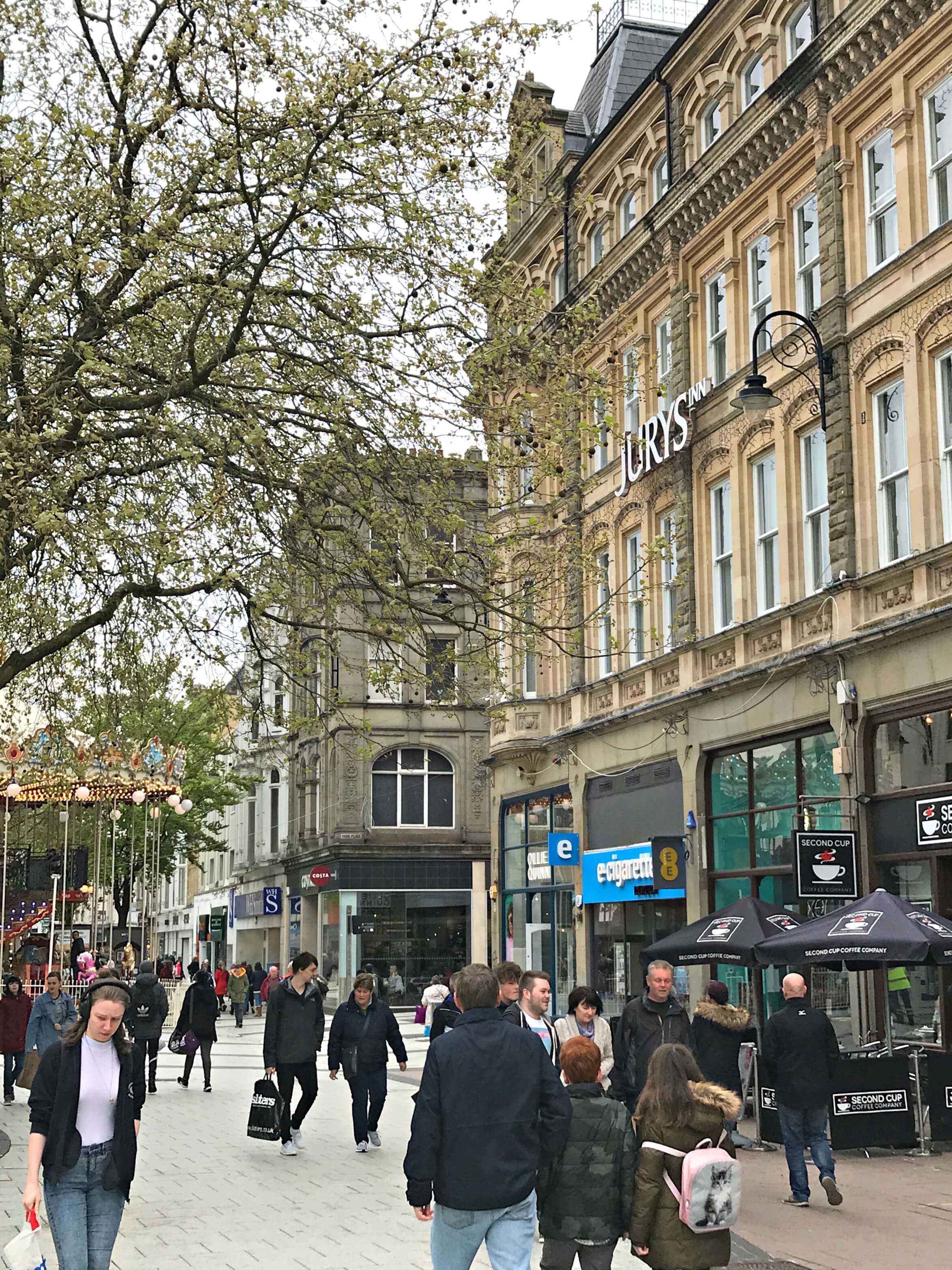 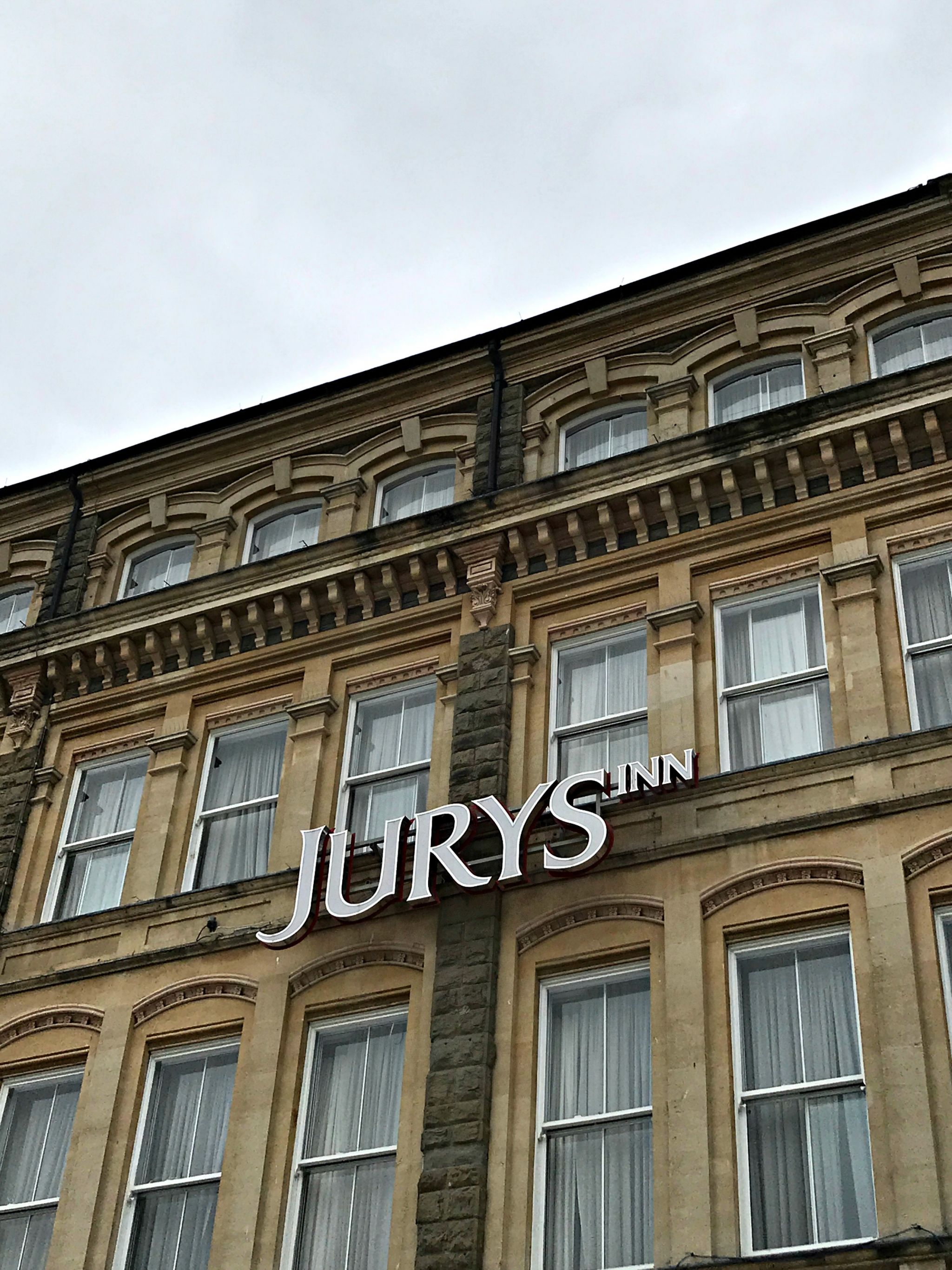 This is, it has to be said, a much more pleasant location right in the heart of the city, a brief walk from Queen Street Railway Station and a slightly longer stroll to Cardiff Central through the shopping malls – never a hardship.  There are also plenty of multistorey car parks nearby, including Greyfriars Road which is literally a stone’s throw away from the hotel. 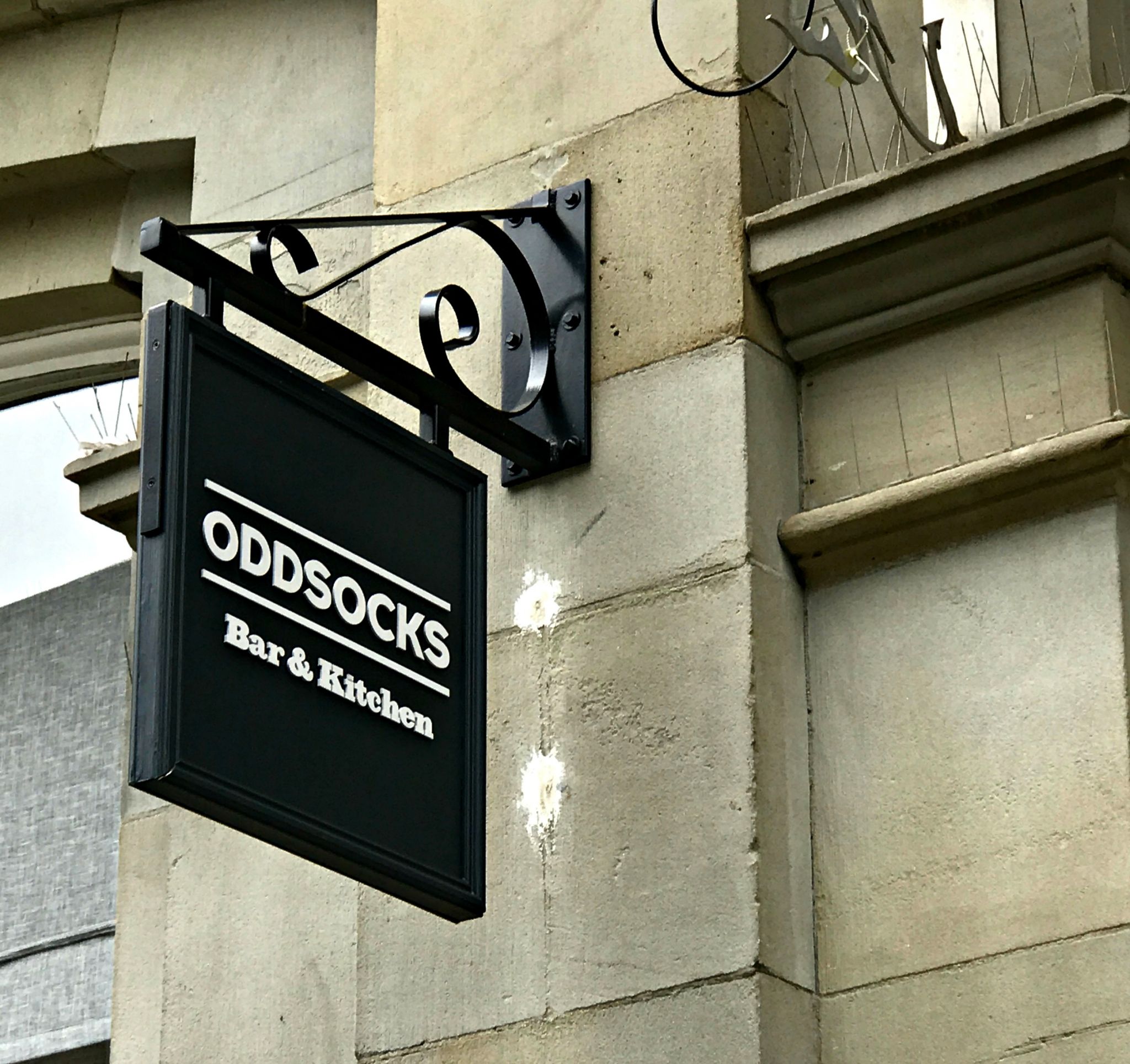 Oddsocks Bar & Kitchen appears to be a new venture and there are three – Liverpool, Manchester, Brighton and, happily Cardiff.  Open to non-residents, they claim to cater for all tastes and appetites with plenty of “hearty British fare” such as traditional pork & leek sausages & mash or healthier options such as their Mezze Salad with spinach, feta, olives and roasted red peppers.

We awaited the Sunday lunch menu with interest! 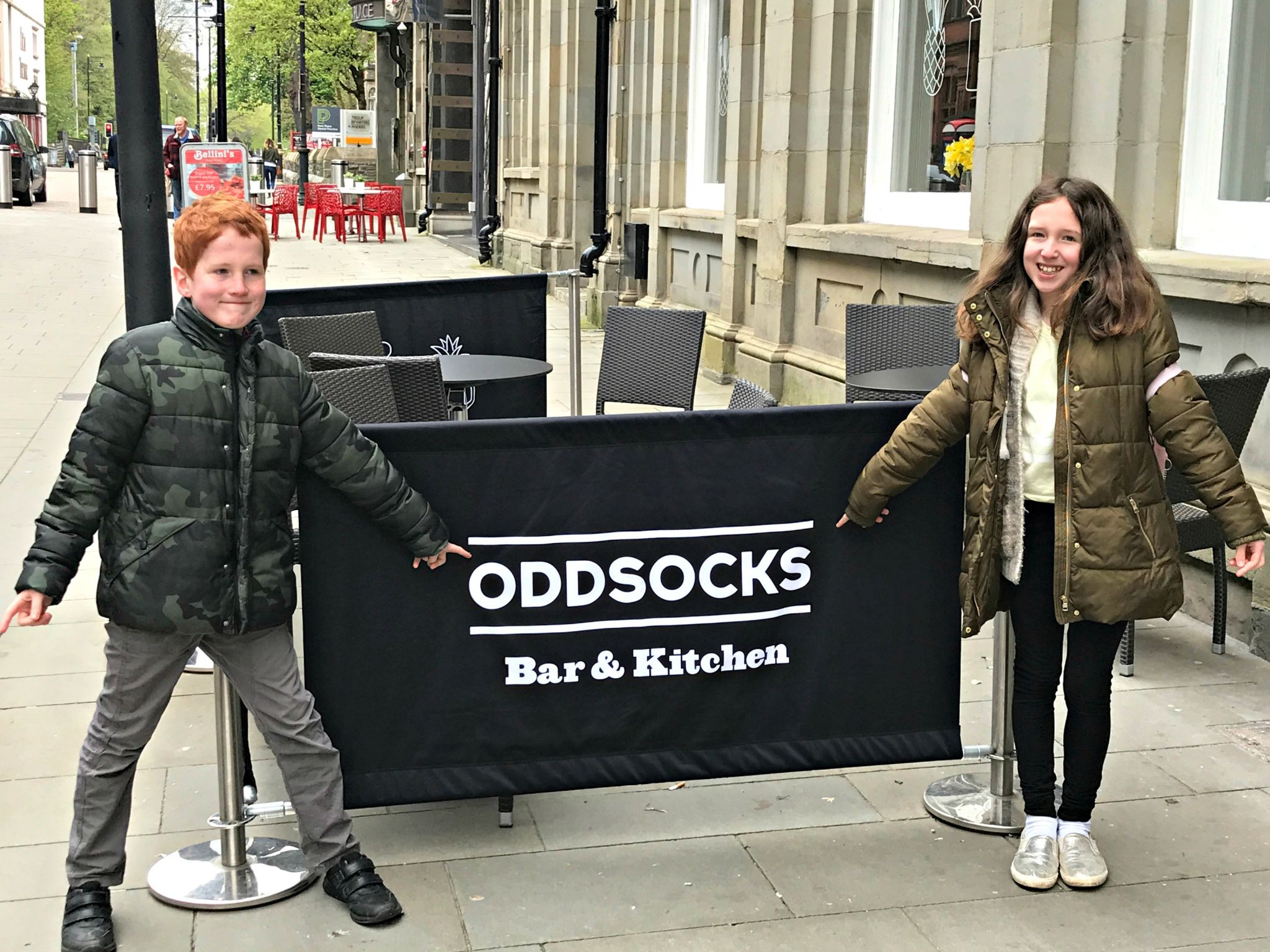 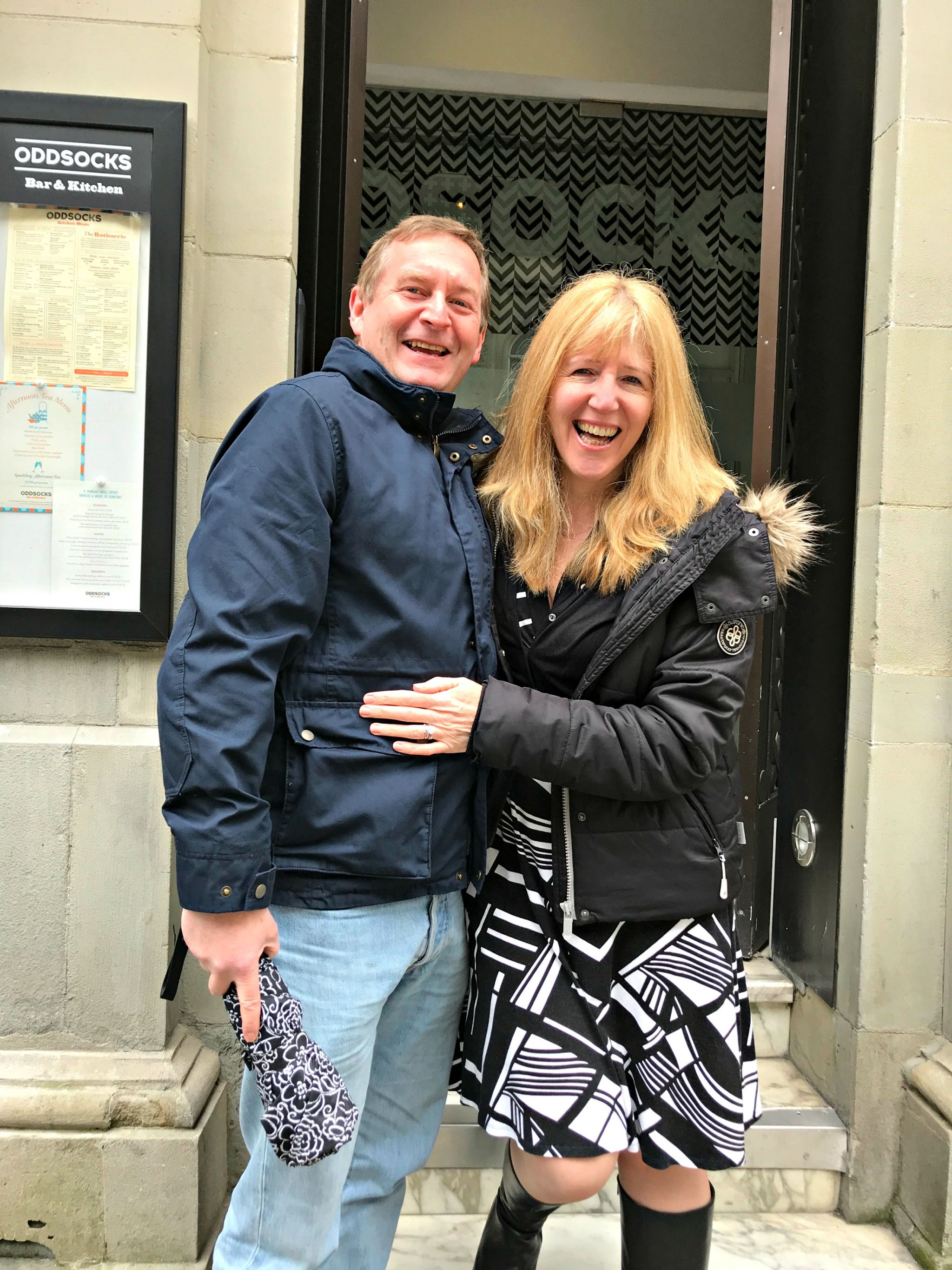 The place has a separate entrance right next to the main hotel entrance and is bright, airy and comfortable with a mixture of plush seating and rather hard benches for those of us whose rears are made of sterner stuff. 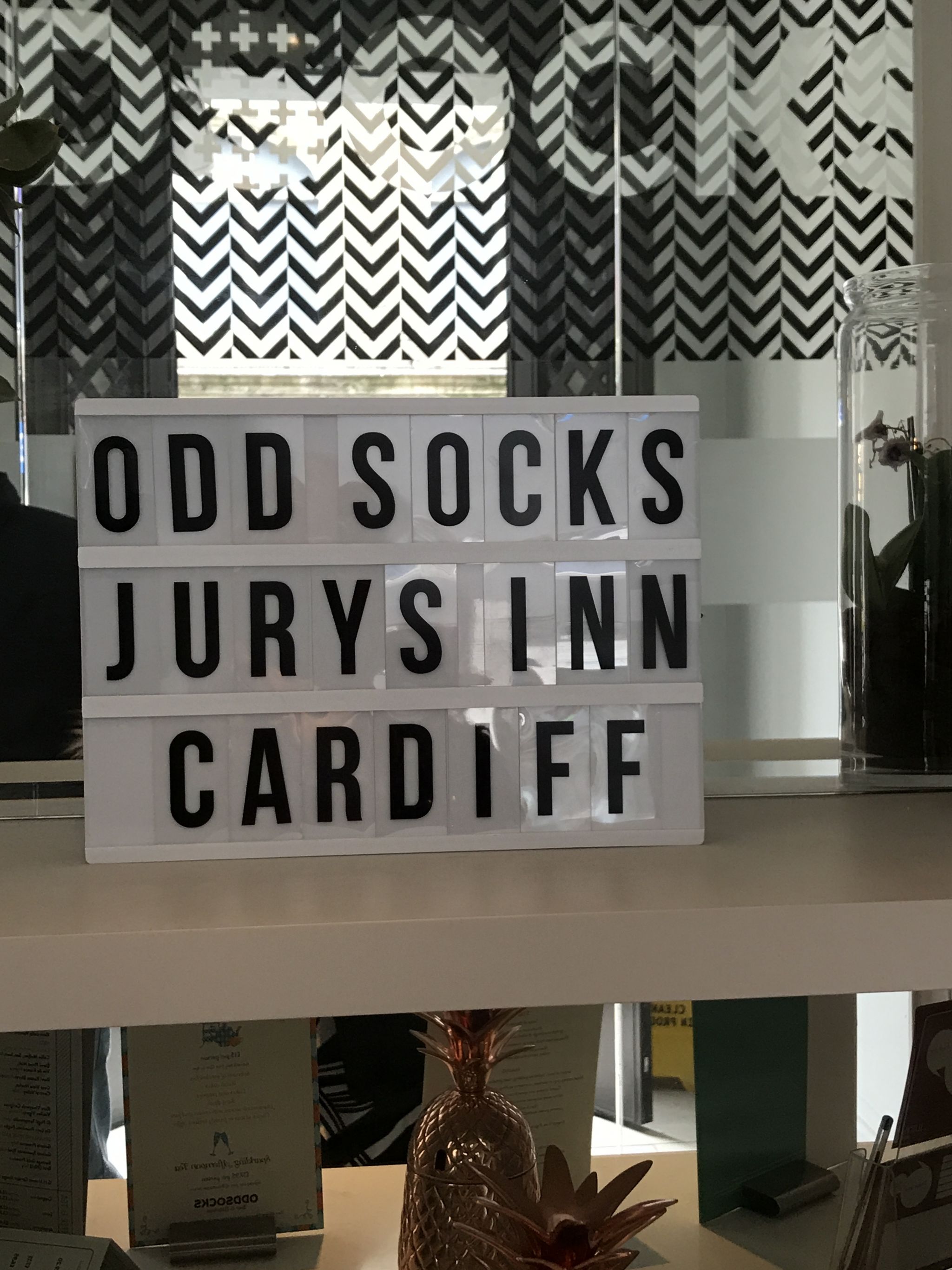 The decor is less quirky than I was expecting  (there are no socks and nothing particularly mismatching either) but Caitlin and Ieuan loved the name and promised to behave with the necessary oddness.  No change there then. 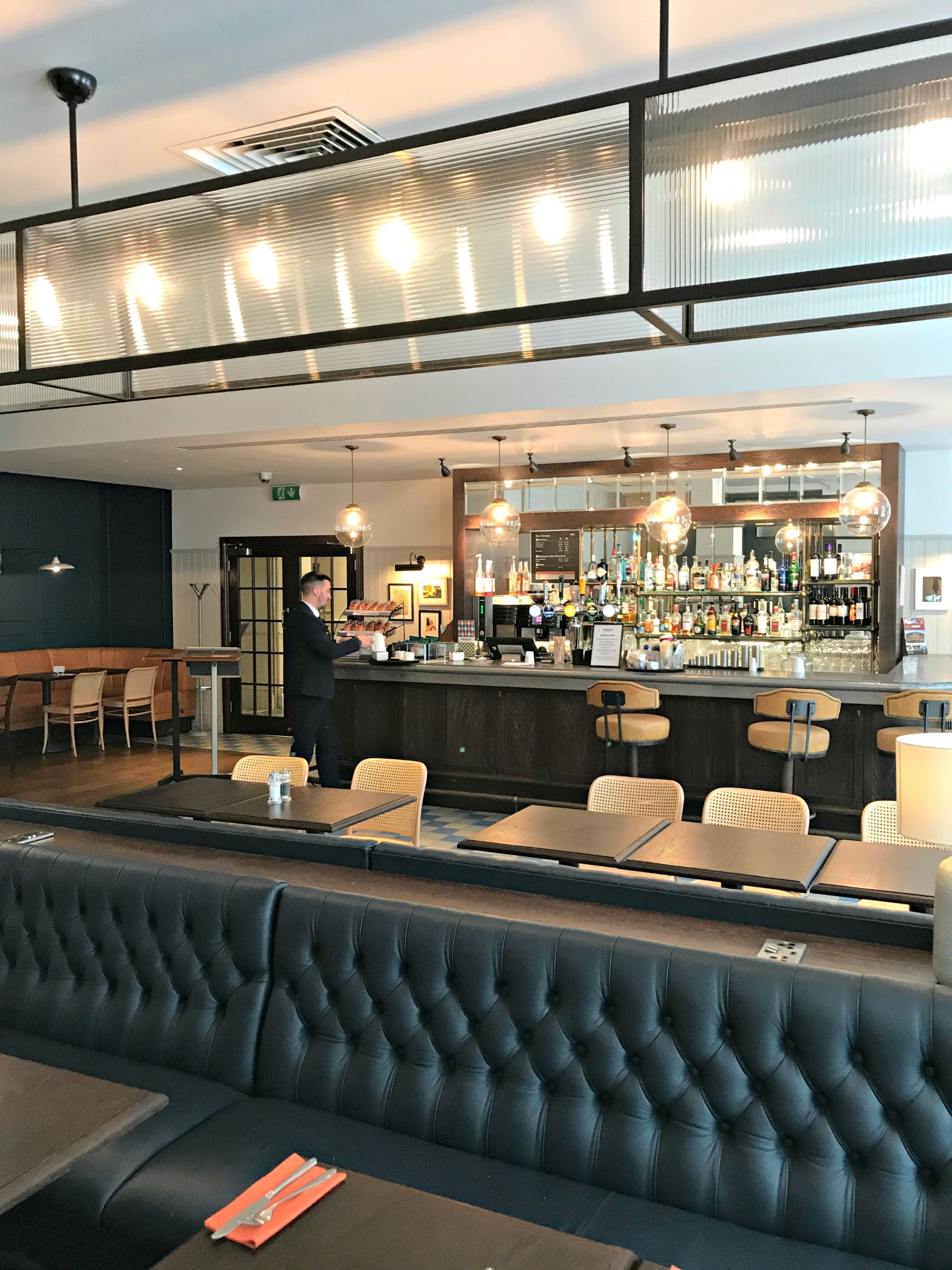 Actually, Oddsocks Bar & Kitchen was a bit of a revelation.  Living nearby in Dinas Powys, Sunday is often our day to come ‘into town’ but a decent Sunday lunch has generally eluded us and we have found ourselves lunching in one of the many chains.  This means missing out on a ‘traditional’ Sunday lunch. 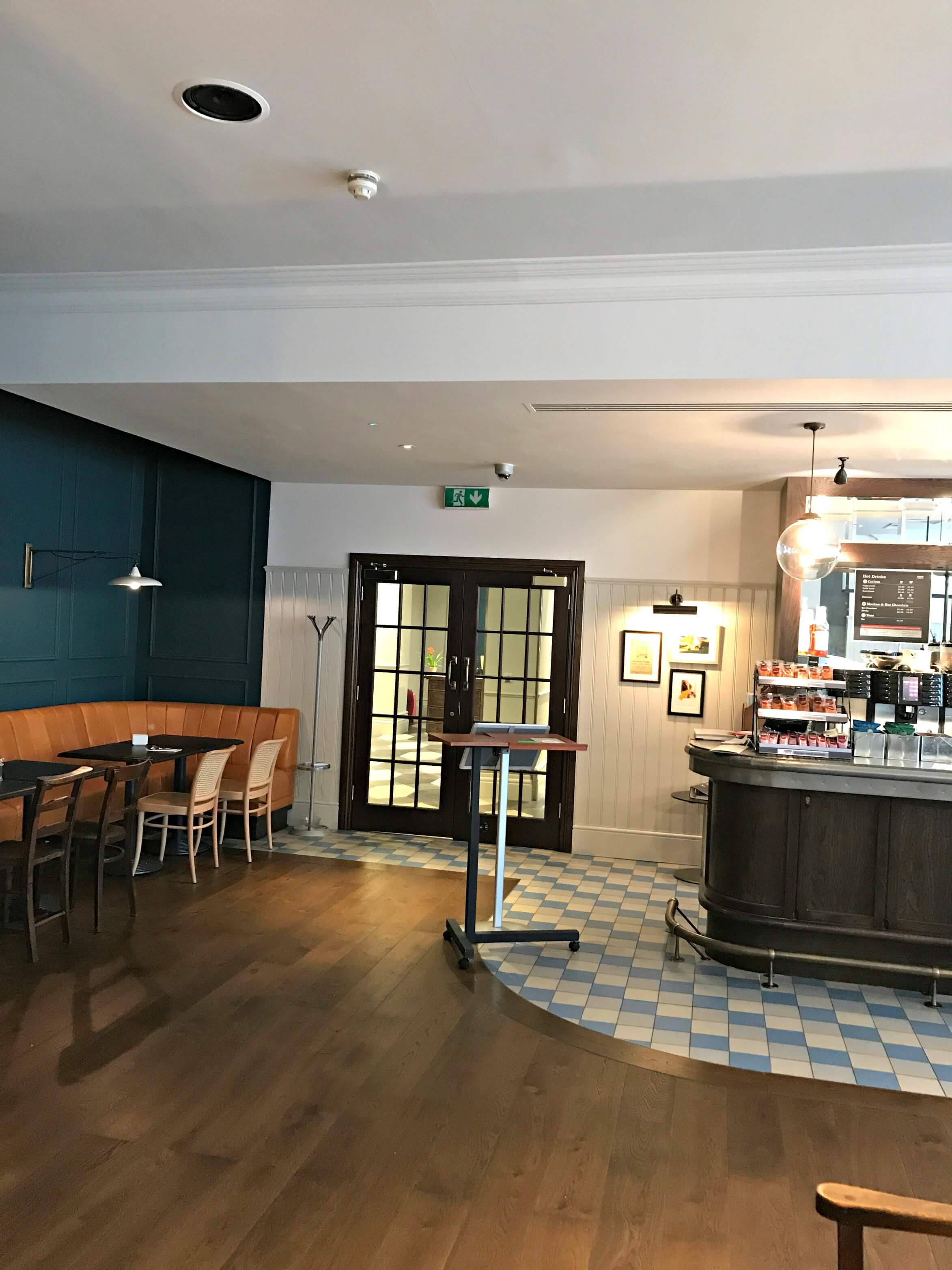 Of course, there are many quirky, exciting eateries in and around Cardiff but when you have two sulky tweens you just want good food, fast and with minimal fuss. 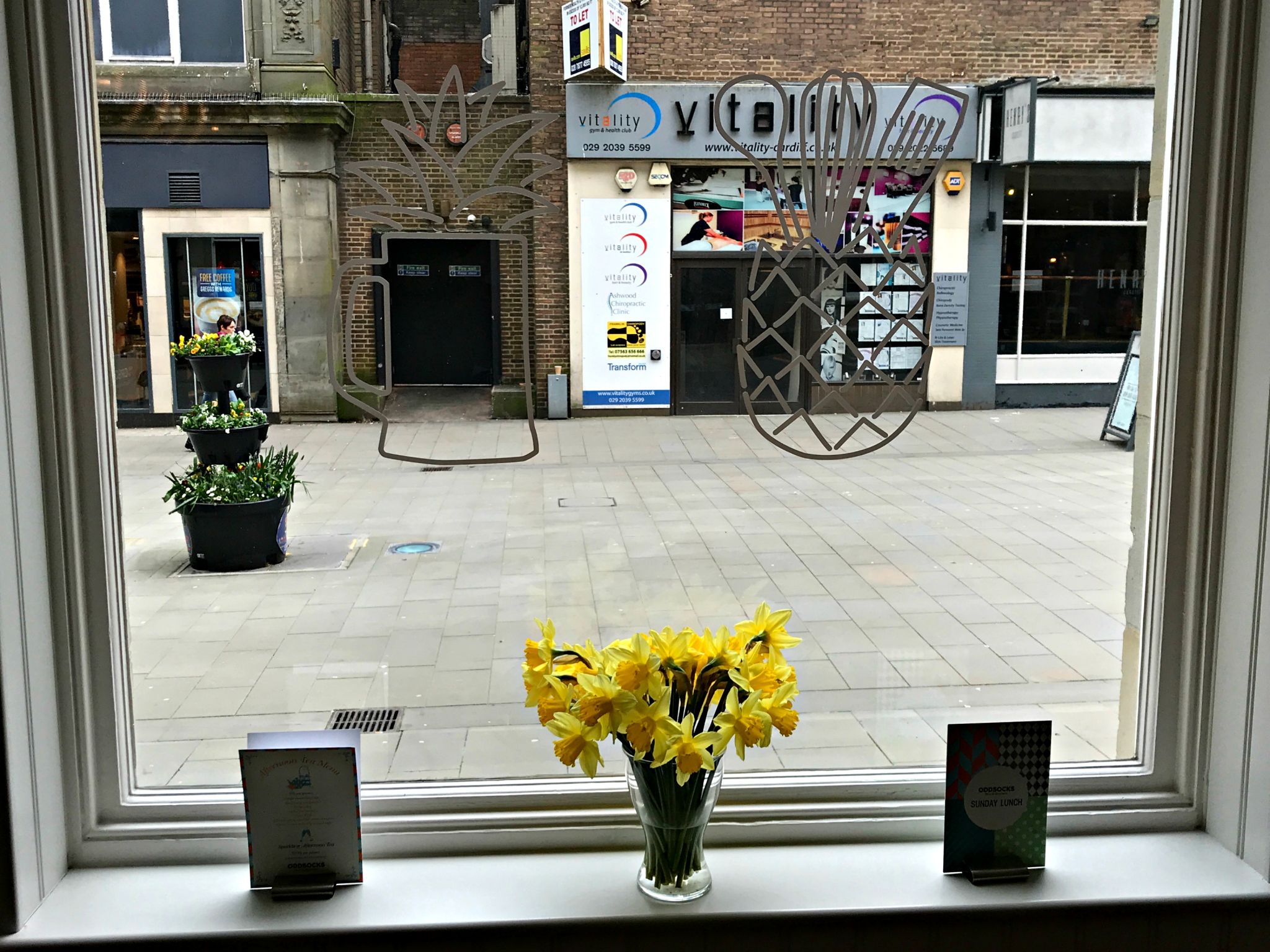 And, as an aside – for those of you who hate loud music in restaurants (my fellow tinnitus sufferers for example), the music was just at the right level to add atmosphere but not be intrusive. 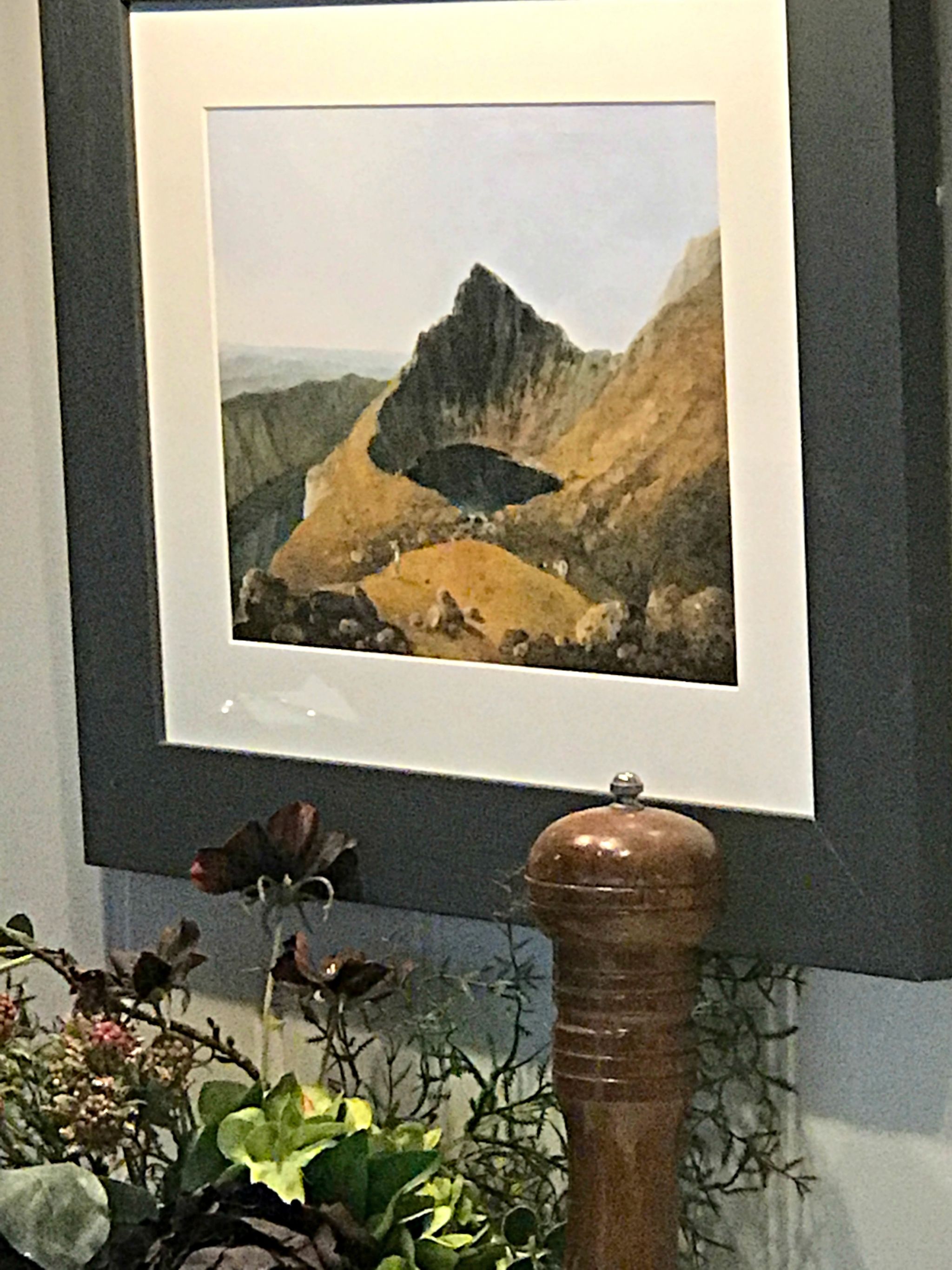 The Sunday lunch menu is reasonably priced and offers a select, but creative selection of dishes for starters, mains and desserts. 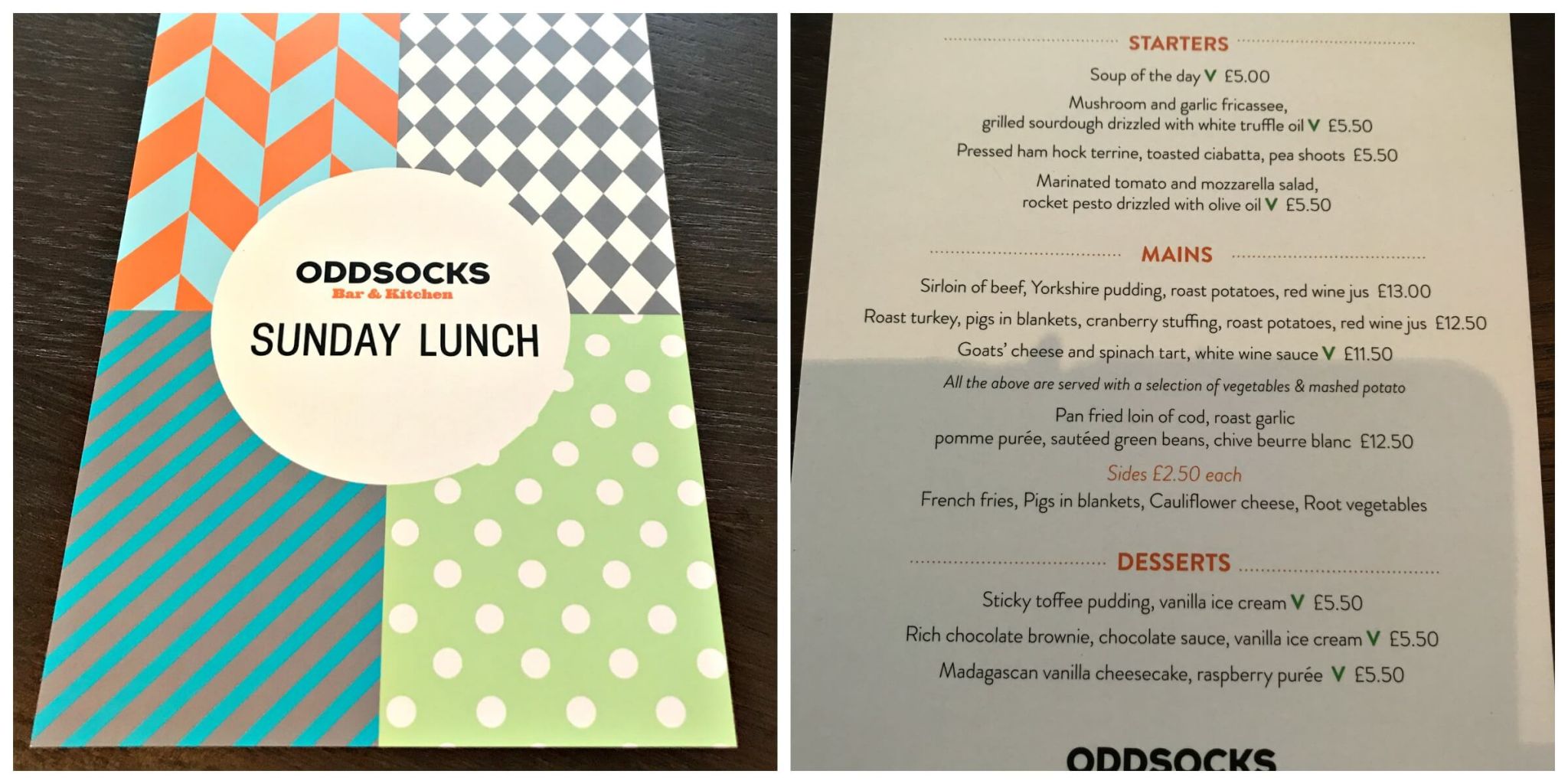 The Little Socks Kids’ Menu offers a great range of children’s favourites with a decent inclusion of fruit and veg. 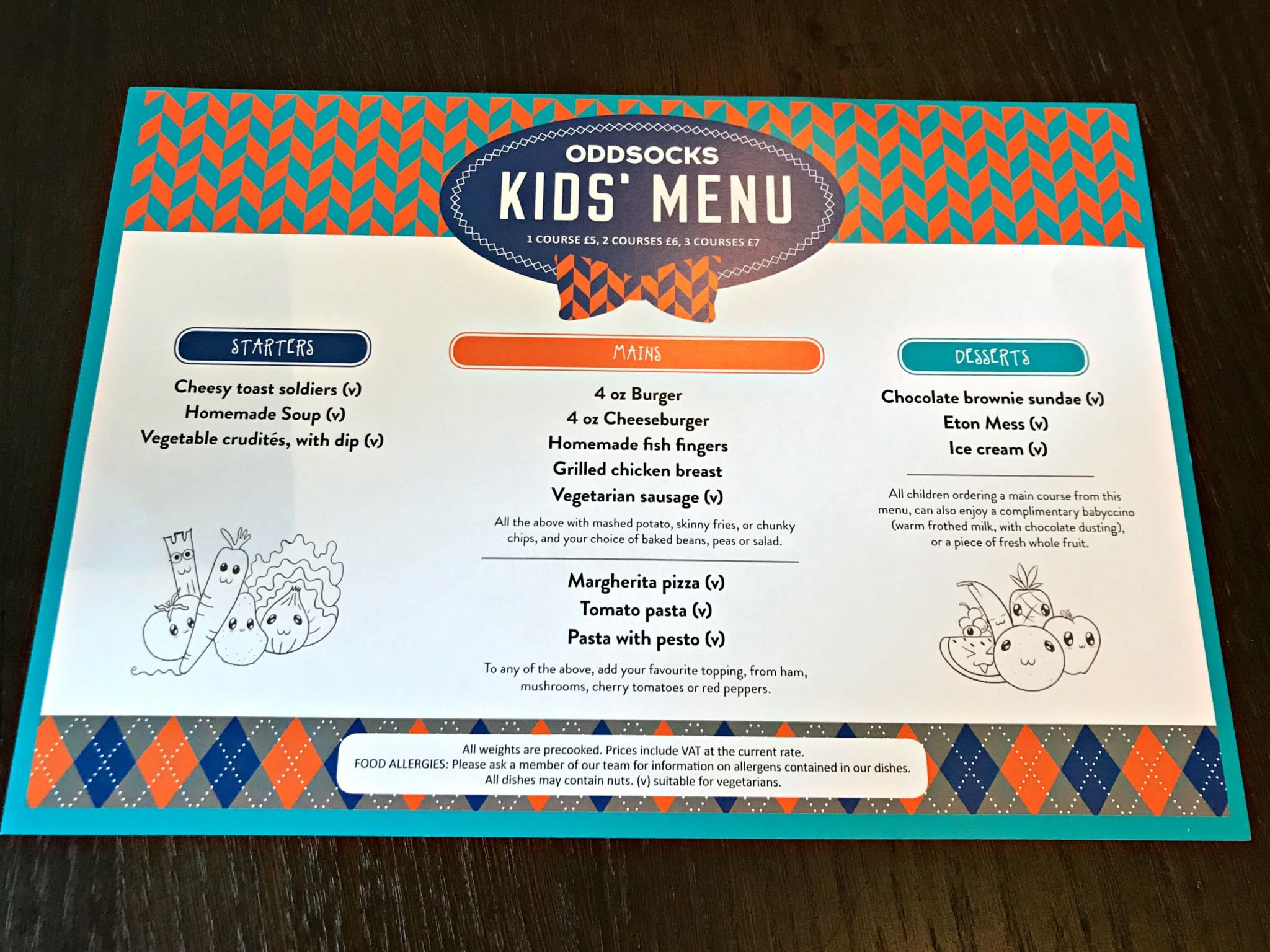 The children choose Cheesy Toast Soldiers for their starter and these came piping hot in almost main meal size.  Ieuan,  who would never deign to eat ‘cheese on toast’ at home, was apparently fooled by the name change and wolfed his down. 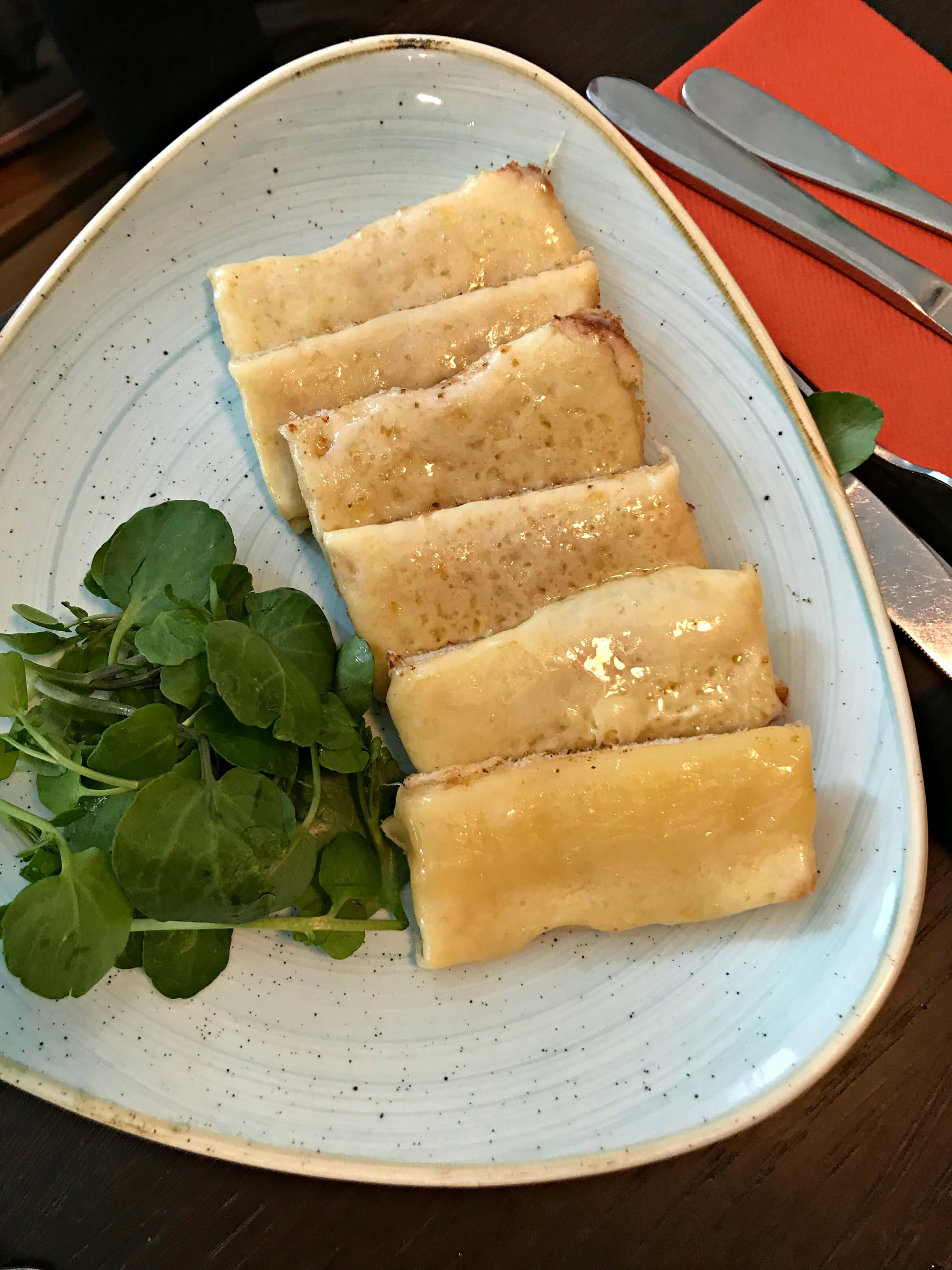 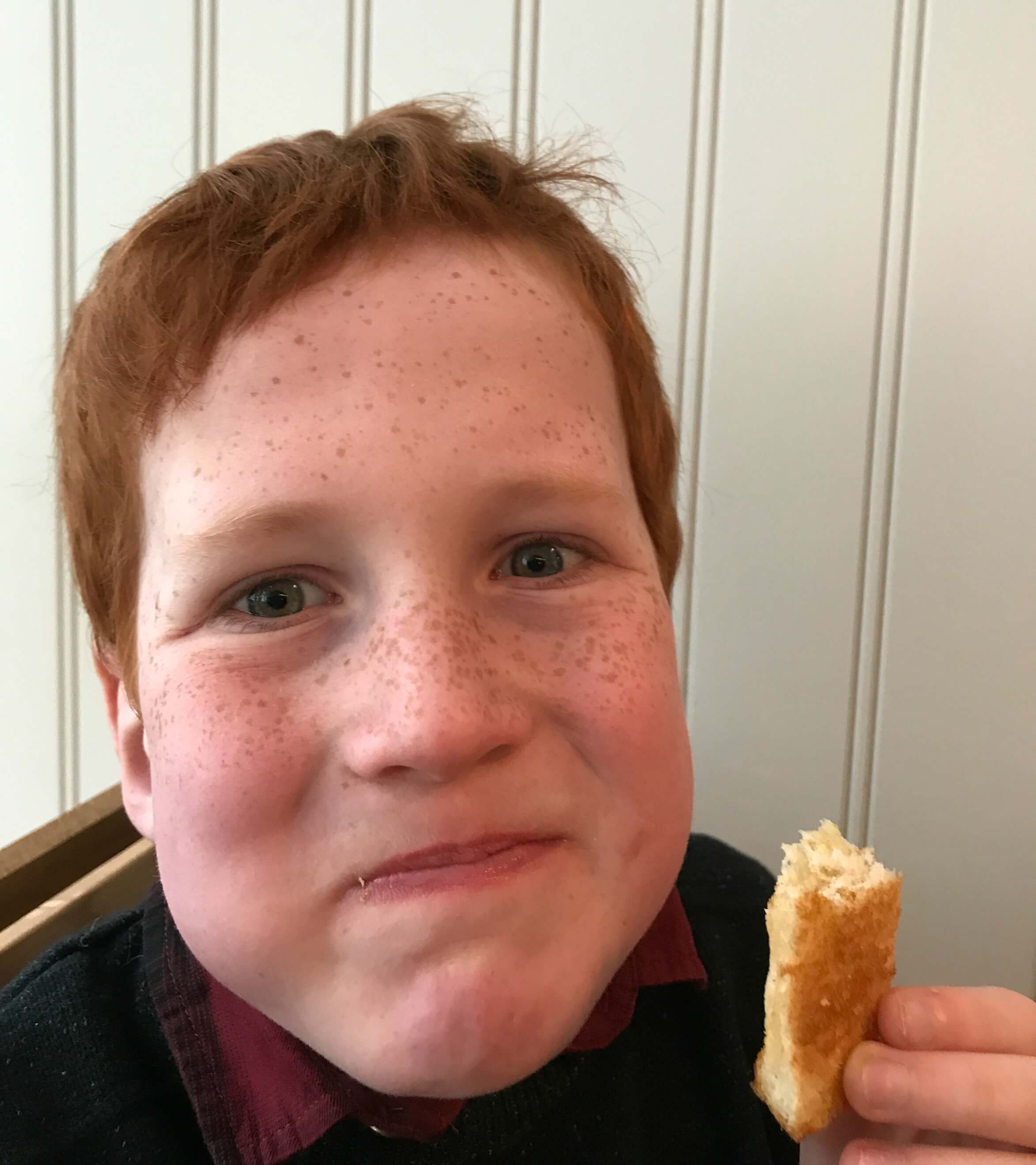 The change was midday ‘hangry’ to ‘more agreeable boy’ was instant.  I didn’t have too much luck getting either Caitlin or Ieuan to try the free and mustardy watercress garnish. 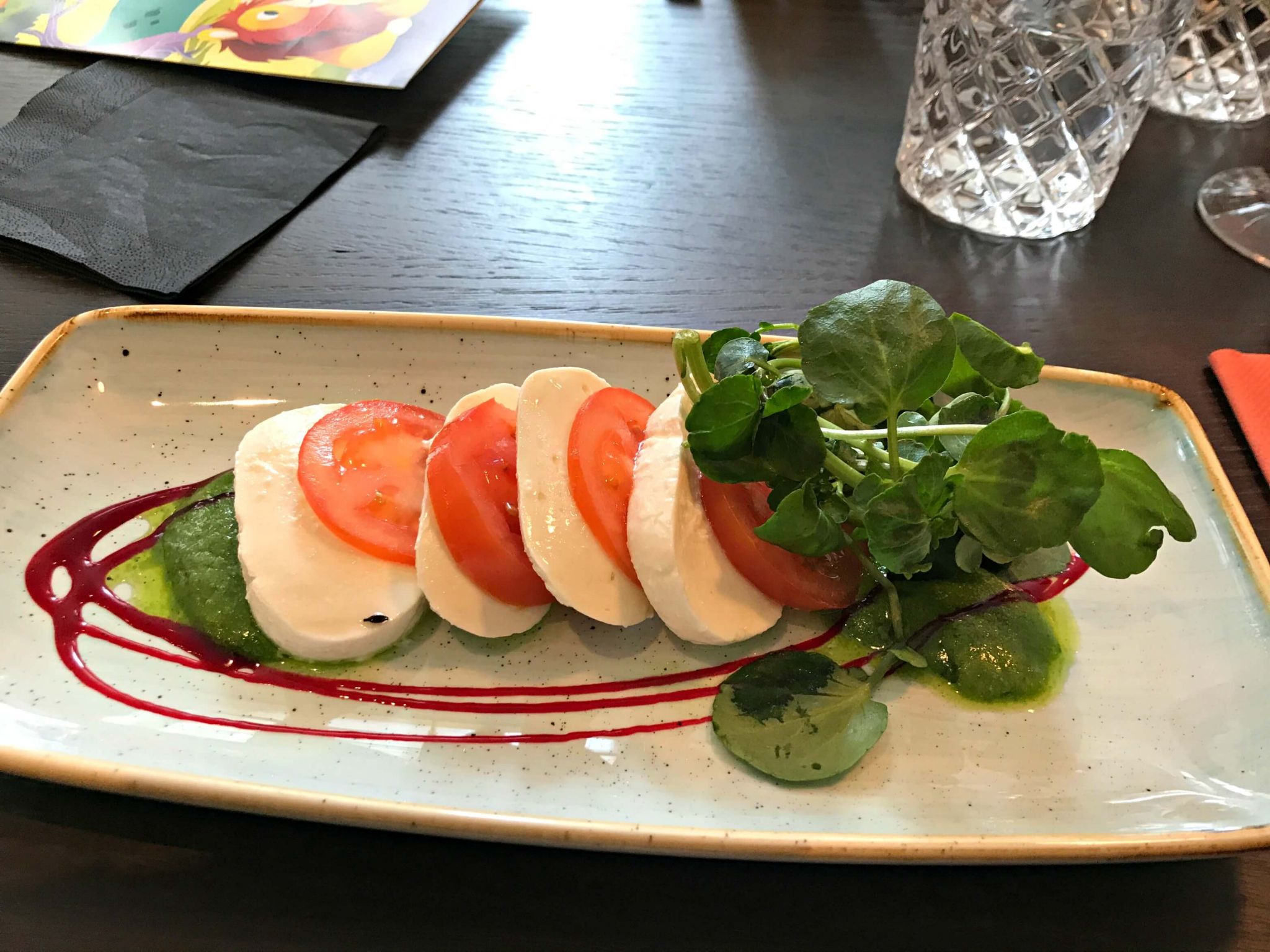 I chose the marinated tomato and mozzarella salad and was pleased to discover that the mozzarella was a decent temperature (often it is served far too cold) and had a lovely almost crumbly texture.  The rocket pesto drizzled with olive oil which accompanied the salad had an almost garlicky taste which made the dish a far more interesting combination of tastes than a standard tomato salad. 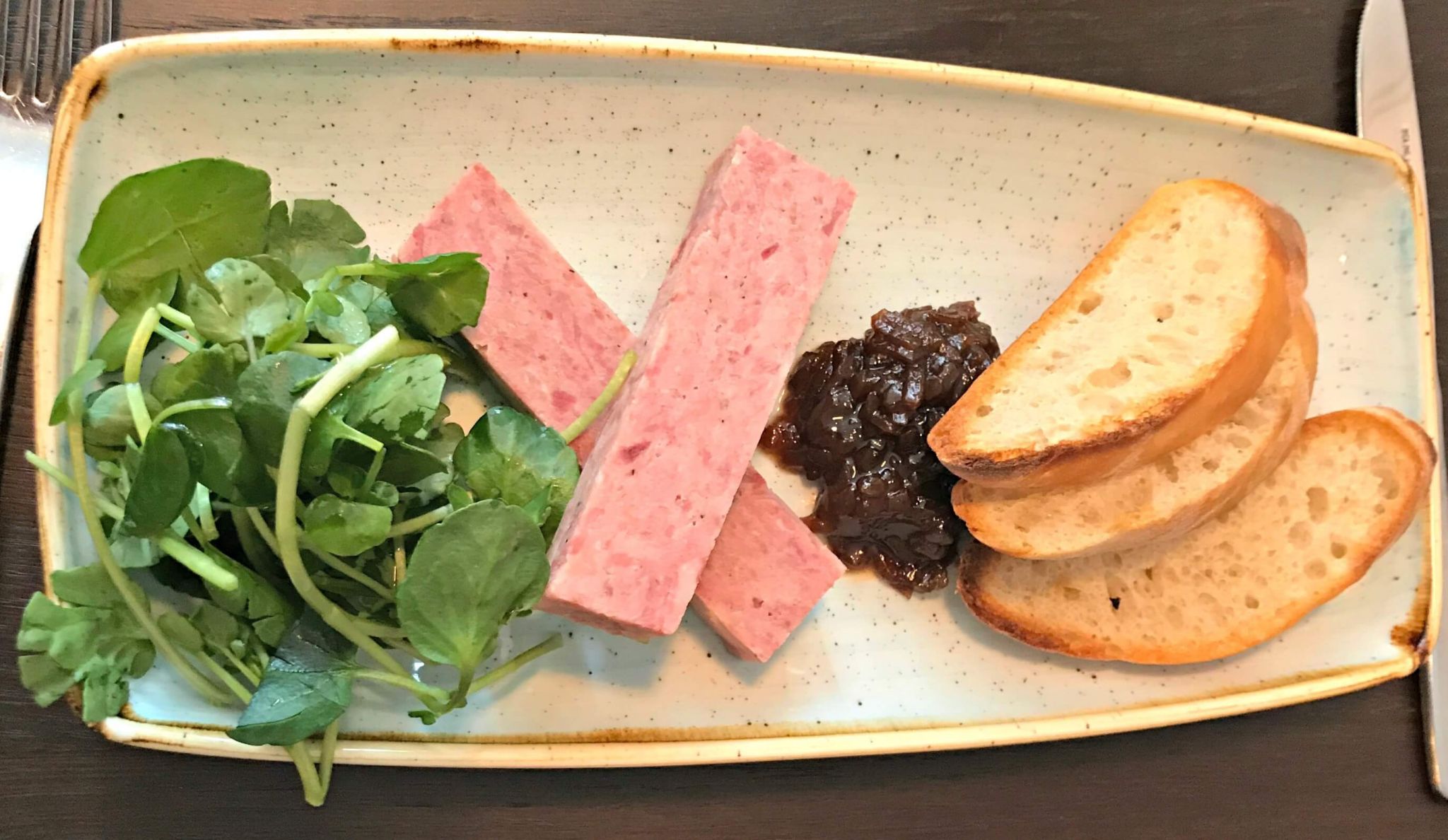 Mat had the pressed ham hock terrine with toasted ciabatta and pea shoots which was accompanied by a decent small chunk chutney.  The terrine was meaty and very tasty and was served in strips.

For our main course, Caitlin chose homemade fish fingers and Ieuan had the 4oz burger.  There’s a choice of mash, skinny fries or chunky chips and baked beans, peas or salad. You can probably guess what Caitlin and Ieuan opted for! 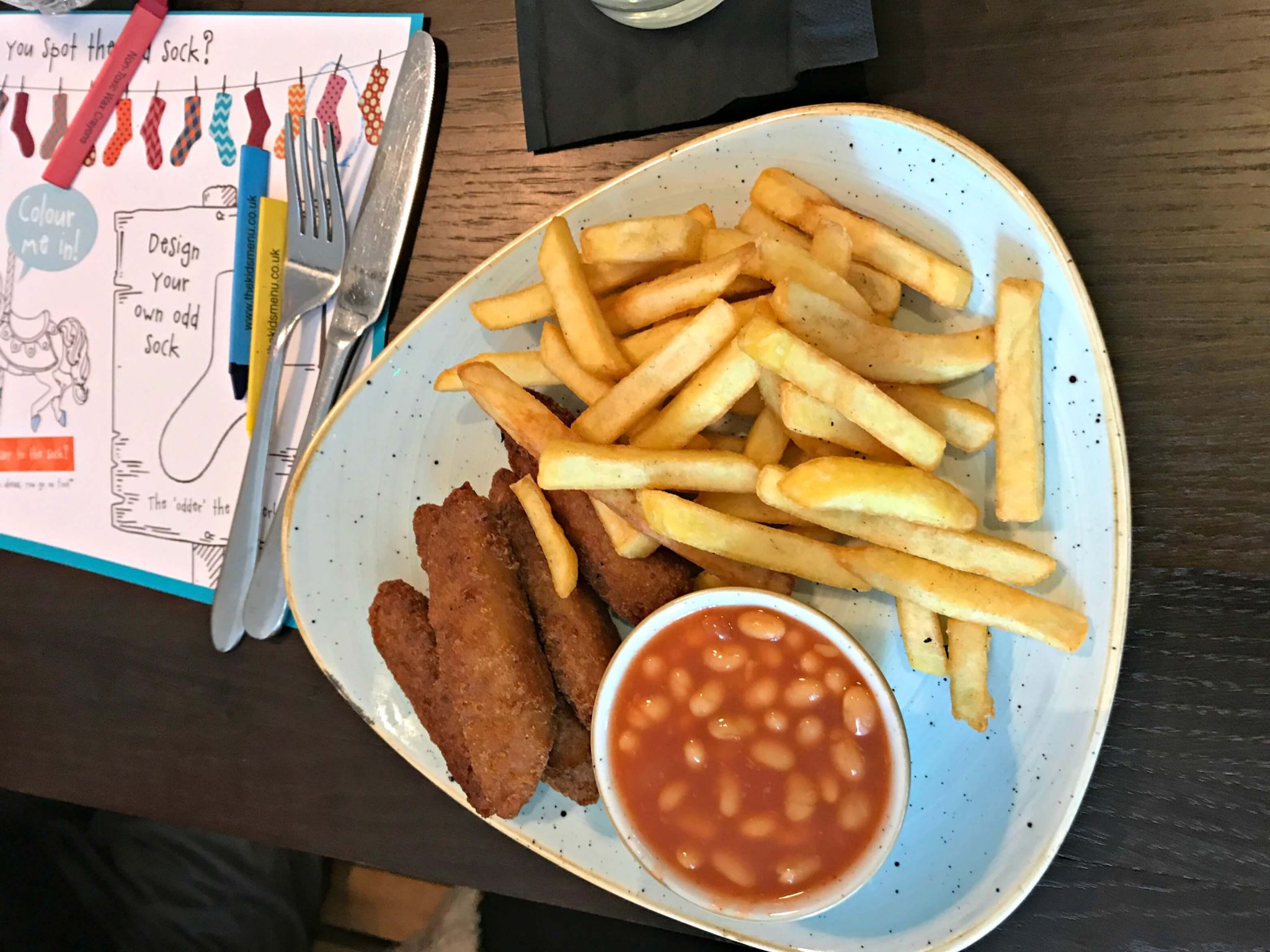 The quality of both dishes was good and the portion size ample for children their size.  The meat in Ieuan’s burger was excellent – no standard, run-of-the-mill burger here. 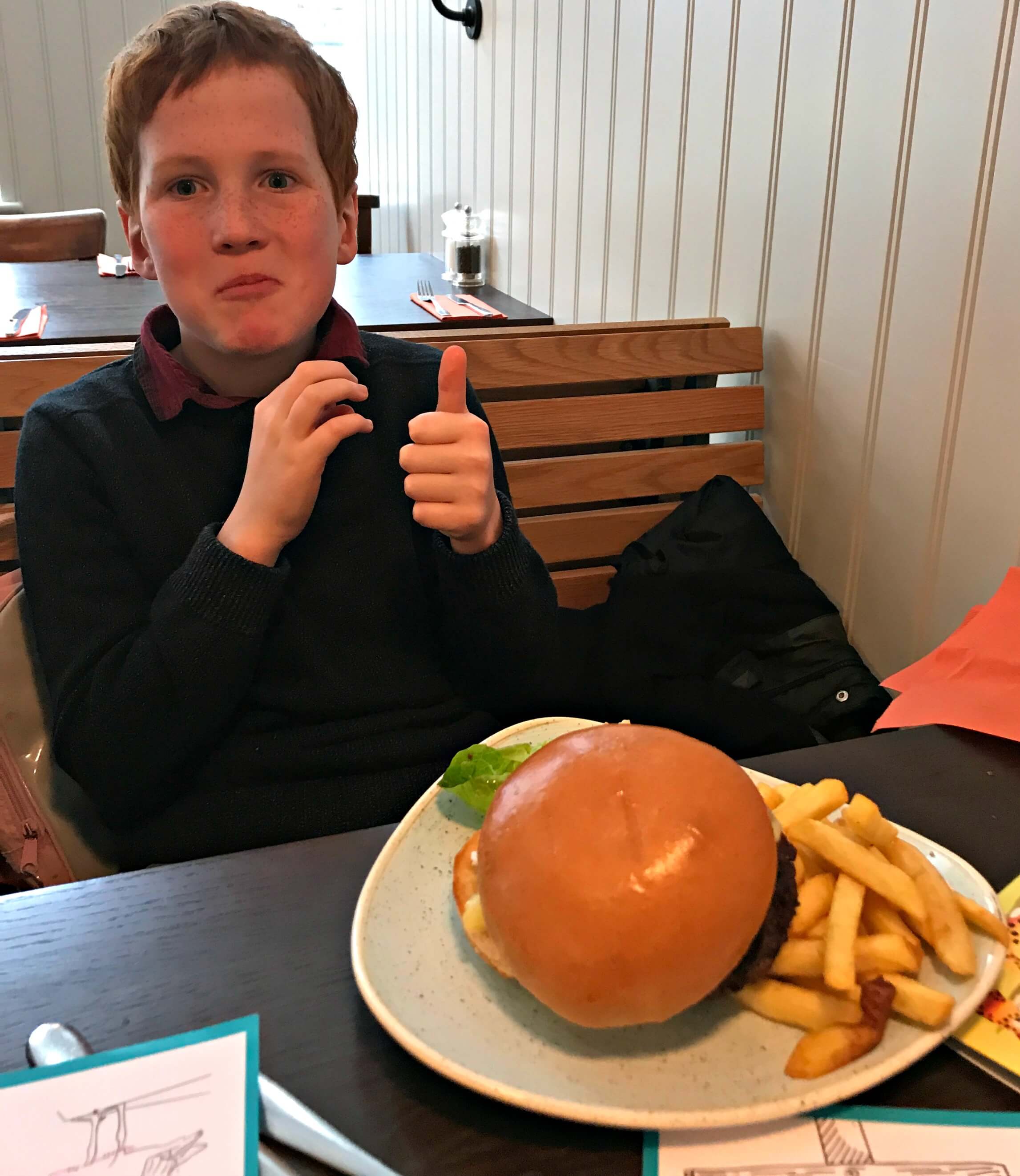 Mat chose the sirloin of beef for his main course and it came in tender slices on a pile of roast potatoes accompanied by a large Yorkshire pudding, the sight of which made Caitlin’s eyes light up, and a red wine jus. 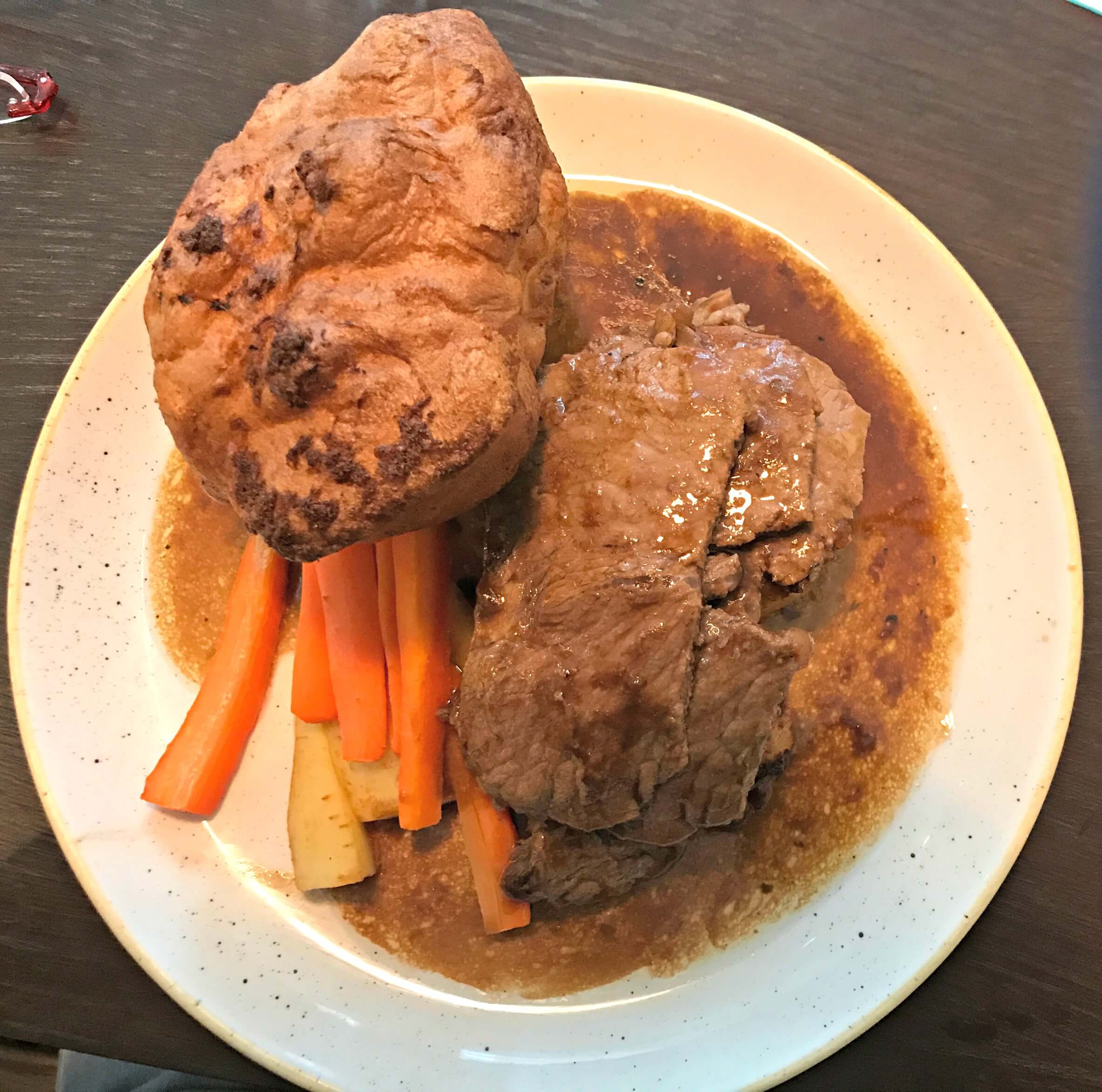 Not realising how generous the portion would be, Mat also ordered a side of root veg but he really didn’t need it.

All the mains with the exception of the pan-fried cod are served with a selection of vegetables & mashed potato.

I chose the vegetarian option, the goats’ cheese and spinach tart served with a white wine sauce.  The tart had a light pastry base and plenty of crumbled goats cheese on top. 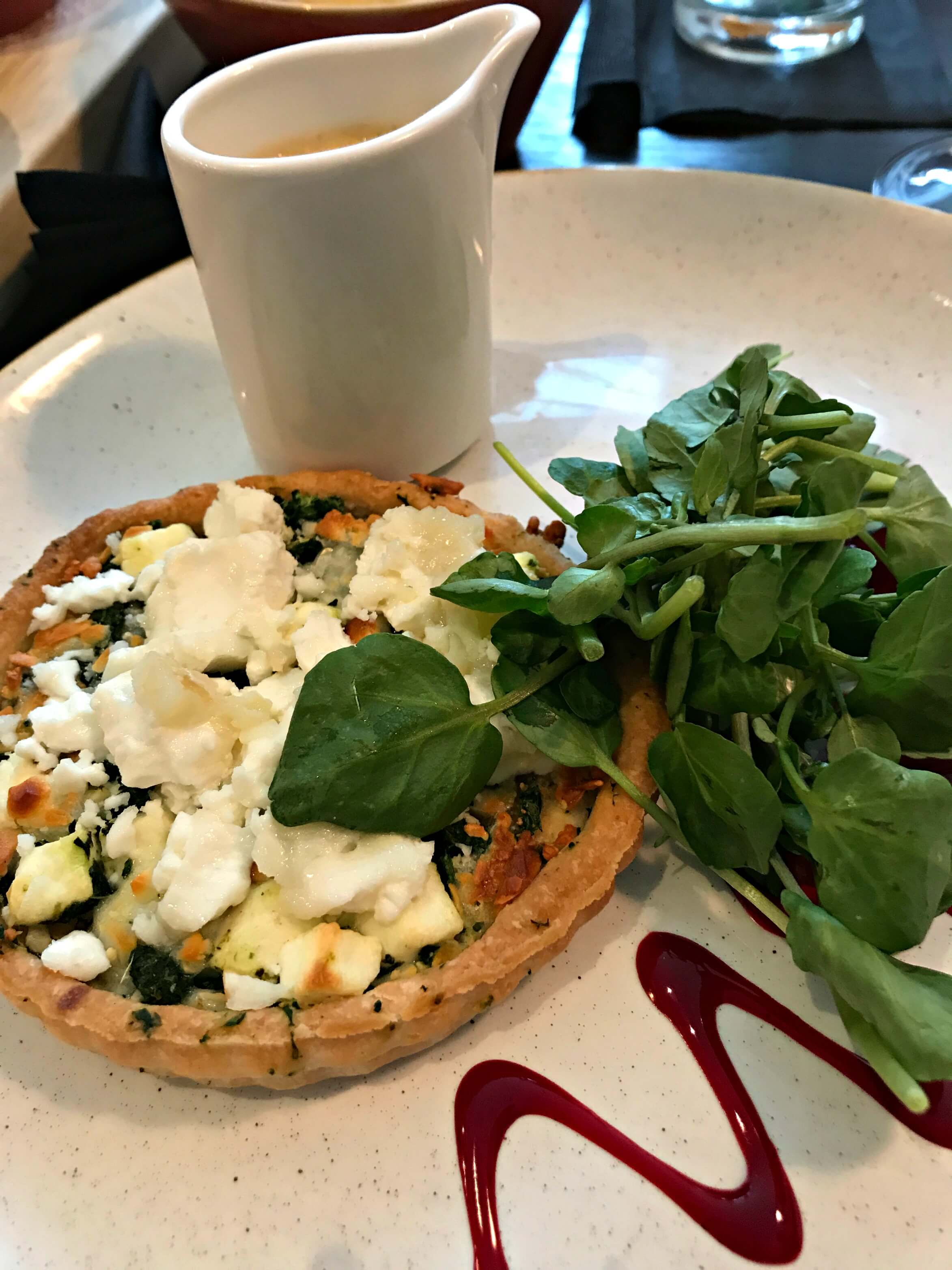 We were served mash, carrots, green beans and broccoli in generous side dishes served on a planchette and there was enough veg for all of us.  Even Ieuan had some carrots.  Well, I say some, approximately 3 pieces but progress is progress. 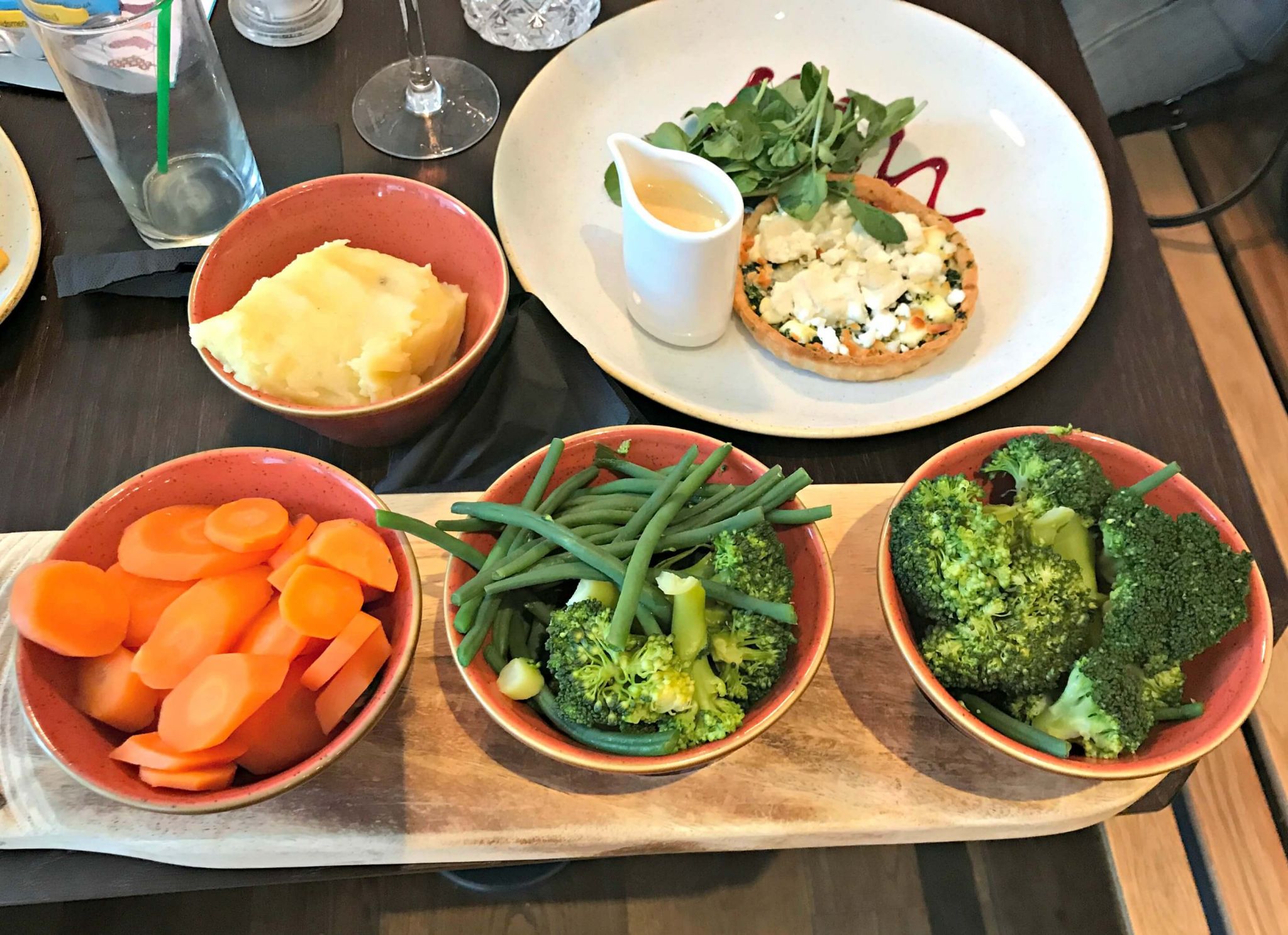 We managed to find some room for dessert and, with sticky toffee pudding being at the top of the dessert menu, it was a no-brainer for Mat.  It came piping hot and squidgy with a generous scoop of vanilla ice-cream. 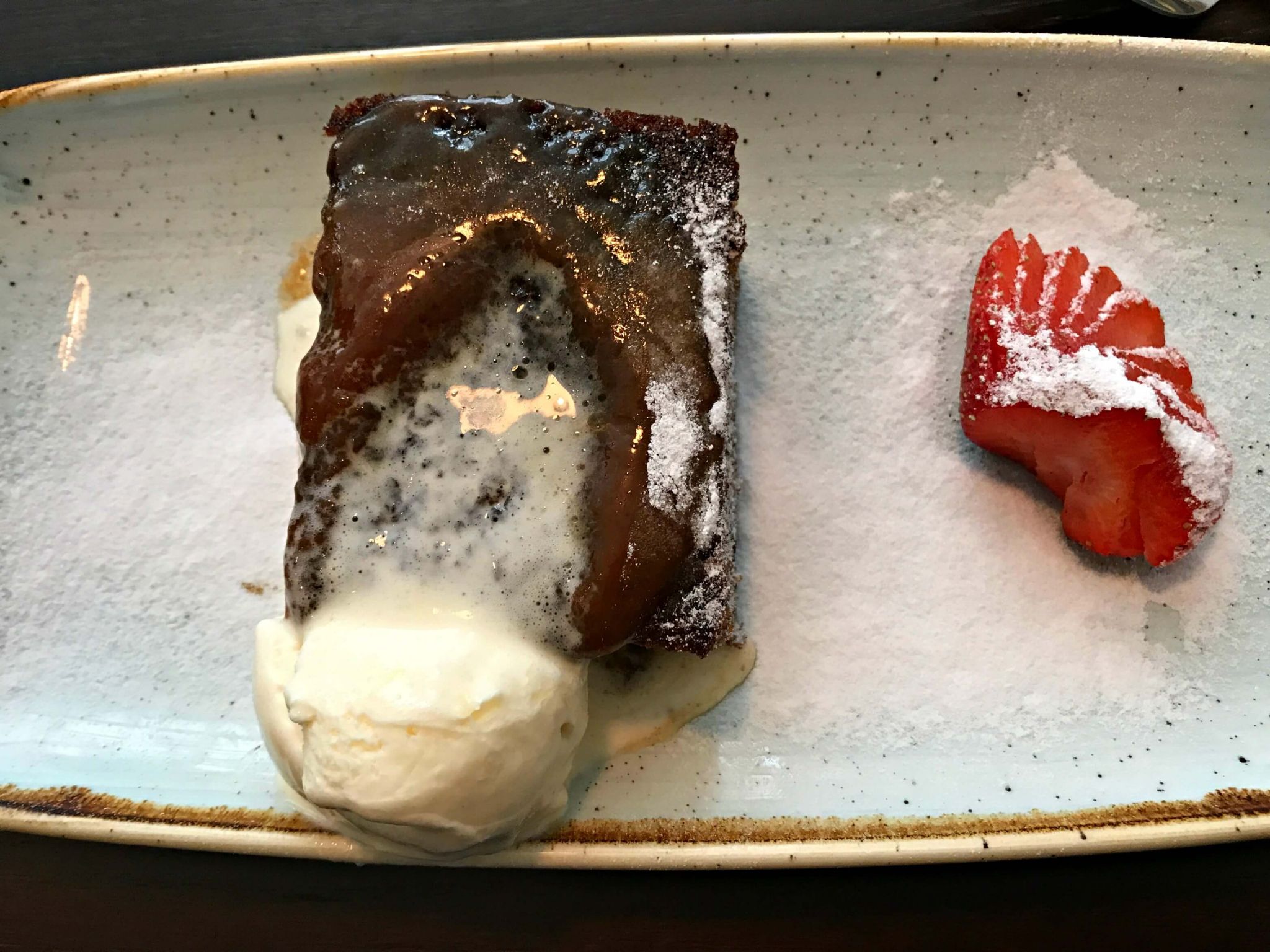 I had the Madagascan vanilla cheesecake served with a raspberry purée.  The cheesecake was satisfyingly creamy without being too light.  The base was crumbly and the filling had a definite bite with the raspberry purée adding a nice contrast. 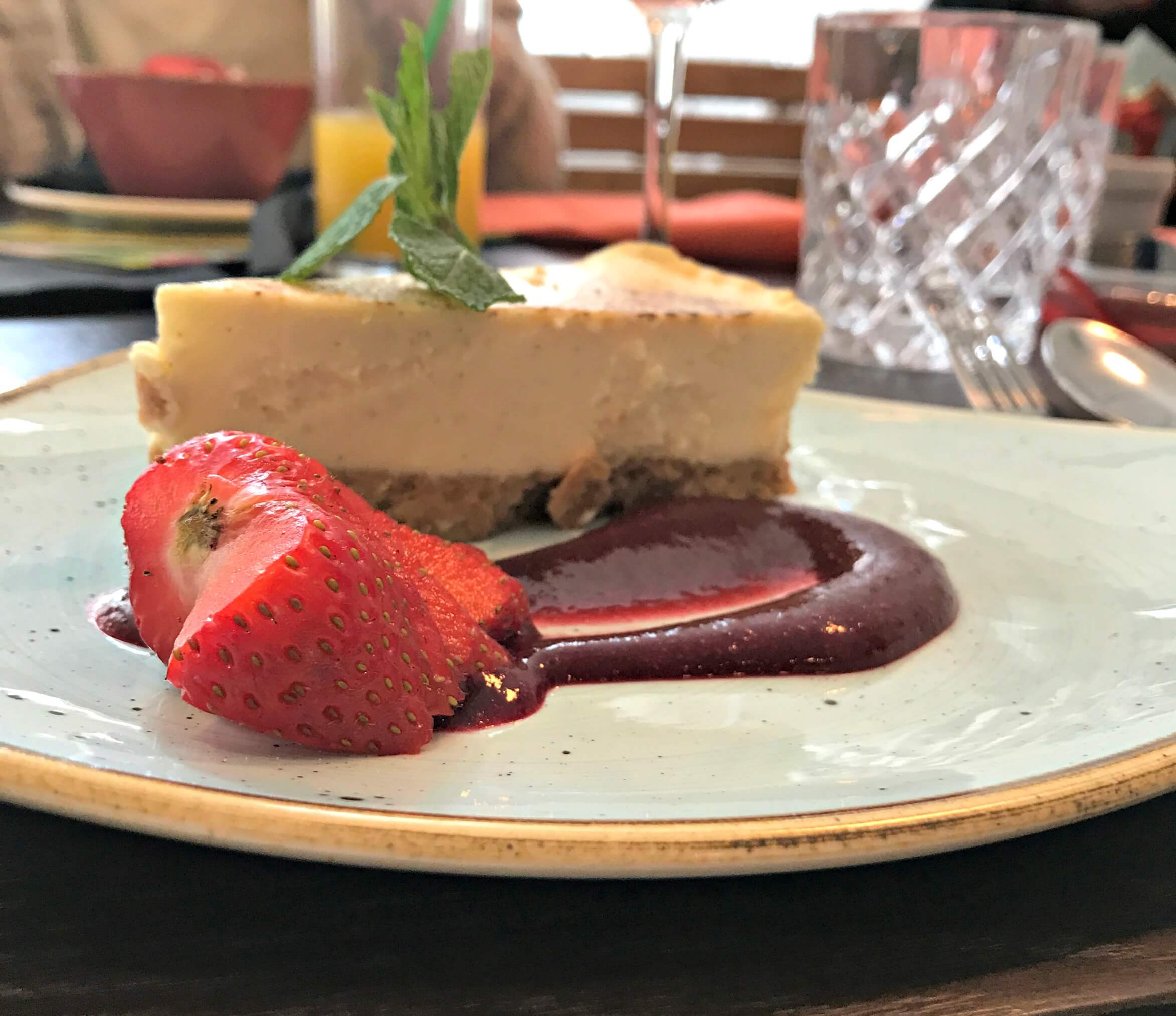 From the Little Socks Kids’ Menu, Caitlin had Eton Mess, a blend of meringue, ice cream and strawberry which wasn’t too sweet and had a nice texture. 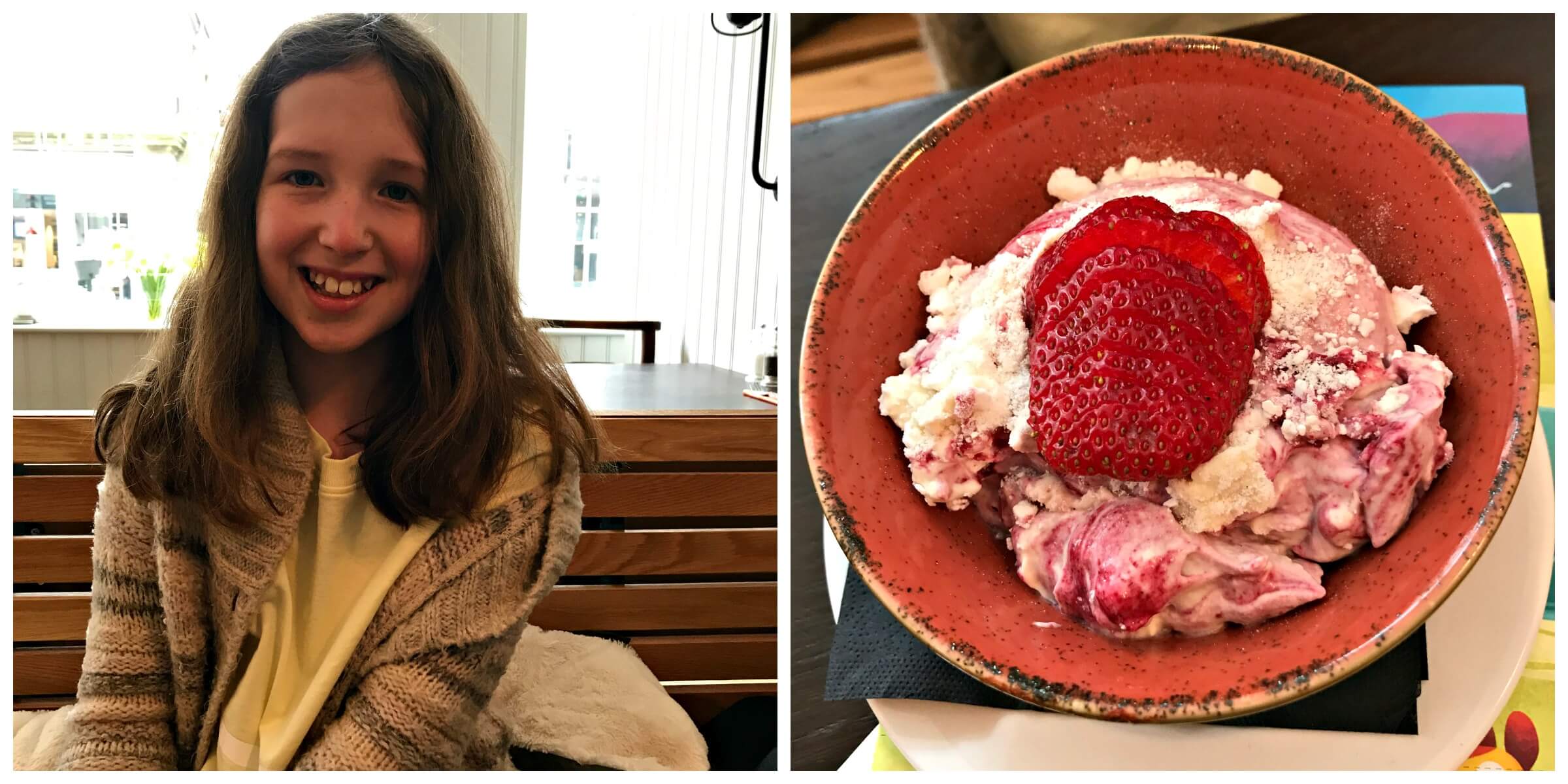 Ieuan had an enormous chocolate brownie sundae (the brownie is mixed in with the ice cream) which he made short work of. 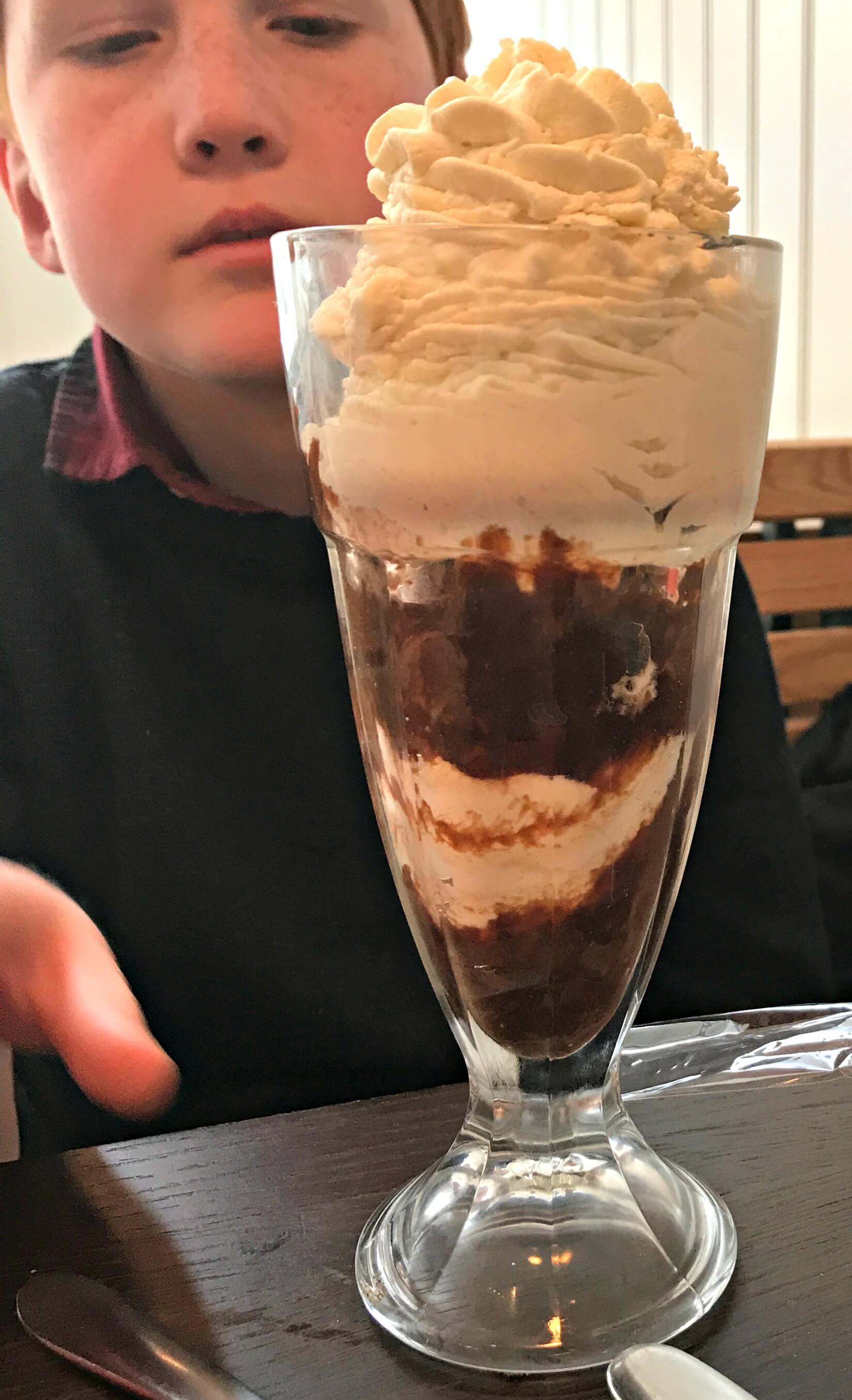 The service was great – Nicky and Lukasz looked after us wonderfully and were great with the kids.

We left feeling as if we had had a ‘proper’ Sunday lunch and at a very reasonable price.  It made such a nice change from pizza!  It was great to eat in relative peace and tranquillity compared to the often crammed restaurants in St. Davids 2.

Oddsocks Bar & Kitchen is definitely somewhere we will be visiting again.