You’d think, wouldn’t you, that the chances of wandering into a menagerie of swaying, roaring dinosaurs from the Jurassic period would be highly unlikely in the beautiful Bute Park which surrounds Cardiff Castle. 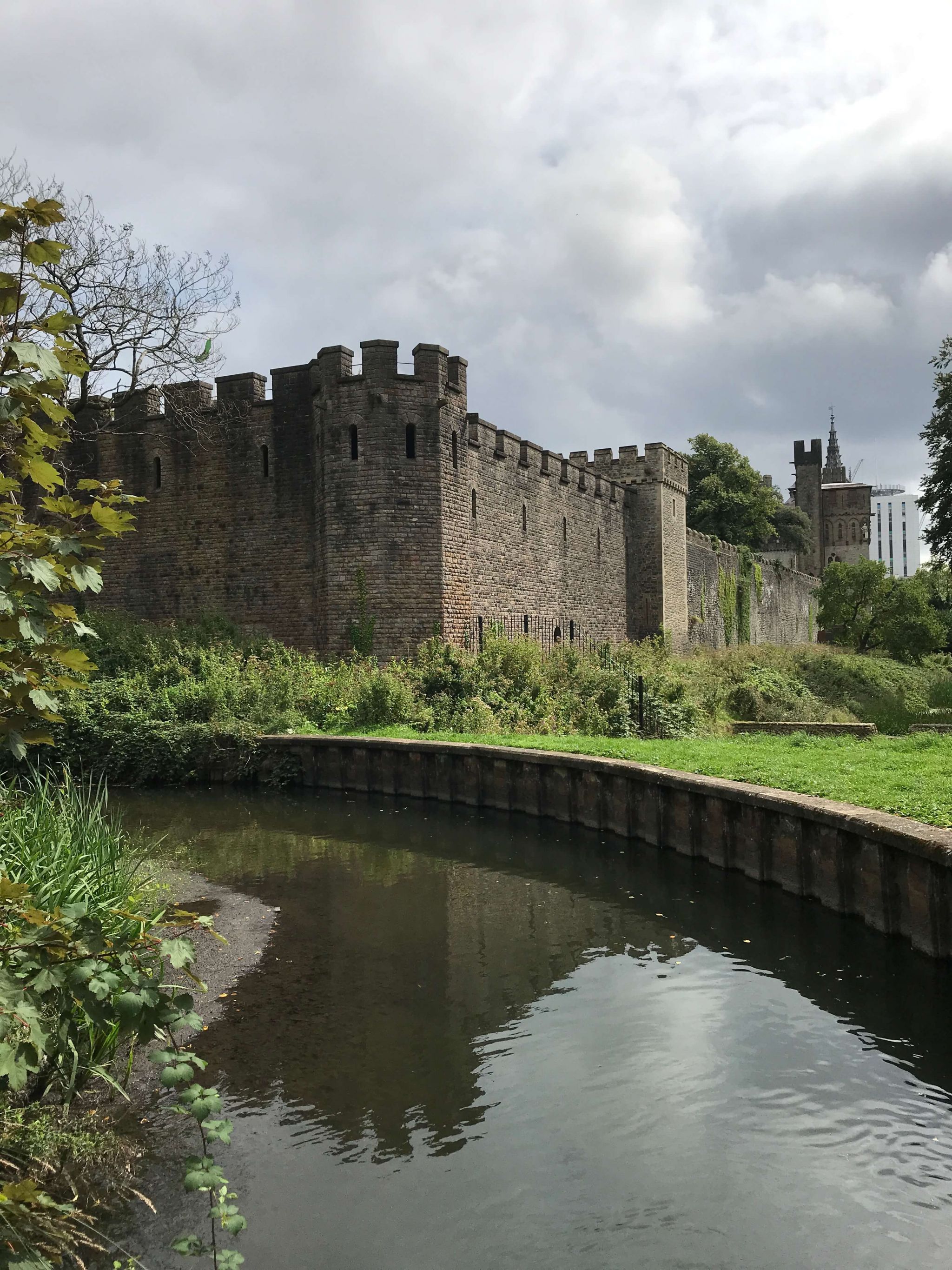 You’d be wrong.  After a brief wander through the park, this is what you’ll see. 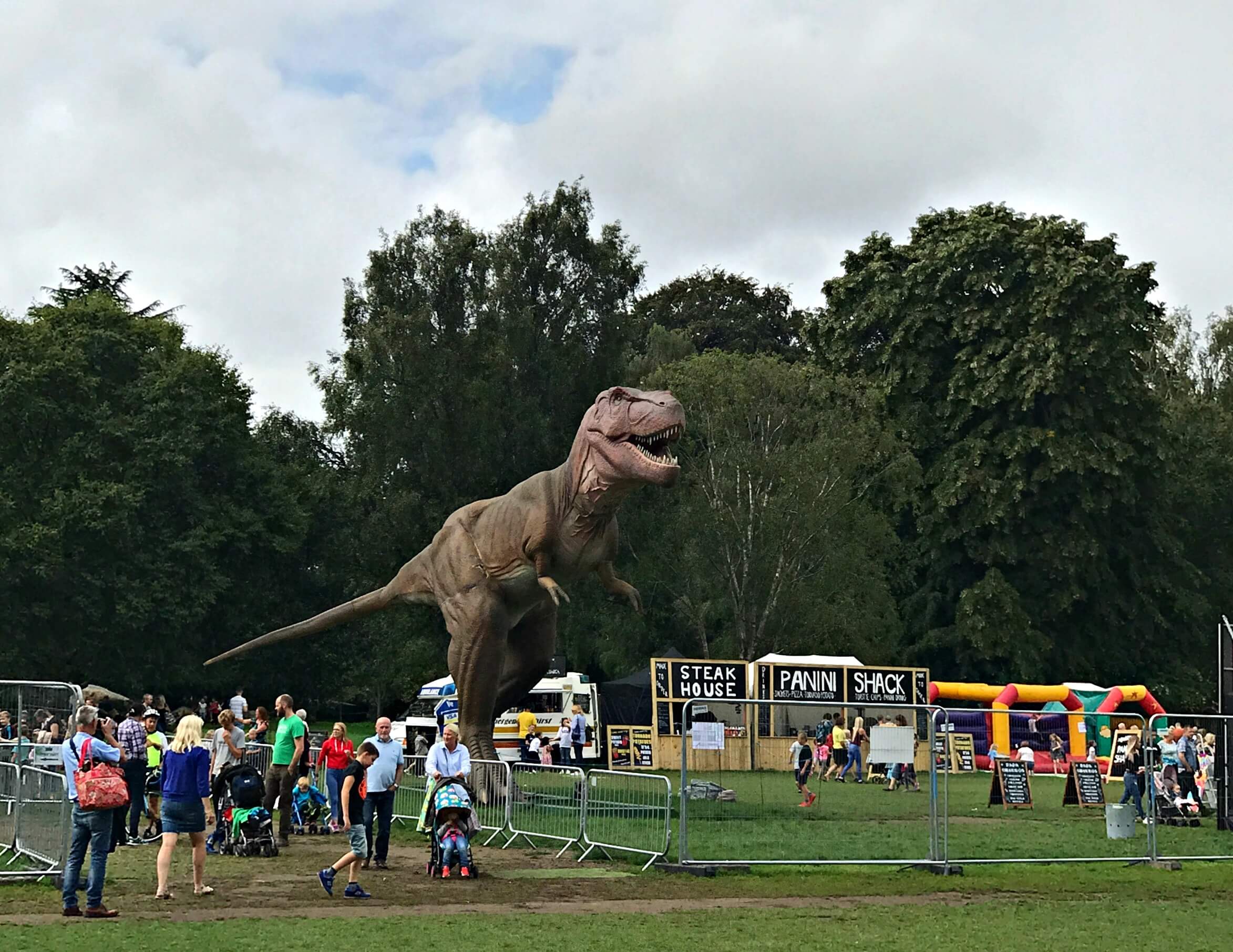 Jurassic Kingdom is a fantastic outdoor exhibition of over 30 life-sized model dinosaurs, many of which have robotic movement and amplified roars and cries. It is the first outdoor, touring, animatronic dinosaur experience of its kind to hit the UK. 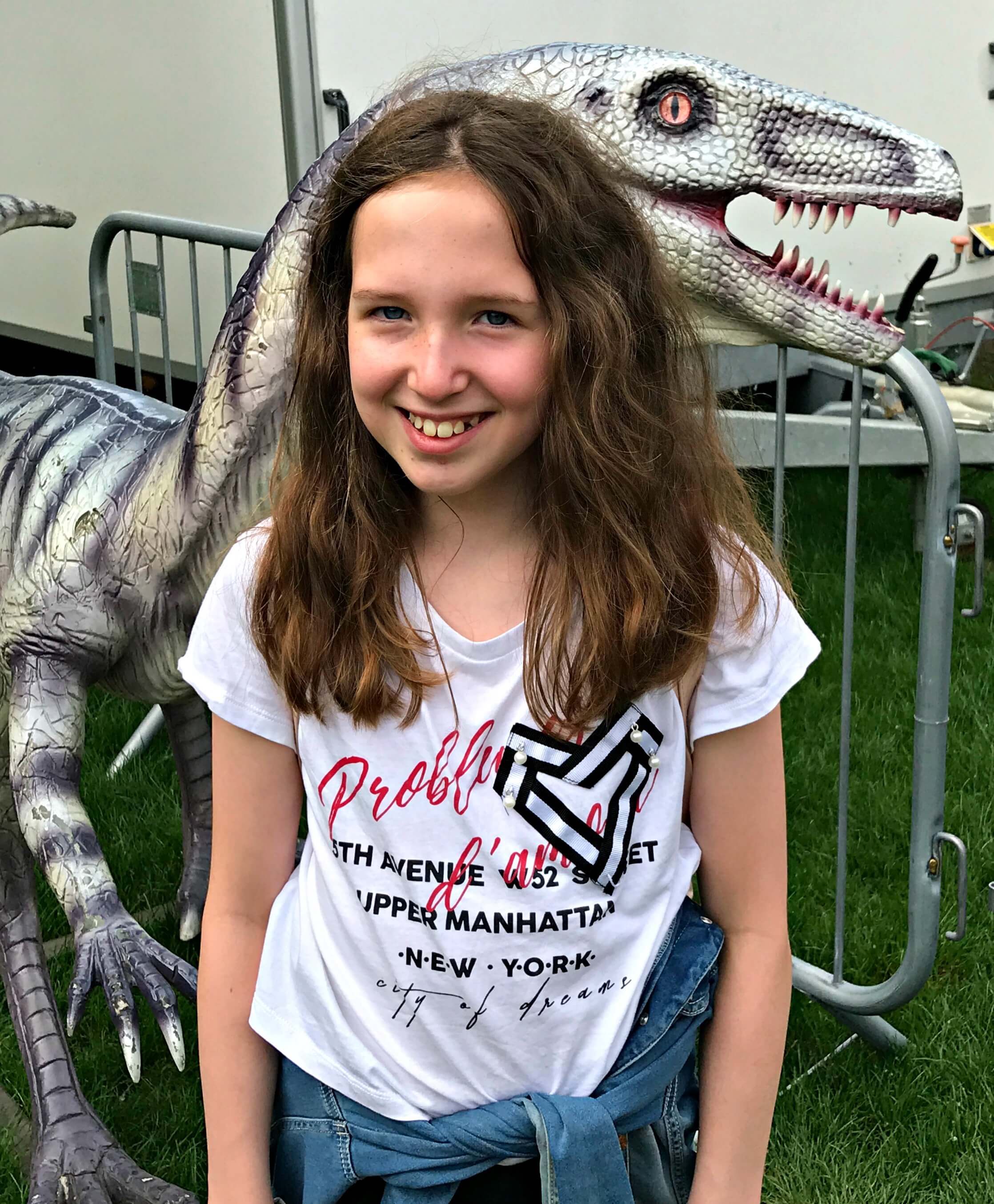 Set just inside the North Gate entrance to Bute Park, entrance back in time to the Jurassic era is available via ticket and once inside a cordoned off area of the park, visitors are treated to an impressive number of dinosaur models, each with signs explaining a bit about them. 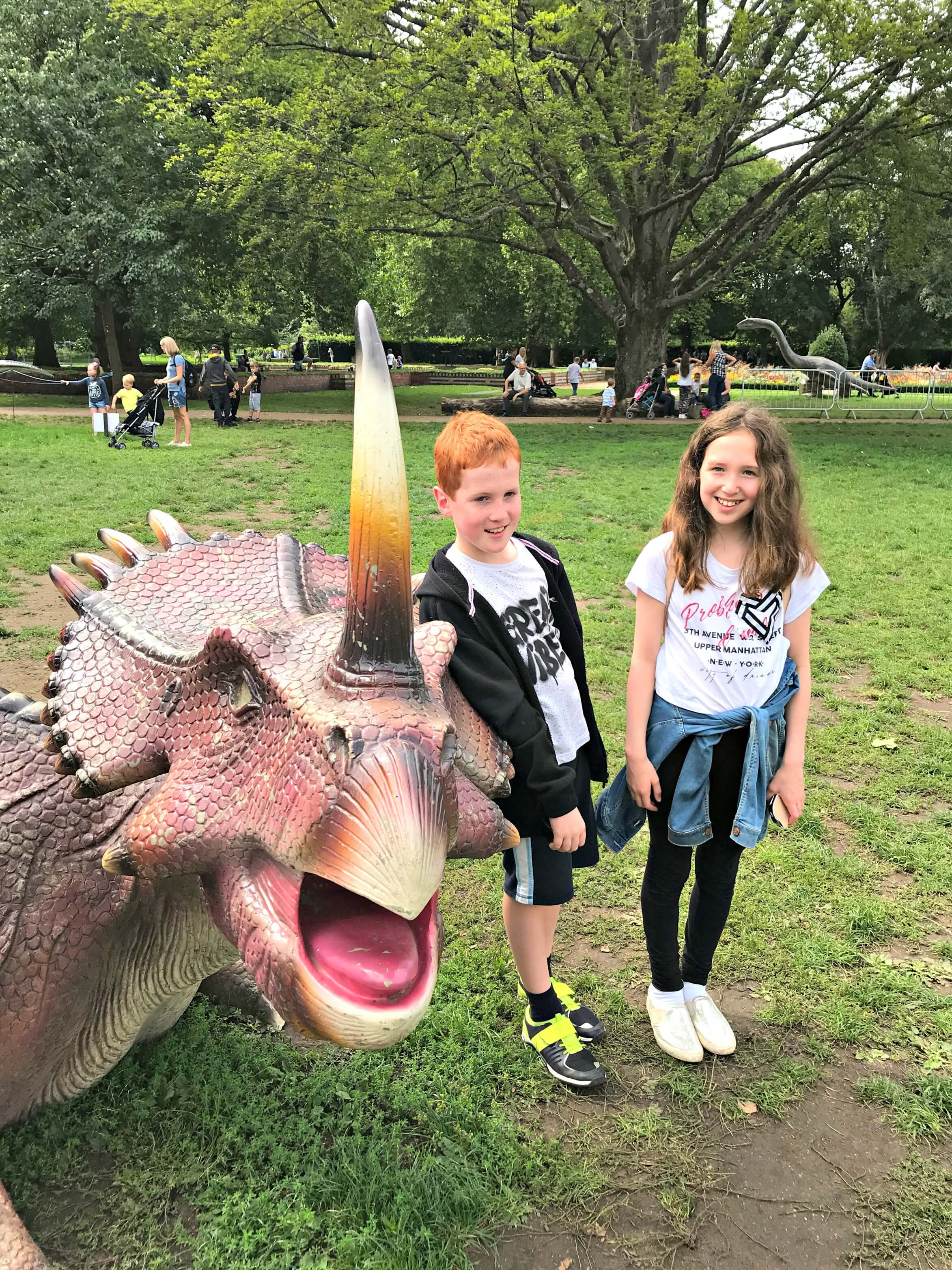 You’ll also find food and gift stands and mobile toilet facilities  (I am not sure whether these are suitable for disabled visitors). 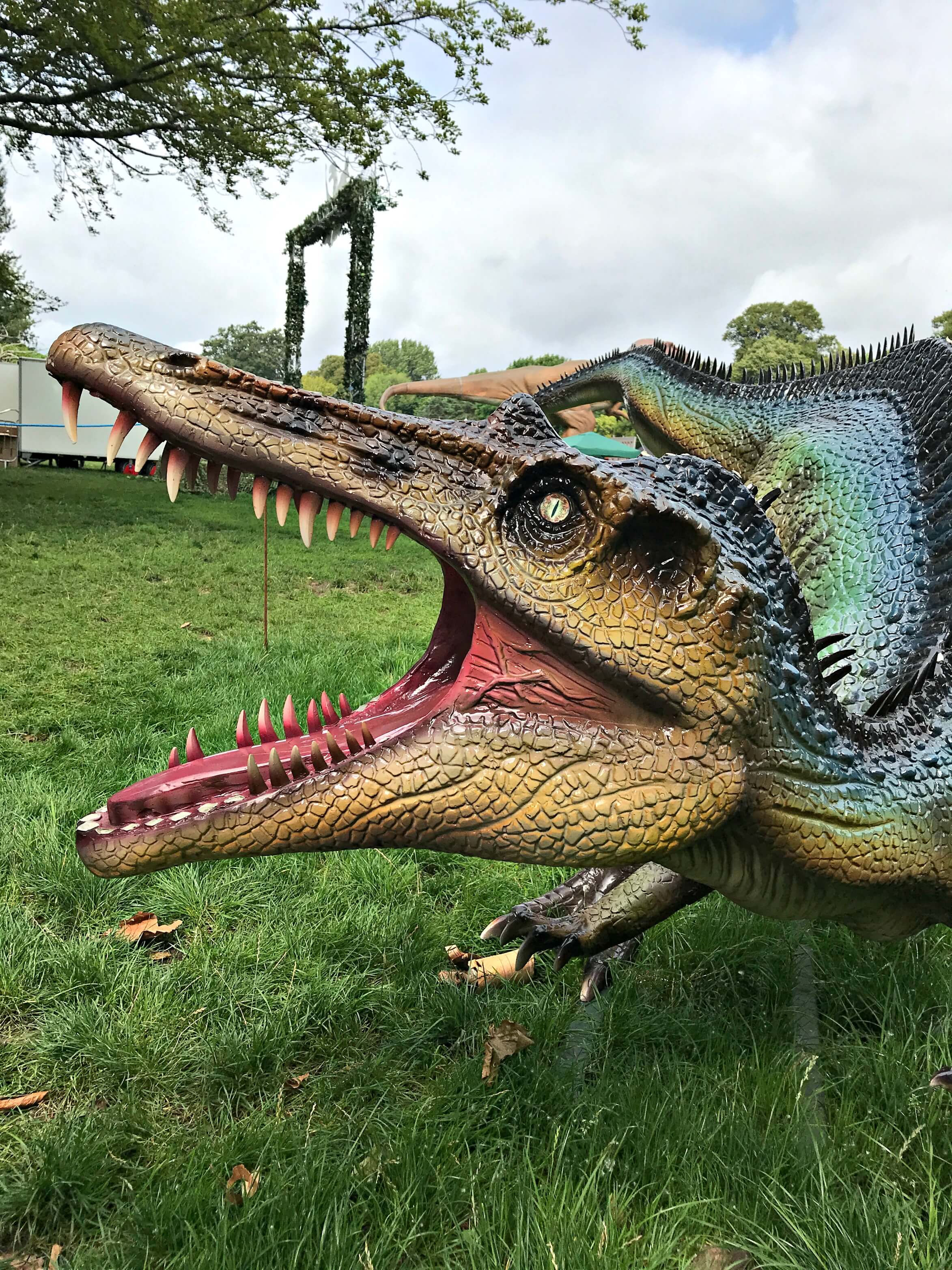 Although you can follow a path, viewing the dinosaurs in close up requires leaving the path and walking over grass which is uneven in some places. 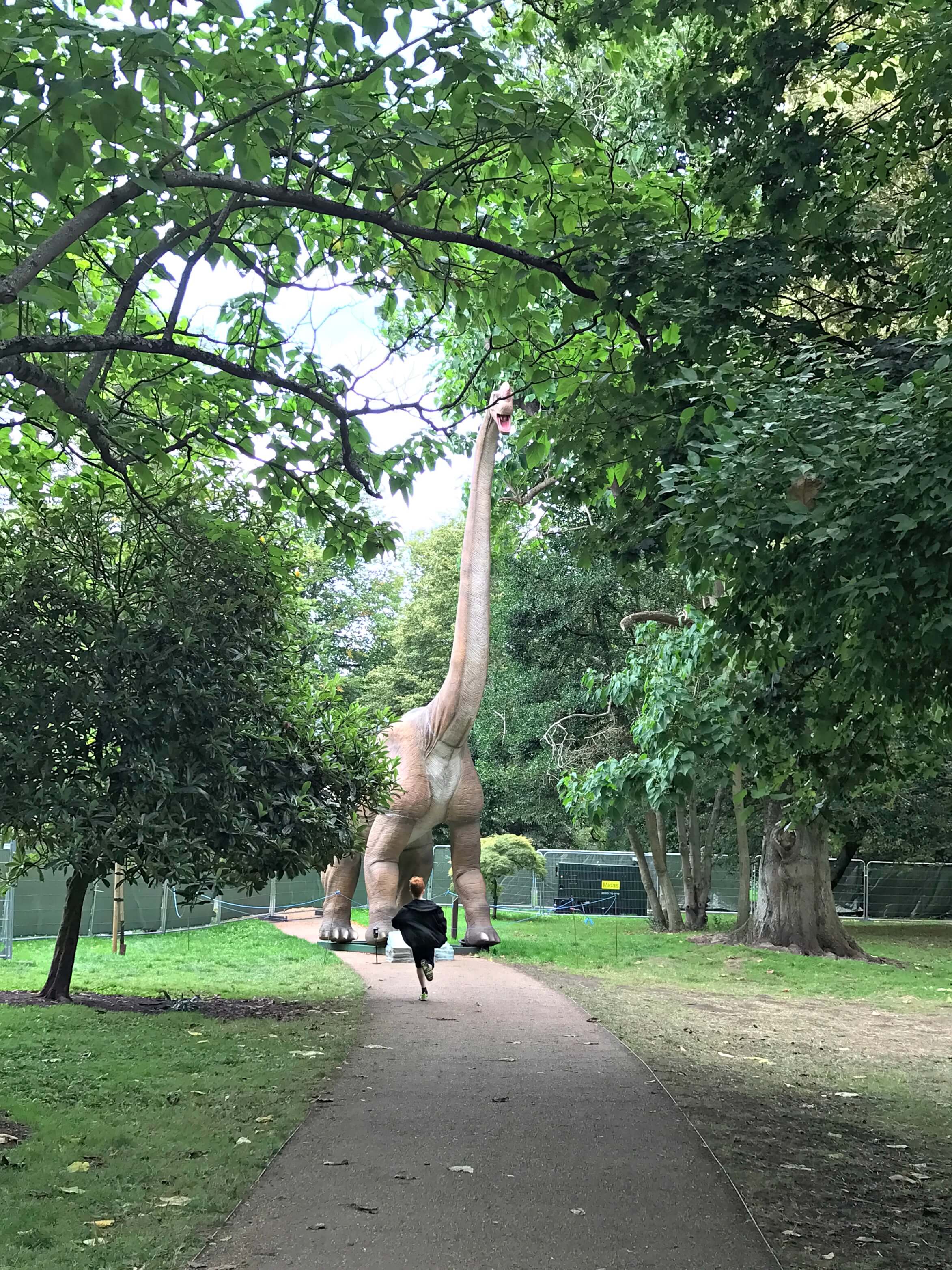 Caitlin, Ieuan and I thought the event was very well staged and the sheer size of some of the dinosaurs took your breath away.  I have to say it’s a good job that humans and dinosaurs did not co-exist on the planet as I wouldn’t fancy my chances against any of them. 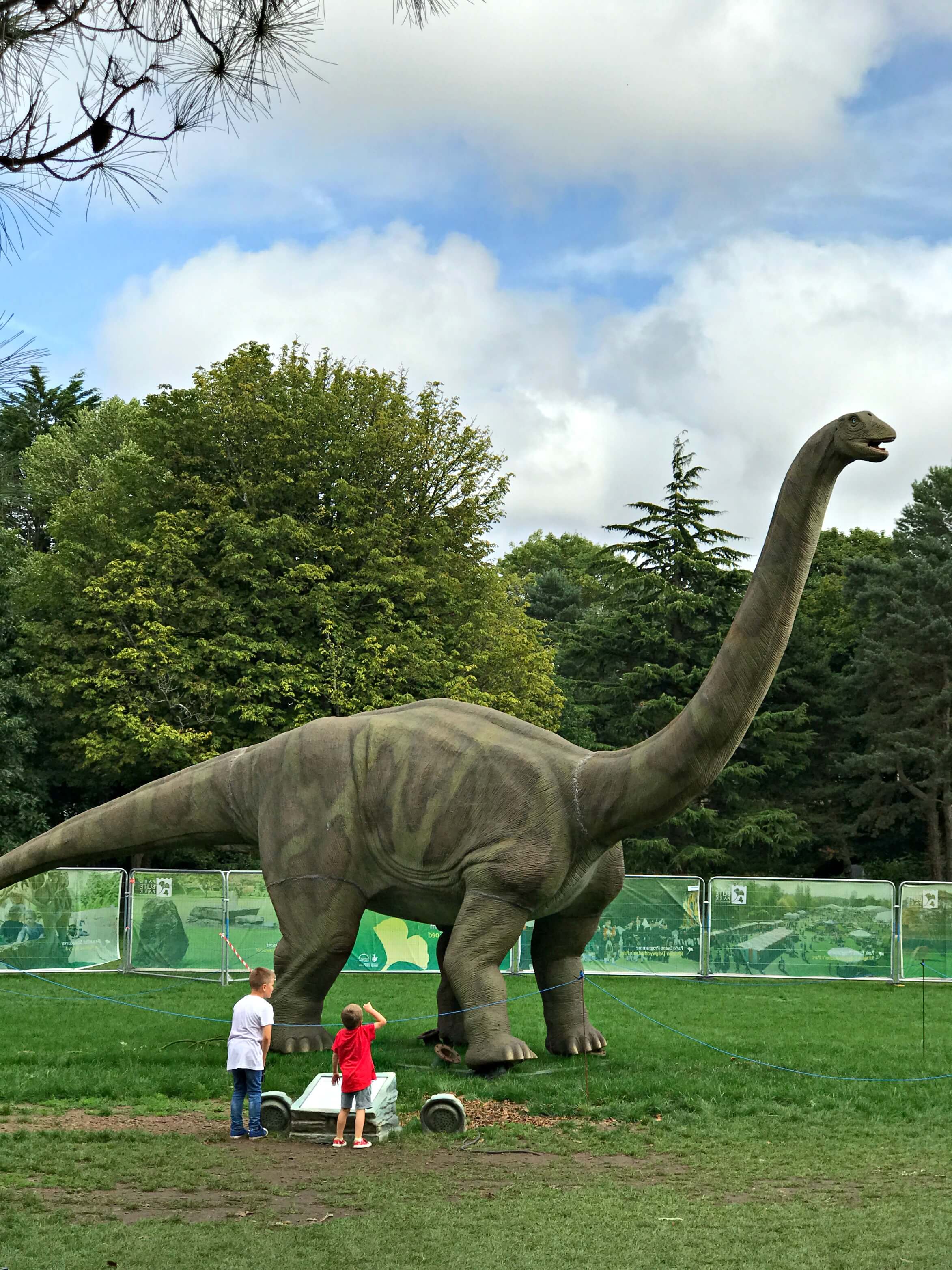 Whilst this is a family friendly event, I’d say that, for kids, 7 is probably the maximum age for real engagement but this display certainly puts more flesh on the bones than the display of dinosaur skeletons over at National Museum Cardiff. 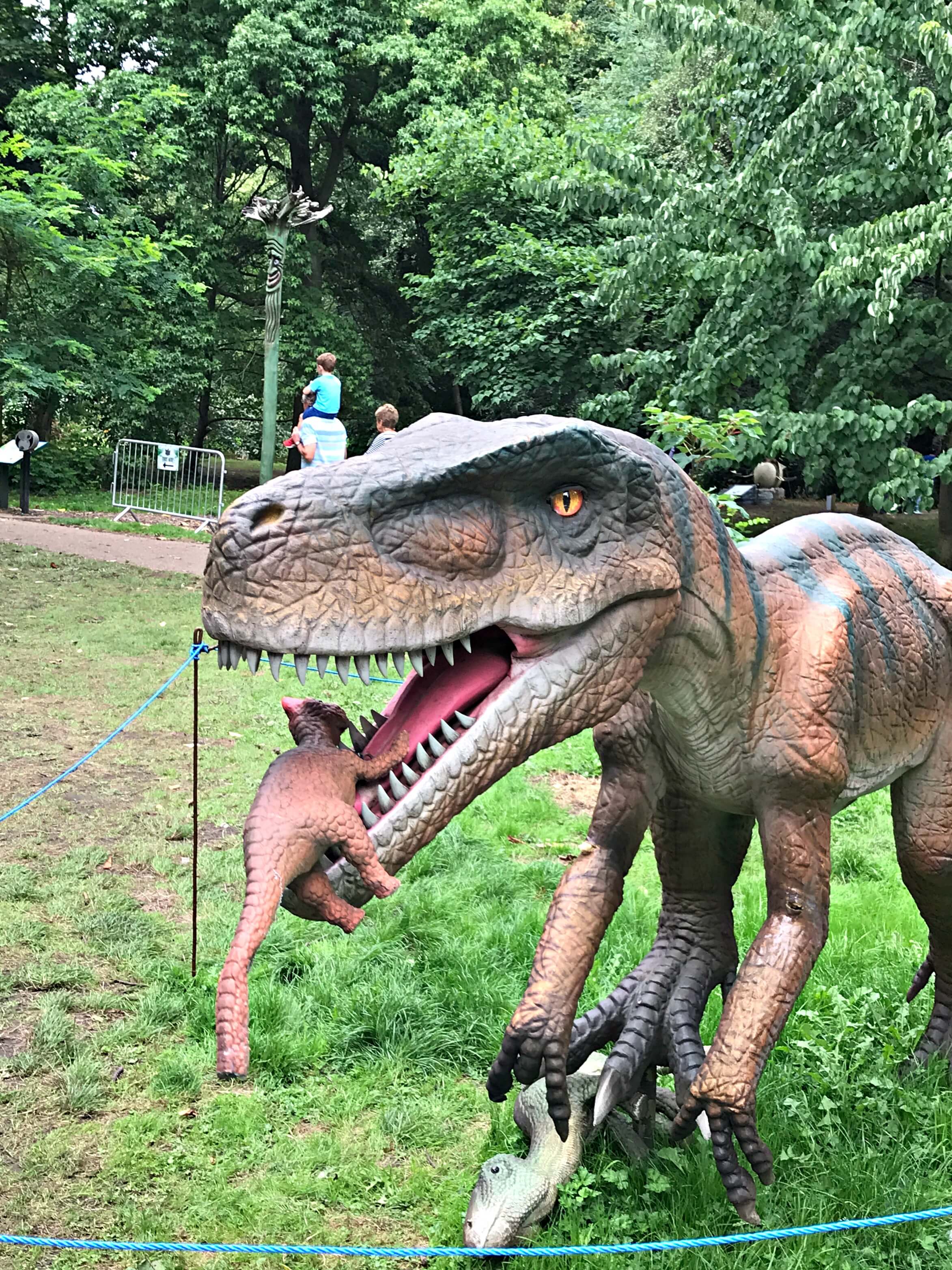 Actually, I think dinosaur enthusiasts could combine both displays in one visit for a full-on dinosaur experience.

There is also a 30-minute viewing experience produced by the BBC which plays on a large projection screen in the educational marquee.  We managed to miss this, unfortunately, and I think it would have been good to have had this mentioned to us on arrival by staff. 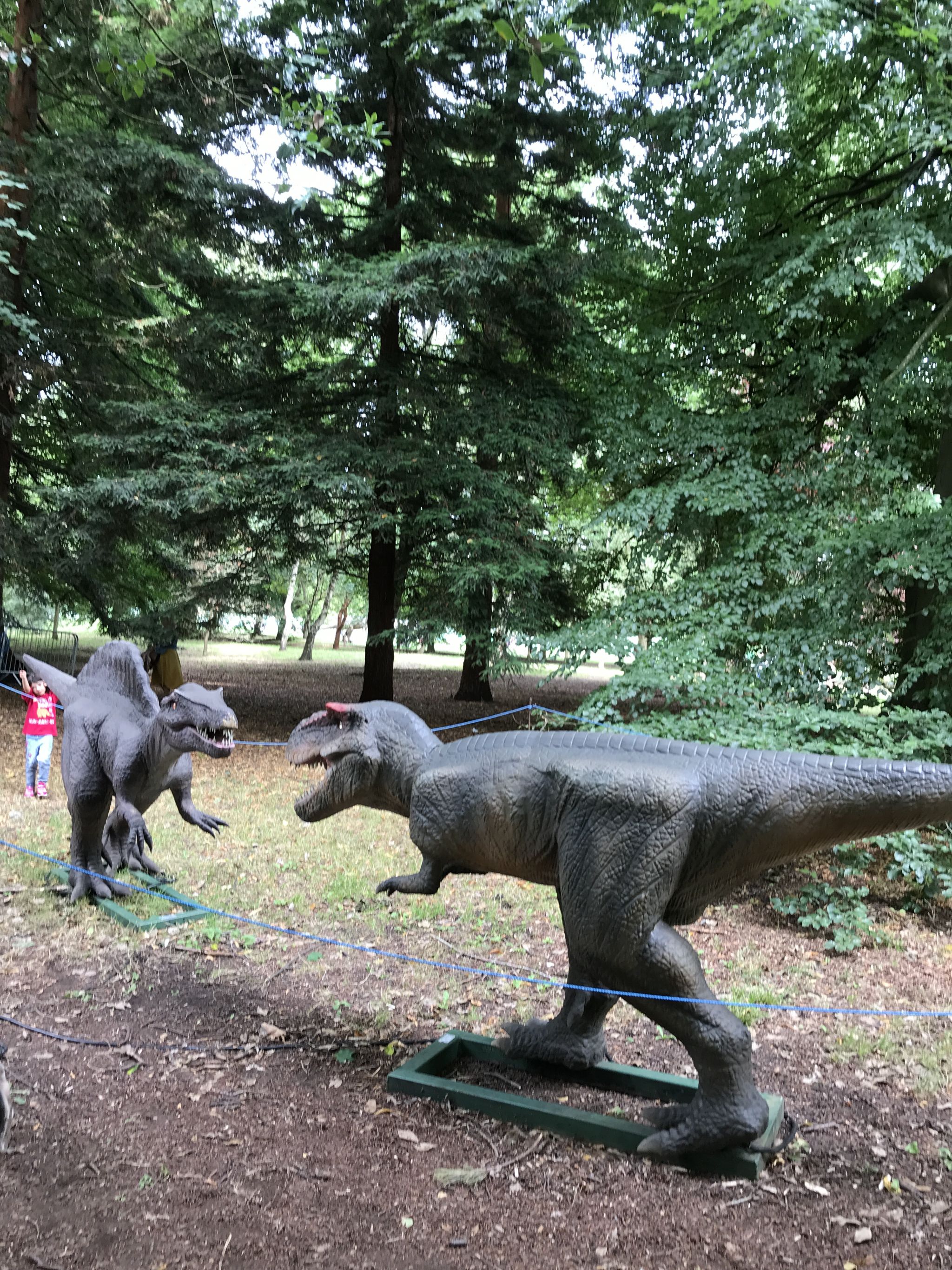 We spent just over an hour wandering around the displays but there were plenty of families who had brought a picnic and were making the most of the late August sunshine.  I would say, though, that the dinosaurs are not the quietest of dining companions. 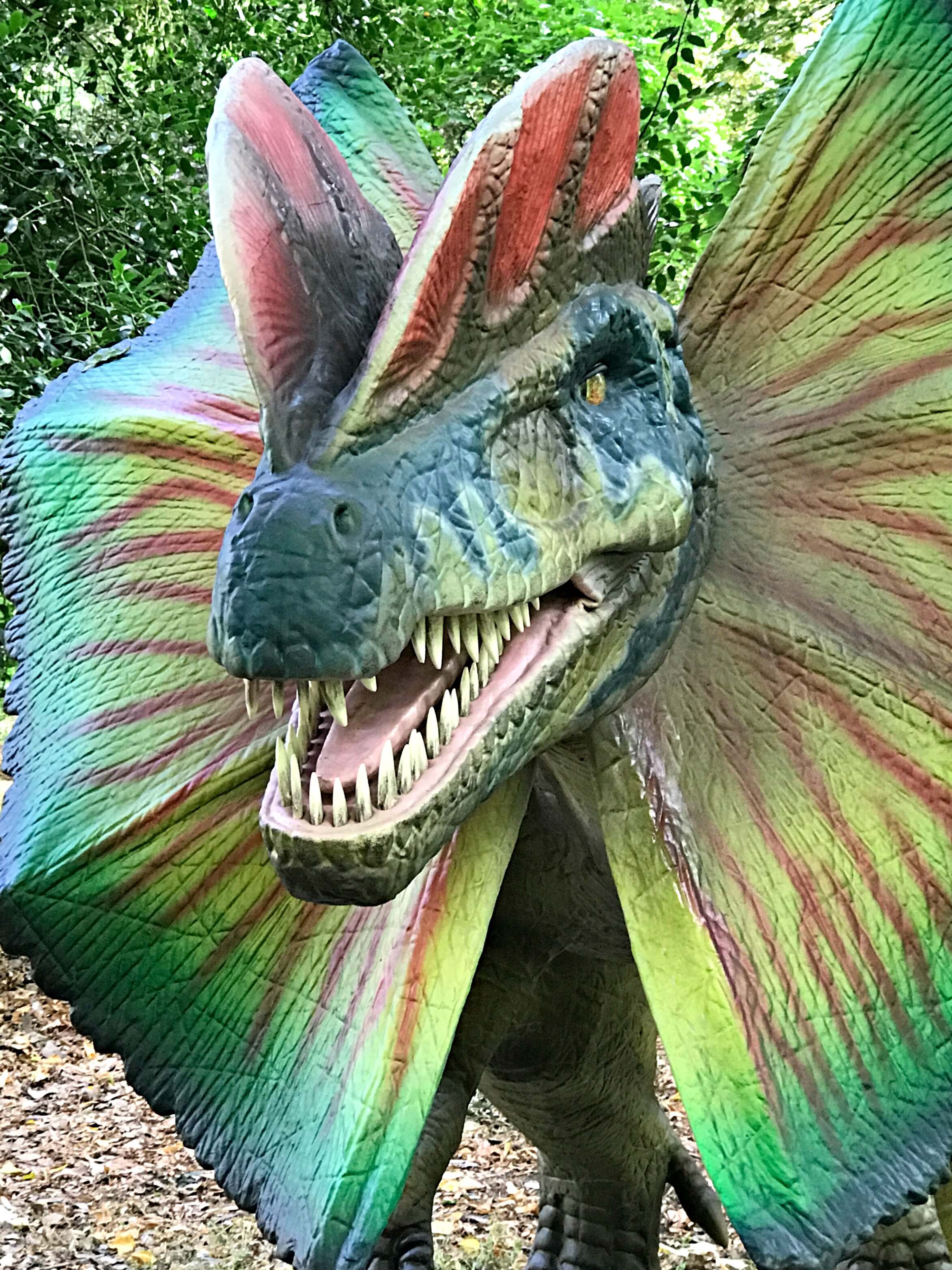 If you don’t fancy the food and drink on offer within the Jurassic Kingdom itself, you could always escape to The Pettigrew Tearooms for a fortifying cuppa and a slice of cake. I did try to lure the kids in there but Caitlin’s latest obsession is Peach Iced Tea (no idea why) and we were swiftly frogmarched back to Queen Street in the quest for this, in my view, rather odd substance.

Jurassic Kingdom Cardiff is available to visit up until 27 August and is open from 10 am to 6 pm Wednesday to Sunday.

Prices start from £11.50 for adults, £10.50 concessions, £9.50 for children, and £38 for a family ticket. Plus, children under two go free.  You can buy tickets at www.jurassickingdom.uk/tour/. Note that tickets are slightly more expensive if bought on the door.

After the 27th, the dinosaurs are moving on to Nottingham from 20th October to 4th November.  The venue has yet to be confirmed so keep your eyes peeled.

If you get the chance to visit Jurassic Kingdom at Bute Park, Cardiff, do.  It’s a great experience for kids and anything that’s outside in the fresh air has to be a good thing after almost 6 weeks of iPads and Xbox.

Does that make me sound like a bit of a dinosaur?  You know what?  I don’t care.

*Tickets were received for the purpose of this review.