If you’re anything like us, you’ll have your favourite restaurants.  Nothing wrong with that, of course, but you’ll probably find that you eat the same dishes every time you go.  Eventually, you might find yourself in a bit of a gastronomic rut. 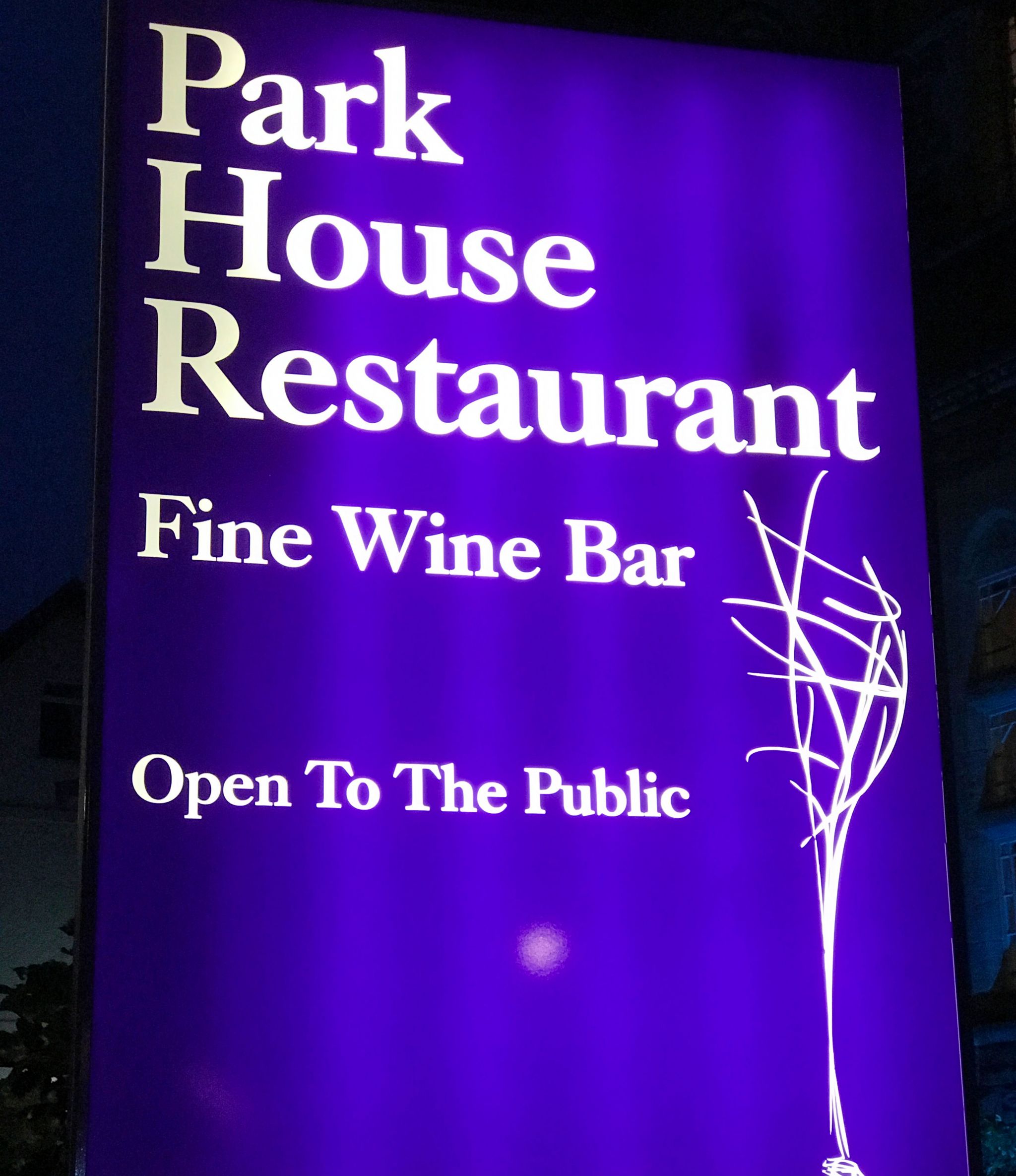 If you’ve watched Masterchef, you might have found yourself bemused at Torode and Wallace’s rhapsodising over the textures and taste combinations presented in the contestant’s dishes and wondered how a dish could be ‘complex’ or offer layers of taste. We were about to learn. 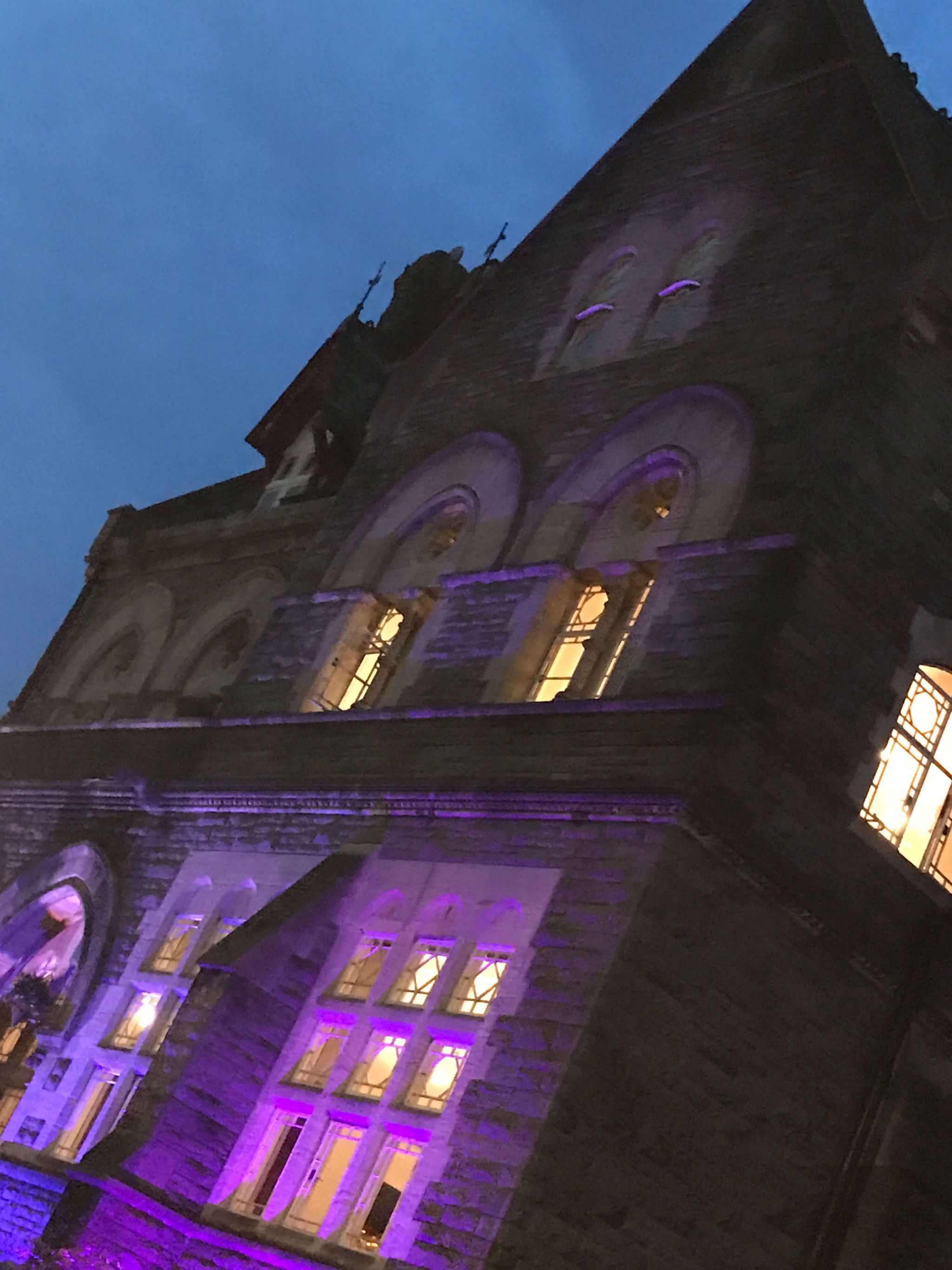 The Husband and I were recently invited to dine at Park House Restaurant Cardiff and what an experience it was. 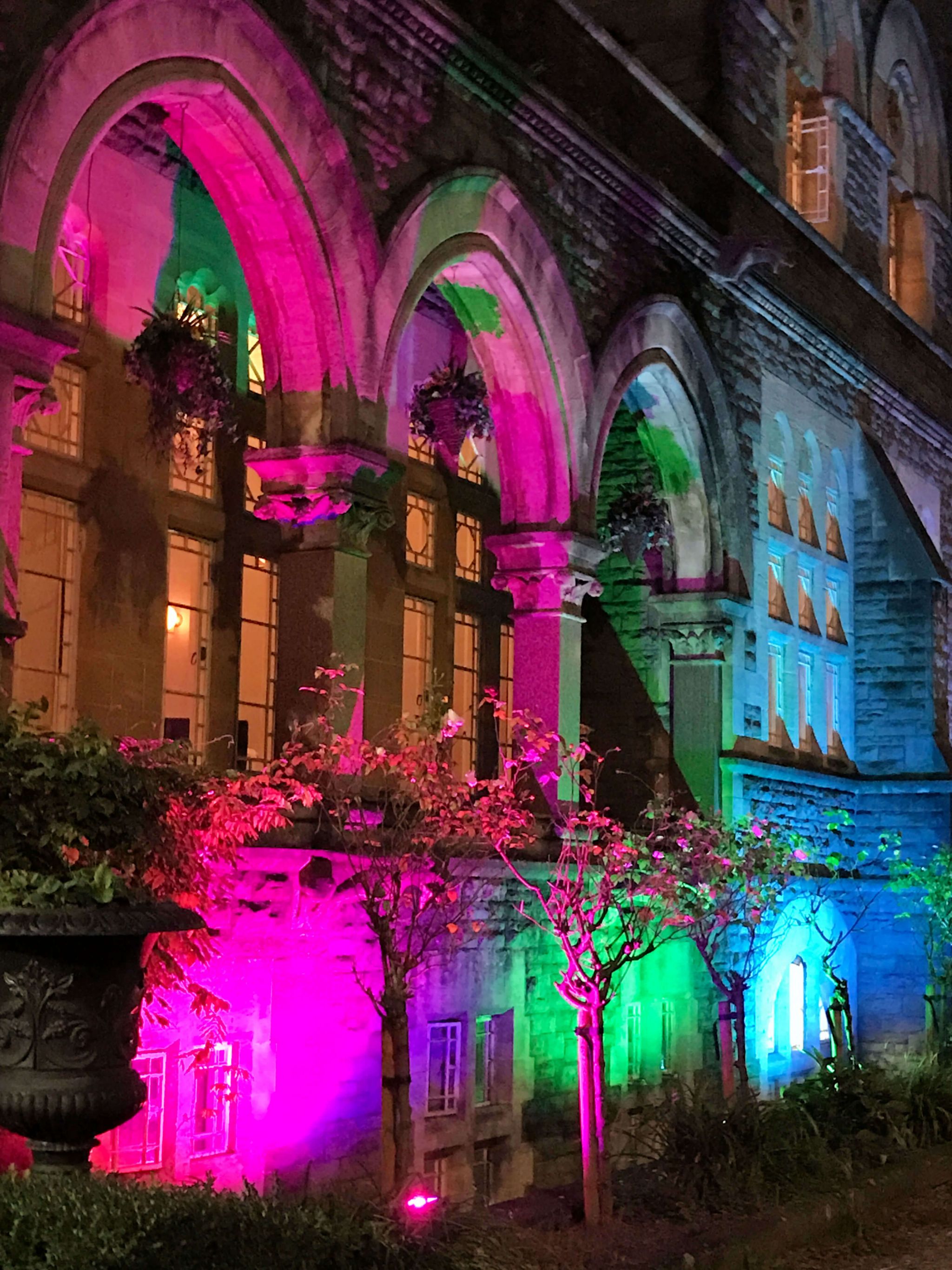 Park House, in which the restaurant is situated, is a somewhat gloomy gothic building that was designed by the architect William Burgess.  Completed in 1874, CADW considers the Grade 1 listed building to be “perhaps the most important 19th-century house in Wales”  It is certainly atmospheric and this adds all the more to the dining experience. 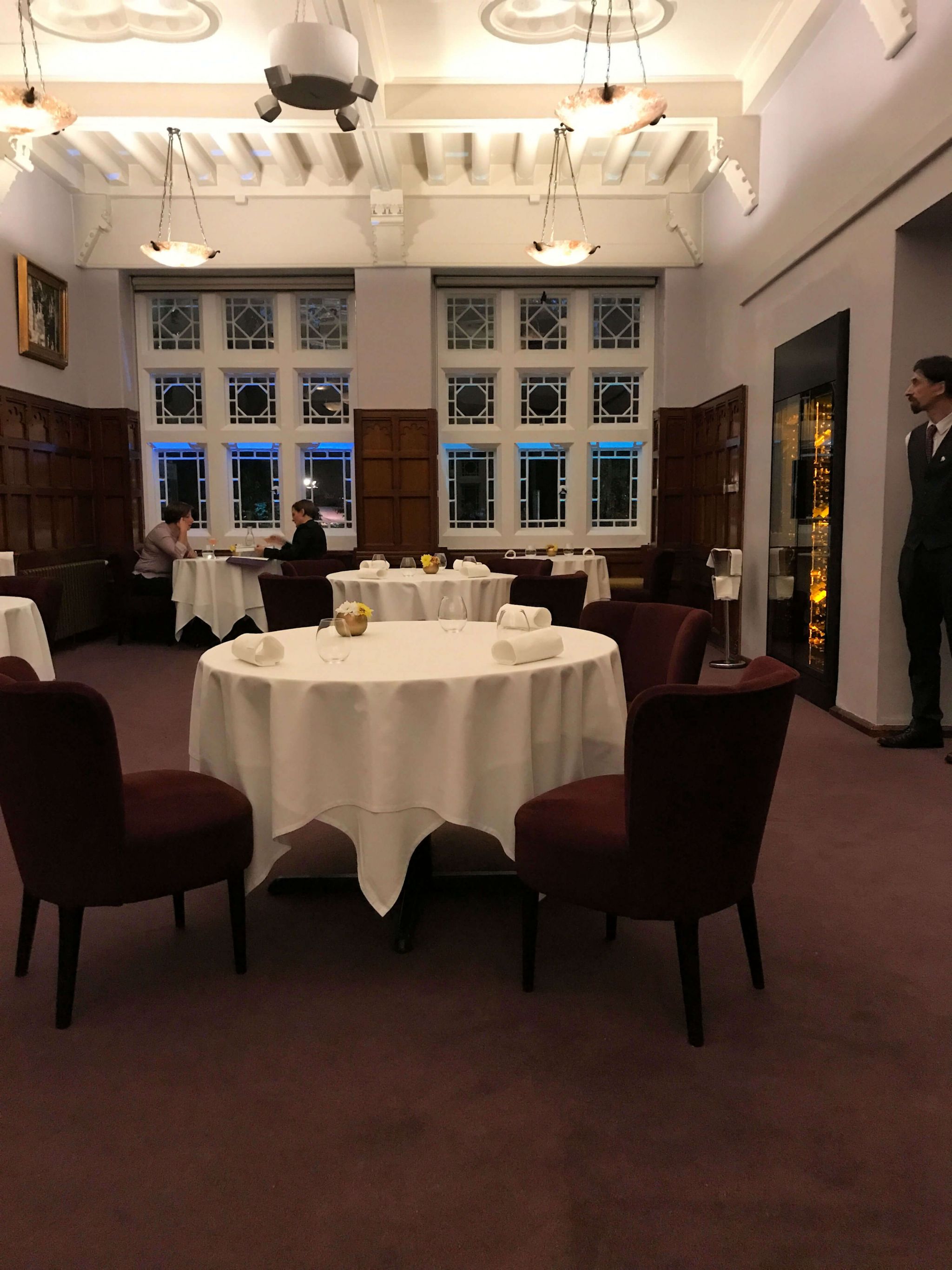 You have to ring the doorbell to enter and once inside are greeted by an enormous staircase and the kind of wooden panelled hush that is a blessing to my ears.  The staff are in black and white and are welcoming without being obtrusive.  The tables are clothed in starched and pristine white linen. 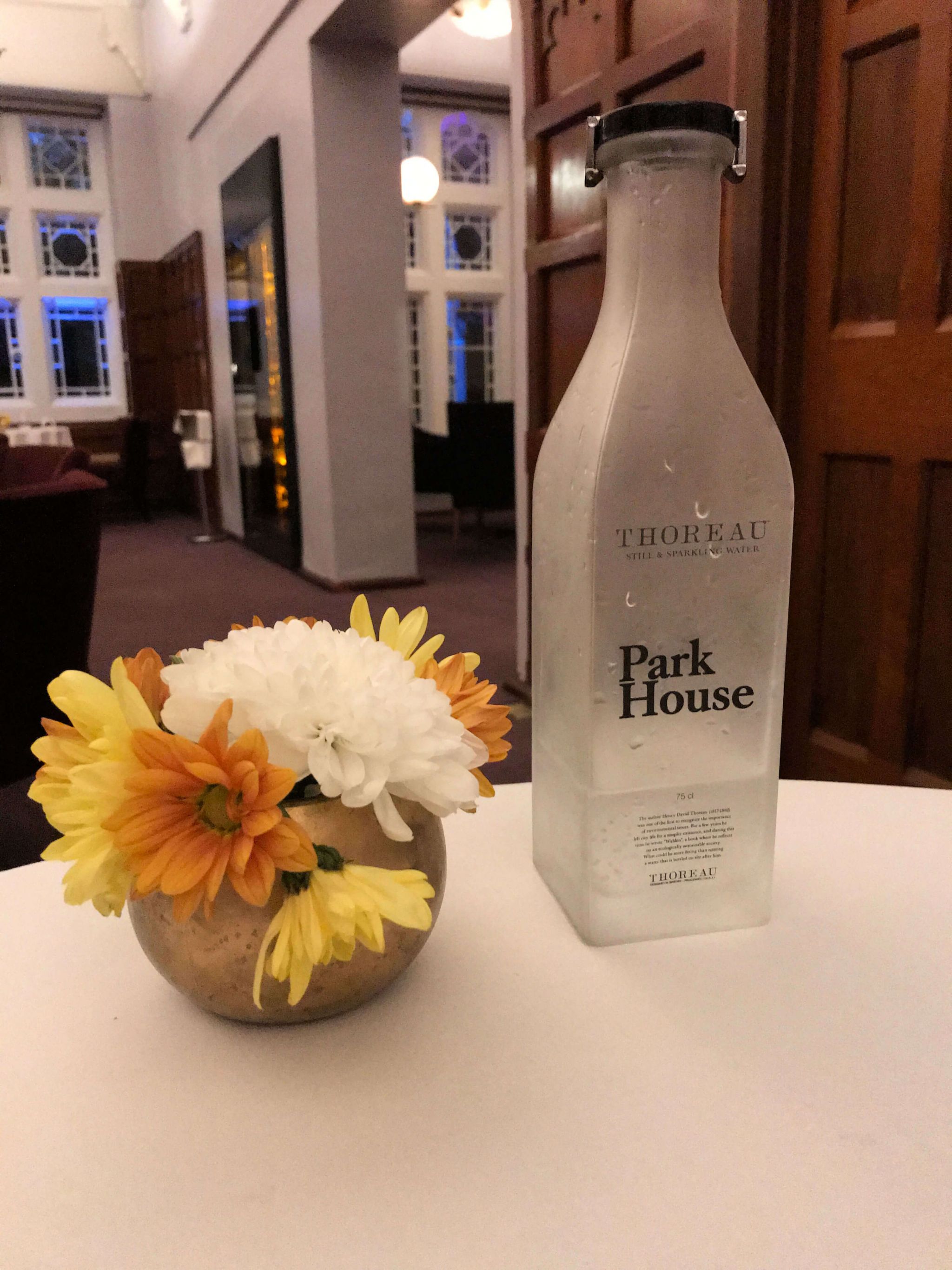 Diners are spaced well apart so that you cannot listen in to other people’s conversations (although, shamefully, I usually find this quite entertaining).  There is no pomp and ceremony, no ostentatious decor, just a simple flower ornament and napkins. 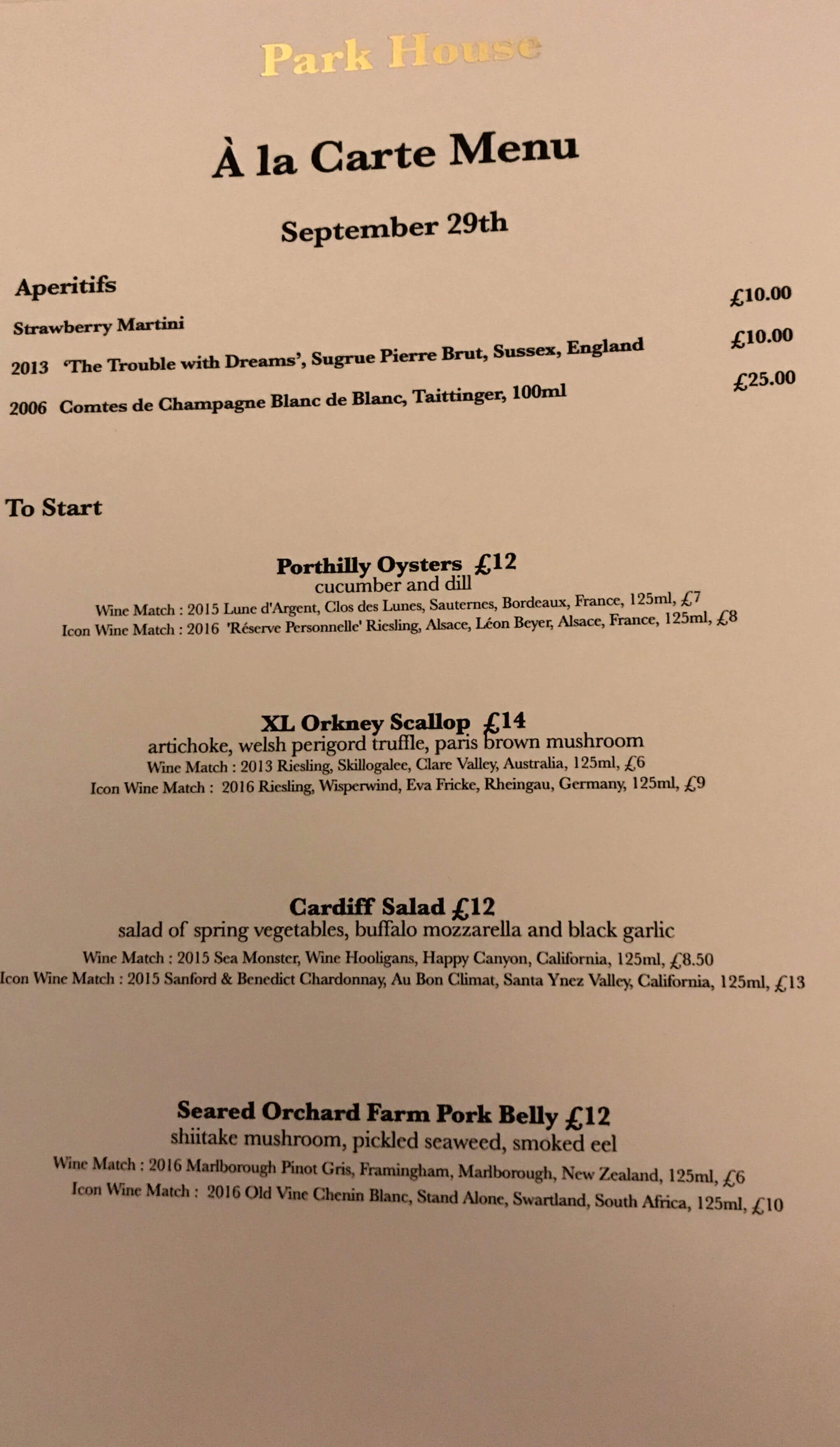 There is a taster menu but, the husband having returned from the States that day and fighting jet lag, we didn’t feel we could do it justice.  Instead, we chose from the A la Carte Menu and, as guests of the Park House, we were offered one or two extra treats to demonstrate the range and talent of Head Chef Matt Waldron and his team.

The Park House Restaurant Cardiff also offers taster menus for Vegetarians and Vegans, as well as 5 and 8-course taster menus and afternoon teas.

During his career in Wales and London, Waldron has worked under many influential chefs including Michelin starred Pierre Gagnaire, Helene Darroze at The Connaught and James Sommerin. He aims to present the best in Welsh produce and here in Wales, we are certainly spoilt for choice.

The Park House Restaurant Cardiff boasts an impressive wine list and I chose a 2016 Old Vine Zinfandel from the Bedrock Wine Company in Sonoma, California.  I could, however, have chosen from 100 wines! 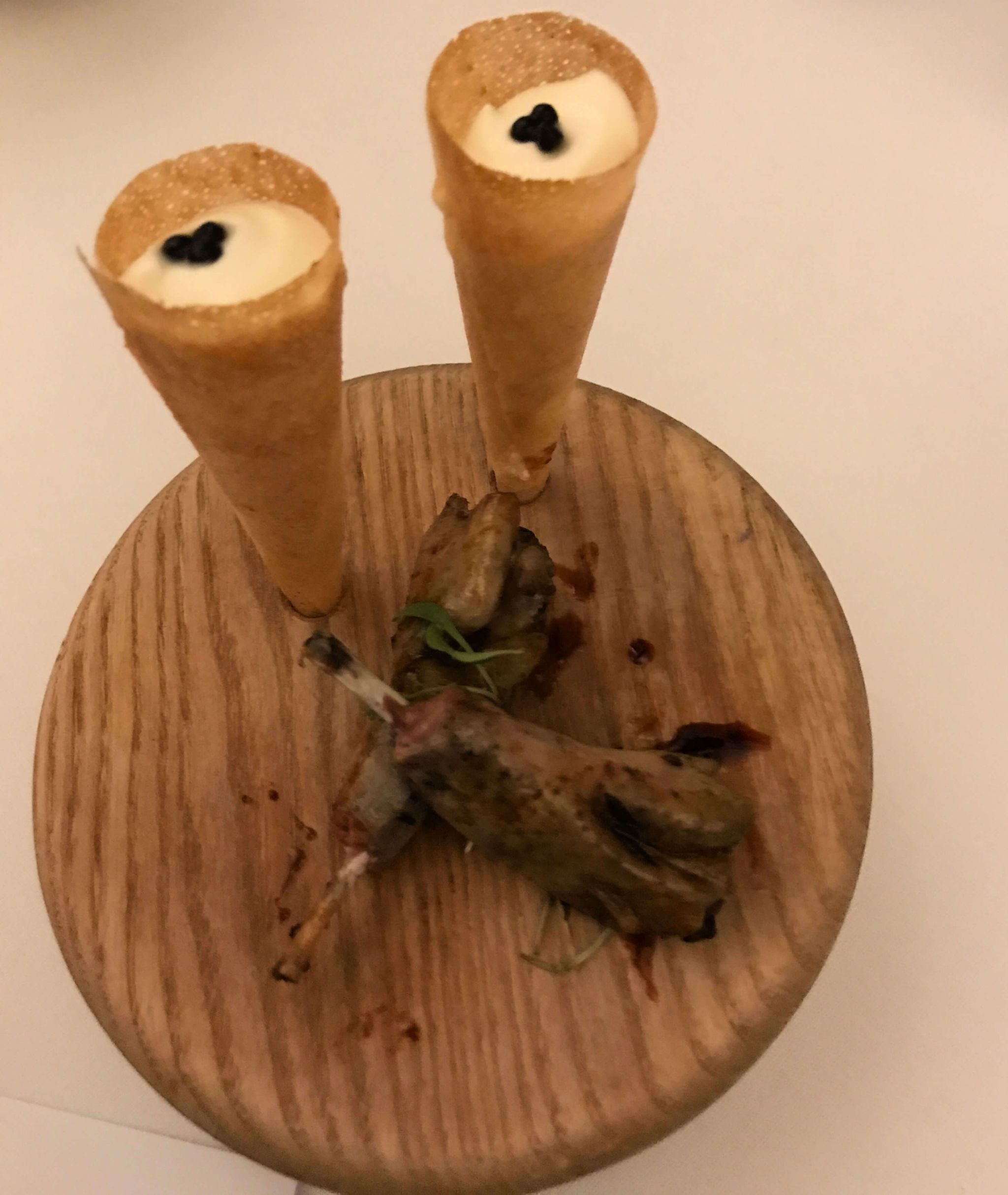 As an appetizer, we were presented with pigeon legs and a cone filled with a dill creme fraiche topped with caviar.  I’m afraid I couldn’t bring myself to try the pigeon but the husband assured me that the meat is very tasty.  The dill creme fraiche on the other hand just melted in the mouth. 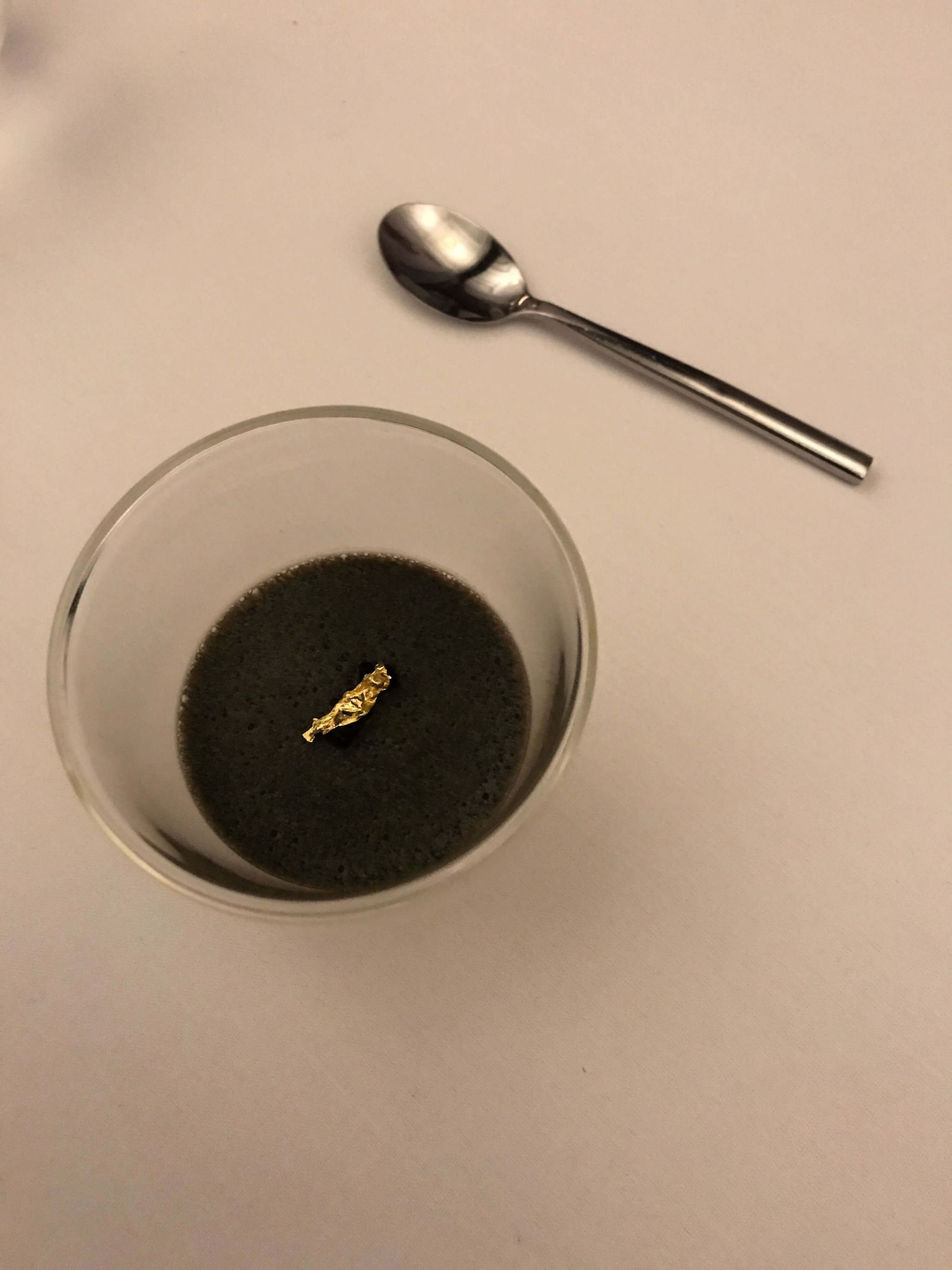 We were then treated to a cauliflower and oyster jelly topped with caviar.  This was a layered dish a light as air with the cauliflower giving a strong and slightly smoky taste without being overpowering. 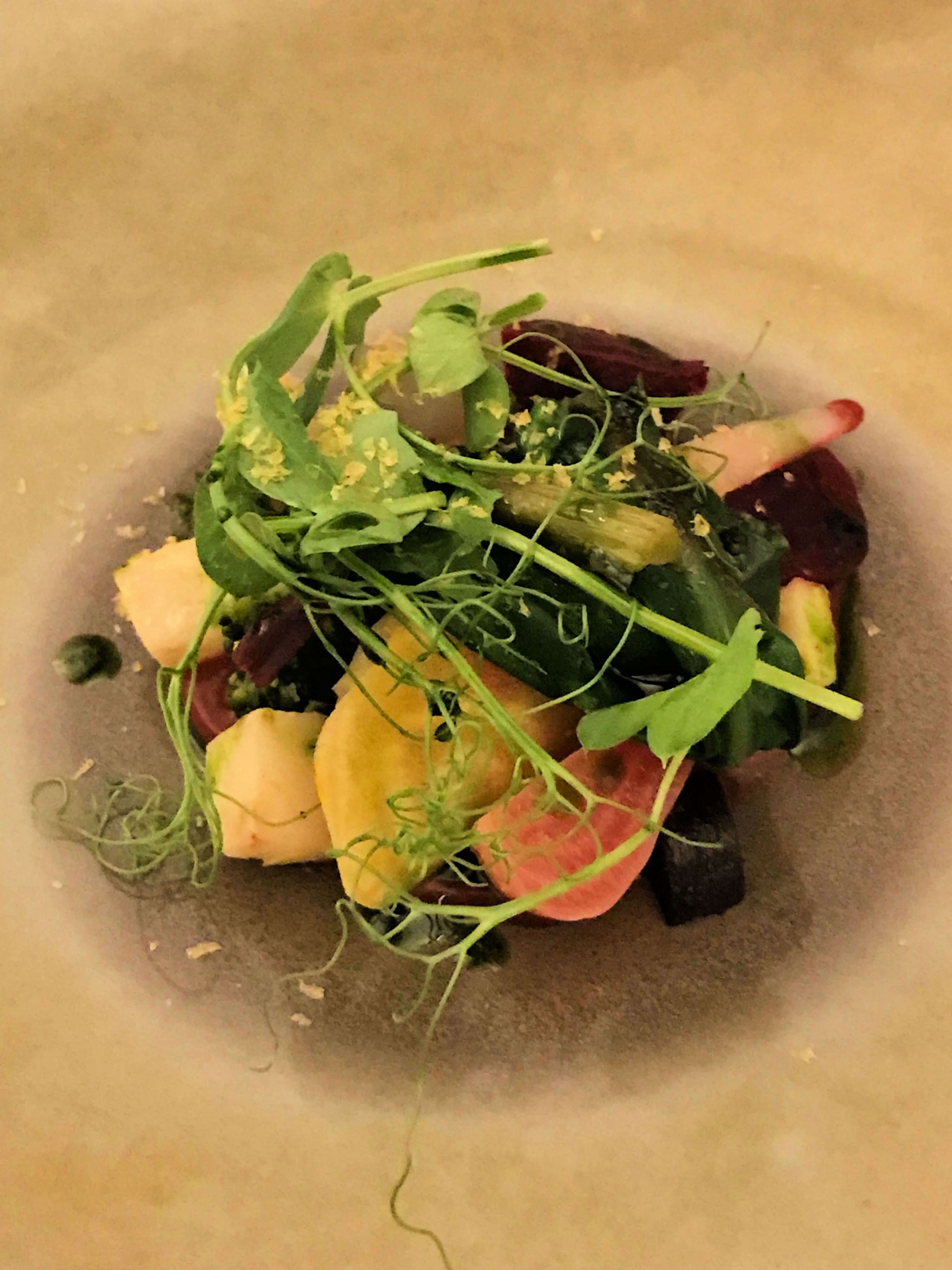 We chose the Cardiff Salad for our starter.  A rather unprepossessing name, this was nevertheless my idea of a salad – spring vegetables, buffalo mozzarella and black garlic – lots of different tastes and textures with a dressing that complemented perfectly.  The leaves were grown and freshly picked from nearby Bute Park. 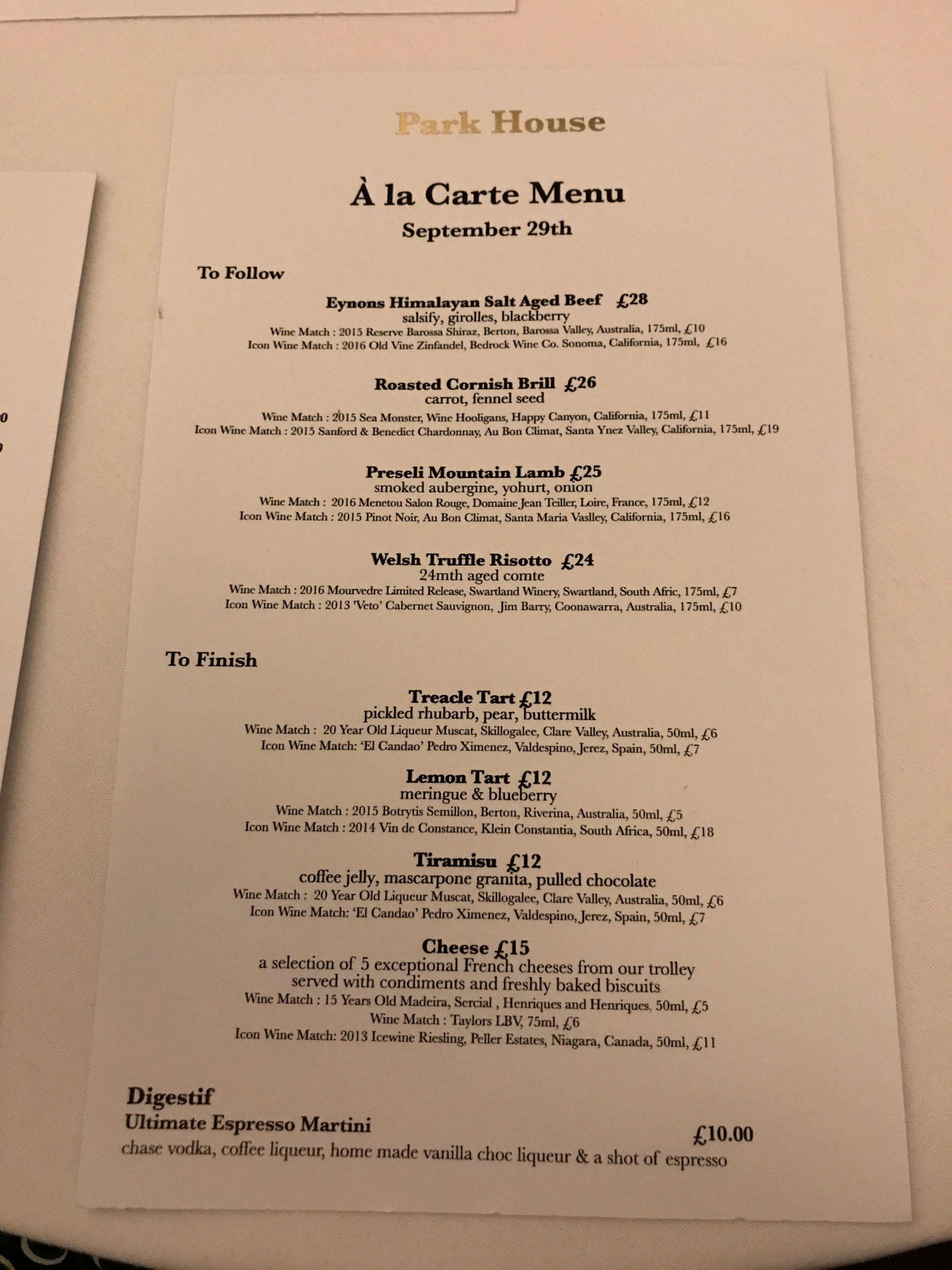 On to the main course and the husband chose the Welsh Truffle Risotto with black truffle oil. On first seeing the dish, I wondered if there would be enough variety in taste but Mat had no such qualms and enjoyed it immensely. 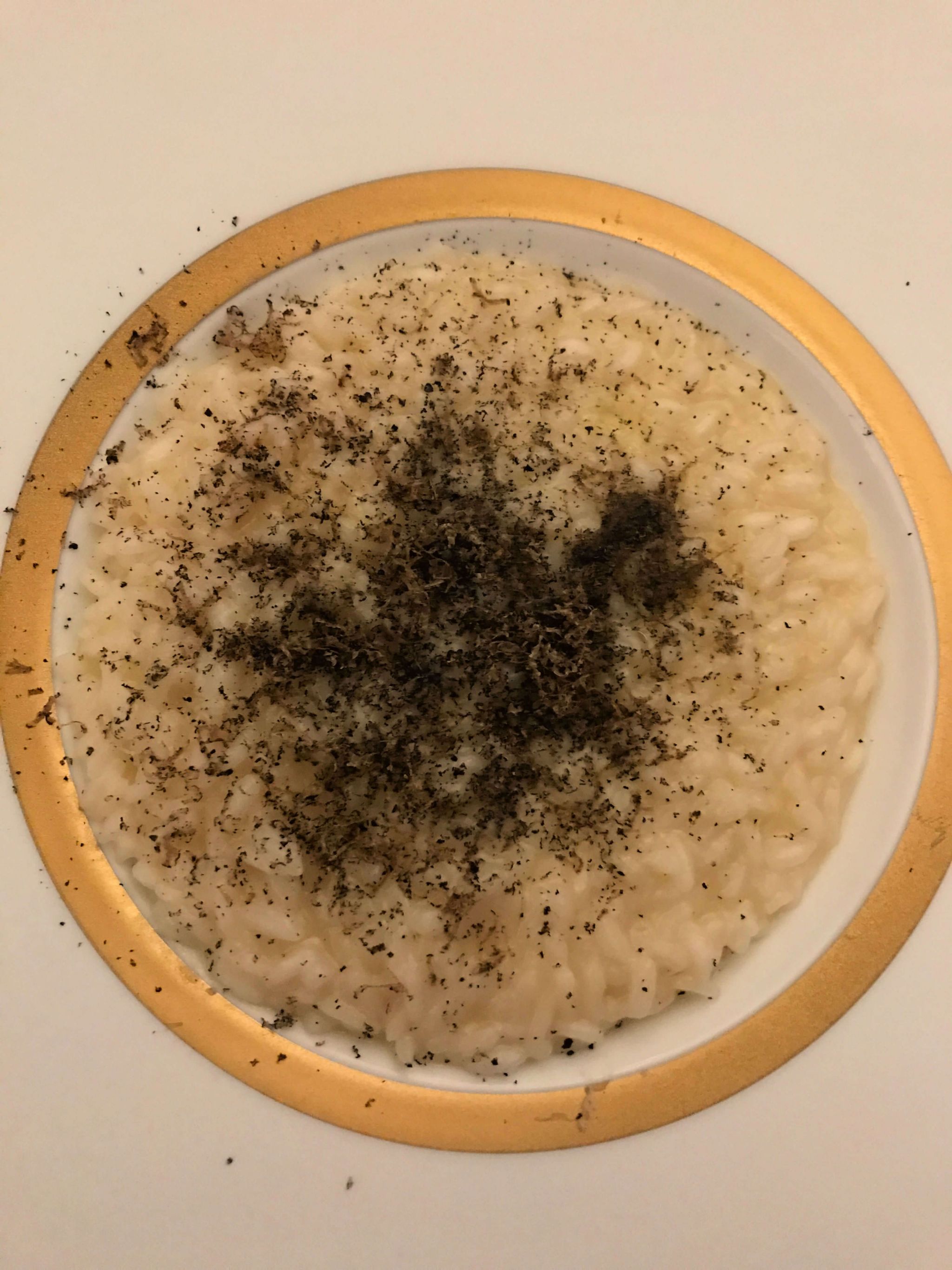 I had the Roasted Cornish Brill with carrot and fennel seed.  The brill is a fish that I rarely have but the dish was delicate and well balanced with the fennel complementing the subtle flavour. 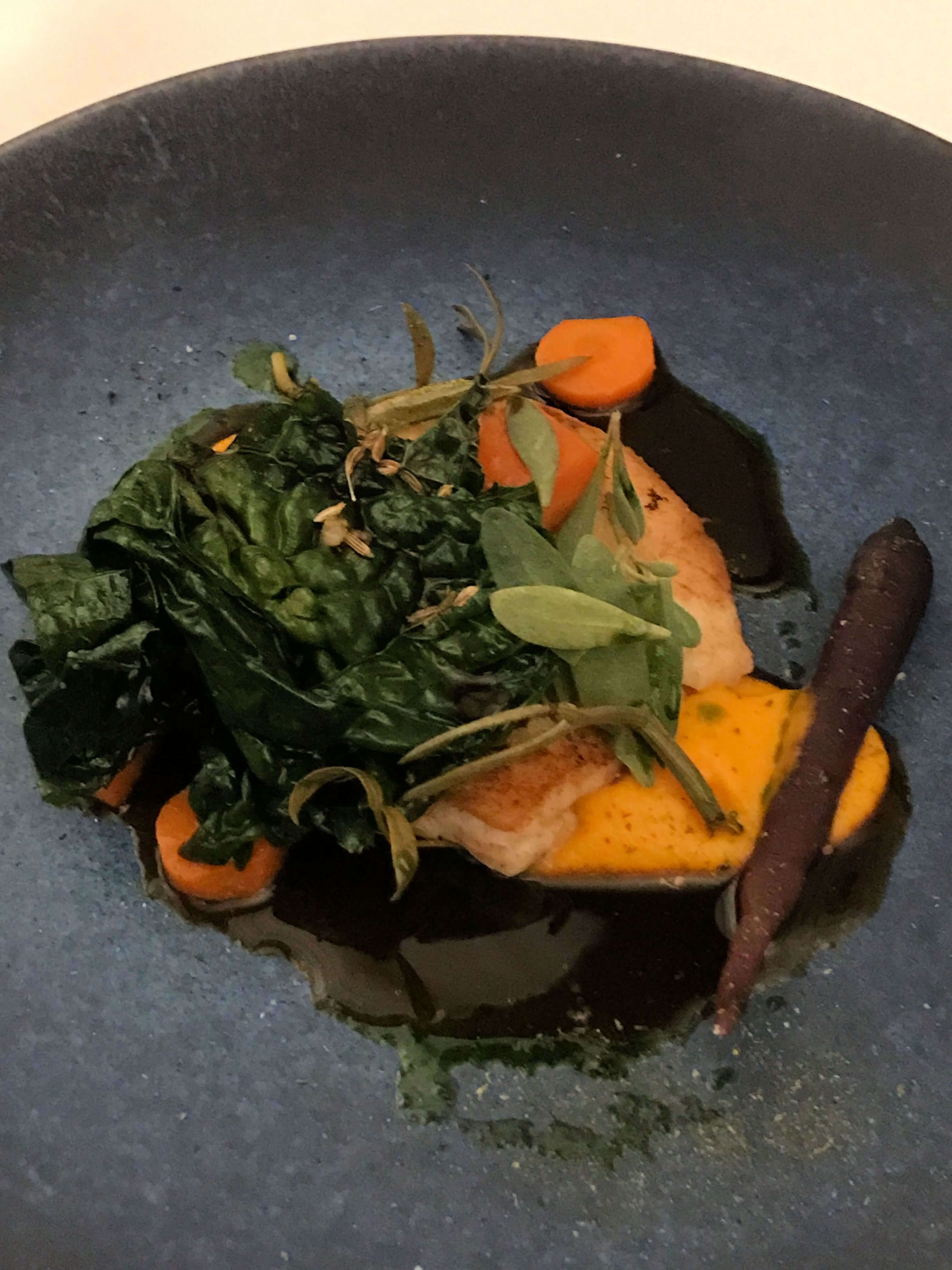 Another treat was whisked onto our table – a yoghurt pannacotta with beer jelly and lime. This was a real delight.  The contrast between the smooth yoghurt and the beer jelly and lime had a real zing and was a great palate cleanser. 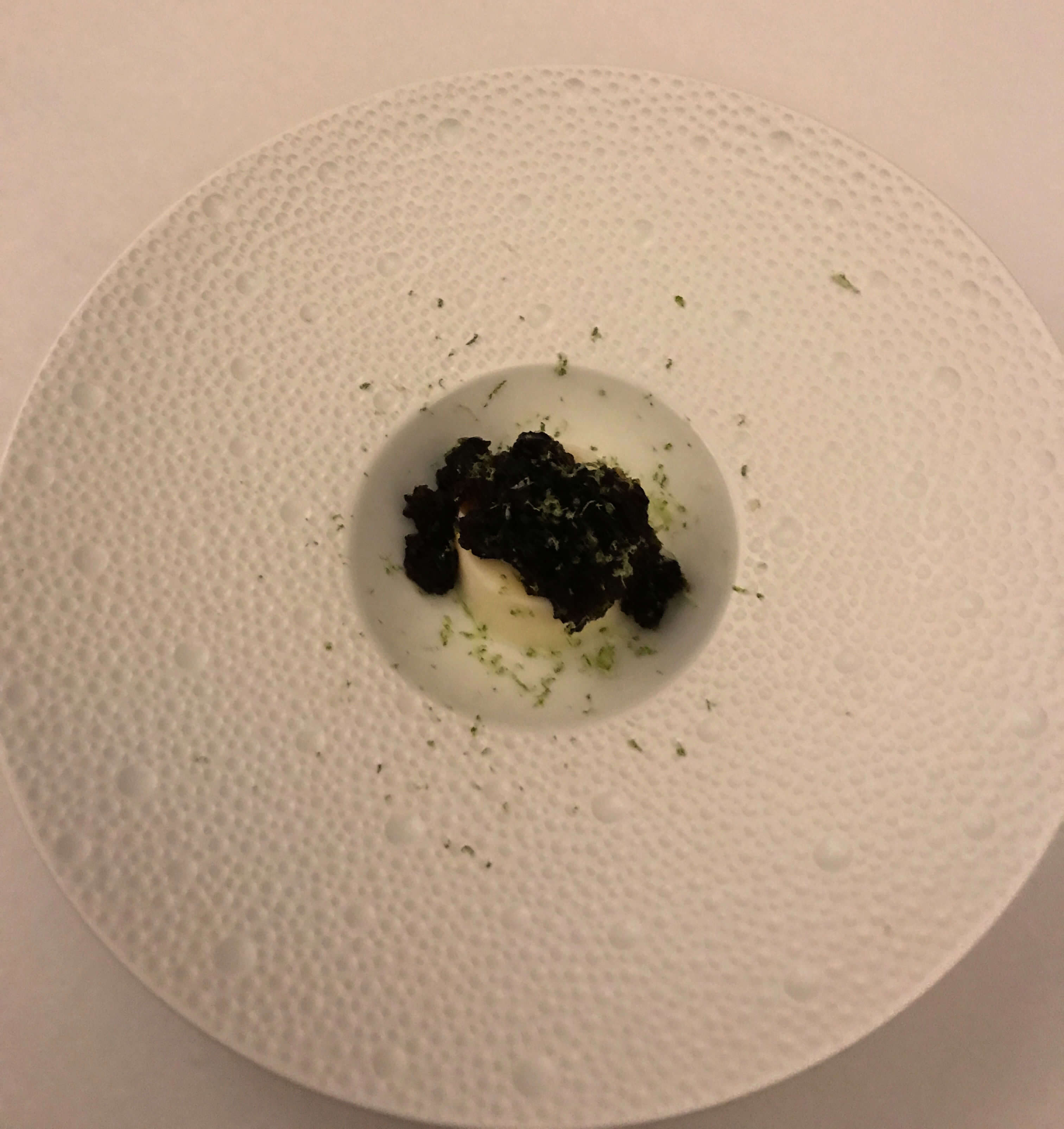 Our desserts were equally as memorable.  The husband chose treacle tart which came deconstructed style but with a great depth of taste and a really concentrated treacle taste. 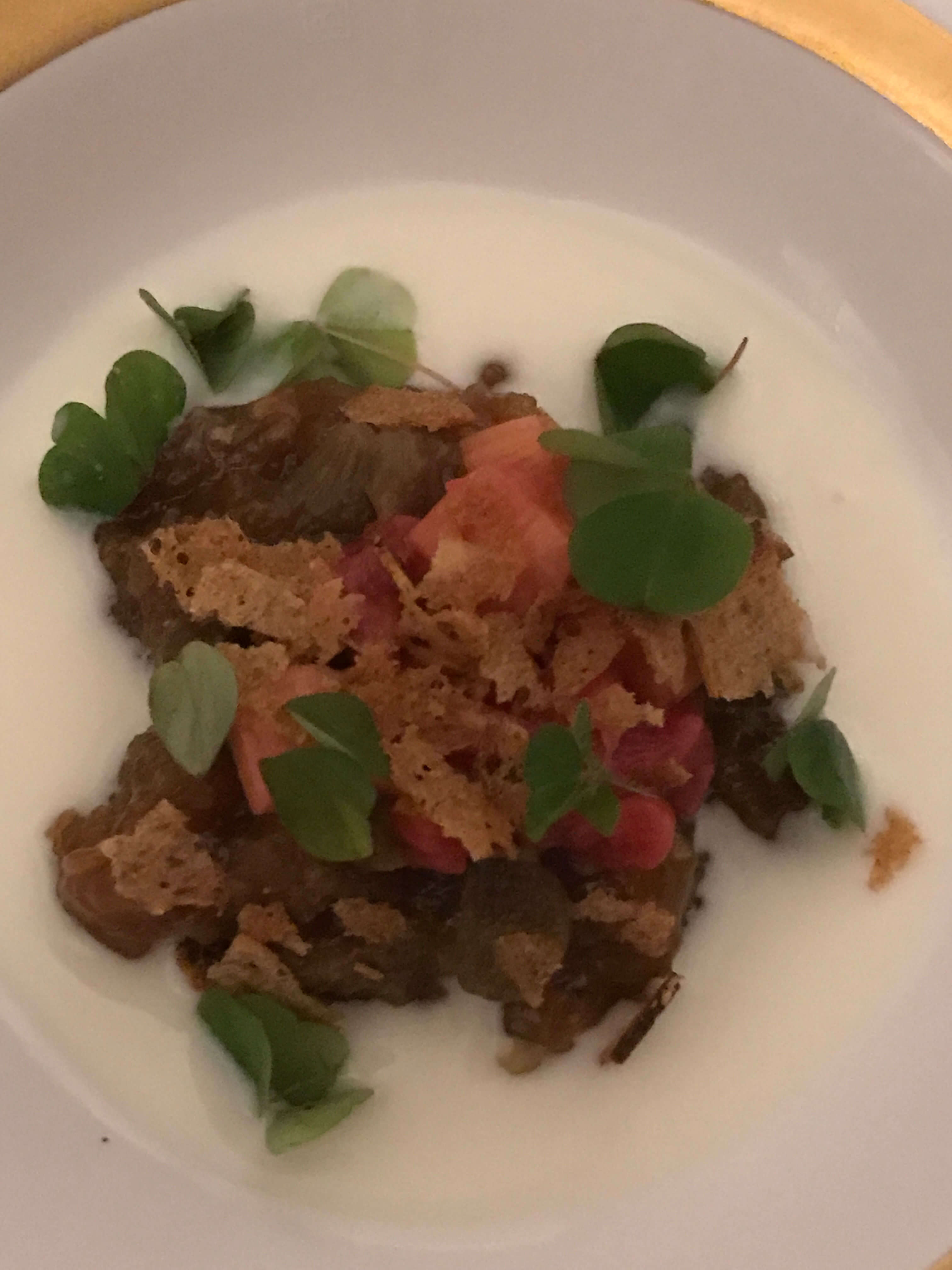 My lemon tart was similarly presented but had a real kick of citrus that I have never found in the many, many (!) lemon tarts I’ve tried over the years, including one particularly memorable one in Amiens. 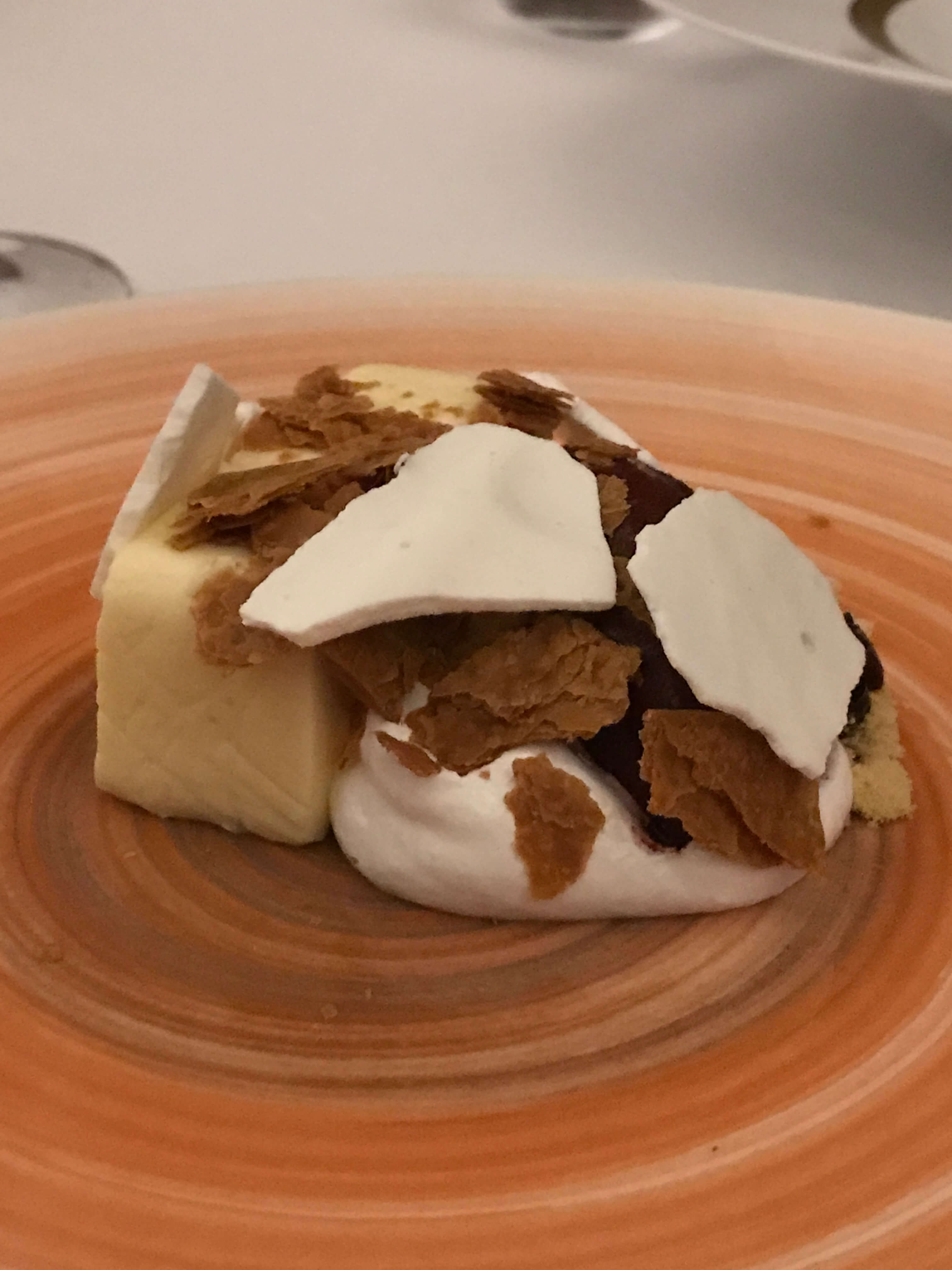 Coffee was served with home-made petits fours, each one a mini explosion of taste.

During our meal I found myself wondering about the kind of people who would most enjoy the Parkhouse.  It is an ideal place for quiet family celebrations but most of all it is a place for diners who want to enjoy local produce in taste combinations they may never have previously considered.  This is not pretentious dining.  There’s no Heston-style madcap bubbling desserts.  Not a sound was heard from the kitchen.

Instead, we enjoyed a meal in surroundings which allowed us to concentrate on food and talk about what we were actually eating.

And that makes a refreshing change.

For more information visit www.parkhouserestaurant.co.uk or telephone 029 2105 0662. The restaurant is available for private dining & hire and you can also book online here.

*We were invited to dine as guests of Park House Restaurant Cardiff.  All opinions are our own.