When I was young, we’d gather around the TV every Sunday night and watch Ski Sunday.  I was always fascinated by the bravery of those attempting the ski jump – remember Eddie The Eagle?  Needless to say, I’m not brave enough to attempt it but this version I might.  It’s Drumond Park’s Super Ski Jump tabletop game. 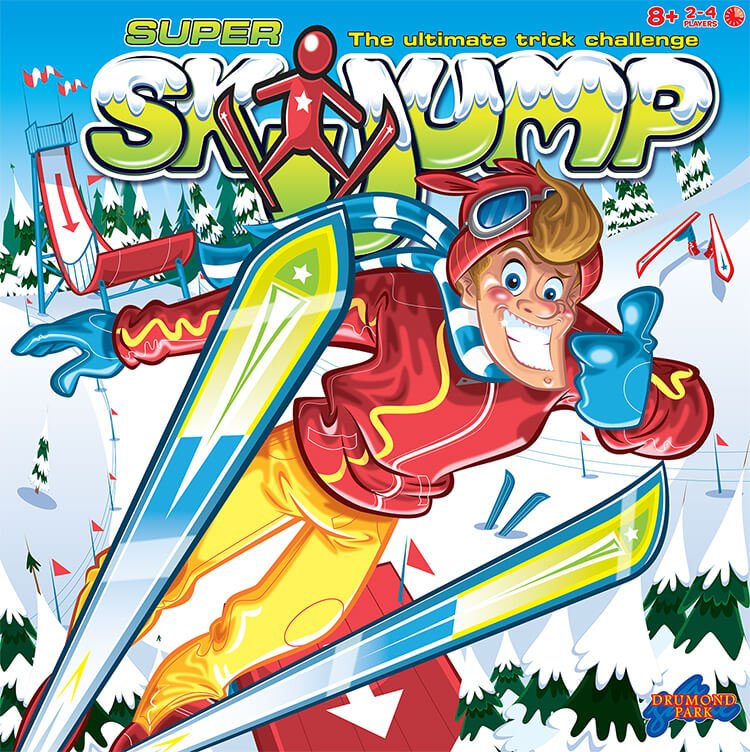 Super Ski Jump is a game for 2-4 players over 3 thrilling rounds – and the aim of the game is to send your skiing character flying down the sizeable ski ramp to score the most points by doing tricks and nailing the perfect landing! 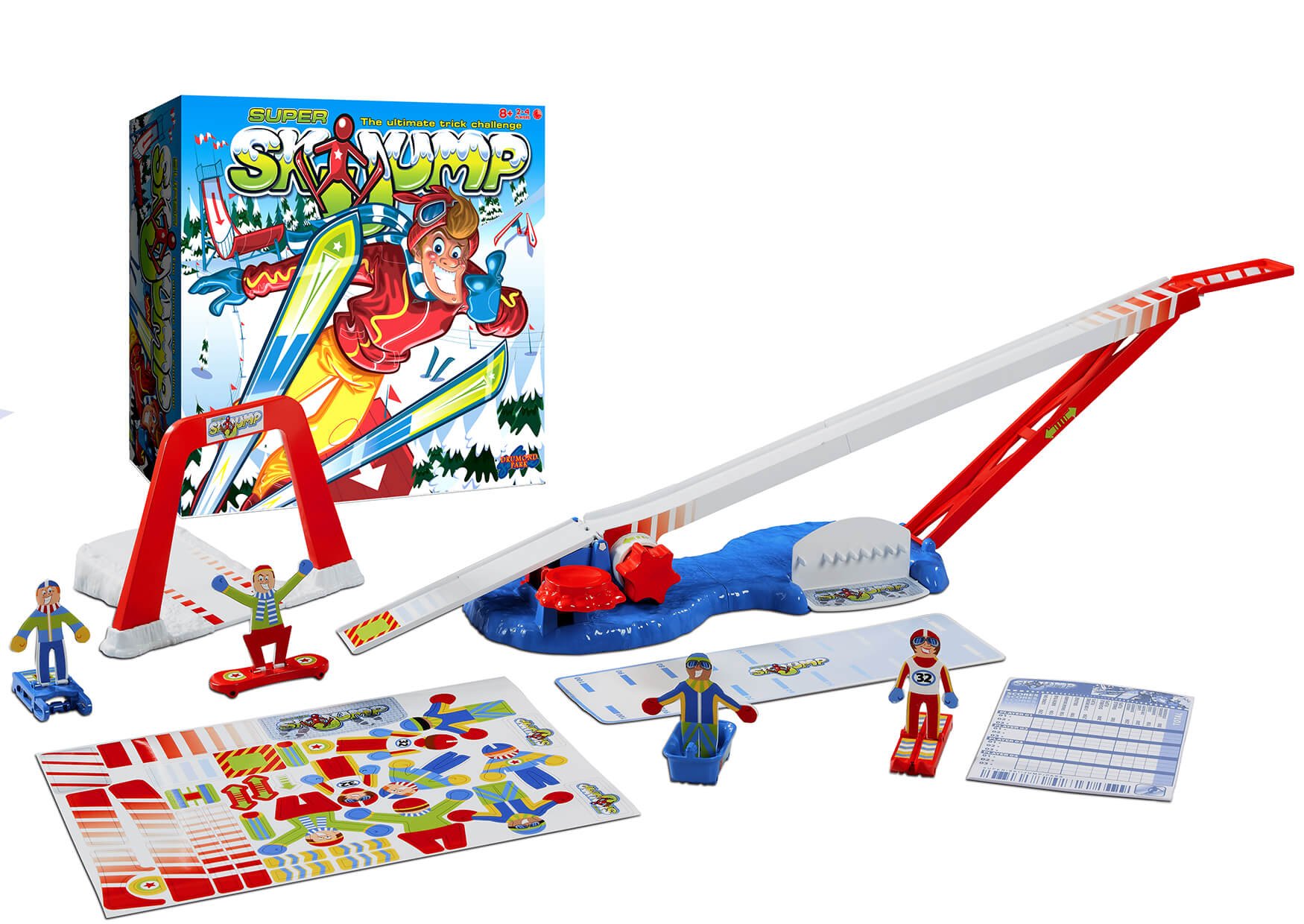 Players take it in turns to jump once in each round, choosing which of the four characters and the playing piece (Sledge, Bath Tub, Snowboard, Skis) they would like to use. Once you’ve assembled and set up the ski jump ramp, you’re ready to go – although if you’re a competitive soul, you’ll want to have a practice session first.

The youngest player goes first – placing his or her character at the top of the ramp, and adjusting the height of the ski ramp to one of the three different levels.  To start your jump, turn the wheel to send your character whizzing down the ramp.  Now for the skilful part … press down on the lever to raise the lower part of the ramp and send your character off into the air!

Make sure you watch your jump closely to count the number of flips and the style of landing.  When you’ve finished your jump, count the points based on which playing piece you chose, how many flips you managed and how you landed.  Mark your points on the scorecard and it’s on to the next player. 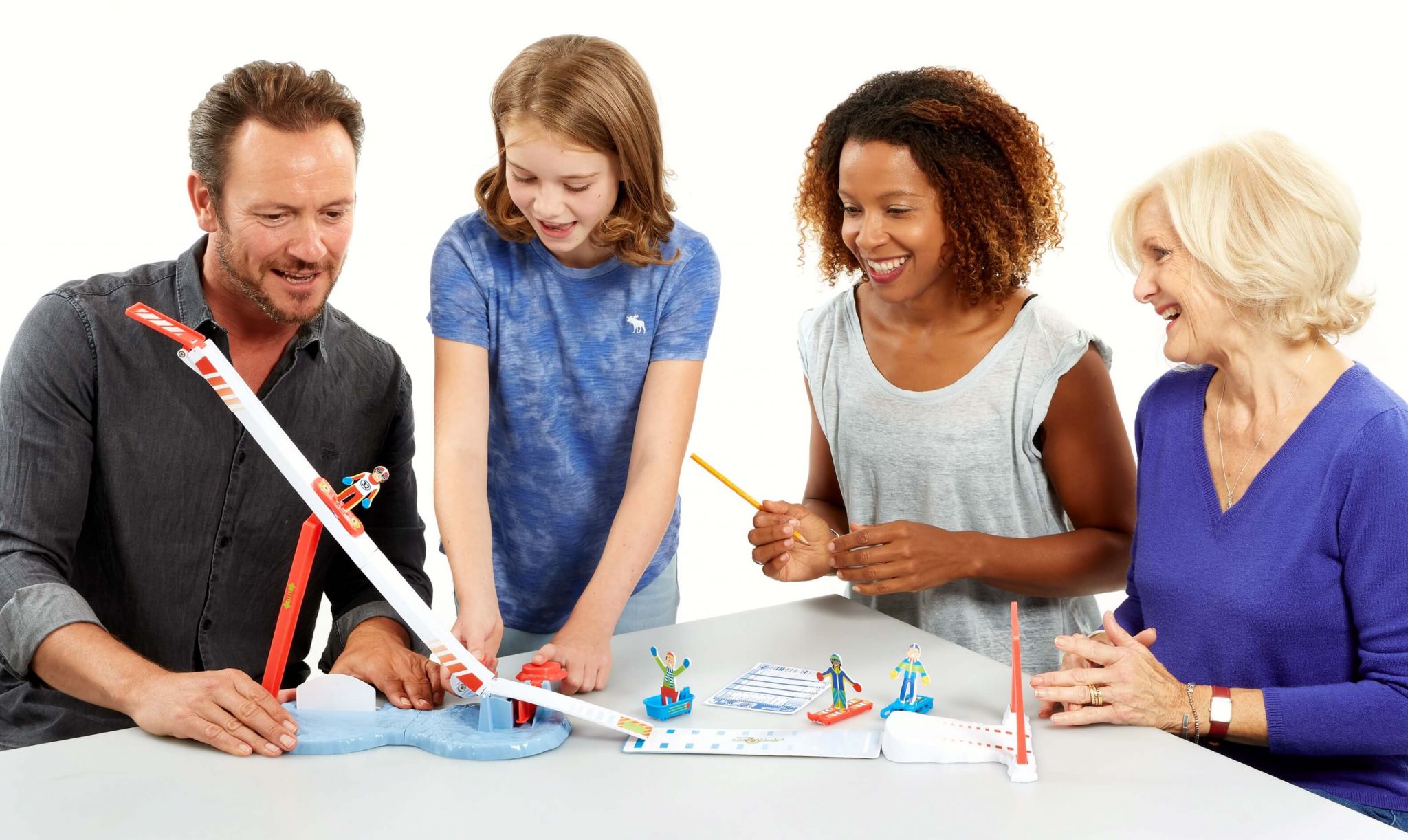 Repeat the process for all players over the three rounds to complete the game.  At the end of the final round, the players are ranked based on their single highest scoring jump, and of course, the winner is the player with the highest score!

If any two players have the same highest score, they must enter into a nail-biting ‘Jump Off’ competition against each other – with a single jump to determine who is the overall Champion this time around!

There are some nifty hints and tips included in the instruction sheet too. You could even capture your amazing acrobatic ski jump feats on your phone (maybe even in slo-mo!) to share on social media.

Super Ski Jump is the ultimate trick challenge that’s set to have everyone hitting the slopes this Autumn – jumping, flipping and landing as skillfully as they can – no travel involved!

Perfecting your technique and gaining points is fabulous, addictive fun – and guaranteed to keep everyone entertained for hours!