We have long been fans of Aardman’s Wallace & Gromit.  A new animation from them is an event not to be missed, particularly at Christmas. However, something new has hit the stage this summer.  Wallace & Gromit have gone on tour with a new show – Wallace & Gromit’s Musical Marvels – to celebrate 30 cracking years of fun, friendship and dealing with dastardly penguins. 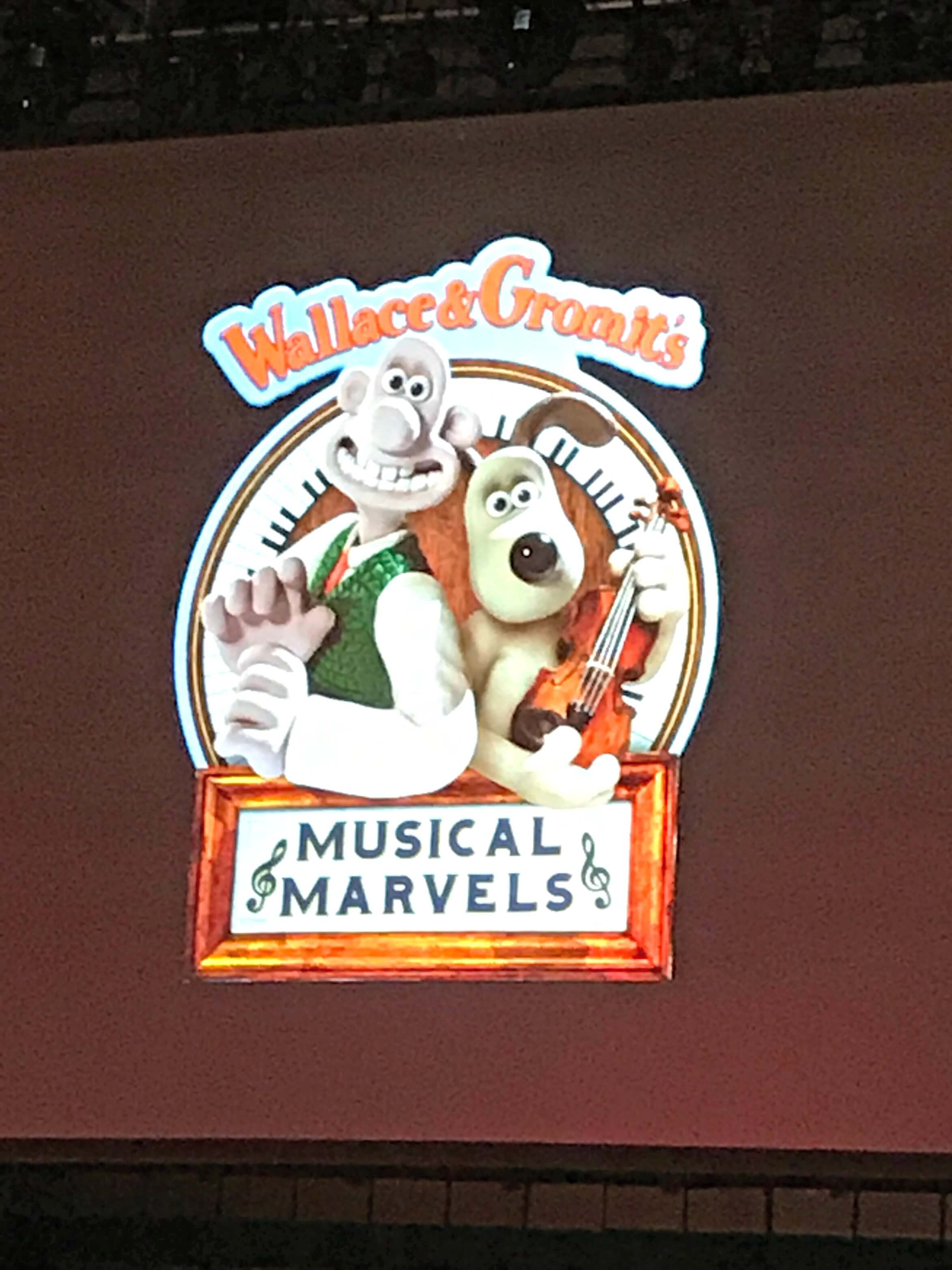 In truth, we weren’t sure what to expect but the Carrot Productions show is a clever mix of live orchestral music, animation and video, all interwoven to create an interesting theatrical event which is unlike anything we’ve seen before as a family. 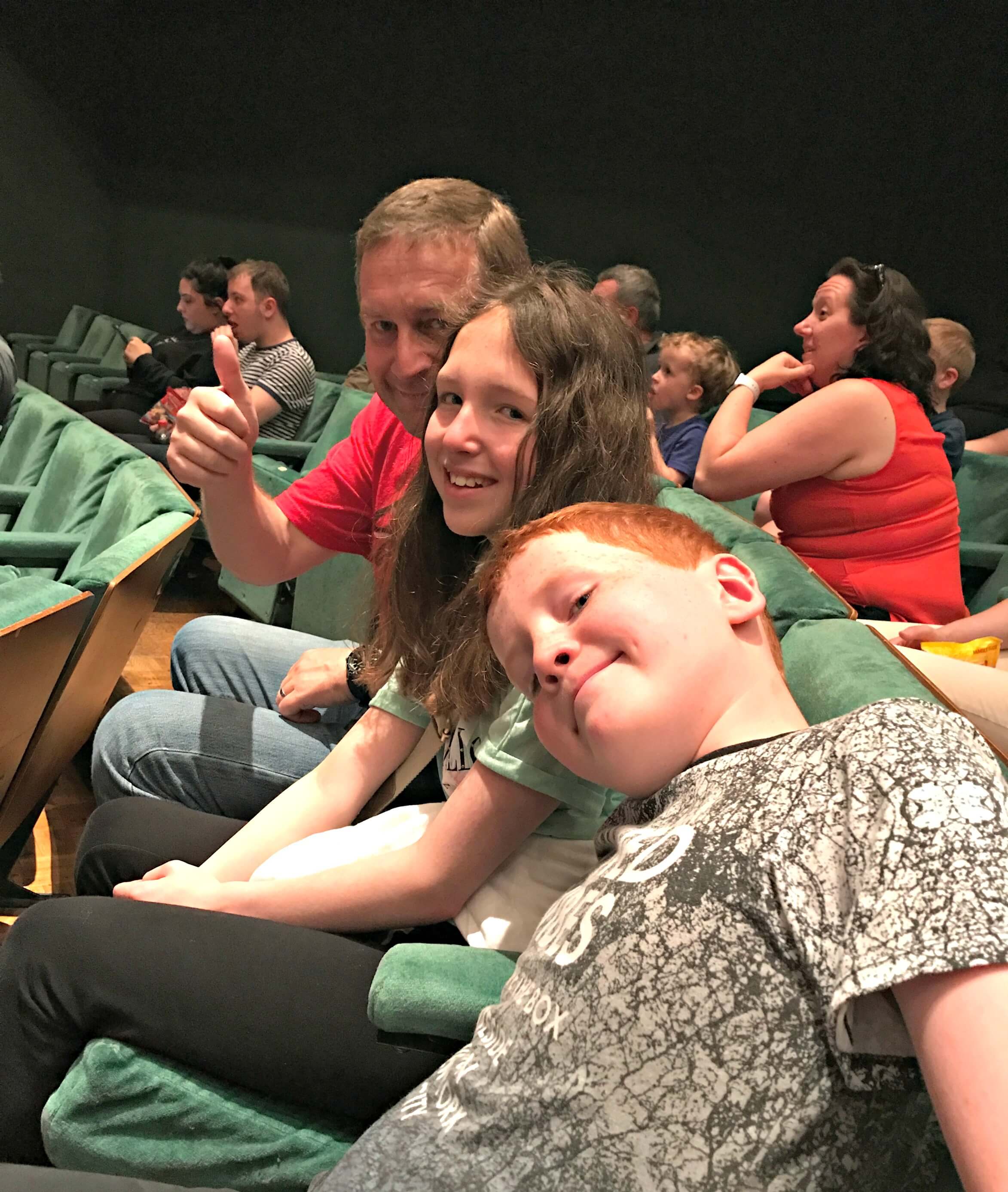 The first half of the show features classics like the overture from the Marriage of Figaro mixed with Queen’s Bohemian Rhapsody and a medley of music from all the chase scenes in the Wallace & Gromit animations.

In between the musical numbers, there is plenty of input with Wallace and Gromit who are helping out backstage with the usual chaos put to rights by the inventor’s faithful pooch.  They appear via big screen to talk to the audience and direct the show. 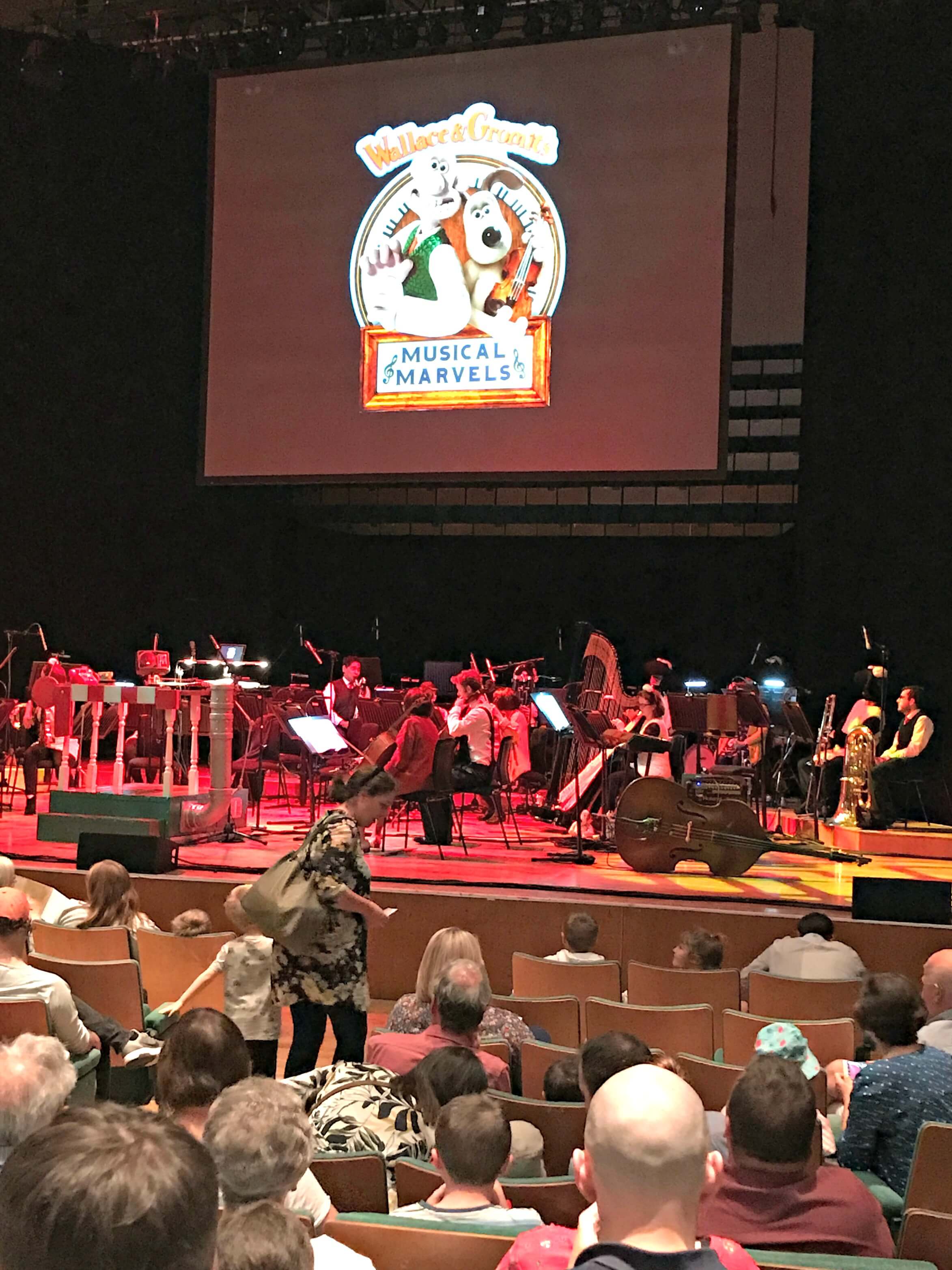 The Wallace & Gromit theme tune was created by Julian Nott who was a fellow student with Nick Park at the National Film and Television School in the 1980s.  Did you know that A Grand Day Out was actually Nick Park’s graduation film?

Nick wanted something ‘brass band like’ for the theme, but there was no brass band available and Julian completed the famous theme the night before the music session with just a few orchestral brass players.

The master of ceremonies, Matthew Sharp, was funny, engaging and a great cello player.  In fact, he is an internationally recognised classical artist who has performed at major venues and festivals worldwide as solo cellist, baritone, actor and director. 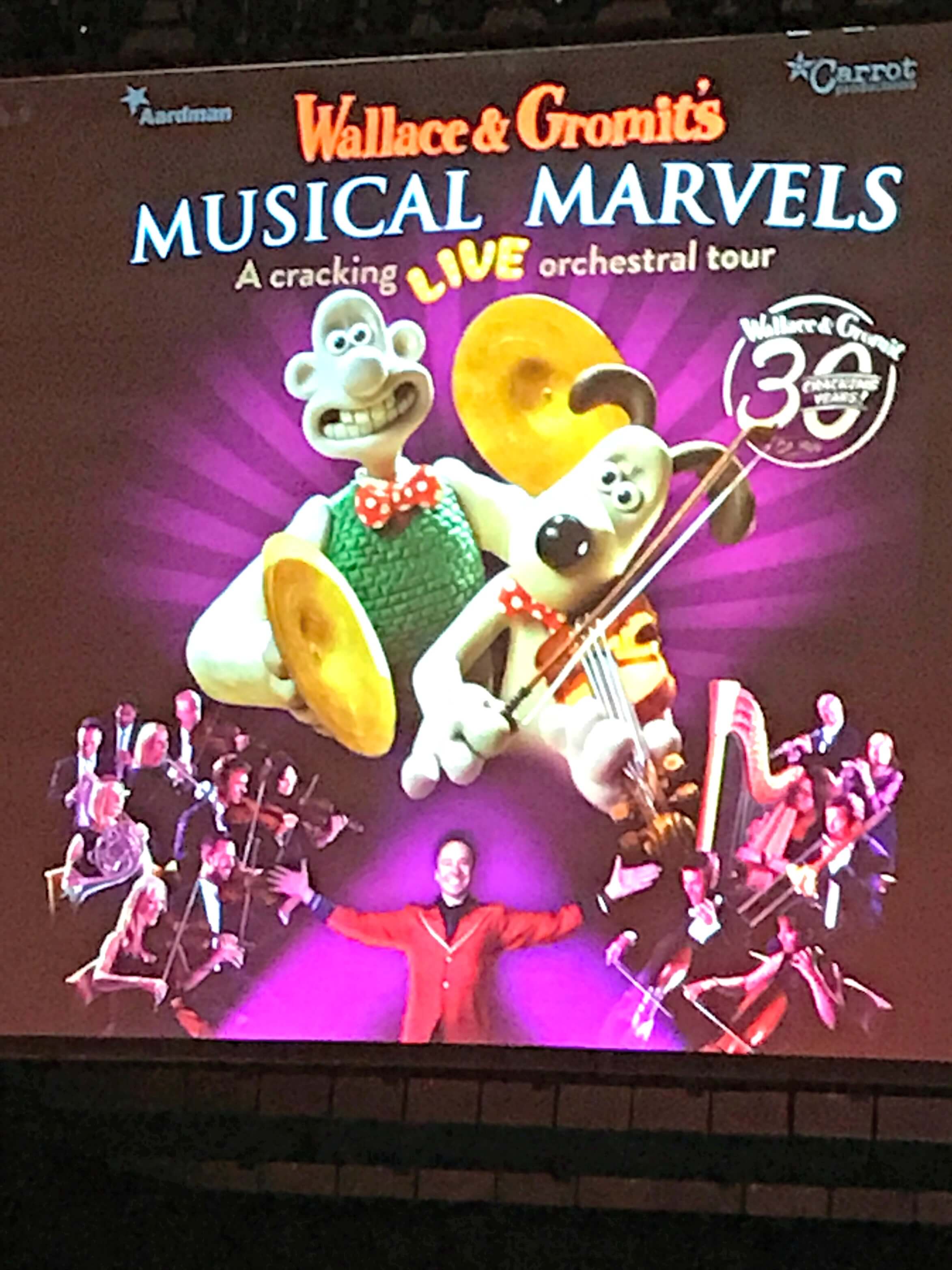 We were treated to a lovely piece of music penned by Wallace himself – My Concerto In Ee Lad.  Or was it?  I won’t spoil it for you, suffice it to say that the concerto, for violin and cello was an uplifting piece of work by composer Daniel Whibley.

The Picture House Orchestra, which comprises some of the country’s top musician drawn from the Halle, BBC Philharmonic, BBC Concert and LSO, were excellent and entered fully into the spirit of the show.  Never before have I seen violinists disguised as pieces of cheese or sheep!

Conductor Steven Magee conducts and coaches many UK orchestras and ensembles and is himself a member of the BBC Symphony Orchestra in his role as Principal Contrabassoon.

The second half of the show was a screening of The Wrong Trousers with the orchestra playing the score making it a much more immersive experience than sitting at home on the sofa. 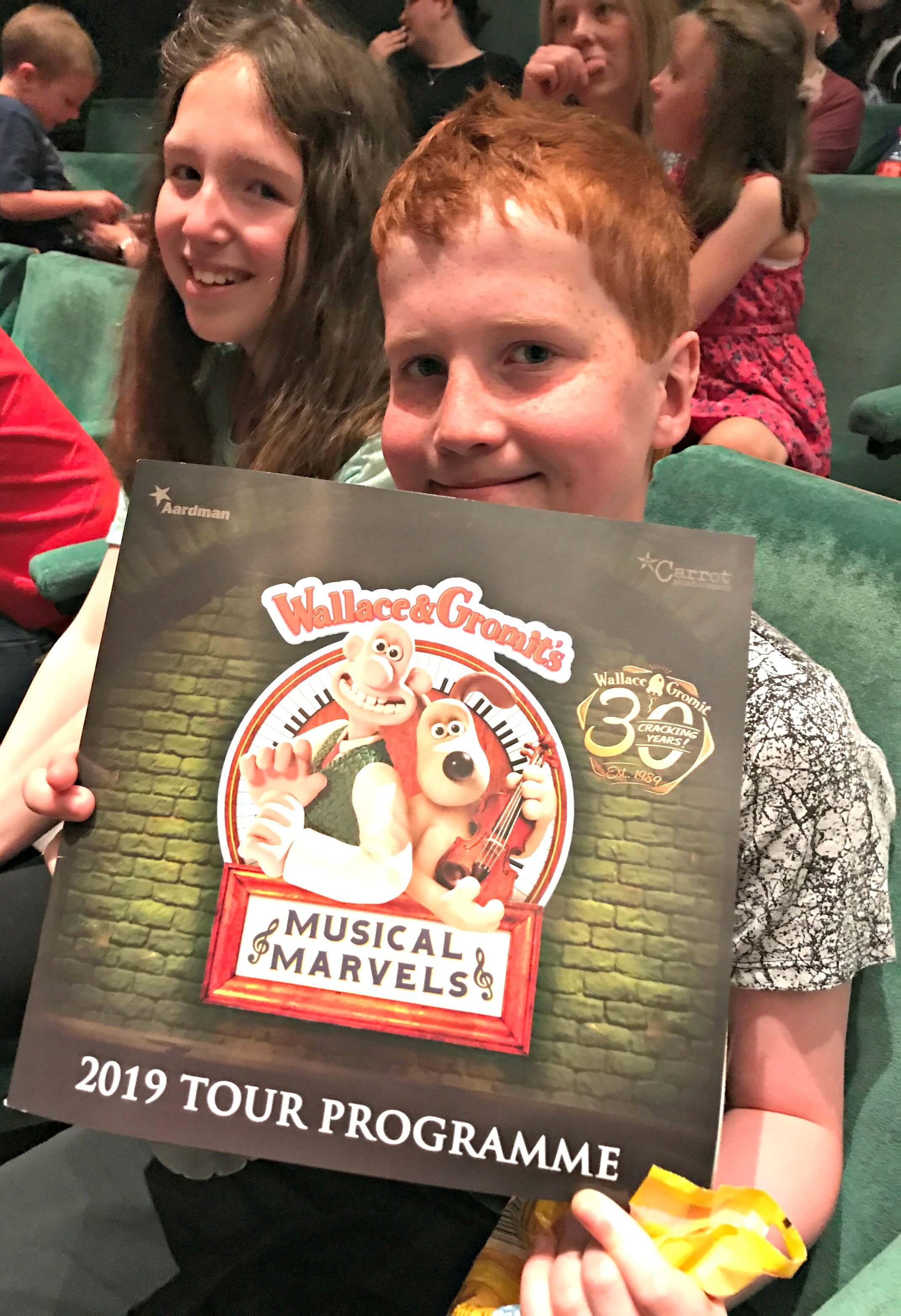 The show was just long enough to keep little ones’ attention and, as with all of Aardman’s work, there are plenty of in-jokes to amuse the adults too.

There is nothing like experiencing live orchestral music and Matthew made sure that the kids were introduced to the various instruments and their players.  Caitlin said (rather ominously I thought) that she now fancies playing the violin.

Well, there’s a strong musical tradition in our family. Dad is a piano teacher and cellist.  My sister Sara went to Dartington Music College to study piano and I play piano (a bit) by ear. Shows like this are a great way to introduce your children to the joys of live classical music to help them decide for themselves whether they enjoy it as much as their parents do.

We caught Wallace & Gromit’s Musical Marvels at Cardiff’s St. David’s Hall but you can see the show at various venues around the UK until 9th June.

Look out for The Snowman  Tour 2019 around the UK this Christmas too.

*We were gifted a family ticket for the purpose of this review.  All opinions are our own.