It’s Pancake Day on Tuesday 25 February this year and, with some nostalgia, here’s Caitlin helping me to make pancakes a fair few years ago.  We still use the recipe though.  Here’s what happened back then …..

Existing readers of this blog will be familiar with my undoubted culinary prowess and remember the ‘Potato of Doom’ incident. Despite this, and racked with unprecedented levels of maternal stress since mums everywhere appear to be flipping pancakes, a couple of years ago I caved in, embraced Delia and learned how to make pancakes with the help of Caitlin. 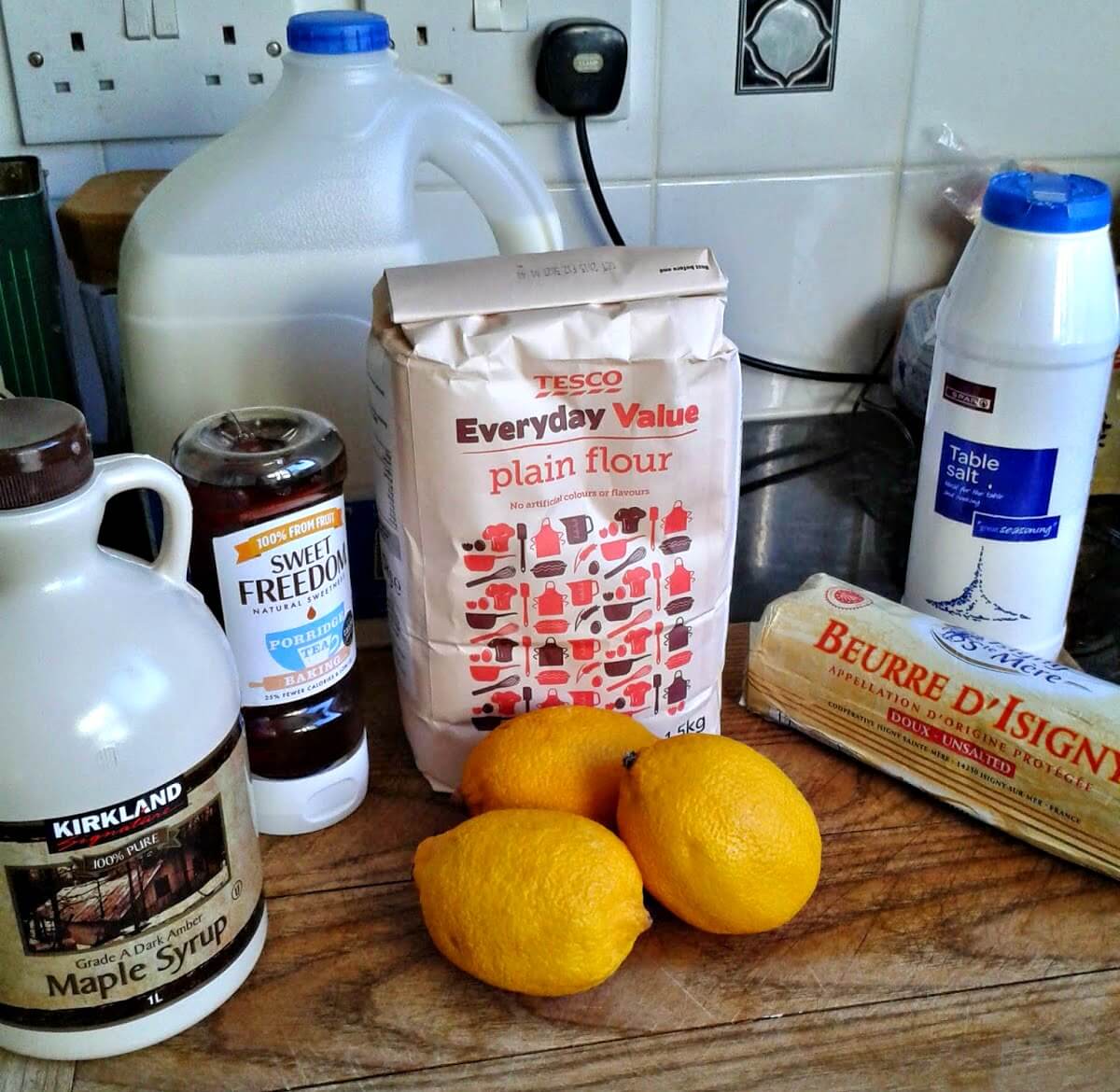 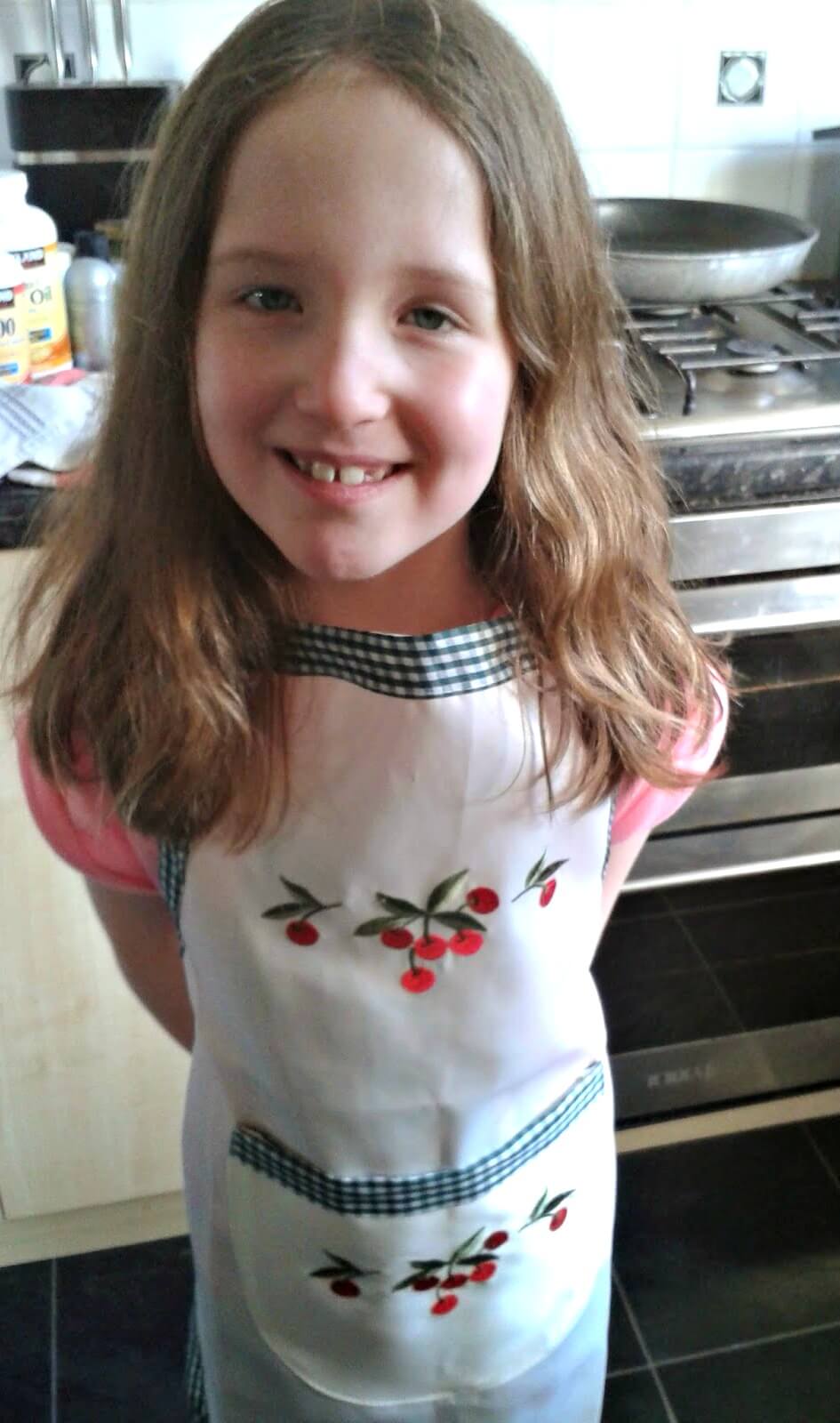 This year, Pancake Day is on Tuesday 7th March so it’s time to get practising. This is the recipe we used, courtesy of Ms Smith.  It looked simple enough and didn’t involve anything green so we gave it a go.  Weren’t the kids cute in those days? 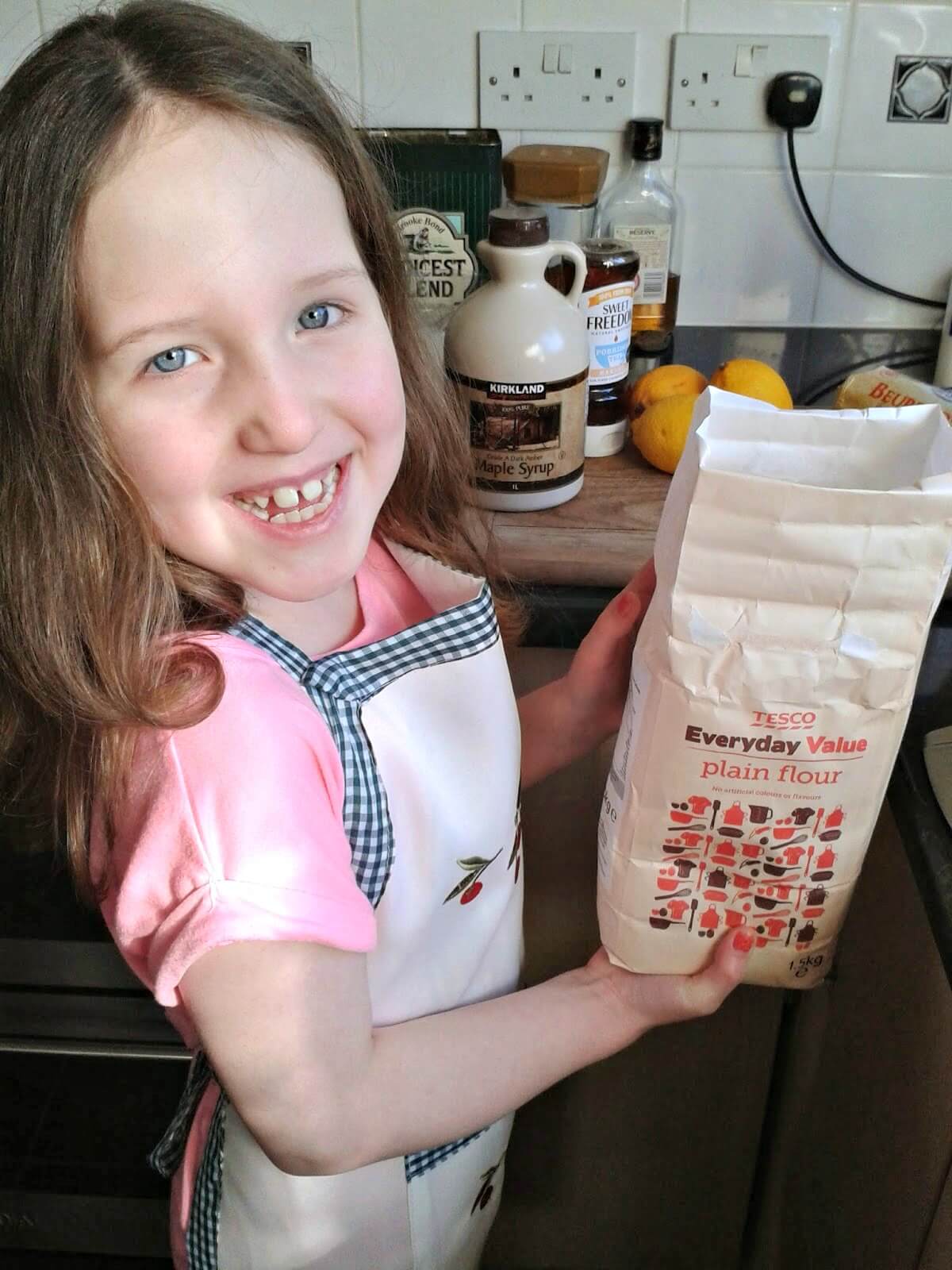 For the pancake mixture 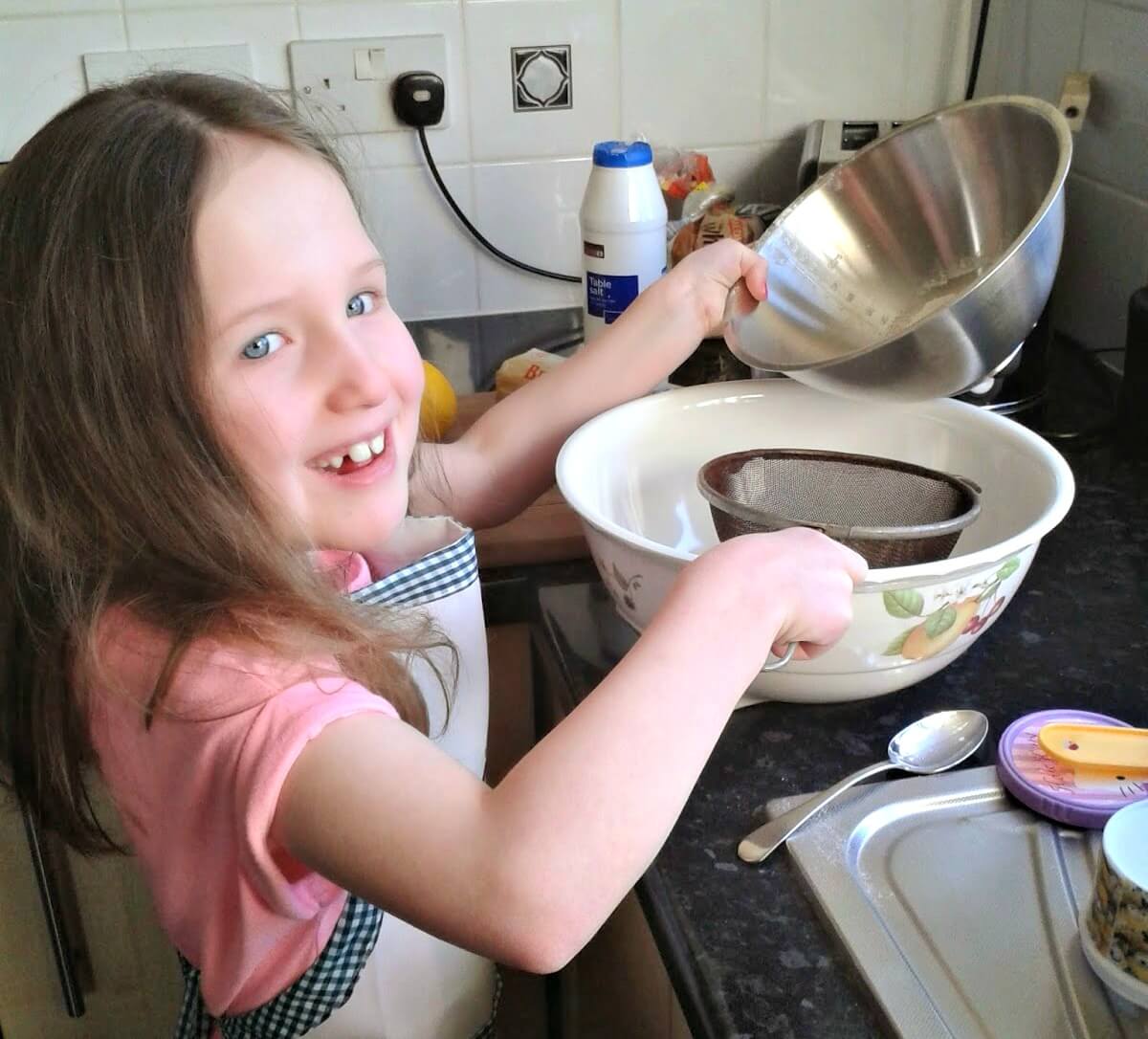 1.  Sift the flour and salt into a large mixing bowl.

2.  Make a well in the centre of the flour and break the eggs into it 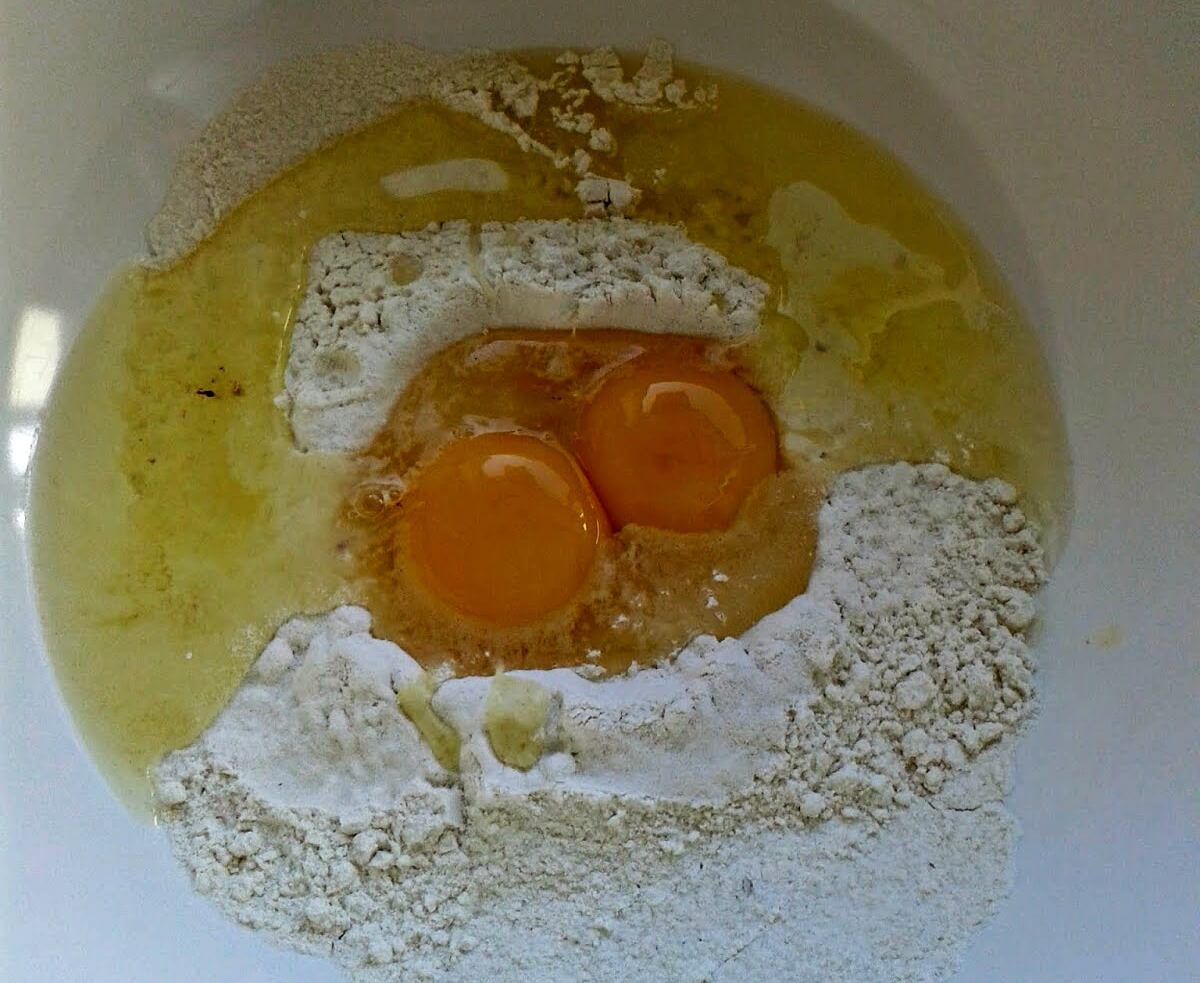 3.  Begin whisking the eggs, including any bits of flour from around the edge of the bowl as you go. 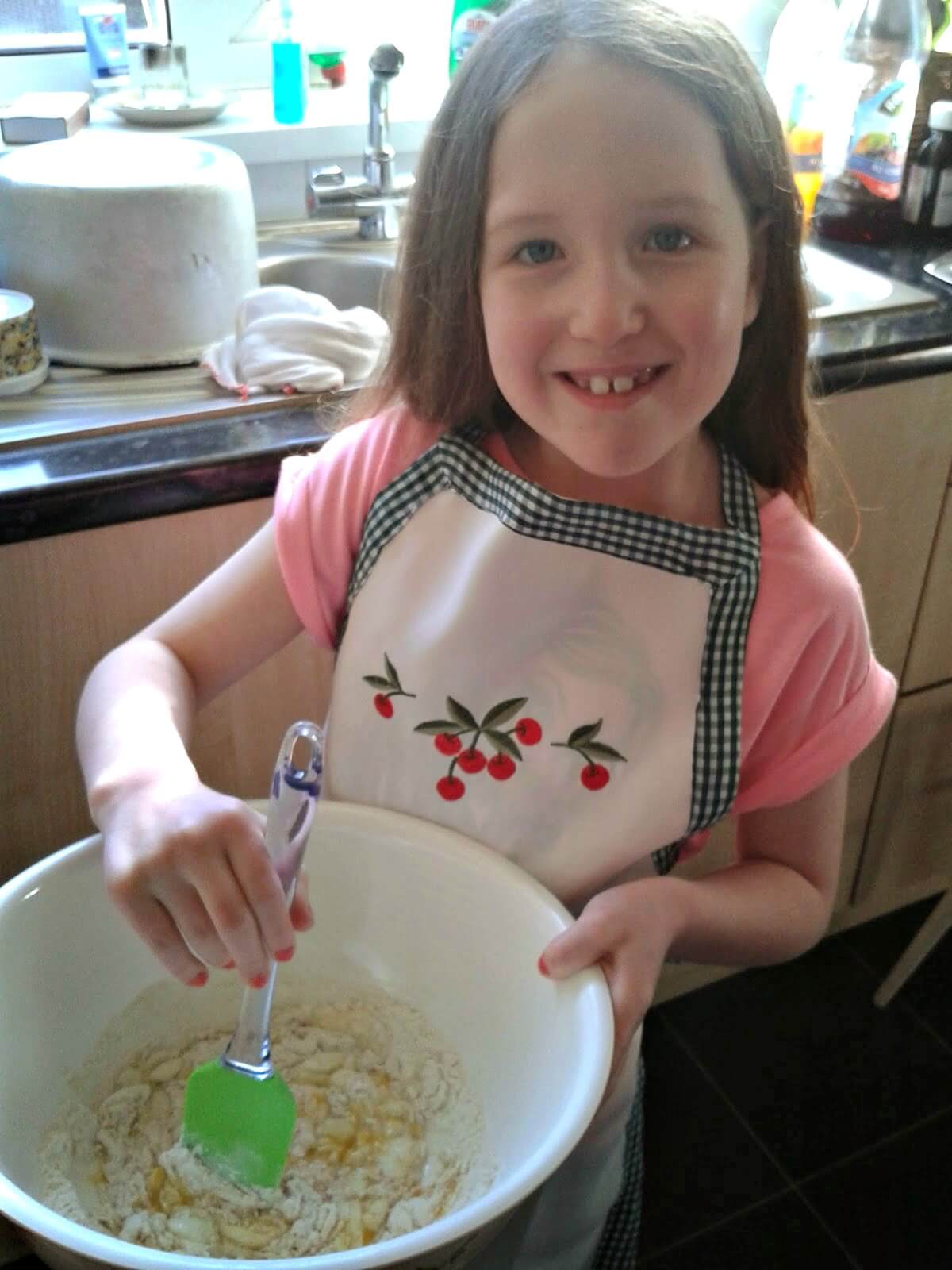 4.  Gradually add small quantities of the milk/water mixture, still whisking to get rid of any lumps.

5.  When all the liquid is added, use a rubber spatula to scrape elusive bits of flour around the edge into the centre, then whisk until the batter is smooth with the consistency of thin cream. 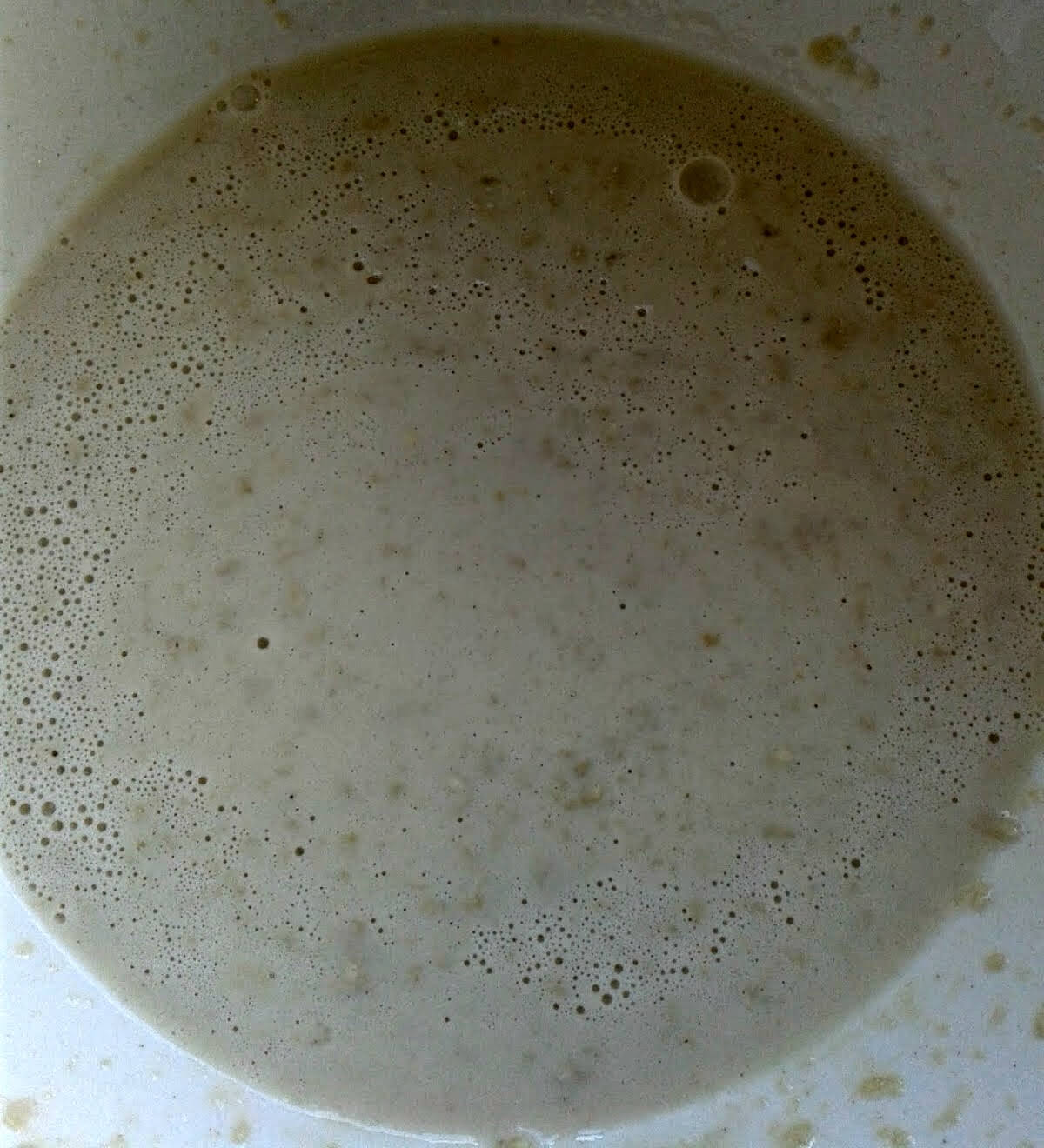 6.   Melt the 50g/ 2oz of butter in a pan and spoon 2 tbsp. of it into the batter and whisk it in.  Pour the rest into a bowl and use it to grease the pan, using a wedge of kitchen paper to smear it around the pan before you make each pancake.

7.  Get the pan really hot, then turn down the heat to medium.  Do a test pancake to gauge the right amount of batter.  Delia suggests 2 tbsp. for an 18cm / 7 in pan but my frying pan is enormous and I found I was using at least 4/5 tbsp. 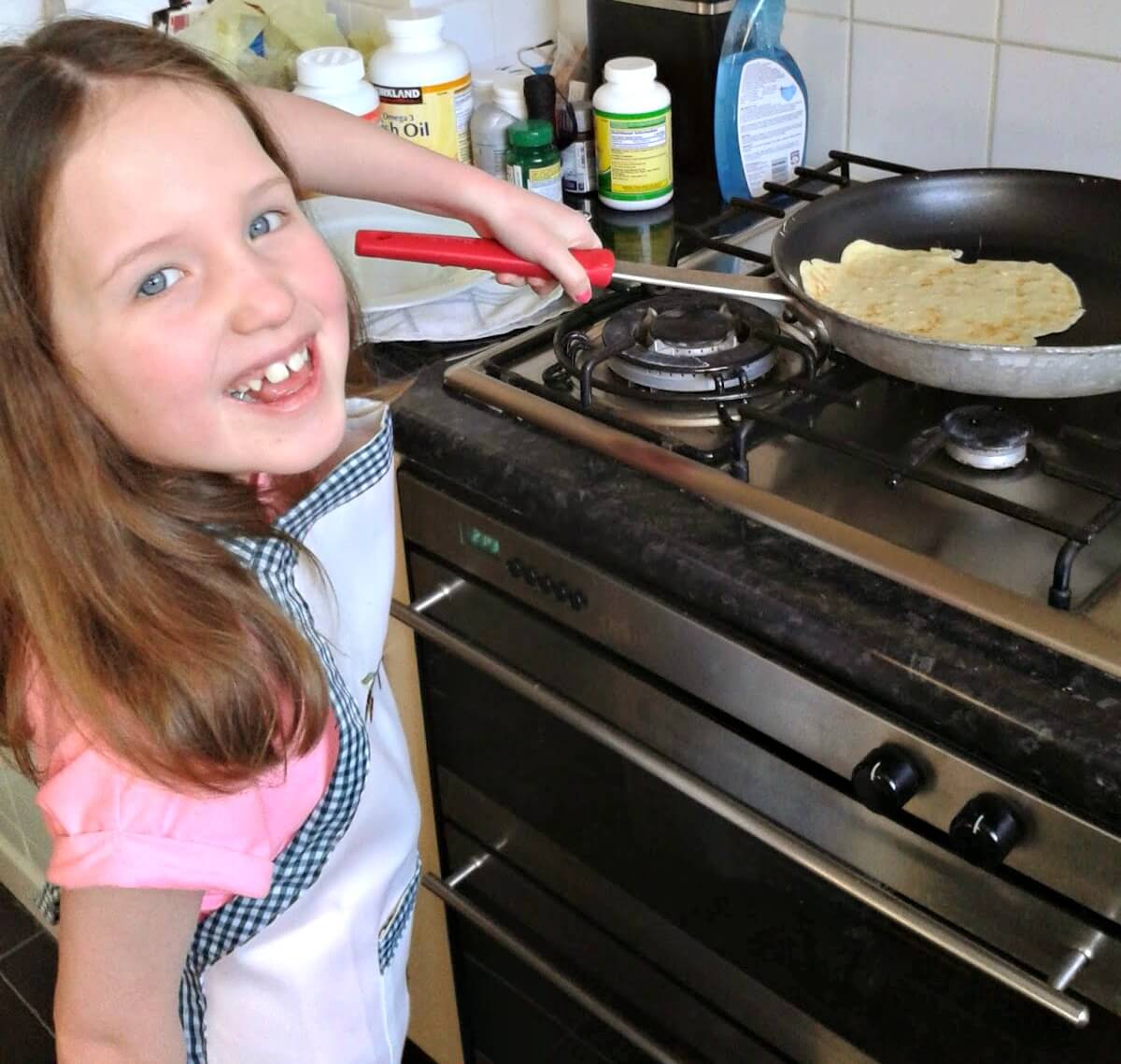 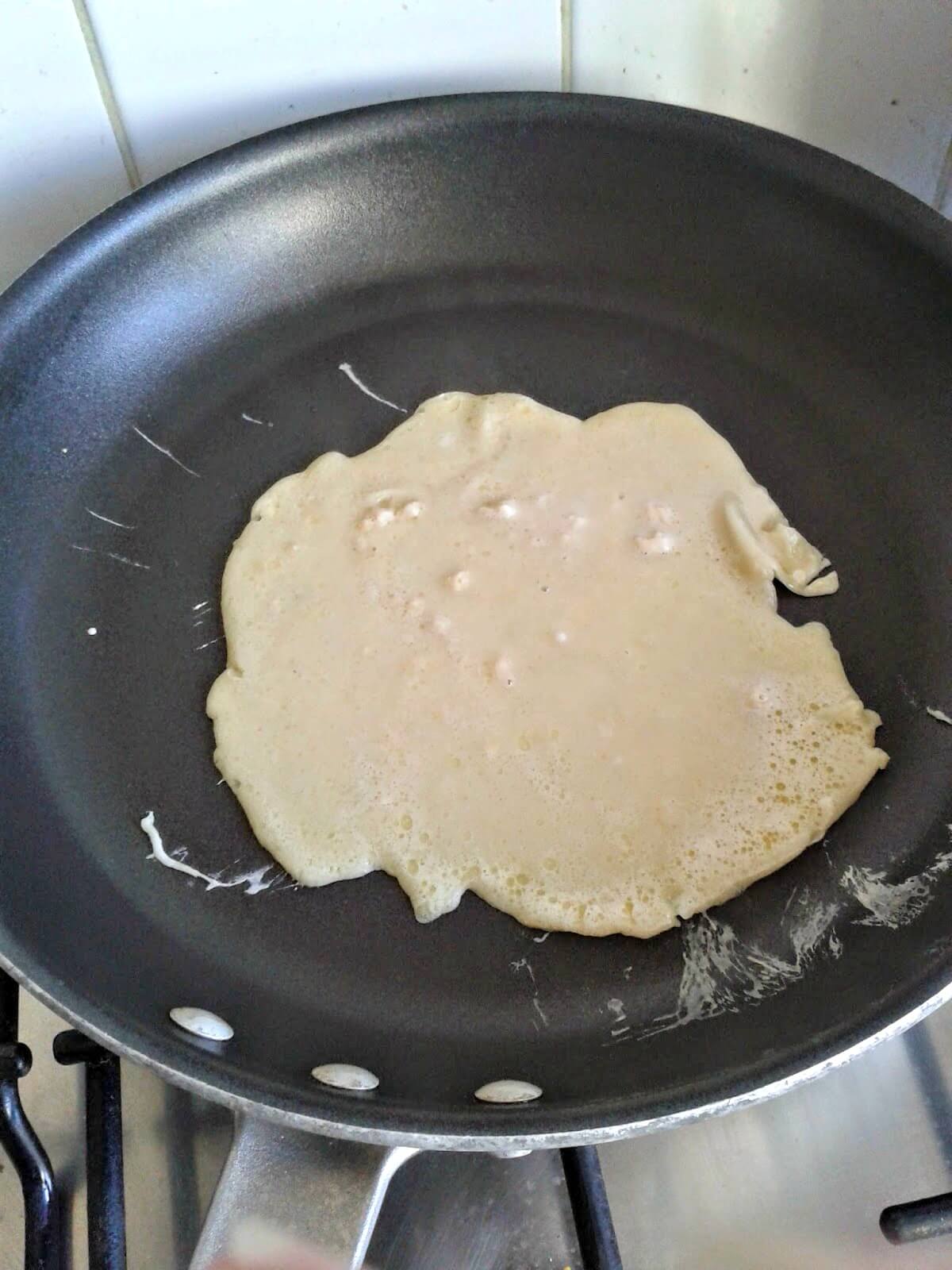 Er,  yup this definitely looks like my usual culinary standard – although it is the test one

Delia suggests it’s easier if you spoon the batter into a ladle so it can be poured into the pan in one go.  The pancake should cook in around 30 seconds but I found it took a couple of minutes in my pan to get the golden colour and slightly crispy edges we love.

8.  Flip the pancake over to cook the other side which should only take a few seconds (again I found it took much longer). 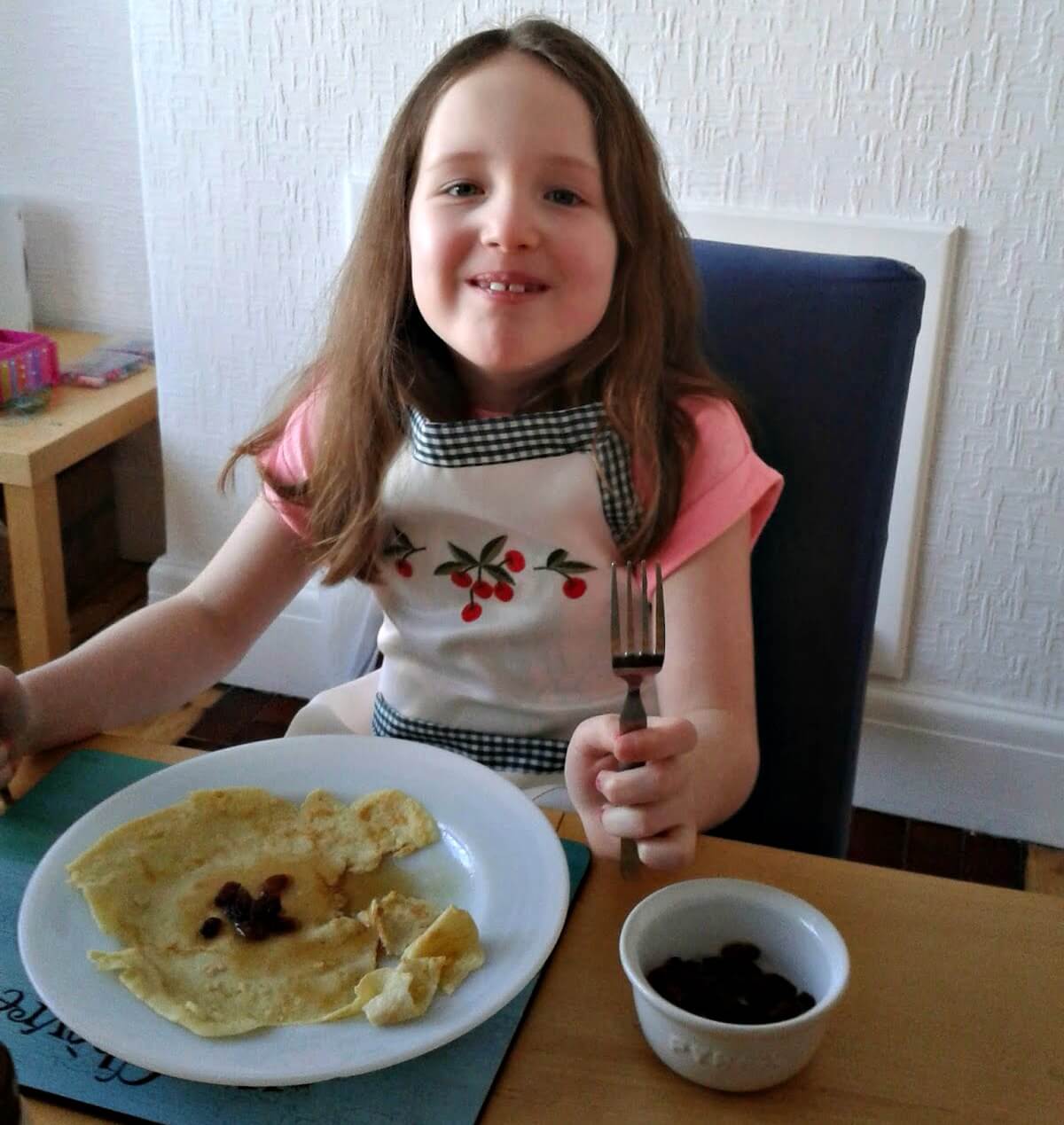 I assembled a selection of sweet treats for the kids to try, including blueberries, sultanas, maple syrup and lemon juice. 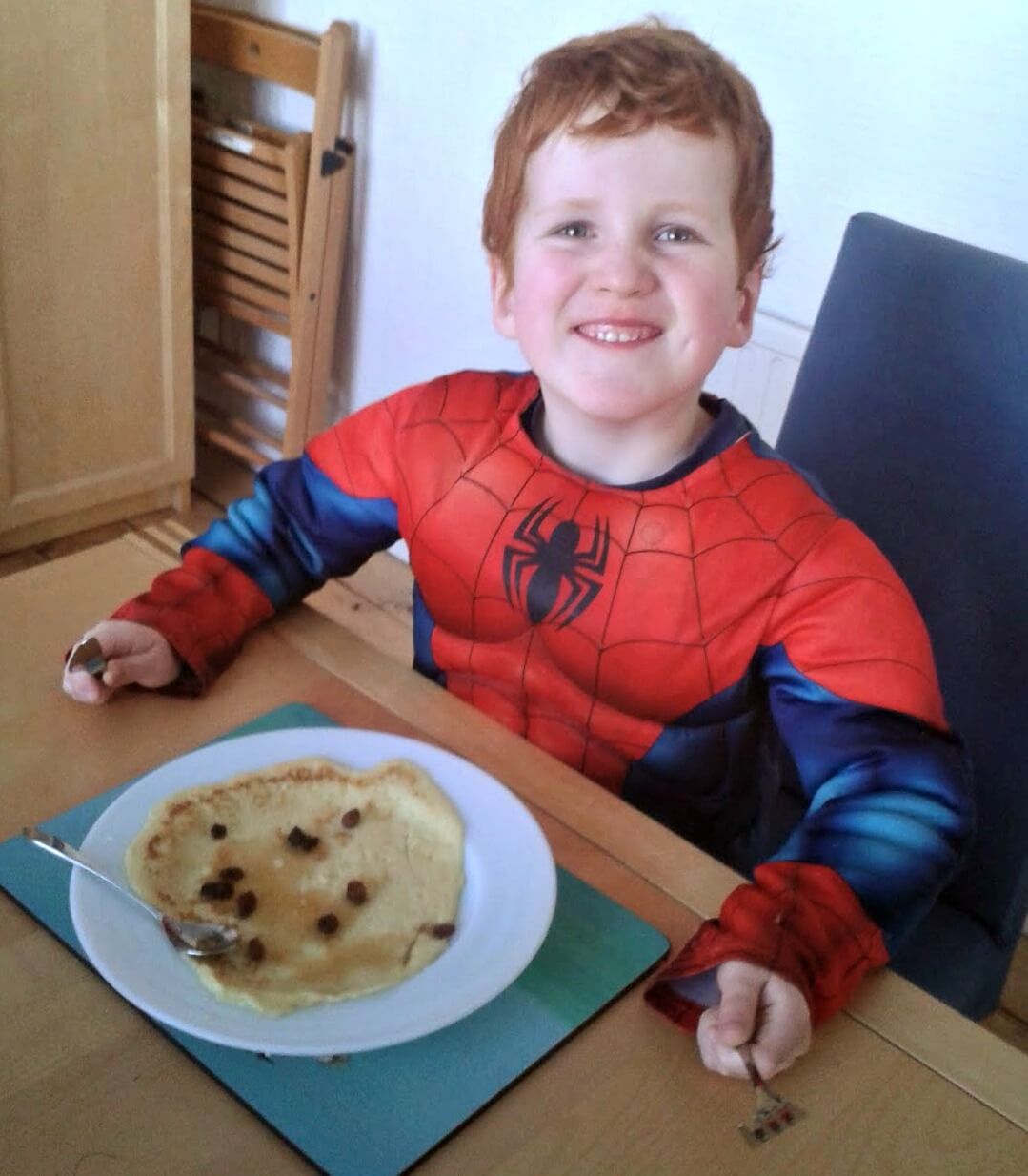 We found the mix made five decent sized pancakes which the kids ate.  No really.  Even Ieuan.  Perhaps the curse of the potato has been lifted.

NB: Caitlin was fully supervised when by the oven and no potatoes were harmed in the construction of the blog post.